#NaPoWriMo Here’s Why W.H. Auden Was The King Of Poetry

This month we are going to share with you our all-time favorite poems, both old and new, tragic and happy, romantic and those that speak of unrequited love.

In celebration of #NaPoWriMo, we have compiled this list of 5 of the best poems by W.H. Auden. This, however, isn’t an exclusive list, but just a list of our favorites.

Stop all the clocks, cut off the telephone,
Prevent the dog from barking with the juicy bone.
Silence the pianos and, with muffled drum,
Bring out the coffin. Let the mourners come.

Let aeroplanes circle moaning overhead
Scribbling in the sky the message: “He is dead!”
Put crepe bows around the white necks of the public doves.
Let the traffic policemen wear black cotton gloves.

He was my north, my south, my east and west,
My working week and Sunday rest,
My noon, my midnight, my talk, my song.
I thought that love would last forever; I was wrong.

The stars are not wanted now; put out every one.
Pack up the moon and dismantle the sun.
Pour away the ocean and sweep up the wood.
For nothing now can ever come to any good.

Now the leaves are falling fast,
Nurse’s flowers will not last;
Nurses to the graves are gone,
And the prams go rolling on.

Whispering neighbours, left and right,
Pluck us from the real delight;
And the active hands must freeze
Lonely on the separate knees.

Dead in hundreds at the back
Follow wooden in our track,
Arms raised stiffly to reprove
In false attitudes of love.

Starving through the leafless wood
Trolls run scolding for their food;
And the nightingale is dumb,
And the angel will not come.

Cold, impossible, ahead
Lifts the mountain’s lovely head
Whose white waterfall could bless
Travellers in their last distress.

Lay your sleeping head, my love,
Human on my faithless arm;
Time and fevers burn away
Individual beauty from
Thoughtful children, and the grave
Proves the child ephemeral:
But in my arms till break of day
Let the living creature lie,
Mortal, guilty, but to me
The entirely beautiful.

Soul and body have no bounds:
To lovers as they lie upon
Her tolerant enchanted slope
In their ordinary swoon,
Grave the vision Venus sends
Of supernatural sympathy,
Universal love and hope;
While an abstract insight wakes
Among the glaciers and the rocks
The hermit’s sensual ecstasy.

Certainty, fidelity
On the stroke of midnight pass
Like vibrations of a bell
And fashionable madmen raise
Their pedantic boring cry;
Every farthing of the cost,
All the dreaded cards foretell,
Shall be paid, but from this night
Not a whisper, not a thought,
Not a kiss nor look be lost.

Beauty, midnight, vision dies:
Let the winds of dawn that blow
Softly round your dreaming head
Such a day of sweetness show
Eye and knocking heart may bless,
Find the mortal world enough;
Noons of dryness see you fed
By the inovluntary powers,
Nights of the insult let you pass
Watched by every human love.

Suggested read: #NaPoWriMo These Poems Will Break Your Heart In The Most Beautiful Of Ways

I
This is the night mail crossing the Border,
Bringing the cheque and the postal order,

Pulling up Beattock, a steady climb:
The gradient’s against her, but she’s on time.

Past cotton-grass and moorland boulder
Shovelling white steam over her shoulder,

Snorting noisily as she passes
Silent miles of wind-bent grasses.

Birds turn their heads as she approaches,
Stare from bushes at her blank-faced coaches.

Sheep-dogs cannot turn her course;
They slumber on with paws across.

In the farm she passes no one wakes,
But a jug in a bedroom gently shakes.

II
Dawn freshens, Her climb is done.
Down towards Glasgow she descends,
Towards the steam tugs yelping down a glade of cranes
Towards the fields of apparatus, the furnaces
Set on the dark plain like gigantic chessmen.
All Scotland waits for her:
In dark glens, beside pale-green lochs
Men long for news.

III
Letters of thanks, letters from banks,
Letters of joy from girl and boy,
Receipted bills and invitations
To inspect new stock or to visit relations,
And applications for situations,
And timid lovers’ declarations,
And gossip, gossip from all the nations,
News circumstantial, news financial,
Letters with holiday snaps to enlarge in,
Letters with faces scrawled on the margin,
Letters from uncles, cousins, and aunts,
Letters to Scotland from the South of France,
Letters of condolence to Highlands and Lowlands
Written on paper of every hue,
The pink, the violet, the white and the blue,
The chatty, the catty, the boring, the adoring,
The cold and official and the heart’s outpouring,
Clever, stupid, short and long,
The typed and the printed and the spelt all wrong.

IV
Thousands are still asleep,
Dreaming of terrifying monsters
Or of friendly tea beside the band in Cranston’s or Crawford’s:

Asleep in working Glasgow, asleep in well-set Edinburgh,
Asleep in granite Aberdeen,
They continue their dreams,
But shall wake soon and hope for letters,
And none will hear the postman’s knock
Without a quickening of the heart,
For who can bear to feel himself forgotten?

He disappeared in the dead of winter:
The brooks were frozen, the airports almost deserted,
The snow disfigured the public statues;
The mercury sank in the mouth of the dying day.
What instruments we have agree
The day of his death was a dark cold day.

Far from his illness
The wolves ran on through the evergreen forests,
The peasant river was untempted by the fashionable quays;
By mourning tongues
The death of the poet was kept from his poems.

But for him it was his last afternoon as himself,
An afternoon of nurses and rumours;
The provinces of his body revolted,
The squares of his mind were empty,
Silence invaded the suburbs,
The current of his feeling failed; he became his admirers.

Now he is scattered among a hundred cities
And wholly given over to unfamiliar affections,
To find his happiness in another kind of wood
And be punished under a foreign code of conscience.
The words of a dead man
Are modified in the guts of the living.

But in the importance and noise of to-morrow
When the brokers are roaring like beasts on the floor of the Bourse,
And the poor have the sufferings to which they are fairly accustomed,
And each in the cell of himself is almost convinced of his freedom,
A few thousand will think of this day
As one thinks of a day when one did something slightly unusual.
What instruments we have agree
The day of his death was a dark cold day.

You were silly like us; your gift survived it all:
The parish of rich women, physical decay,
Yourself. Mad Ireland hurt you into poetry.
Now Ireland has her madness and her weather still,
For poetry makes nothing happen: it survives
In the valley of its making where executives
Would never want to tamper, flows on south
From ranches of isolation and the busy griefs,
Raw towns that we believe and die in; it survives,
A way of happening, a mouth.

Earth, receive an honoured guest:
William Yeats is laid to rest.
Let the Irish vessel lie
Emptied of its poetry.

Time that is intolerant
Of the brave and the innocent,
And indifferent in a week
To a beautiful physique,

Worships language and forgives
Everyone by whom it lives;
Pardons cowardice, conceit,
Lays its honours at their feet.

Time that with this strange excuse
Pardoned Kipling and his views,
And will pardon Paul Claudel,
Pardons him for writing well.

In the nightmare of the dark
All the dogs of Europe bark,
And the living nations wait,
Each sequestered in its hate;

Intellectual disgrace
Stares from every human face,
And the seas of pity lie
Locked and frozen in each eye.

Follow, poet, follow right
To the bottom of the night,
With your unconstraining voice
Still persuade us to rejoice.

With the farming of a verse
Make a vineyard of the curse,
Sing of human unsuccess
In a rapture of distress.

In the deserts of the heart
Let the healing fountains start,
In the prison of his days
Teach the free man how to praise.

This is all we have on today’s post on the Best Poems By W.H. Auden. This is, however, not an exhaustive list, and if we have missed out on some of your favorites, then please feel free to add them in the comment section below. 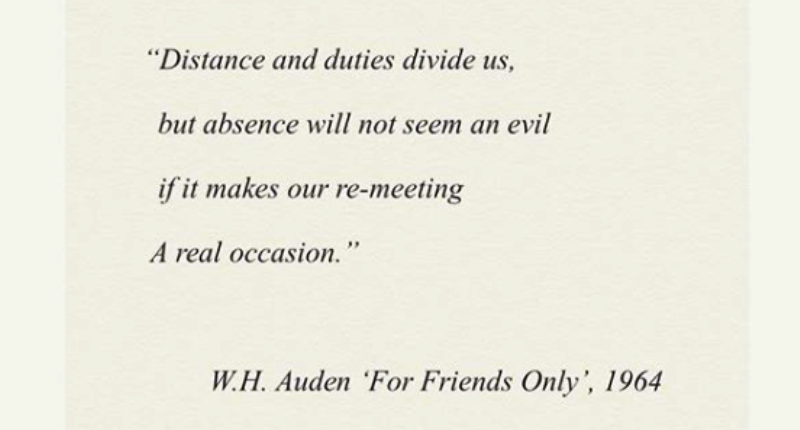 Article Name
5 Best Poems By W.H. Auden, Morrie Schwartz's Favorite Poem
Author
Riya Roy
Description
In celebration of #NaPoWriMo, we have compiled this list of 5 of the best poems by W.H. Auden. This, however, isn’t an exclusive list, but just a list of our favorites.