The King Of Romantic Poetry, P.B. Shelley, And His Creations

One of the greatest poets to have ever lived, Percy Bysshe Shelly was a prominent Romantic poem. The cultural movement of Romanticism that originated in Europe, lasted for almost half a century. Shelley’s poems were controversial for their political messages. 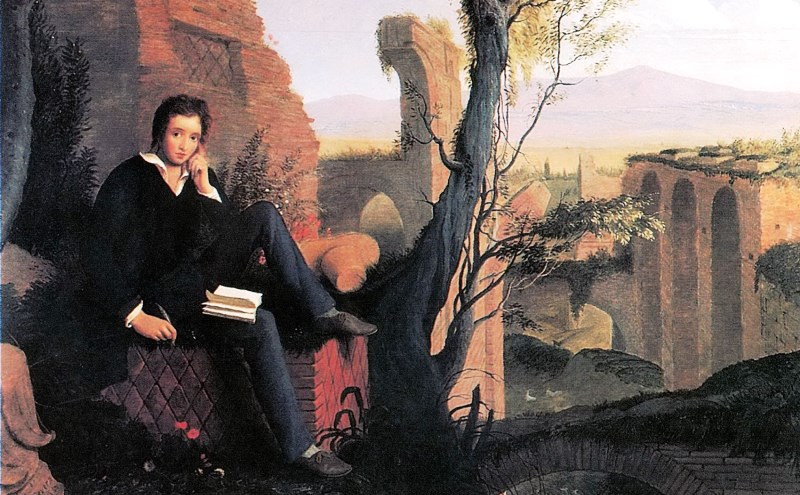 In today’s post, we celebrate the great poet by looking at his 6 best works. We hope you enjoy reading these poems by Percy Bysshe Shelley as much as we loved collating them for you.

Suggested read: Hope Is The Thing With Feathers, And Other Short Poems

I met a traveller from an antique land,

Who said—“Two vast and trunkless legs of stone

Half sunk a shattered visage lies, whose frown,

And wrinkled lip, and sneer of cold command,

Tell that its sculptor well those passions read

Which yet survive, stamped on these lifeless things,

The hand that mocked them, and the heart that fed;

And on the pedestal, these words appear:

“My name is Ozymandias, King of Kings;

Look on my Works, ye Mighty, and despair!”

Nothing beside remains. Round the decay

Of that colossal Wreck, boundless and bare

The lone and level sands stretch far away.

Ozymandias is Egyptian pharaoh Ramses II’s Greek name. The Pharaoh is, till today, considered the most powerful king of Ancient Egypt. In this poem, published in 1818, the speaker is talking about his meeting with a traveler who tells him about a statue with two huge stone legs and a broken head. On the pedestal of the statue, there are the following words engraved: “My name is Ozymandias, king of kings: / Look on my works, ye Mighty, and despair!” He contrasts this with the ruins around, and therefore makes an intense point regarding for power is momentary and that all leaders are bound to decline someday or the other.

This poem is not only one of the best works of Shelley, but also one among the best sonnets ever written.

Princes, the dregs of their dull race, who flow

Through public scorn,—mud from a muddy spring;

Rulers who neither see nor feel nor know,

But leechlike to their fainting country cling

Till they drop, blind in blood, without a blow.

A people starved and stabbed in th’ untilled field;

An army, whom liberticide and prey

Makes as a two-edged sword to all who wield;

Golden and sanguine laws which tempt and slay;

Are graves from which a glorious Phantom may

Burst, to illumine our tempestuous day.

This political sonnet was published in 1839 posthumously. It is a fourteen-line poem that attacks the then ruling class of England. It attacks the royal, the army, the nobility and the senate. When Shelley says, “old, mad, blind, despised, and dying”, he is referring to George III of the UK. He calls the army, “corrupt and dangerous to liberty”, and the laws as, “tempt and slay.” Shelley also assaults religion as “Christless and Godless”. The anger is so palpable throughout the poem, which makes this one of the most acclaimed political sonnets ever written.

If I were a dead leaf thou mightest bear;

If I were a swift cloud to fly with thee;

A wave to pant beneath thy power, and share

The impulse of thy strength, only less free

Than thou, O uncontrollable! If even

I were as in my boyhood, and could be

The comrade of thy wanderings over Heaven,

As then, when to outstrip thy skiey speed

Scarce seem’d a vision; I would ne’er have striven

As thus with thee in prayer in my sore need.

I fall upon the thorns of life! I bleed!

One too like thee: tameless, and swift, and proud.

Undoubtedly the most popular of Shelley’s works, I read this for the first time in Class 8, and loved it right then. This ode consists of five cantos (sections). In the first three, the poet speaks of the powers of the wind. In the next part, which contains 2 cantos, we see how he weaves a relationship between the wind and himself (/the narrator). According to Shelley, a poet could play a revolutionary role in bring about change in society. And therefore, in this poem, he is personifying the wind to be an agent of that change.

Suggested read: 8 Of The Best Contemporary Poets You Should Be Reading

Vibrates in the memory—

Live within the sense they quicken.

Rose leaves, when the rose is dead,

Are heaped for the belovèd’s bed;

And so thy thoughts, when thou art gone,

Love itself shall slumber on.

This poem, too, was published posthumously. It contains two stanzas of four lines each. This poem is considered one among the anthologized poems by the poet. It was first published in Posthumous Poems of Percy Bysshe Shelley with the title “To-”.

The poem is the endurance of memories. It has been turned into music by a number of composers. You might have come across the first and last lines in pop culture.

I bind the Sun’s throne with a burning zone,

And the Moon’s with a girdle of pearl;

The volcanoes are dim, and the stars reel and swim,

When the whirlwinds my banner unfurl.

From cape to cape, with a bridge-like shape,

Over a torrent sea,

The mountains its columns be.

The triumphal arch through which I march

With hurricane, fire, and snow,

When the Powers of the air are chained to my chair,

The sphere-fire above its soft colours wove,

While the moist Earth was laughing below.

This poem is a personification and a metaphor for the how nature is ever-changing. Shelly gives nature power and compares it to the immortal being.

The fields, the lakes, the forests, and the streams,

Ocean, and all the living things that dwell

Within the daedal earth; lightning, and rain,

Earthquake, and fiery flood, and hurricane,

The torpor of the year when feeble dreams

Holds every future leaf and flower; the bound

With which from that detested trance they leap;

The works and ways of man, their death and birth,

And that of him and all that his may be;

All things that move and breathe with toil and sound

Are born and die; revolve, subside, and swell.

Power dwells apart in its tranquillity,

And this, the naked countenance of earth,

On which I gaze, even these primeval mountains

Like snakes that watch their prey, from their far fountains,

Slow rolling on; there, many a precipice

Frost and the Sun in scorn of mortal power

Have pil’d: dome, pyramid, and pinnacle,

A city of death, distinct with many a tower

And wall impregnable of beaming ice.

Yet not a city, but a flood of ruin

Is there, that from the boundaries of the sky

Its destin’d path, or in the mangled soil

Branchless and shatter’d stand; the rocks, drawn down

From yon remotest waste, have overthrown

The limits of the dead and living world,

Never to be reclaim’d. The dwelling-place

Of insects, beasts, and birds, becomes its spoil;

Their food and their retreat for ever gone,

So much of life and joy is lost. The race

Of man flies far in dread; his work and dwelling

And their place is not known. Below, vast caves

Which from those secret chasms in tumult welling

Meet in the vale, and one majestic River,

The breath and blood of distant lands, for ever

Rolls its loud waters to the ocean-waves,

Breathes its swift vapours to the circling air.

Published in 1817, Shelley wrote this during his tour of the Chamonix Valley which offers a stunner of a view of Mont Blanc, the highest mountain in the Alps. This poem is a conversation shared by the mind and nature. The narrator even compares the power of the mountain to the power of human imagination. As you read through, you realize that the main focus of the verse is to show how the human mind is connected to the universe.

That is all we have on today’s post on the best poems by Percy Bysshe Shelley . Did you like what you just read? Let us know in the comment section below.