Spoken Word Poems By Women That Will Lead You To Yourself

“I want her to know that this world is made out of sugar: it can crumble so easily, but don’t be afraid to stick your tongue out and taste it.” (Sarah Kay)

Spoken Word is a relatively new art form. It is poetry combined with theater. According to Kay, Spoken Word poetry is the kind that “refuses to sit on paper”. To me, slam-poetry is an outlet. More than a hobby, it is a way of life. While poetry is a very personal form of expression, Spoken Word lets you take your version of the poetry to the audience. It is therapeutic in too many ways. In the context of female poets, Spoken Word is extremely necessary; besides stanzas, and rhythm, it is a platform and a voice.

Suggested read: These Profound Quotes By Sarah Kay Will Pull At Your Heartstrings

In today’s post, we bring you nine of the best spoken word poems by female artists:

“This is about the self-mutilating circus we have painted ourselves clowns in. About women who will prowl 30 stores in 6 malls to find the right cocktail dress, but haven’t a clue where to find fulfillment or how wear joy, wandering through life shackled to a shopping bag, beneath those 2 pretty syllables.

About men wallowing on bar stools, drearily practicing attraction and everyone who will drift home tonight, crest-fallen because not enough strangers found you suitably f*ckable.”

I discovered this piece of jewel about two years ago. I have gone back to Makkai a million times, because she throws the truth to your face. In this piece, she speaks about plastic surgery, and how her mother felt that the greatest gift she could bestow upon her daughter was a “marketable facade”. She says, “I have not seen my own face for 10 years.”

Body shaming is very real. We’re seven billion people trying to cut ourselves to fit seven billion different standards, forgetting our own. When Makkai speaks about her future daughter, she is in fact speaking to you: “The word pretty is unworthy of everything you will be, and no child of mine will be contained in five letters.”

“Give me a god I can relate to. Commandments from a voice both soft and powerful. Give me one accomplishment of Mary’s that did not involve her vagina.

Give me decisions, a wordless wardrobe, and opinion list dress, give me a city where my body is not public property. Once my friend and I got cat-called on Michigan Avenue, and she said “Fuck you” while I said “Thank you,” like I was trained to.”

Baird makes you uncomfortable in all the right ways. In this poem, she speaks about female privilege; how our whole lives are governed by the “survival of the prettiest”. The lecherous whispers from teachers we trusted, the constant hungry glances that our morality has become numb to, the cat-calling, the fear, and everything it means to survive as a woman.

“Maybe this is why my house feels bigger each time I return; it’s proportional.

As she shrinks the space around her seems increasingly vast.

She wanes while my father waxes…

…It was the same with his parents;

as my grandmother became frail and angular her husband swelled to red round cheeks, round stomach
and I wonder if my lineage is one of women shrinking
making space for the entrance of men into their lives

not knowing how to fill it back up once they leave.”

This poem woke me up. Myers has a very calm way of performing poetry. There is hardly any outrage in her actions or her voice. But the piece itself will tear you to shreds. Women are synonymous with compromise. Even today, sacrifice is closely associated with the mother’s nature. In a champion observation, Myers speaks about how women shrink so that men may grow. If you look closely at your family, run your fingers along your lineage, you will see how this poem was written for each one of us.

4. Explaining Depression To My Mother by Sabrina Benaim

When I see a candle, I see the flesh of a church. The flicker of a flame sparks of a memory younger than noon. I am standing beside her open casket. It is the moment I learn every person I ever come to know will some day die. Besides, Mom, I’m not afraid of the dark.

Perhaps that’s part of the problem.”

Benaim understands helplessness. This piece is ripe with contradictions and chaos, just like the mind of a depression patient. She speaks about how mental issues exist in groups: “Anxiety is the cousin visiting from out of town depression felt obligated to bring to the party.” Benaim efficiently articulates the need for social validation, but the inability to get out of bed; the helplessness of not being the owner of your own mind; explaining a kind of chaos that rips poetry apart.

You’re the reason we stay in the closet.

You’re the reason we even have a closet.

I don’t like closets, but you made the living room an unshared space

and now I’m feeling like a guest in my own house.”

Frohman is an inspiration. She’s one of those rare specimens who take their ‘weakness’ and turn it into their armour. In this piece, she addresses a room full of straight people, asking them: “Why do you have to stare at me when I’m holding my girlfriend’s hand like I’m about to rob you?” She fights questions about her sexuality by questioning their straight-ness: “Did it happen because your parents are divorced?” In fact, she doesn’t even spare God: “I don’t think God has a sexual orientation,/ but if she were straight, she’d be a dope ally./ Why else would she invent rainbows?” Frohman is unapologetically magical.

This poem is very close to my heart, for one primary reason: It speaks about how women are pitted against one another. Throughout our lives, we are made to live in comparison with our own kind. Somehow, we are made to feel proud of being prettier, more qualified, fairer, wealthier, or even more desirable than another woman. The world has a market that thrives on our lack of solidarity, and it is a disgrace. Johnson took a stand for her own race, her own kind, and it makes me really proud. She says that she may have a lighter skin tone, or better skills in conversation, but when you tell her she is “not the average black girl”, she says: “I can only aspire to be.”

This piece was performed at the since-discontinued The Queen Latifah Show. The teenage trio set fire to the stage with their concept of American privilege. I remember not too long ago, America raised hue and cry over Kinder Joy. They wanted to ban the food item as it has a small toy within it that a child could choke on. In this poem, the trio speak passionately about gun laws in a segment. They mention Catcher In The Rye and a gun, pointing out that only one of the two are banned in America. It’s one of the best spoken word poems, and a real eye-opener.

8. Say No by Megan Falley and Olivia Gatwood

“This is for the woman who says no:

They will boo you as you run down the stadium steps
because it will never be the wedding aisle.

Someone will throw popcorn at you
because it will never be rice, or confetti.

Someone will catch your wrist
because it will never be a bouquet.

They will curse the day you learned any other words

besides yes and sorry.”

“There’ll be days like this, my momma said. When you open your hands to catch and wind up with only blisters and bruises; when you step out of the phone booth and try to fly and the very people you want to save are the ones standing on your cape; when your boots will fill with rain, and you’ll be up to your knees in disappointment. And those are the very days you have all the more reason to say thank you.

Sarah Kay is where my love for Spoken Word began. Irrespective of what she writes about, her poetry always symbolizes hope. This piece is a part of her Ted talk (which is a wonder in itself), and takes me back to my roots. Kay has witnessed magic, time and again, and she believes that there’s enough for all of us. She says “Point B’. “that way, no matter what happens, at least she can always find her way to me.” This piece, is homecoming.

To me, these are some of the best spoken word poems to have existed. I hope you found the same magic I did, when I lost myself in these lines. Poetry, somewhere, is a contradiction: of truth and deception, of the real and the imaginary, of comfort and outrage. Most of all, poetry for me, is a home I carry in my pockets. I hope it leads you to yourself.

“You’ve got a heart as loud as lightning

So why let your voice be tamed?” (Emili Sande) 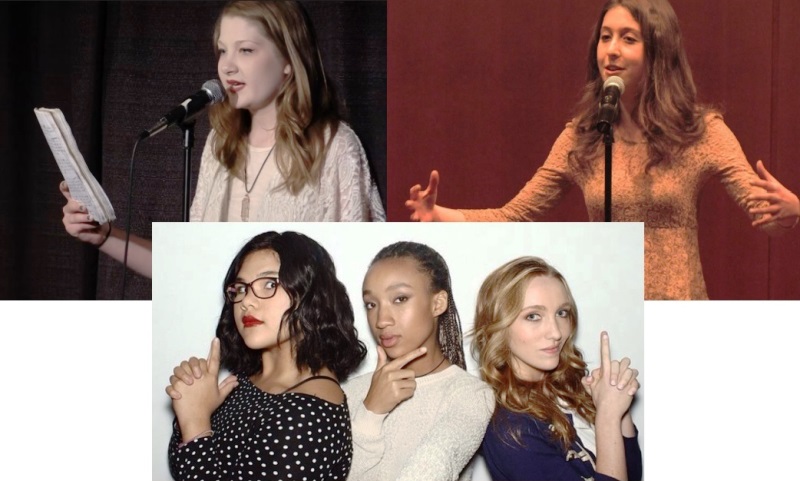 Article Name
9 Best Spoken Word Poems By Women You Need To Watch Right Now
Author
Meghalee Mitra
Description
Poetry for me, is a home I carry in my pockets. And so, I'm sharing 9 best spoken word poems by women, hoping that it leads you to yourself.