Even though the first instance of organized feminism occurred in 1848 in America, it has since then, only gained momentum and popularity as more and more women have become outspoken about their birth rights, and their right to equal opportunity with men. There are a number of famous feminists in history like Mary Wollstonecraft, Sojourner Truth, Simone de Beauvoir, etc. However, there are some feminists from the modern world who are no led inspirational that these women from history. 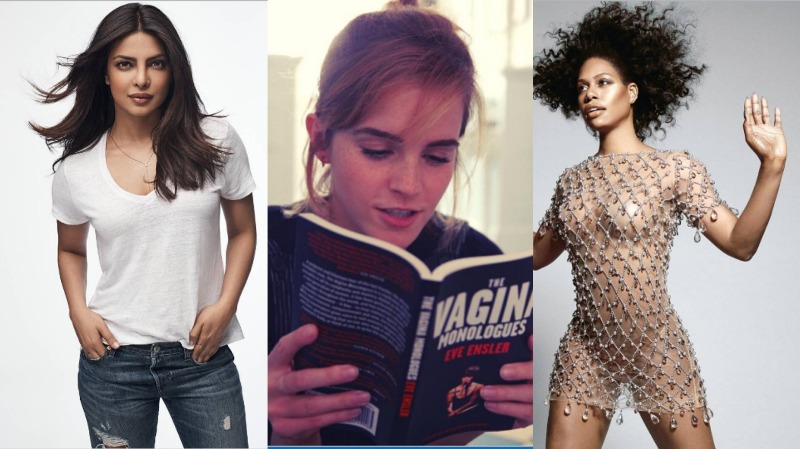 A lot of the names on this list are part of the popular culture, but the reason for their inclusion is the fact that they use their fame and their widespread outreach to promote the right cause, and educate people about the power and position of women. The empowerment embodied by these people is the source of inspiration for a lot of young, impressionable and old people out there, who tend to enumerate the believes and values of these famous people that they idealize.

Even if they are not part of the popular culture, they are responsible in some way or the other for revolutionizing the way women are treated and perceived, becoming some of the biggest modern icons of feminism. Here is a list of such people that everyone should look up to!

Amanda Palmer is one of the most outspoken and awesome feminists that the world has been blessed with. Although she is a controversial figure, it is also true that no radical and empowered female in history has gone without being at the centre of criticism and controversy.

Even though I could go on and on about her highly progressive stance on feminism, here is her ideology in her own words:

the most powerful feminist can do WHATEVER SHE WANTS.

THAT IS WHAT DEFINES A TRUE FEMINIST.

this includes: wearing heels, wearing combat boots, wearing nothing, sporting lipstick, shaving, not shaving, waxing, not waxing, being political, being apolitical, having a job, being homeless, gazing at men, gazing at women, gazing at porn of all sorts, glamming up like a drag queen, going in man-drag, being in a five-way polyamorous relationship, being childless, being a stay-at-home parent, being single, having a wife, having a husband, and gazing/cooing adoringly at those wives or husbands anywhere they f*cking choose, including elevators, restaurants, puppet shows (well, maybe keep it g-rated if there are small children present), ….or on theatrical stages at fringe festivals. are we getting the picture here?? The most powerful feminist can do WHATEVER SHE WANTS. the minute you believe you’re a “bad feminist” because you said the wrong thing/wore the wrong thing/got married/chose to have children…or otherwise broke some unspecified ”code of feminism”: DON’T BUY IT. THERE ISN’T ONE. You can do ANYTHING YOU WANT. ANYTHING. THAT’S THE POINT.

If this isn’t iconic, I don’t know what is.

Toni Morrison is one of the most well-known novelists of the time, and is sure to go down in history as one of the greats. Although she doesn’t openly call herself a feminist because she is averse to labels, she had this to say:

I don’t subscribe to patriarchy, and I don’t think it should be substituted with matriarchy. I think it’s a question of equitable access, and opening doors to all sorts of things.

She has written novels like Beloved, Sula and The Bluest Eye, for which she has won multiple awards like the Pulitzer Prize and the Nobel Prize for literature. Being a woman of colour, she is has emerged as one of the pioneers of feminism in the modern world, shaping the course and nature of the movement and literature alike.

Suggested read: The Next Time They Dismiss Feminism In These Ways, Here’s How You Should Respond

Emma Watson has certainly grown up from her Harry Potter days, when she used to be Hermione and the world used a single adjective to describes her (character)- “bossy.” Now, she has shown everyone that she isn’t bossy, but is in fact, the boss. In an attempt to dissipate the myth that feminists hate men, she started the “He for She” campaign to give men a chance to show their support for feminism.

In an interview she gave to Buzzfeed, she said:

We think that we live in a post-feminist society, and we do not. We’re told we don’t need feminism anymore, that we have the vote, that like, we’re all good, and I think, actually, that’s incredibly disconcerting because then, when young women move into the world and they realise, ‘Oh, why am I not being paid the same, why am I being treated differently?’ And they start to blame themselves because they don’t understand that they’re part of a historic pattern, they’re part of a much larger system which is kind of working a little bit against them.

It is safe to say that she is one of the most famous feminists of the modern world, soon to become an icon of the movement.

Ellen Page is one of the most celebrated and talented actresses of this generation, who calls herself the “tiny Canadian”. She was recently lauded for coming out as bisexual in front of a live audience and has forever advocated for the equal rights of women and the LGBT community. When asked about why so many of her peers and fellow celebrities are afraid of calling themselves feminists in an interview with The Guardian, she said,

I don’t know why people are so reluctant to say they’re feminists. Maybe some women just don’t care. But how could it be any more obvious that we still live in a patriarchal world when feminism is a bad word.

Lavern Cox is not only a champion for feminism for the current generation, but she is also one of the icons of the LGBT movement and intersectional feminism and racial equality. Despite being a transgender woman of color, despite being humiliated, embarrassed and told down through most part of her early life, she has managed to become of the most well-known people in the world, showing young women that there is nothing stopping the from achieving their dreams. When asked about other people refusing to call her a feminist, she said:

We’re talking about separatist feminists—like they don’t believe that trans women are women. It’s a very retrograde kind of feminism where there is an essentialized idea of womanhood. I think anti-essentialist feminists have had this conversation. But the reality is that trans women are being excluded from a lot of women’s spaces throughout the country because of that. I think it’s really just, “Who is a woman? And are we just our bodies? Are we just our ovaries or lack thereof?” And womanhood is so much more complicated than that.

Whether it is advocating for the equal rights of women, or campaigning for equal pay for equal work, or dissolving racial barriers in Hollywood by emerging as one of the most popular and fiercest brown actresses Hollywood has ever seen, Priyanka Chopra has is all covered. Even though a lot of her co-workers are afraid of calling themselves feminists, she has fearlessly gone about schooling people about the importance of feminism, and why both men and women need it. In an interview with Times of India she said,

Feminism needs men to understand that we don’t want to berate you or kill you or hate you. We just need you to stand by us.

Suggested read: 12 Reading Resolutions For A Feminist By A Feminist

Alicia Keys is already an iconic singer, who has made an indelible impression on several generations. However, she is also an iconic feminist, because of the radical decision to give up makeup, in a day and age where women are forced to look a certain way and subscribe to the patriarchal standards of beauty to appear desirable. To flout something that is widely accepted as the norm, and do something that is considered radical and independent as a woman is all the feminism that youngsters need to be brave, to perform their own acts of dissent. She has openly spoken about owning one’s power as a woman, and embracing your inherent, natural and beautiful womanhood. Speaking to Elle UK, she said,

Look the definition up because I have in my mind what I feel it means…’The advocacy of women’s rights on the ground of political, social and economic equality’ – so yes. Yes, I am a feminist, and whoever isn’t, is crazy. It’s about owning your power, embracing your womanhood.

There are a lot of other famous feminists, and all of them have been working towards the empowerment of women by “breaking the rules” in their own ways. They are beacons of hope and icons of inspiration for an entire generation of women and men all over the world who are trying to understand what feminism is, and what it entails.