Adult stars may get down and dirty on camera for a living, but they’re regular individuals just like the next person, who’d like to date. And some of them are on Tinder!

And these stars shared foolproof dating advice that are applicable to all men, whether on Tinder or any other dating app. Four stars – Dana Dearmond, Anikka Albrite, Skin Diamond, and Penny Pax – shared their pearls of wisdom in a four-minute video produced by Simple Pickup, which is a YouTube Channel, which helps men in attracting women. 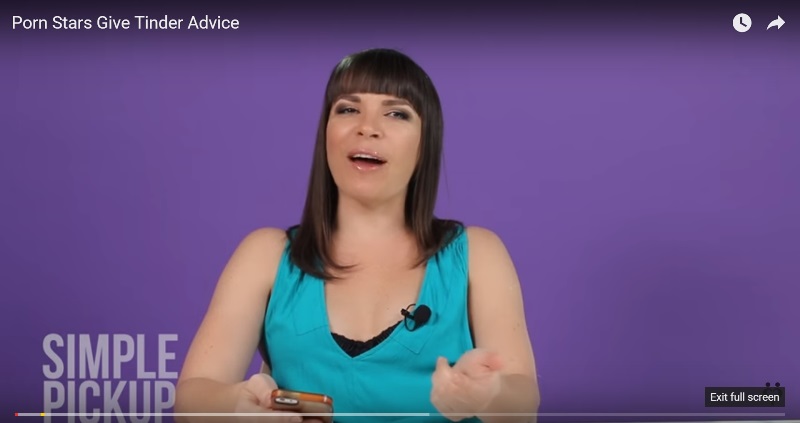 So, without further ado, let’s get to the dos and don’ts of online dating – as revealed by four adult stars:

Doesn’t matter if you’ve got killer abs. That just makes you look like you have no actual friends who can take pictures for you.

2. Don’t upload photos of you with kids.

Whether they’re your nieces or nephews, don’t post them on the Internet. First of all, they are kids and are not in a position to have a say whether or not they want their pictures on the Internet. Secondly, Tinder is a hookup app at its worst and a dating app at its best. It’s no place for kids.

It’s just a waste of time. There’s nothing but disappointment in store for you.

It’s not a bad thing per se, but it kind of implies that you’d only like to go out with other vegans, and that your vegan lifestyle is something that you’ll probably bring up a lot in conversations. It’s a downer.

Suggested read: 10 types of men you should think hard before dating

While pictures of your nieces and nephews are a no-no, your pets are adorable and you own them. Also, everyone loves pets.

2. Do use emoji while chatting up a potential match.

Who can resist the charm of a cat face emoji? Just put one on each side of your name and you are guaranteed to get a reply for being so cute! Pizza slices also come highly recommended.

Own your inner geek like a boss – whether you stay up all night watching Doctor Who or work in gaming. It’s bound to come up in conversation, and some people are going to love that about you.

So, now that you’re equipped with all the dating advice for Tinder dating, go all out and get swiping! 😉

Article Name
Adult Stars Share Foolproof Dating Advice For Men To Attract Women On Tinder
Author
Chaitra Ramalingegowda
Description
Adult stars share dating advice for men so that they can attract women on Tinder. Read on to know more of the dos and don'ts of Tinder dating.