Would you cuddle a stranger? Well, Cuddlr – a new app, is here to achieve just that!

These days, it seems like there’s an app for everything under the sun – an app to monitor your heartbeat, to one that tells you how many calories are in a plate of food, to one that reminds you to buy gifts for a girlfriend, to one that helps married people have an extramarital affair, to one that promises to present you with potential mates, after weeding out ‘the poor and the unattractive’!

So why not an app that matches you with people nearby, who just want to cuddle? It is exactly what it sounds like – Cuddlr. If simple, uncomplicated and platonic hugs and cuddles are what you’re looking for, then this is the app for you, which helps you connect with similar people. Calling itself a “location-based social-meeting app for cuddling,” this is the newest offering from the innovators of the tech world. Cuddlr was released on September 18th, and has apparently amassed more than 130,000 users since.

Though its functionality resembles apps like Tinder, the app’s co-founder Charlie Williams said that Cuddlr is inherently different. “Those are hook-up apps, but that’s not always what people want to do,” he said. “This is about connecting with another person, but not sexually.” 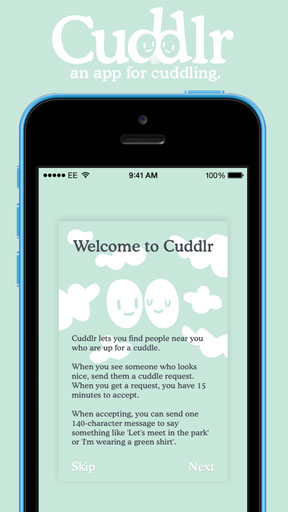 Like most dating apps, even on Cuddlr, a user has to create a profile with their name, location, and photograph. Then they can search for others nearby, who are looking to cuddle. A user can send a cuddle request when they find someone they’d like to cuddle with. For two mutually interested Cuddlr users, there is an option to message each other and set up a meeting. The app also gives walking directions to the two users who have decided to have a cuddle session. Apart from the basic details such as first name, photograph, and their location, a user’s profile also shows any successful and/or problematic past cuddles (if any). 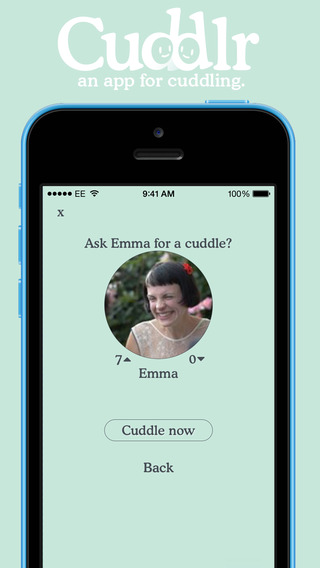 The app’s developers said, “It’s a way of finding people near you who are up for a cuddle, without any pressure or expectation.”  Adding, “Our culture doesn’t have a space for closeness without pressure. The way we talk about meeting and sharing space and contact with someone assumes that it’s centered explicitly around sex and dating, or based on the kind of affection a parent might show a child. We’re not getting the right type of contact often enough; we don’t give and get enough hugs.”

“Hooking up is certainly not always a bad thing, but there’s definitely an under-explored time and a place for a more gentle, no-pressure intimacy, and that’s what Cuddlr aims to help with.”

The app’s intro warns off potential perverts and creeps, and clearly cites its purpose: “Unlike some other apps, Cuddlr is strictly about PG-rated experiences. Keep the cuddle a cuddle!” 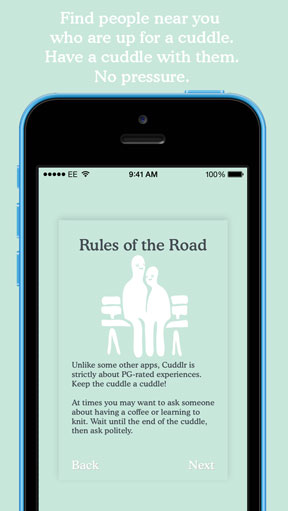 A cuddle session could be anywhere – lying in a park, or window shopping, or just hugging – following which you can rate the user’s cuddling skills, with an up or down voting system. The website says, “Once you meet and have a cuddle, you can give a thumbs-up if everything went ok, or in the event of a somewhat too-grabby cuddle, you can report the user. The app also lets you share a picture of the cuddle, and, when you’re ready, you can ask for another cuddle through Cuddlr.”

The Cuddlr team has the right to ban people who are seen as taking advantage of the people on the site, and the users too can block anyone at any time. And the blocking is mutual – you won’t see them, and they won’t see you.

If, during a cuddle session, a user feels the need to explore something more than a platonic cuddle, they can exchange numbers, but nothing will happen during that meeting. They can take it forward on their own time.

The app currently doesn’t feature any filters for age or gender. It is available for iOS, but Charlie, the founder said that an Android version is in the works, which would most probably be ready to be launched next year.