“If they give you ruled paper, write the other way.”
– Juan Ramón Jiménez

This is the epigraph of Ray Bradury’s ‘Fahrenheit 451’. Originally titled ‘The Firemen’, the novel is set in a dystopic world where books are banned, and firemen set fire to the remaining vestiges. The present title ‘Fahrenheit 451’ is the spine that the story rests on, because it is at this particular temperature that pages catch fire.

Published in 1953, Bradbury has refused to contain his narrative within a frame of time. This only serves to prove that the essence of the book- the cycle of creation and destruction, the duality of identity, the evil of status quo, et all- is perpetual. While the heightened use of technology makes us assume that the narrative is futuristic, the motifs and emotions are primal. At first glance, the world of Montag appears to be set far in the future, or restricted to some regressive past. But as we flip through the pages we understand that Montag exists within all of us.

Rich in literary allusion, combining the themes of classic treatises, and ample aphorisms, this novel, with its easy language, and fast-paced action, will leave a lasting impact on anybody looking for literary treasure. Bradbury brings us a thrilling story, but what makes the novel immortal is the sense of hope; a thread of belief that promises you that all is not over, yet. 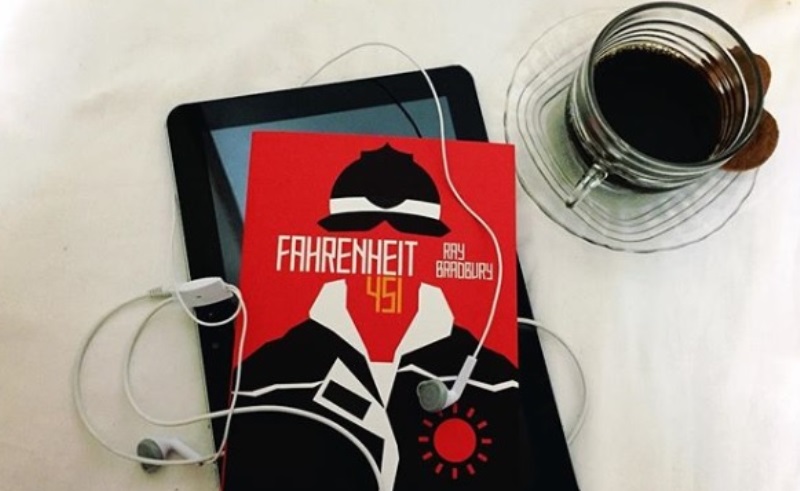 Disclaimer: The novel in discussion can be read in twenty different ways. There are innumerable themes and motifs to be traced from its pages. In order to secure the last vestiges of my sanity, and not give away spoilers, I have only discussed a few themes which I prioritized among many.

Alienation and the crime of being different

“Well, after all, this is the age of the disposable tissue. Blow your nose on a person, wad them, flush them away, reach for another, blow wad flush. Everyone using everyone else’s coattails.”

In the light of rampant individualization, can you afford to trust the person beside you? Guy Montag feigns illness in order to hide a book that he stole from the site. He is constantly ridden with anxiety throughout Beatty’s visit, lest his crime should be discovered.

“Mother died today. Or maybe yesterday; I can’t be sure.” – these are the opening lines of Albert Camus’, ‘The Outsider’ (1942). The inability to notice, to feel, to express, are all common traits in a social setting that beckons spine-breaking productivity and ruthless antagonism. You are taught to step on each other in order to climb the ladder. While we rant and rave, curse and quarrel, dictate and destroy- none of us have an inkling of an idea about why and who we trample upon. And, most importantly, for what?

In Black Mirror S03e05, ‘Men Against Fire‘, Charlie Brooker’s script revolves around how we dehumanize our opponents in order to wage war against them. We find the tiniest things to discriminate against, and the silliest excuse to destroy. In Montag’s world, “the word ‘intellectual,’ of course, became the swear word it deserved to be.”

Published in 1937, Ayn Rand’s novella ‘Anthem’, is an invaluable discourse on the fatal consequences of being unique. While 100% of all motivational speeches labor towards making you feel like a special snowflake, it is actually that very quality that sets you at loggerheads with the ones in power. It is much easier to rule over a bunch of people who obey the same rules, have the same habits, work in a similar pattern, and respond to the same call.

“We are one in all and all in one.
There are no men but only the great WE,
One, indivisible and forever.”

Bradbury too, in his narrative, traces the transformation of a man from Fireman to fugitive, simply because he chose to be different.

War and the Death of Empathy

There is a war brewing in the background of the narrative. Here, again, Bradbury has deliberately omitted the exact details of the conflict. Who are the fighting parties? What are they fighting over? The lack of a reference point in time has left us unable to correctly pinpoint the nature of the war in question. It could be the World Wars, since the novel was published nine years after the end of WWII, or it could be a future war that Bradbury envisioned.

The universal nature of the prose urges us to believe that the war is perpetual. In Edwin Brock’s poem, ‘Five Ways to Kill a Man‘, he writes:

“These are, as I began, cumbersome ways
to kill a man. Simpler, direct, and much more neat
is to see that he is living somewhere in the middle
of the twentieth century, and leave him there.”

There is more poison in our own minds than the H-bomb, which brings me to the funeral of empathy:

The narrative centers around the crime of sensitivity in a desensitized environment. George Simmel, a German sociologist, speaks about this in his concept of ‘blasé attitude’. If a certain pattern of events fall into a monotonous loop in your life, then you adapt to it. In keeping with Darwin’s theory of evolution, it is perhaps necessary for one to protect themselves against constant victimization. A thick skin helps in survival. But there is a very fine line between the oppressor and the oppressed. In Munshi Premchand’s, ‘Kafan‘ (The Shroud), the pivotal characters of Ghisu and Madhav are oppressed peasants. But in trying to trick capitalism into benefiting them, they became stalwarts of the capitalist ideology. Returning to Simmel’s concept, we see that the monotony of destruction has made us immune to it. Suicide used to be a very sensitive issue even ten years ago. Now, with the suicidal tendency finding its way into more houses than tabloids can cover, the shock of it wears off faster.

In ‘Fahrenheit 451’, the nonchalance with which they raze libraries to the ground, or burn the owners if they refuse to leave, is quite reflective of the death of empathy around us. Look at state elections, look at Ku Klutz Klan marches, look at ballot rigging- there’s Bradbury all around you.

[…critics have argued that new technologies, such as the Internet, create “novel forms of alienation,” (Kellner 2006, p.48). This includes estrangement from other people, our bodies, nature, and “real life”.]

Most of us are familiar with the sci-fi TV series created by Charlie Brooker. Appearing for the first time in 2011, Black Mirror is a pivotal discourse on the ill-effects of technology. The title is an Easter egg that is equal parts clever and distressing. The opening sequence of every episode shows a screen cracking. Discussions have arrived at several conclusions for the moniker, but my favorite one is:

We stare at digital devices for the greater part of our day. If it switches off suddenly, then the black screen reflects our own face. This has been interpreted to show how technology brings out the worst in us.

Clarisse: “Bet I know something else you don’t. There’s dew on the grass in the morning. And if you look―”she nodded at the sky―”there’s a man in the moon.”

He hadn’t looked for a long time.

Montag’s wife, Mildred, has a parlor where three walls have been replaced with a digital surface. They are one wall short of losing her to pixels. The most poignant section of the narrative involves dialogues where Mildred refers to the characters on screen as her ‘family’. This brings me to Black Mirror S02e01 ‘Be Right Back’, where Martha loses her husband in a car crash (which is caused due to his obsession with social media even while driving). She uses advanced AI which feeds off his digital footprints, and replicates his personality in an interactive software, and then in person. Technology brings her family back together.

The book uses certain devices referred to as ‘musical insects’, or ‘shell’s. Appearance-wise, I assume they resemble Apple’s AirPods or wireless headphones, though Bradbury’s earphones seem to achieve feats which might take a few more years to become reality. Montag loses his wife to the world of digital entertainment, and is led to comment:

“And he remembered thinking then that if she died, he was certain he wouldn’t cry. For it would be the dying of an unknown, a street face, a newspaper image, and it was suddenly so very wrong that he had begun to cry, not at death but at the thought of not crying at death, a silly empty man near a silly empty woman…”

It is quite funny to note how technology was meant to make our lives easier, but it has almost managed to ruin our will to survive. It is either that outcome, or one where our subconscious (the Freudian ‘id’) is perverted to a level where we no longer recognize ourselves.

Originally derived from Leslie Paul’s autobiography, ‘Angry Young Man‘ (1951), the phrase was used extensively for ‘kitchen-sink drama’s. The writers associated with this trope usually centered their discourse around class distinctions and antagonism toward the Establishment- a sentiment which is more relevant than ever in our current setting. The anger being referred to is not one that arises out of being jilted in love, or having one’s finger cut on the chopping board. This trope focuses specifically on the surging dissatisfaction within the people who recognize the fallacy of the Law.

Jimmy Porter: “Oh heavens, how I long for a little ordinary human enthusiasm. Just enthusiasm—that’s all. I want to hear a warm, thrilling voice cry out Hallelujah! Hallelujah! I’m alive! I’ve an idea. Why don’t we have a little game? Let’s pretend that we’re human beings, and that we’re actually alive.”

Returning to Bradbury’s dystopia set in an indefinite time-frame, maybe he meant it to be a perpetual state of frenzy defining our existence, forever.

The Dystopia In Our Everyday

George Orwell’s, ‘Nineteen Eighty-Four‘, published in 1949, centered its discourse upon the utter lack of privacy that was gradually encroaching upon future generations. In the light of Facebook’s Cambridge Analytica scandal, or the FBI’s unethical surveillance on the private affairs of civilians, the novel’s idea sounds like a prophetic vision.

Ray Bradbury’s novel too, shakes us out of our skin and shows us that the post-modernists were right about us heading towards the apocalypse. We fight and berate during the day, donning a thick skin in the name of ‘personal survival’, then at night, we curl up in the bosom of Tumblr aesthetics which promise us that there’s more to this world than we have seen. Perhaps, it is true. Perhaps, there is more to this world than we have discovered. And I hope it remains that way. I hope no Columbus finds the last Tesseract on Earth. At least then, we will have a part of this Universe that hasn’t been touched with chaos.

Article Name
Fahrenheit 451: Living In 21st Century Dystopia
Author
Meghalee Mitra
Description
In Fahrenheit 451, Ray Bradbury brings us a thrilling story, but what makes the novel immortal is the sense of hope.