This Guy Couldn’t Have Picked A Better Time To Spring His Marriage Proposal To His Girlfriend!

When you hear about a marriage proposal, you start to imagine an elaborate set up, where the girlfriend is led to believe something that isn’t true, where a bunch of family and friends are involved in various stages of planning the ‘perfect’ proposal which has all the potential to go viral, and then the actual proposal itself. But I long for the days when a marriage proposal was a private affair between the couple involved, and the intimate moment that they shared. However, I’ve come to the conclusion that thanks to the digital world we live in, that’s highly improbable, unless you don’t film the proposal at all.

Anyway, despite viral marriage proposals having their own charm, the simplest ones are almost always that make you go awwww with their adorable-ness. And one such cute and absolutely sweet marriage proposal happened at the University of Mississippi Medical Center. 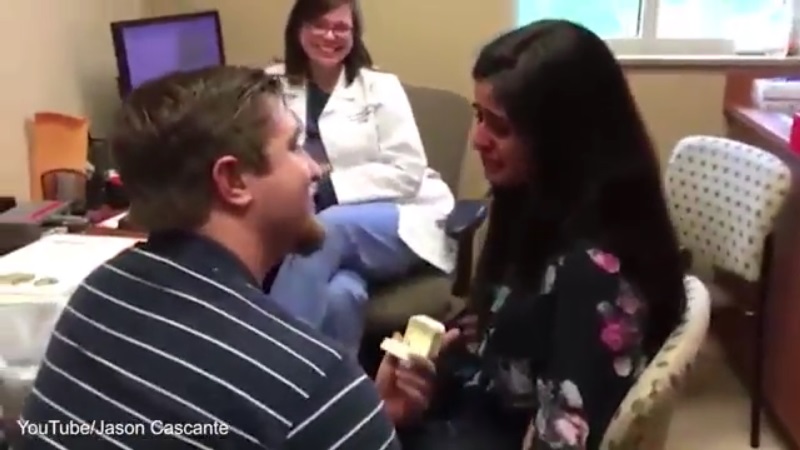 A deaf woman went to the medical center to have her cochlear implant turned on for the first time, with her mother and boyfriend accompanying her. As soon as the technician turns on her implant, she starts crying. First she hears herself speak and you can see the joy on her face when that happens.

Next she hears her mother saying I love you, and you can’t help but be touched. Then when the boyfriend starts speaking is when the magic happens.

Suggested read: This marriage proposal generator will help you plan the perfect proposal

He says, “I wanted to make one of the first things you hear,” and pulls out a ring box out of his pocket.

When she realizes what is about to happen, she starts crying again – understandably.

“I love you so much,” he continues. “You’re my best friend, baby… will you marry me?”

She gives out an enthusiastic yes! And then she yells, “I got a ring!”

He again says, “I love you, baby,” to the surprised woman.

Before kissing again, she says, “Your voice!” to her boyfriend. “So much is going on!”

How adorable is that! The guy couldn’t have picked a better time to propose to his deaf girlfriend, right?

Check out the video where one of the cutest marriage proposals unfolds:

What did you think about this marriage proposal? Did you think it was adorable? Share your thoughts with us in the comments below.

Article Name
Guy Proposes To Deaf Girlfriend At The Perfect Time!
Author
Chaitra Ramalingegowda
Description
This guy couldn't have picked a better moment to propose to his deaf girlfriend.