Making the cover of a magazine is a thing of pride by actresses and actors alike – and is given almost the same importance as their movies. These magazine covers have gotten more and more daring in their content and appearance, forcing us to have a second look at these smoldering actresses. Go grab a copy of these magazines now, before the year is up!

FHM India October 2014 edition featured Bruna as the sizzling hot cover girl. Bruna bares it all for this photo shoot and looks sexy in an unbuttoned faded denim sleeveless top and funky panties. Bruna Abdullah is a Brazilian actress and model who has worked in two Bollywood movies ‘Grand Masti’ along with cameos and item songs in many blockbusters such as ‘I hate Luv Storys’. 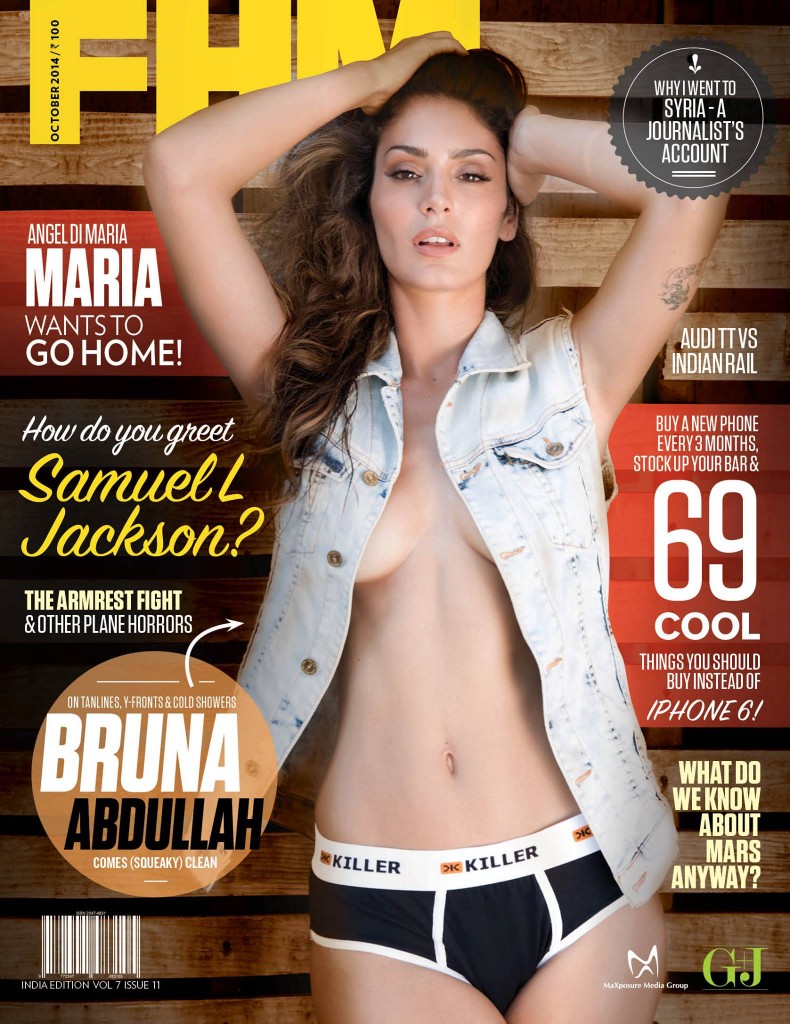 Femina Miss India 2007, Esha drew attention with her hot FHM magazine cover photo shoot for the November 2014 edition. She looks stunning in a black swimsuit with a lacy see-through shrug on top it. Her seductive pose took the hotness sweepstakes that month. Esha, who resembles Angelina Jolie, is well known for her past work in a few Bollywood movies from the Mahesh Bhatt studios, such ‘Jannat 2,’ ‘Raaz 3D,’ ‘Chakravyuh,’ and other movies such as ‘Humshakals’. 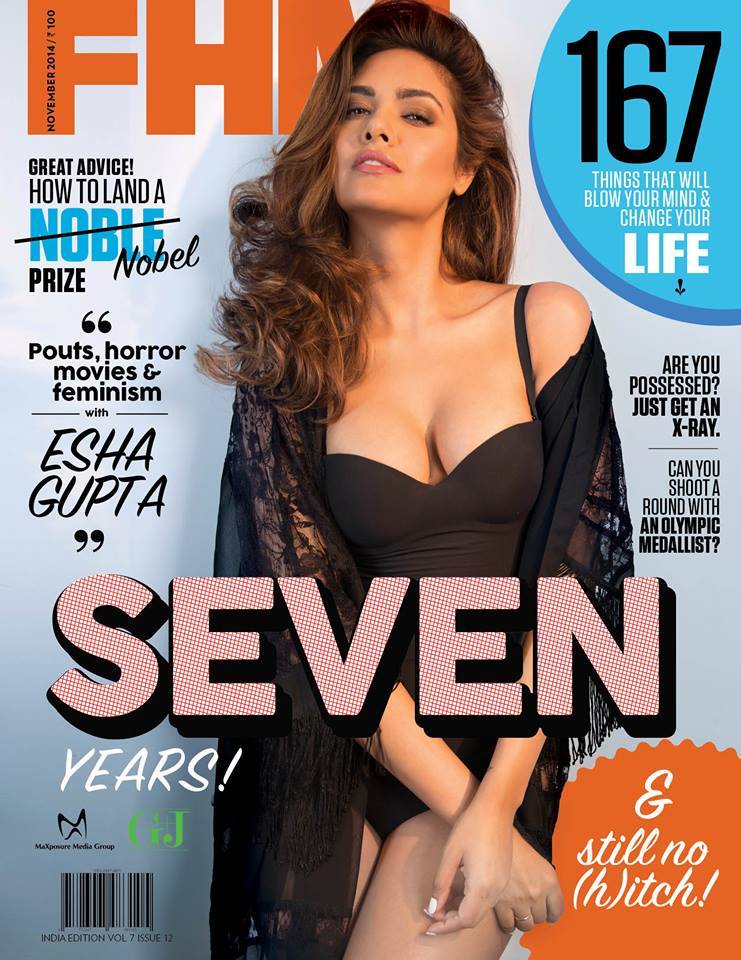 Nargis Fakhri appeared on the cover of the July edition of Filmfare in a maroon swimsuit. The shoot shows her in an indoor setting, contrasting with her swimwear with a slightly tousled look. She became well known to Indians by being part of the famed Kingfisher calendar a few years ago and then went on to make her acting debut with ‘Rockstar’ opposite Ranbir Kapoor. In 2014, she had a big release in Varun Dhawan’s Main Tera Hero which was a moderate success. 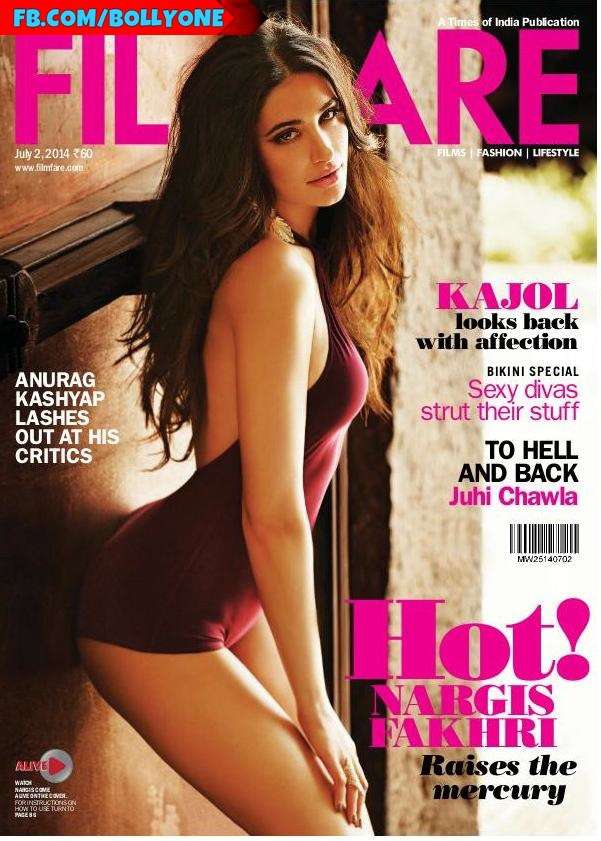 Anushka has featured on the cover of GQ magazine’s December 2014 edition. She wore an Atsuko Kudo latex bikini and a white feather jacket. While in her sexy avatar, she talks about men and the media hype surrounding her relationship status with Virat Kohli. She had a massive release in Aamir Khan’s PK to wrap up her year. 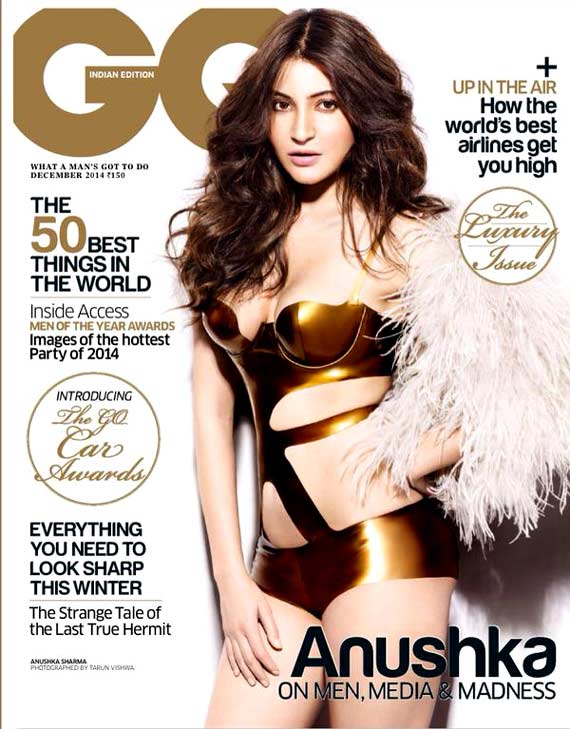 Lisa was featured as a cover girl in Vogue India November 2014 edition in which she dons the avatar of a seductress, wearing heavy traditional gold accessories as the issue talks about wedding jewelry and accessories. Lisa, she of the unending legs, is known for her acting in films like ‘Aisha’, ‘Queen’ and most recently ‘The Shaukeens’. 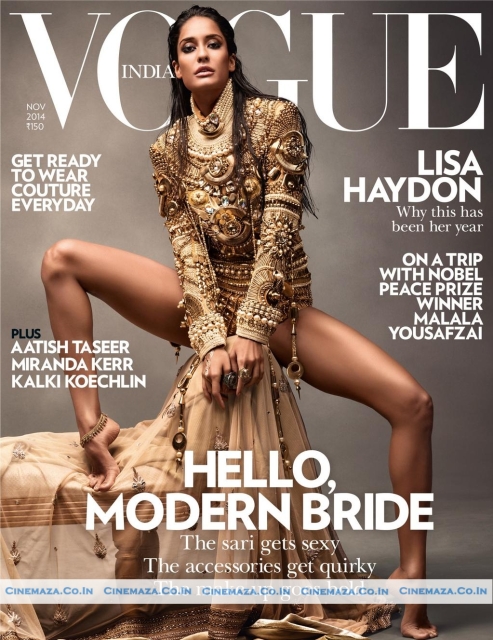 Shraddha was roped in as a cover girl for GQ India magazine July 2014 edition. She wears a Bordelle Spring Summer 2014 bodysuit and American Apparel shorts and black heels for this shoot and manages to look sizzling hot and sexier than ever. Her ‘Ek Villain’ ruled the Bollywood music charts this year along with winning her critical acclaim for her role. 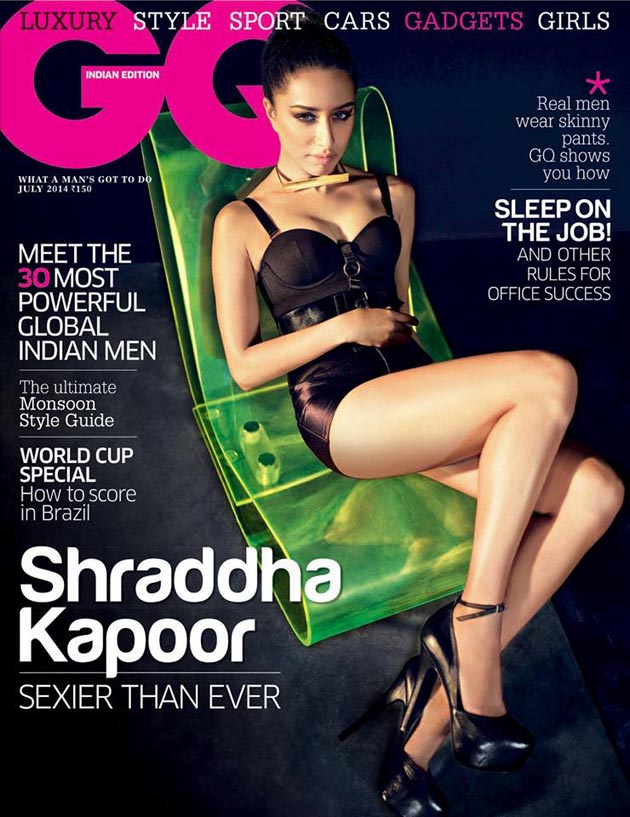 Evelyn poses sensually in the water in a black bikini with what looks like sequin for GQ India June 2014 edition. She is a German-Indian actress and model. She is known for her work in Bollywood movies like ‘Yeh Jawani Hai Diwani,’ ‘Nautanki Saala,’ and ‘Main Tera Hero’. 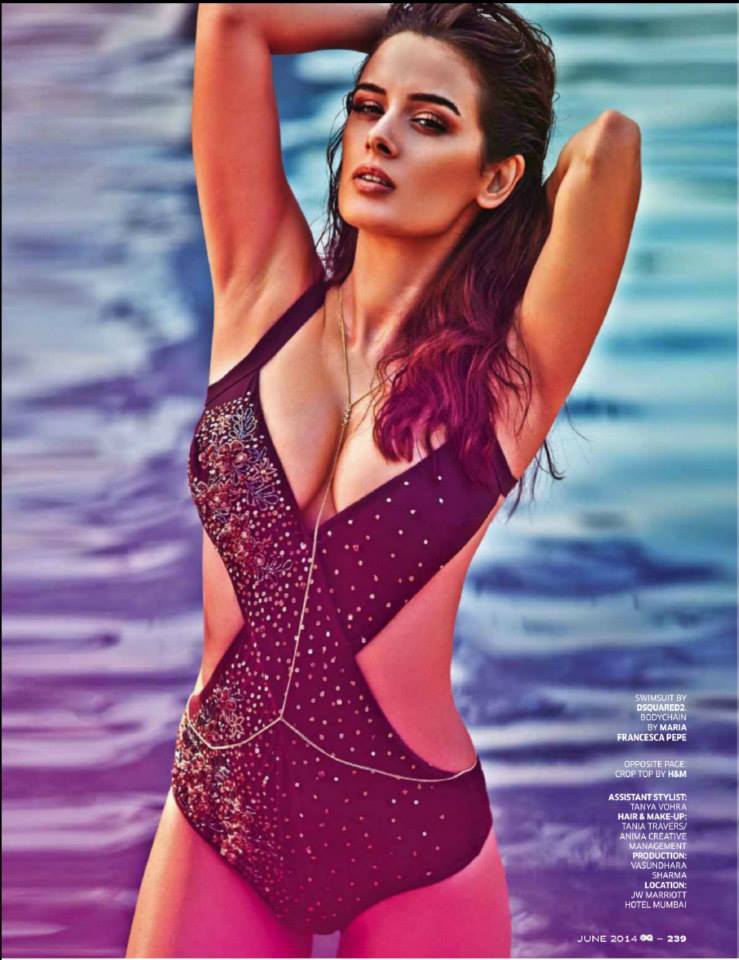 Kangana is known for her boldness and sex appeal in the film industry – be it her offbeat roles or her daring fashion choices. She has sizzled her way into millions of hearts with her shoot for GQ India Magazine October 2014 edition where she is see wearing an ivory corset with a goth-ish appearance. 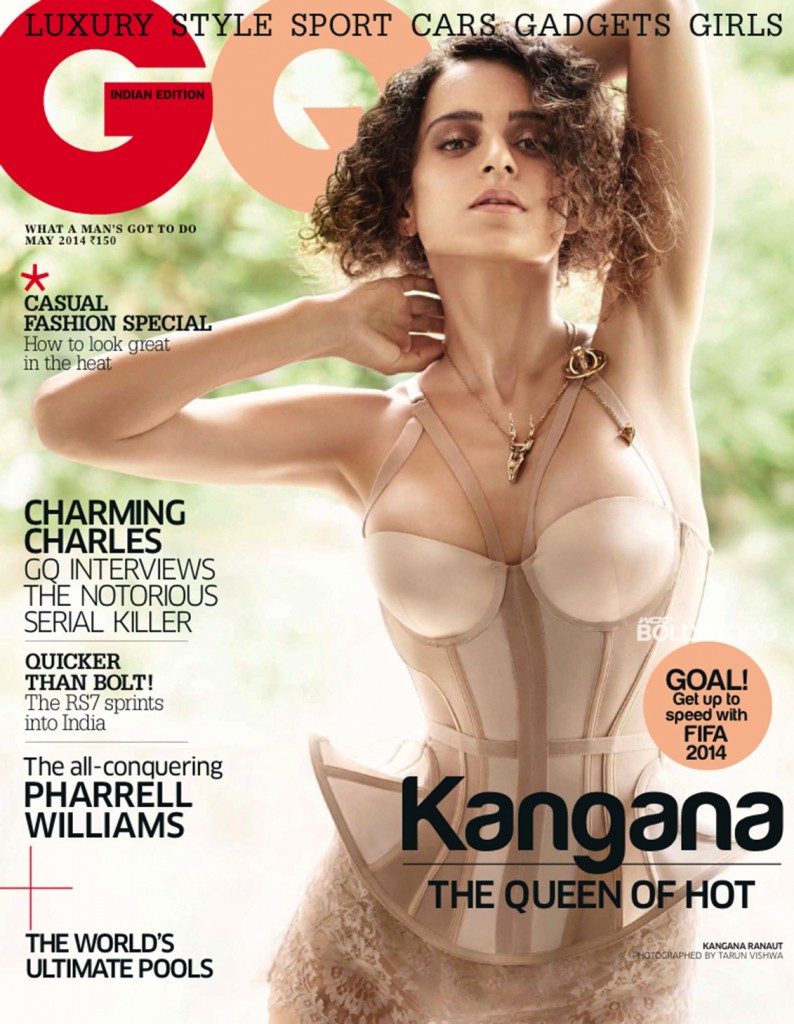 Nathalia is a Brazilian model and actress. She was a lead model in Kingfisher 2012 Calendar. She has also made her appearance in Hindi, Kannada, and Telugu movies. Nathalia dons spicy red-hot lingerie and heels to match for the Maxim July 2014 shoot. 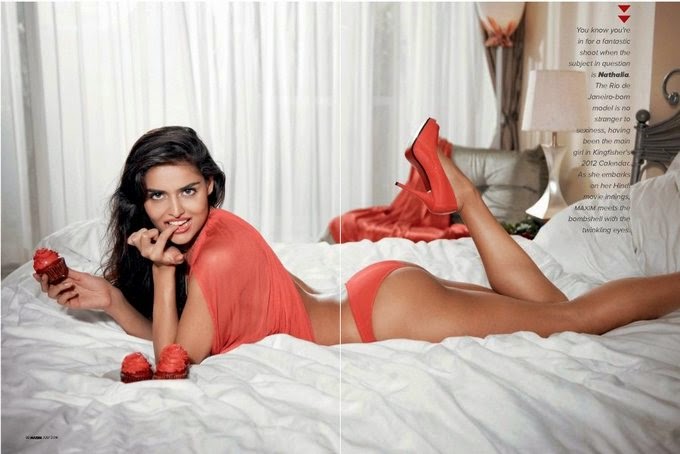 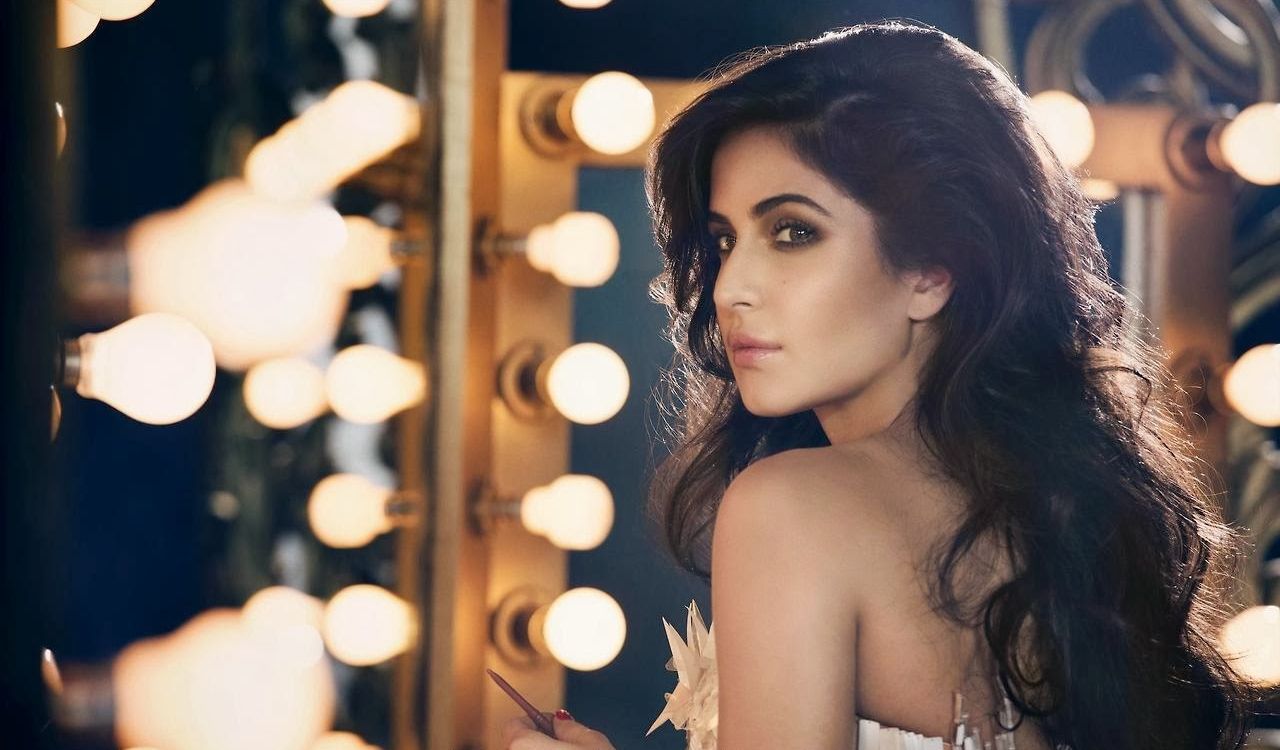