It’s A Date: How One Woman Came Up With A Different Offline Dating Service

Online dating is so ubiquitous, that even teenagers are apparently trying out Tinder and the like. But it’s not all sunshine and roses when it comes to meeting someone interesting, who fits the bill of your potential someone. It can be frustrating and darn near impossible to meet a nice enough person online. Agreed that there are genuine people on these dating apps/services looking to meet a like-minded individual in the hopes of getting into a relationship. But the fakes outnumber the genuine by a large margin, unfortunately.

So how do you go about meeting single people, who are looking for something serious, just like you? Not online, you don’t. But chances of that happening offline are good, if this new dating service is to be believed. 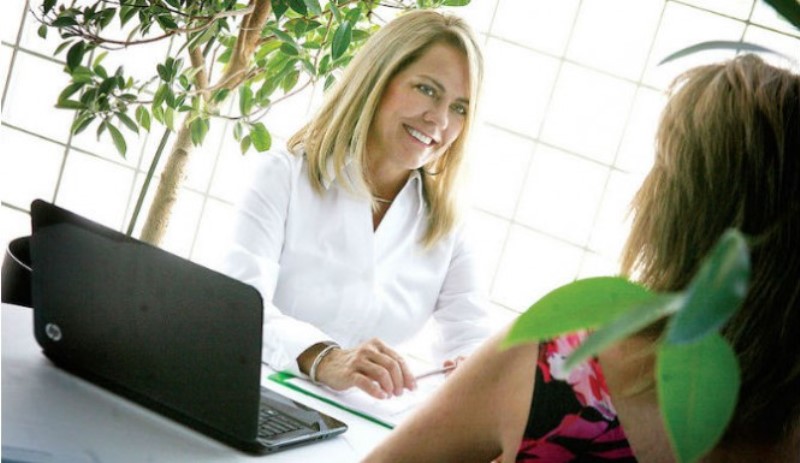 Kathi Pewters of It’s a Date consults with a member

A new dating service called It’s a Date, has been set up by Kathi Pewters, who is in her 50s. When dates set up by her well-meaning friends didn’t quite work out, the spry and active woman wanted an option that was neither the multitude of online dating sites nor the night clubs. Of the former option, Pewters says,

“It feels like you’re shopping for a used car. That’s not the experience I want and understand others don’t want. It lacks the emotional connection.”

Having had no luck meeting interesting new singles in her area, Pewters even considered putting up her house on sale and moving to the Front Range in the hopes of meeting single people, even though she enjoys living in the Grand Valley.

Suggested read: AirDates, an in-flight dating app, is all set to take off

Instead, Pewters decided to start It’s a Date, a professional dating service that provides safe, enjoyable, and convenient ways to meet single people. Calling her dating service elegant and sophisticated, she admits that she’s drawn on her own experiences to come up with it. She says,

“What would feel comfortable to me? What would I want out of a service such as this?”

So how exactly does It’s a Date work?

Members interested in availing her services, create profiles and make videotapes, which contain their introductions. Pewters helps make these tapes too. Later, she identifies potential matches based on the information the members have given her during consultations, in their profiles, and also through ongoing conversations. Further, she also sets up dates between two potential members, following it up with a conversation with each of them to tweak the matchmaking process as needed.

Pewters offers varying levels of service, including six- and 12-month subscriptions, along with helping members with their personal profiles. Depending on the service a member opts for, Pewters guarantees a minimum of six or 12 dates.

Pewters says she takes on the onus of setting up the dates so as to take the pressure off the members so that they can focus on spending time getting to know each other. And these dates too are not completely random – they are based on members’ preferences, which could mean the dates vary between a coffee date or a dinner date or even some sort of activity.

At the conclusion of a date, members are free to exchange their contact details and even make plans to meet again. On the other hand, they are even free to proceed in the process and meet other potentials too.

Admittedly, one of the most important parts of Pewters’ service is the ongoing conversation that she has with members after their dates to get an idea of what worked and what didn’t, so as to fine tune her matchmaking process.

She says, the basis of compatibility varies considerably. “I think it depends on the person.”

Suggested read: Tab dating is a new dating app built into your browser

While some people look for similar-minded individuals, others prefer someone with an opposing personality. She also avers that most of her clientele are looking for long term relationships, and not hookups. She believes she can help them find ‘their potential someone,’ and arrange their last first date.

“There’s somebody out there for everyone,” she says.

Not only does It’s a Date plan and send its members on one-on-one-dates, it also hosts meet-and-greet events that are open to all members. These events are an opportunity for the members to meet others like-minded individuals freely and even exchange information, if they so choose. According to Pewters, the important distinction of these events is that everyone is single and interested in meeting others, with a long term relationship in mind.

Pewters has big plans for the company, with expansion in terms of geography and staffing are in the offing. “This company’s going to grow into something big,” says Pewters.

But for the present though, she wants to focus on expanding the membership base of It’s a Date, and help these very members meet others like themselves.

“This is about making it nice for singles to live here,” says Pewters.

Article Name
It's A Date: One Woman's Answer To Online Dating Services
Author
Chaitra Ramalingegowda
Description
Kathi Pewters was so frustrated with the current crop of dating services, that she came up with It's A Date, an offline dating service. Check it out.