It’s High Time We End The Misogyny In Music, And Here’s Why

There’s more to this than meets the eye. 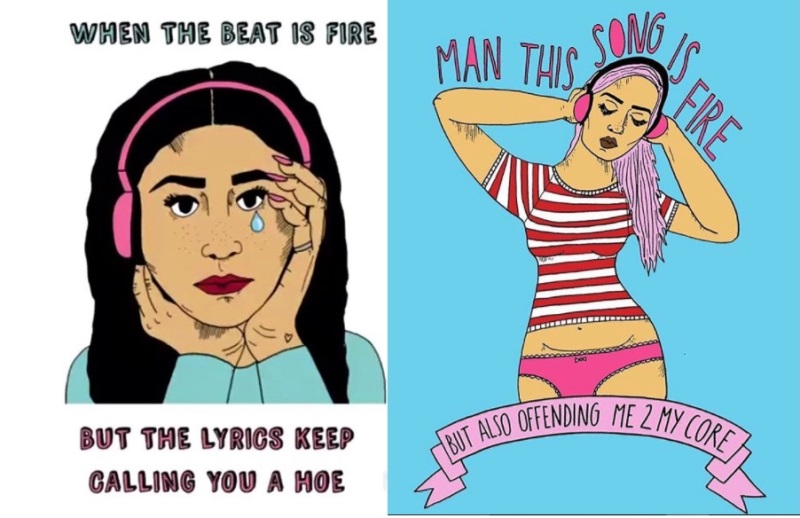 When Despacito went viral, I realized that you don’t have to understand a song to love it. In fact, when a friend translated the song into English, I couldn’t believe what I had been humming along to. YouTube hosts videos of so many kids singing Despacito in distorted Spanish. I wonder if their parents would still film them and laugh if they knew what the song meant. “I want to undress you in kisses slowly” doesn’t sound like something you would want to hear from a 10-year-old.

Suggested read: 14 Instances Of Everyday Sexism All Women Face On A Daily Basis

Don’t get me wrong. I love the song. In fact, I can actually sing quite a bit of it in Spanish. I’ve labored for days trying to memorize a language I do not know. I’m not playing it safe here.

Sometimes, when we listen to music, our senses brush over the words. That is how we have been allowing misogyny in music to perpetuate across all cultures. There is something inherently problematic about viewing women as ‘receivers’ only. Take Despacito, for example. “Come try my mouth and see if you like its taste”. How about no? How about I try whatever I want to, when I want to. “I know that you’re thinking about it/ I’ve been trying to do it for a while”. How can you be so sure? Are you psychic? Do you live inside my head? Is wearing ‘red’ a symbol for ‘I want it’? No? I have a mouth. If I want it, I shall let you know.

3.8 BILLION views, and people still haven’t called this out.

What I’m about to discuss does not absolve me of anything. If you are guilty, then so am I. But if we don’t take a stand for the human race, who will?

The Beginning: Why Did Music Endorse Misogyny?

John Lennon said: “I think music reflects the state that the society is in.” It’s true. The most evergreen of songs are ones that you can still relate to. ‘When You Say Nothing At All’ by Ronan Keating was released in 1999. I have heard lovers crooning it in abandoned hallways. I’ve witnessed spurned mistresses break a smile, grudgingly. The song never got old because it never went out of context. Human emotions are quite possibly the only constant in this world. Songs that become popular, are ones that hit a nerve in all of humanity.

So, why is it that women were objectified in the realm of music? It’s because this is a latent motif in reality. I have noticed that Hip Hop is particularly disrespectful to women, more than any other genre. I am not disrespecting any artist, but only the sentiment attached. In researching for this discussion, I stumbled upon several snippets that have changed how Lil Wayne appears to me now. I really admire his talent, but probably cannot say the same for the human being anymore.

Kanye West said, “Generally rap is misogynistic”. He did not use it as a justification, but merely stated the obvious. In an interview to The Guardian, he described misogynistic lyrics as an outlet for men who’ve found themselves belittled, turning towards the women in their lives and lashing out at them in order to feel validated. Women have been the punching bags for several generations. Domestic abuse successfully trickled into music, over time.

This takes me back to an overdone argument, but I will talk about it nonetheless. If a man sleeps with a lot of women, he carries it like a badge of pride. When a woman does the same thing, she becomes a slut. She becomes a woman of no moral values, easily available, ineligible for marriage, and so on. It’s almost like men do you a favor when they accept you without your virginity. It is no secret that men derive power from their performance in bed. As annoying as this analogy sounds, it is the truth for most. So, portraying women as inferior sexual beings at the mercy of the male, becomes a status symbol for them. This has been the truth for several generations, and much like global warming, it is only getting worse.

Suggested read: Why Containing Misogyny Is Not The Same As Being A Misogynist: An Inspection Of George R.R. Martin’s A Song Of Ice And Fire

Why Does Nobody Outrage Against This Apparent Misogyny?

They do. I am. Will this make a difference? Hardly.

If you happen to google ‘misogyny in music’, the results will be far from a blank page, I assure you. Somewhere, I know that the reason why you’re even reading this, is because you know it’s true. Everybody does. Yet we accept it.

I’ve listened to ‘Swalla’ more than a hundred times. It is only now that the lyrics have begun to hit me. “Bad girls gon’ swalla (swallow)”. Okay, wow. 10 points for categorization skills, Derulo. “All you girls in here, if you’re feeling thirsty/ Come on take a sip ’cause you know what I’m servin'”. Okay, where do I begin? If I’m feeling thirsty, I have water. It isn’t extinct. Yet. Also, Dear Women, if a guy puts his p*n!s on display, like it’s the peanut-shaped pill for Moksh, like it’s everything you have ever wanted, how do you still find him attractive? There is a part of my brain that is perpetually given to figuring out how masculinity can be fragile enough to clutch their sexual organ as their biggest asset. But we sing along.

So, one reason why most people don’t outrage is ignorance. We listen to a song, without quite analyzing it. It is 2 hours after we have danced our heart out that we start registering the lyrics.

Secondly, and most importantly, we don’t object because we identify with it. Let’s talk about men first. Through the ages, testosterone-driven teenagers have been taught that having a “game” is important. They have watched their fathers treat their mother either like a prized exhibit, or like garbage. Either way, they have been dehumanized; reduced to mere concepts; stereotypically treated in ways that comfort their masculinity.

Let’s’s take Game of Thrones, for example. Did you notice how they treat the ‘whores’? Tyrion Lannister, a character whose brain I am in awe of, used his prowess in bed as a substitute for his handicap. Sex for validation. Even with dragons, and White Walkers, this show hits reality in the eye.

Misogyny is here, and it is very very real.

However, is it just the men? Absolutely not.

Women Against Themselves: Supporting Misogyny

This is perhaps what has stunned me the most. These are stars with millions of views and Grammy-winning artists I’m about to discuss. They have allowed misogyny to course through their songs without realizing that it pulls them down too.

After years of fighting the patriarchy, women have internalized it. We call ourselves and our friends ‘b*tch’, ‘sl*t’, ‘h@es’. Albeit said affectionately or from a sense of power, we are only perpetuating tags that belittle us. In Swalla, Nicki Minaj sings, “I’m that b*tch, and he know”. Are you, Nicki?

In Bon Apetit, Katy Perry sings, “So you want some more/ Well I’m open 24/ Wanna keep you satisfied/ Customer’s always right”. Ahem. What? I understand affection, and love, but this is some other-level service. Please don’t tell men we’re open 24. It’s called marital rape. Also, no I don’t want to keep men satisfied. For one, it’s impossible, and besides, I have a life to live, remember? This reminds me, Robin Thicke‘s controversial ‘Blurred Lines’ said: “What do they make dreams for/ When you got them jeans on”. I mean, wow. Really? For the love of God, let us breathe.

Sometimes, in trying to bring down another woman, female artists endorse misogyny. In Taylor Swift’s ‘Better Than Revenge‘, she is outraged about a lady “stealing” her boyfriend (What are we? Kindergarten kids? Oh Lord). She sings: “She’s an actress/ But she’s better known for the things she does on the mattress.” For real? This is why I think Lilly Singh’s #GirlLove campaign is so relevant. The world is already out to get us. We might as well stick together.

In ‘Marvin Gaye’ by Charlie Puth, Meghan Trainer sings: “And when you leave me all alone/ I’m like a stray without a home/ I’m like a dog without a bone”. Oh come on, Meghan. When you miss your man, you become upset. You do not transform into a dog. Please don’t let society affect you enough to make you feel insufficient. Especially if you’re a public figure with the power to influence a large group. Tell them things like ‘vote responsibly’, or ‘finish high school’, or even that ‘unicorns are real’. But don’t tell them they cannot live without a man.

The biggest offense you could cause this world, is viewing a woman through the eyes of patriarchy.

What Can You Do To End Misogyny In Music?

Don’t support discrimination simply because you love the artist. I am a fan of several people I have criticized here. Don’t let love blind you from the obvious wrong.

It’s the 21st century and we’re still measuring worth by gender. Crazy, isn’t it? Deciding how much money you can have based on what’s under your clothes? Deciding whether you deserve humane treatment based on the chromosomes that made you? I mean, you could labor to heal this world, but if you’re running for President, people will still judge you by your genitals. So, so completely crazy.

This world has been on the highway to hell for quite some time now.

Get off the bandwagon.

Article Name
It's High Time We End The Misogyny In Music, And Here’s Why
Author
Meghalee Mitra
Description
Discussing the misogyny in music doesn't absolve me of anything. If you're guilty, then so am I. But if we don't take a stand for the human race, who will?