The bride and groom in this wedding were not more than 2 feet high and forgot to wax for the big day!

In India, sometimes, children are made to feel as if they have been raised by their parents for the sole purpose of getting them married off. After they get their offspring married off to a ‘good’ person with a ‘good’ family background, a ‘good’ job with financial stability, they then hound them about the next logical step – grandchildren. It’s a never-ending cycle that keeps them occupied.

And this phenomenon isn’t just confined to human beings either. Apparently, it applies to unusual pets as well. In this case, monkeys. 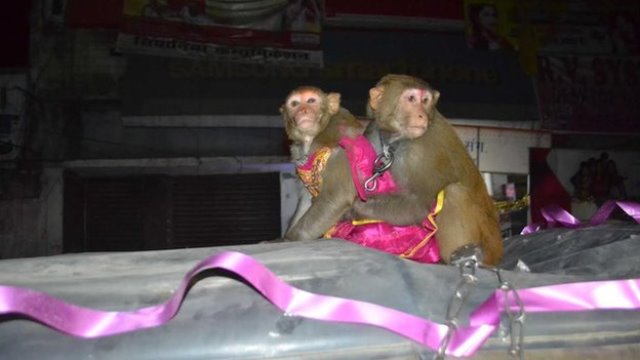 Ramu and Ramdulari on a bedecked suv during their wedding procession

In Bihar, more than 200 villagers were witness to an elaborate Hindu wedding ceremony for two monkeys. Udesh Mahto, a daily wage worker, bought a male monkey named Ramu from Nepal about seven years ago, and a female monkey named Ramdulari from a village fair. Since then, he has considered Ramu as his “eldest son,” so he wanted to get “him” married off.

The ceremony took place on Monday evening in Bettiah district in Bihar, an auspicious day and time chosen specifically for the wedding. It was even ‘solemnised’ by a local Hindu priest, Sunil Shastri. He said, “Initially I was wary of performing a monkey wedding, but I later relented after seeing that Mr Mahto was serious about it. We picked an auspicious day and time for the ceremony.”

All the trappings of an actual wedding were taken care of. The ‘bride’ was dressed in an orange frock, while the ‘groom’ wore a yellow t-shirt. Wedding cards were printed, a band was hired to play at the wedding, and the guests were treated with a feast as well! The 13-year-old ‘groom’ and his ‘bride’ were then taken on a procession on top of a flower-bedecked SUV, while onlookers and guests danced and cheered the ‘newlyweds.’

Udesh said, “I wanted to marry him off first,” who has three actual human children with his wife, apart from Ramu.

“Initially they didn’t get along well. But later they began liking each other, so I decided to marry them off,” said Udesh of Ramu and Ramdulari’s ‘love story.’

Monkeys are considered sacred by Hindus, since they are thought to be the descendants of the monkey God Hanuman. They are often found near temples, and most devotees feed them bananas or coconuts kernel.

That is all well and good, but to hold an elaborate wedding ceremony for monkeys? That is taking things to a whole other level.