Regressive, Sexist Ads Banned In The UK; When Will The Indian Media Learn?

Women cleaning houses, harrowed men running after unruly children, faceless women with exposed bodies lying splayed across billboards – these are some of the images we have become so used to seeing on television and advertising that it is almost unsurprising now, even though the level of discomfort we feel as educated people, remains undeterred. One of the most prevalent ways in which sexism has been ingrained into the mind of the common people is through sexist ads, which are, and have been unfortunately, a worldwide phenomenon since Technicolor came into existence.

Suggested read: A Typical Example Of The Condition Of Sports In India: Para-Athletic Champion Forced To Fend for Herself In Berlin Streets

After several decades of advocating for the rights of women and emphasizing the evils of sexism, some kind of authority has finally decided to sit up and take notice, and from next year, sexist advertisements are set to become obsolete in all of Britain. Although this ban on sexist ads is cause for a sigh of relief among people not only in Britain, but all over the world, it has also sparked off a discussion about sexism in advertisement and mass media, in general, and whether Britain will be successful in implementing such a progressive decision on such a large scale.

The Geena Davis Institute on Gender in Media at Mount Saint Mary’s University conducted a study, recently, about the gender roles in advertisement, and they found that men got almost 7 times more speaking roles than women did in advertisements and commercials. The roles that men and women play in such commercials too, have not failed to subscribe to the pre-existing gender stereotypes in advertising.

While women are almost always seen as homemakers, housekeepers, and oftentimes as sexual objects where their bodies are emphasized over and above their faces, men are often the center of attention in commercials which are about sports, cars, finances, etc.,According to the Advertising Standards Agency (ASA),

A tougher line is needed on ads that feature stereotypical gender roles or characteristics which can potentially cause harm, including ads which mock people for not conforming to gender stereotypes… (Their) review shows that specific forms of gender stereotypes in ads can contribute to harm for adults and children.

Implications of the ban

One might wonder about the kind of effects such a ban would have on representation in general, if it were to become a blanket ban. For example, the ASA plans to disallow ads which feature women cleaning and men shying away from household work. This might become a problem and enforce reverse sexism where none of the advertisements in the future show women engaging in household work. To solve this crisis, the ASA has decided to not impose a blanket ban, and instead, encourage those advertisements which promote a collaborative effort on the part of both men and women, who engage mutually and equally in activities which were previously gendered, based on pre-existing sexist stereotypes.

Even though this seems to be a highly commendable and progressive step for the media in Britain, the rest of the Western world doesn’t seem to be far behind. Preceding this almost historic announcement by the ASA, some of the world’s leading companies came together at the Cannes Lions Festival of Creativity,and vowed to proactively eliminate sexism and gendered stereotyping in advertising. The companies included the likes of Johnson & Johnson, Facebook, Twitter, Microsoft, AT&T, Google, and Procter & Gamble.

The ban in Britain is set to extend not only to the portrayal of women in set social and domestic roles,but also in terms of targeting the aspiration of women of all ages. Advertisement and commercials are, oftentimes, responsible for advocating a certain kind of beauty standard, which is unreal and unhealthy, and leads to eating disorders in impressionable women. Sexist advertisement also tends to show young girls and boys aspiring to be very specific things like ballerinas and engineers respectively. Also a decade-long study by the ASA has also shown how leaders and people in important positions in commercials are almost always men.

Suggested read: Meet Alison Teal, The Female Indiana Jones With A Cause

To eradicate this kind of conditioning in the behavioral patterns of men and women of all ages who are exposed to commercials of various kinds, the ASA has decided it is finally time to act like it is the 21st century, and remove all kinds of sexism from their print and digital media.

Portrayals which reinforce outdated and stereotypical views on gender roles in society can play their part in driving unfair outcomes for people. While advertising is only one of many factors that contribute to unequal gender outcomes, tougher advertising standards can play an important role in tackling inequalities and improving outcomes for individuals, the economy and society as a whole.

David Ogilvy, the Father of Advertising, had once said that though advertising reflects the customs and behaviors of a society, it, however, does not influence them. Let’s just agree to disagree here, shall we? Today, we are surrounded by media; our thoughts and the way we behave, are molded by what we see. Let’s take, for example, a child who is constantly exposed to sexist ads, that strengthen the idea of mental health as an absolute no-no for a particular gender, and/or, reinforce the idea that only the skin that is fair, is beautiful. How do you suggest that this child does not get influenced by what he watches? How do you ascertain that what he hears on television, does not become a part of his inner voice; a part of his outlook?

The color pop and rhyming jingles guarantee the attention of children, and contribute to the way they look at life. The advertisement industry cannot run away from shouldering responsibility for the stereotypes that children learn from ads.  If you don’t believe us, watch the following video that makes you critically examine a very important question: When did the idea of “running like a girl” get a meaning that is not “to just run”?

I am from India, and let me talk about some of the ads that we are subjected to that are absolutely cringe-worthy and should be banned – stat!

I really want to meet the people who create these deodorant ads. I am sure they do not share the same planet that I live in because I certainly haven’t met a single woman who is an osphresiolagnia-c. No, I didn’t make that up. Osphresiolagnia is a psychological condition identified by Sigmund Freud. It suggests that there are some people who are instantly sexually aroused by fragrances.

Whoever started it, okay, I forgive you, because maybe you just wanted to create something funny (it is NOT funny, but any standards). However, after that first ad, everyone shamelessly churned and is churning out the same piece of crap to sell deodorants even today!

A couple of days back, I was at the food mart buying my supplies. When I reached the billing queue, the person in front of me had a deodorant can in his hand (no, I won’t reveal the brand, but here’s a clue, “they make a man feel very, very, add a few more verys, sexy”). So, he holds this product up and asks the lady at the counter, “Madam, is this the best deo available? I mean, will this make girls fall for me? I mean, can you suggest a fragrance that will make me desirable to young women?” I am obviously rolling my eyes, and during a rotation I see the look on his wife and daughter’s faces, and I am shocked that they are beaming with pride on how witty their favorite person is!

This is what some ads do; they make you and your family a laughing stock!

The same judgment is used to sell dishwashing soaps. You will see that women even hold a public meet (with only women in the audience and on the dice) to determine whose dishwashing soap is the best. Yes, stay with me.It is their Hunger Games, something they’ve been preparing for all their lives while the men were just sharpening their wands to whoosh off to Hogwarts!

3. The woman who does it all

Argggg, these are the worst kind of ads! I don’t know if you guys remember, but a couple of years back there was this ad about how a woman boss who isn’t happy with one of her subordinate’s assignments, and makes him work overtime. Cut to the next shot, we see this lady go home and cook her husband’s favorite meal. Cut to the final shot, the subordinate is the husband! Now if you cannot identify the stereotyping here, then know that I am banging my head on the wall right now! Okay, now I am ready to explain. The ad wants you to believe that women might become bosses, but at home, they will still be the cook who is supposed to please her husband. THE END.

Ah, the ads about how beauty is a color. And you know what, these ads actually changed with time. As in, earlier it was just women who were supposed to be obsessed with the shade of their skin color, but now it’s also the men. Let’s celebrate!

When people like Shahrukh Khan become the face of “Fair and Handsome” (as if the two adjectives are conjoined twins who cannot go separate ways), we know that there is something extremely wrong going on. This depresses me.

The fact that Britain is taking such a bold move is laudable, but unless this happens in India, the country whose ads I have to digest, I won’t be happy. 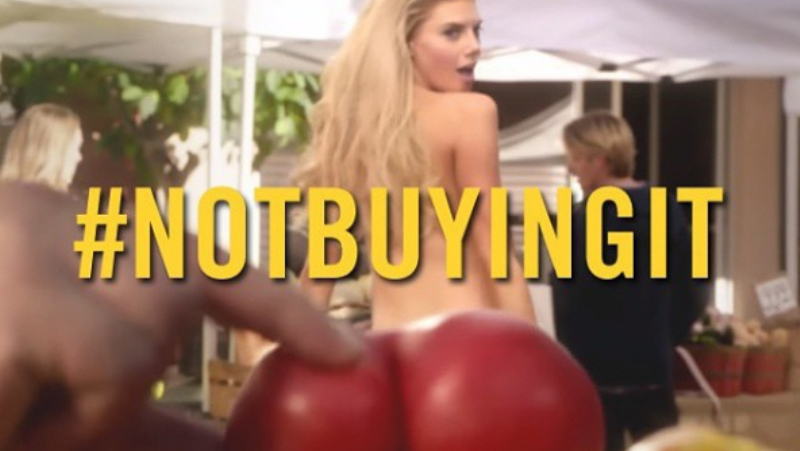 Article Name
Regressive, Sexist Ads Banned In The UK; When Will The Indian Media Learn?
Author
Team NLT
Description
Residents of Britain are celebrating the long overdue ban on sexist ads in their country. Is India likely to draw inspiration anytime soon?