Whenever there is a global discourse on feminism, India is almost always glaringly left out of the picture. Women from all over the world are celebrated because of their role in the Feminist Movement, and even though there wasn’t a full-fledged Feminist Movement in this country, several individual progressive women created history, which is seldom spoken about.

We shall not be making that mistake today, for we are going to talk about one such pioneering woman- Savitribai Jyotirao Phule, a woman who is not only remembered because of her contribution to the education of women in India, but is also referred to as the first feminist of the country.

Savitribai Jyotirao Phule was born on 3rd January, 1831, when India was very much subjugated by the East India Company, and Independence was still a century away. It is important to understand the context of the age during which she was born.

19th century India was an orthodox, traditional and religious society where education was a privilege reserved only for boys. Not only were women not allowed to go to school, but also not allowed to participate in public life in any way. Widows weren’t allowed to remarry and lived their lives from the fringes of the society. Practices like Sati and child marriage was prevalent.

In fact, Savitribai was married off to her husband at the juvenile age of 9, and her husband, Jyotirao was only 13 at the time. However, this union proved to be a historical one. She started to learn how to read and write from her young husband, and by the time they were 17 and 21 respectively, they had established the first ever school for women in Bhidewada, Pune.

The Social Reforms of Savitribai Phule

Savitribai Phule is celebrated as the first radical, progressive feminist of India. However, she is remembered for her contribution to the field of women’s education, when in fact, she did so much more to bring about positive change in the prevalent social system of the time. In a society where women were not allowed a voice and were not allowed to leave their homes and were subjected to social stigma from widowhood or child marriage or rape from a young age, it took an incredible amount of bravery to launch a movement against such a system, as a woman, in 19th century India.

Here are some of her greatest achievements, things which should eternally remember her for.

1. Her contributions to women’s education in India is unparalleled

Even though we are going to be talking  about all her other great achievements, there is no denying that the fact that she established a school for women with her husband, as a 17 year old girl in an oppressive society, will forever remain her greatest achievements.

The school that she and her husband started in Bhidewada started out with a  mere 9 girl students, who came from nearby villages, and belonged to different classes of society, another phenomenon that was unheard during that time, because of the strict caste system that was in place. A lot of critics are of the opinion that she was the first female teacher of the country.

2. She was an advocate of intersectionality, before it was a thing

The caste system was a major problem during the 1800s, something Savitribai recognized and chose to address consciously. Not only were widowed women treated as outcasts, but also people belonging to lower class, such as Dalits, who were considered ‘untouchable’, a practice that even Gandhi strongly protested against, in the following century. In fact, she had a well in her house solely for those people, who weren’t allowed to drink from public places because of their “low” caste.

The school in Bhidewada was started for girls belonging to the marginalized Dalit-Muslim community, which was as progressive as it gets. In fact, if someone were to do something like that now, it would still be considered progressive. Savitribai advocated for the inclusion of all castes, creeds, sexes, and other sections of the society into mainstream culture and society, without discrimination.

She also recognized the plight of the Brahmin women, who had to shave their heads and live the life of vagabonds or prostitutes after the death of the husbands, in case they didn’t commit Sati in the first place.

3. She was engaged in organized protest

Not only was she advocating the rights of women unconsciously through her actions, but she consciously chose to be a part of several important small-scale movements that took place during that time, such as the petition to allow widow remarriage in 1853. She is also said to have started one of the first Human Rights center for women in the country in 1852, which was called Mahila Seva Mandal and was dedicated to spreading awareness to local women regarding their rights.

She organized a strike, where barber’s refused to shave the head of widows, in order to allow them equal rights to move in society. A lot of widows were being impregnated, and in order to protect their honor and to avoid being ostracized by society, they either committed suicide, or killed their newborns. In order to curb the growth of this horrifying practice, Savitribai and Jyotirao started a “Home for the Prevention of Infanticide” to protect such women, and give them shelter and asylum, in 1863.

4. She took on the patriarchy

It is important to remember that in 1800s India, women didn’t have a voice. The fight that Savitribai fought was something she did on her, without the support of other women behind her. At the risk of being shunned by society, rejected by the masses and even physically harmed, Savitribai and her husband took baby steps to make the society a more tolerant and modern place.

Taking the on the patriarchy, walking alongside her husband, instead of in his shadow and addressing issues like caste-ism, sexism, child marriage, widow torture, etc. are possibly the reason she is referred to as the first female feminist of the country.

5. She started her own religion

Brahmanical practices and the supremacy of the Brahmins was the natural order of the society during that time. However, because the Brahmins condoned it, evil practices were also rife in such a society. In an attempt to fight these practices and lend support to oppressed people in society such as women, widows and Dalits, Jyotirao Phule and Savitribai Phule started their own religion called Sarvajanik Satya Dharma or the Religion of Universal Truth for All. It was an inclusive religion that welcomed people without bias or discrimination and possibly became the first microcosm for a progressive and inclusive society.

In 1957, Yashwant, her adopted son, and Savitribai established a clinic to treat those affected by the Third Pandemic of the bubonic plague, which was taking lives worldwide. While treating a patient, she contracted the disease herself and passed away on 10th March, 1897.

History remembers Savitribai Jyotirao Phule as a pioneering feminist, a stalwart in her own right, fighting for the rights of women before anyone could imagine such a thing. We remember her as a brave-heart, a trailblazer who continues to render generations of women with strength and wisdom. 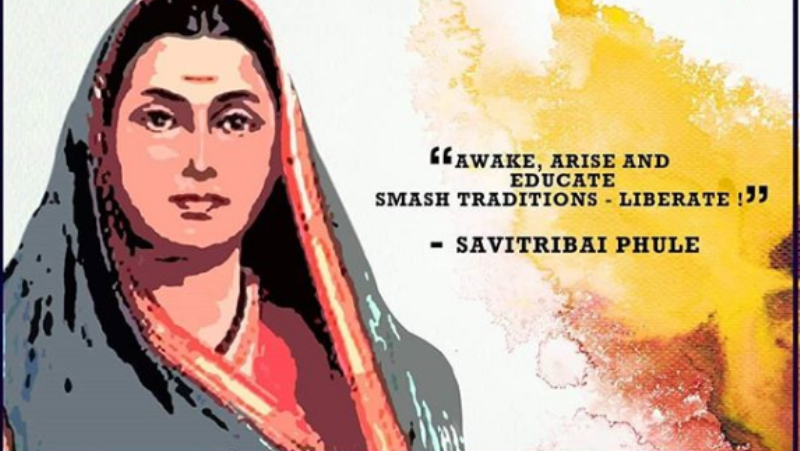