Demi Lovato is not one to shy away from uncomfortable topics. The singer has always been vocal about her struggles with bullying, substance abuse, and mental illness. Just last month at the DNC, Lovato urged politicians to support legislature that provides people with better access to healthcare.

“Like millions of Americans, I am living with mental illness, but I’m lucky I had the resources and support to get treatment at a top facility,” the singer acknowledged. “Unfortunately, too many Americans from all walks of life don’t get help, either because they fear stigma or cannot afford treatment.”

Suggested read: Here’s the problem with telling women that their power lies in their sexuality

Most recently, Lovato has taken up a new social justice initiative: female sexuality. One might not necessarily think of female sexuality as a cause that needs championing, especially given that the introduction of the pill in the 1960s sparked a major female liberation movement. For the first time, women could claim control over their reproductive lives. With this sole power over their fertility, they subsequently gained sexual autonomy and were no longer resigned to having sex within the confines of marriage. Whereas only half of unmarried nineteen-year-old girls had premarital sex in 1960, 5/6 of eighteen-year-old girls had sex by the late 1980s in the United States. Economic growth has also been attributed to the introduction of female birth control and its availability to college-age women. The economists Claudia Goldin and Lawrence Katz found that, “The pill lowered the cost of pursuing a career through its direct effect on the cost of sex and its indirect effect of increasing the age at first marriage generally.”

Though the pill affected numerous positive cultural and economic effects, a similar effect on the social perception of female sexuality has yet to be seen. The stigma of having a child at a young age and out of wedlock is very much alive as is slut shaming — vilifying women for their sexual activity. In 2004, two sociologists Elizabeth Armstrong and Laura Hamilton interviewed a group of 53 college women over the course of five years (from their freshman year through their first year out of college). They found that all but five of these 53 women actively slut-shamed their peers. Interestingly enough, they also determined that despite the prolificacy of slut-shaming, the girls differed on their ideas about who a slut actually was and did not require actual evidence of sexual promiscuity before branding a fellow student as one. As a result, Armstrong defines the appellation “slut” as “a misogynistic catch-all, a verbal utility knife that young people use to control women and create hierarchies.”

What’s more is that there has always been a double standard in regards to sex and gender. Before birth control, men were also instructed by religious doctrine to be abstinent before marriage, but they were never made to feel immoral for failing to heed this dogma. They were open about their sexual conquests — because they were in fact seen as conquests versus moral indiscretions — and that much is true even today. On the other hand, women are still told from multiple sources that sexuality is something to be eschewed, that their worth is tied to their virtue, and that power is gained from virginity.

When female sexuality is not openly condemned, it remains a silent and taboo topic. Only 23 states mandate sex education and even the most of in-depth of these classes focus on women’s internal parts (uteruses, fallopian tubes, and ovaries) without any discussion of female external genetalia.

“Whereas men’s puberty is often characterized in terms of erections, ejaculation and the emergence of a near-unstoppable sex drive, female’s is defined by periods and the possibility of unwanted pregnancy,” writes Peggy Orstein, author of the book Girls and Sex: Navigating the Complicated New Landscape. “When do we explain the miraculous nuances of their autonomy? When do we address exploration, self-knowledge?” she asks.

Suggested read: All the reasons why having sex on the first date is not that big a deal

This suppression of female sexuality is not only present in our sex ed classes — or lack thereof — but in the music we listen to. Male artists consistently sing freely about sex (In his song, Sex Tonight, Drake raps, “Bust that p*ssy open, then I tell her bring it back/Make sure you don’t fall in love/Cause I don’t have time for that,” to name one example). Female artists, not so much. And when they do, sex is not the result of pure, primal instinct; it is more often acknowledged as part of some sort of emotional relationship. While Tove Lo’s Talking Body is a catchy song about a female craving sex, some of the lyrics seem to suggest that sex is being traded for a meaningful connection. The Swedish artist sings, “Wanna keep you here/Because you dry my tears” and “If you love me right/We f*ck for life.” In an equally popular song, Work From Home, the girl group Fifth Harmony confesses their sexual desire, but despite this lust, the partner they are singing about is still the “boss at home.” Ty Dolla $ign’s rapping during the song’s bridge is also focused on the partner’s sole pleasure: “Can you make it clap/no hands for me?/Take it to the ground/Pick it up for me.”

Though there is no right or wrong way to participate in a sexual relationship — any relationship can be right if both partners feel safe and respected and that their needs are being met and taken into consideration — Demi Lovato’s new single Body Say appears ground-breaking in its approach to female sexuality. The sensual pop anthem celebrates women wanting sex for the sake of pleasure, but also reveals the limitations placed on and felt by women in pursuit of that pleasure. Though we are unaware of the intended relationship status between Lovato and the partner she is singing about, it is almost irrelevant in this song. What is relevant is that Lovato feels as though she can’t act on her sexual desire. “If I had it my way, I would take the lead/And if I had it my way, I would take you deep,” Lovato sings. But she doesn’t have it her way; the fact that she is a woman and is supposed to be demure and submissive in sexual interactions holds her back.

“And if my body had a say, I would come again,” she continues. Again, the lyrics suggest that she does not have the freedom to express this sexuality. Her body wants to come, but her mind is preventing her because Lovato, like the majority of American women, has been instructed that female sexuality is wrong.

The refrains and bridge of Body Say are perhaps the most powerful parts of the song, however. In them, Lovato explicitly states, “I want your sex.” With this one line, she asserts herself as a sexual being, as someone who wants to be pleasured, an unfortunately courageous thing for a woman to do. In the bridge, Lovato perseveres over the misguided notion that she shouldn’t have sexual autonomy: “My mind’s getting in the way/Can’t feel what my body say/I’m a show you anyway.”

In three minutes and 14 seconds, Lovato fights against an age-old and highly toxic narrative that women have been told about their own sexuality and acknowledges that her actions are being policed by a morality myth. She asks the questions we all need to ask ourselves: Why shouldn’t women cultivate their sexuality? Why shouldn’t they have sexual needs and seek to fulfill those needs?

Suggested read: Seeing the through the lies of feminist men who only claim to be feminist

Women are not immoral or wrong for wanting sex, and although most of us understand and agree with the logic of this concept, many of our words and actions do not reflect it. It’s important to recognize our complicity in perpetuating these unhealthy attitudes about female sexuality, especially given the fact that it is not only connected to sexual pleasure, but a host of other issues, such as gender inequality, economic disparity, violence, physical and mental health, and power dynamics.

We all should, because we all are. 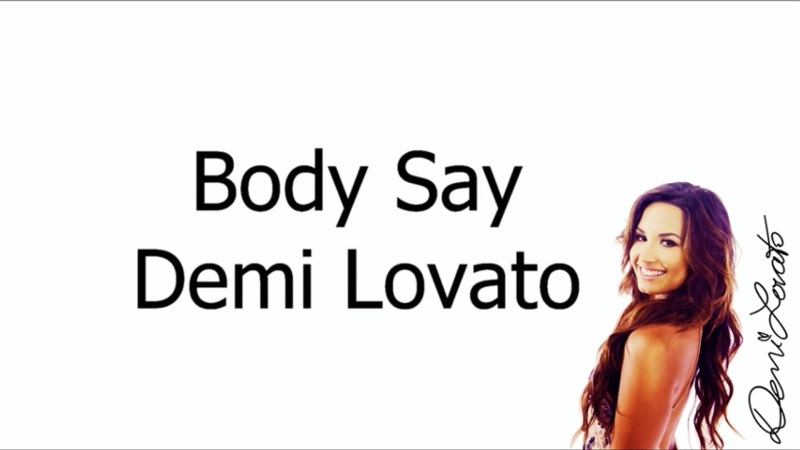 Article Name
What Demi Lovato’s Single Body Say Can Teach Us About Embracing Female Sexuality
Author
Gwen Aviles
Description
Though there is no one way to participate in a sexual relationship, Demi Lovato’s single Body Say seems ground-breaking in its approach to female sexuality.

Gwendolyn Aviles is a donut devouring dog-lover with a Brooklyn attitude. She is a currently a senior at Cornell University where she studies English and Theater. Gwen writes about social justice issues, art, books, and what it means to be a modern day woman. She fully believes in the power of the pen and hopes to help others live informed and better lives with her writing.