Why Women Need To Stop Competing And Start Collaborating!

Female Rivalry is one of the most redundant and toxic concepts we have been fed throughout ages. An internal and unjustified hatred for anybody identifying me by my sex is regressive and dangerous, to say the least. While we fight for Feminism and respect, we often forget to execute those principles in our daily dealings. Women need to stop viewing each other as vicious competitors, and start thinking of them as comrades in the Godforsaken War of Humanity.

The concept of female rivalry was not born out of vacuum, and neither has it developed without an impetus. Our discussion here tries to uncover the root cause of an unrealistic hatred running through generations of women, the circumstances under which they have grown, and the theory of collaboration as a way of empowerment and friendship.

Disclaimer: Forgive me for using predominantly heterosexual lingo throughout the discussion. Please alter the pronouns wherever needed. The crux of this discussion applies to everybody. My sincere apologies for not being able to include all pronouns extensively.

Suggested read: Women On Tinder, Do You Still Consider Yourself A Feminist?

There is something inherently problematic about intra-sex struggle. At the risk of generalizing, I’d like to ask if you frequently see men picturing women as competitors or vice versa. In the 21st century, post several Feminist waves, it seems regressive to hold ‘sex’ as the battlefield for survival. The main crux of the Equality Principle is to view all human beings as just that: Humans. Despite that, we still feel more antagonistic towards our own kind.

The root of this abnormal distinction lies in age-old unnatural binaries. I’m talking about a collective consciousness that forces us to view situations in either black or white. This is also why a large portion of the population has failed to understand that gender is a spectrum and not a choice between opposites. Speaking of intra-sex rivalry, men have been categorized as strong, aggressive, and powerful, while women are thought of as soft, kind, and submissive. If you observe carefully, we have all discredited men or women for deviating from these norms. I have witnessed men being offended when a woman is assertive, and women bad-mouthing men who aren’t physically powerful.

Award shows have separate categories for men and women, even though it is the same art. I am grateful that the Nobel Prize or the Man Booker Prize make no regressive distinctions along these lines. However, it is to be noted that the Entertainment Industry has a far wider reach in terms of audience, than any other. Some award shows have revised their discourse by changing “Best Actor” and “Best Actress” to “Best Actor Male” and “Best Actor Female”. But that hardly does anything to solve the divisiveness of the venture. If our field of competition is repeatedly, and widely restricted to our own sex, it becomes the only field we know. Normalizing divisiveness is dangerous in a world fighting for equality, and the grass-root levels are where change must begin.

This is the same argument that thousands of people put forward regarding beauty pageants, or fairness creams; it normalizes the superiority of an unnatural standard of beauty. Similarly, if we continue to categorize men and women separately, in all spheres, we are normalizing discrimination on a regular basis, and negating the basic tenet of equality.

Women have been taught to perceive other women as obstacles, all through our lives. I will cite an example very close to my heart:

Based on Davis Buss’s work, the Canadian researchers Maryanne Fisher and Anthony Cox explained the principle of ‘mate manipulation’. Very similar to Darwin’s “survival of the fittest”, this principle speaks about how we want to negate future possibilities of our lover’s liaisons, while we’re still in the lead. This means obsessively ensuring that they do not show any hint of affection to any other woman. However, more problematically, this also means that we hate on the women who (according to our judgement) try assuming our spot. It stems from a deep source of insecurity, but culminates into latent misogyny over time.

Another reason behind female rivalry is the social conditioning that makes us believe that men are beyond our reach. Simply on the basis of sharing the same pronoun, we take the liberty of assuming that our toxicity towards each other is fair game.

Despite constant efforts of the Feminist principle, we have imbibed the corpus of patriarchy’s oppressive viewpoint. Psychology Today reported on an experiment by Canadian researchers Tracy Vaillancourt and Aanchal Sharma. The research endeavored to demonstrate how women discriminate against each other on the basis of appearance. Participants were made to interact with a research assistant in two groups. The first group saw her in “revealing clothes”, while the second saw her in a jeans and T-shirt. While tallying responses, the researchers discovered that the first group criticized and bad-mouthed her, while the next group ignored her completely. “This study (and others) supports the evolutionary prediction: a more attractive woman (i.e., one who has more of what men like) will receive more hostility and less cooperation from other women because her presence threatens their own access to the evolutionary prize.”

The role of media and influencers in female rivalry

When you are in a position of power or influence, you must assume the responsibility that comes with it. That means claiming ownership of your discourse, and refraining from actively spreading harmful messages. In the Celebrity World, there are too many people who have made a mockery out of civilization. Be it the unnecessary fights between female stars, or the media’s exaggerated portrayal of one when there isn’t any hostility; society has forced women against each other.

The complicated hate triangle between Katy Perry, Taylor Swift, and Kim Kardashian, is probably something that all of humanity is aware of. Now, I would like to establish that it is humanely impossible to like everybody. But trying to actively destroy somebody is taking things to the extreme limit of the spectrum. Taylor Swift and Kim Kardashian have enormous fandoms that they regularly pit against each other. Amidst a horde of cryptic comments and toxic fan-battles, we often forget what these celebrities are actually famous for. Women need to understand how much progress is undone every time they let societal assumptions win.

Closer home, in almost every award show where Amitabh Bachchan takes the stage, the camera oscillates dramatically between Rekha and Jaya Bachchan. It is as if the two elite moguls are expected to indulge in an instant cat-fight. In a way, when we bring artists down to such petty and possibly non-existent rivalry, we negate the entire body of their work.

This discussion does not discourage competition. It has been proven via various researches that competition happens to be a credible and vital impulse for success. The fear of falling behind or failing is crippling, but extremely effective when it comes to achieving goals.

Practicing healthy competition is an important Life Skill. Too many people fail to understand that one can climb up the ladder without pulling another down. The world is big enough for all of us to do what we love. Instead of trying to be better than A or B, focus on honing your craft to the best version you could possibly offer. Imagine actors boycotting movies that did better than theirs. Or, students antagonizing a classmate who earned a lot of marks. Having faced the latter first-hand, I can vouch for how scarring that would be.

Everybody has the option of working hard. Use your potential to create greatness instead of wasting it on developing destructive tactics. Mind games look good on a screen, but in real life they are unnecessary and at par with Global Warming in the question of the planet’s destruction. Don’t contribute to an already deteriorating human race.

Some women have recognized and fought against this norm

Lilly Singh launched the ‘Girl Love’ campaign and revolutionized a significant portion of the media space. The basic tenet of the campaign lies in spreading love and triumphing over hate. As established earlier in the conversation, we are constantly pitted against one another. We must actively try to break the mold and offer support instead.

Ellen DeGeneres is a household name even for people uninterested in day-time television. Oprah Winfrey is also widely acclaimed. One would think of them as bitter competitors, embroiled in a gross race for TRPs. On a happy contrary, they are close to being best friends. The duo often mock and tease the societal construct of their imminent rivalry, further negating the possibility of it.

On Koffee With Karan, several actresses have “surprisingly” gotten along very well. These goddesses have gone on to explain how unnatural it is to expect women to constantly fight each other. It is a regressive mentality and most of them are great friends.

Collaborate and hold each other up

The Equality Principle or Feminism works like Community Agriculture. You pool in the maximum effort and resources that you can, and divide the benefits amongst yourselves. Imagine a war-scene. You see the camaraderie between soldiers, born out of being stuck in the same deplorable conditions? That’s what this world is like.

If you’re a singer, invite a lesser known artist to the show. Give shout-outs to follow your favorite creators. Collaborate in your ventures. You might find the product to be something greater than either of you are individually capable of. In a well-thought collaboration, artists fill in for the others shortcomings, and uphold each other’s talents. It’s a great way to build a community, a friendship, a family, and realizing that society has been messing with our heads for centuries.

Women need to recognize the lies they have been fed about intra-sex rivalry. A large part of the Feminist discourse focuses on internalized patriarchy, and how we as women also serve as our own oppressors. This world could benefit from some light-hearted women friendships making Patriarchy fall flat on its face. So, disown the latent misogyny and, as Ellen says, be kind to one another. 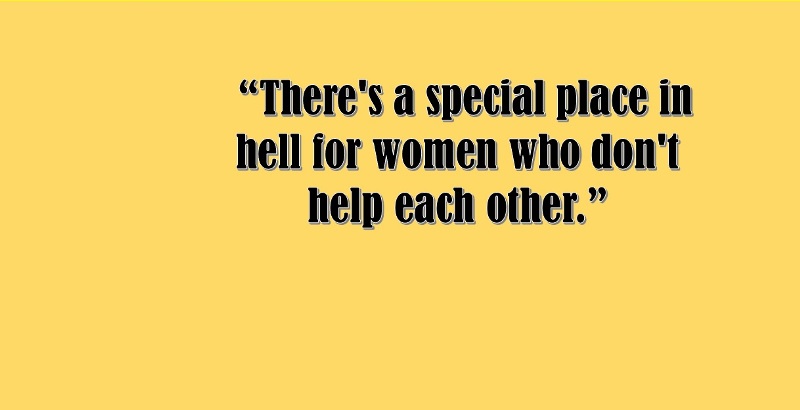 Article Name
Why Women Need To Stop Competing And Start Collaborating!
Author
Meghalee Mitra
Description
Women need to stop viewing each other as vicious competitors, and start thinking of them as comrades in the Godforsaken War of Humanity.