There are several adjectives one could use to describe the history of photojournalism in India. For a country teeming with stories, history, culture and artistry, photojournalism became a catalyst for expression; a means to record and catalogue some of the most important political and cultural events in the country, the moment film came into existence.

The world of photojournalism is strewn with famous names that are still taken with reverence today. People like Raghu Rai, Dayanita Singh, Sunil Janah and Pablo Bartholomew are considered global stalwarts in their field.

The Leica camera was invented and released in the market in 1925, and it was immediately adopted by the Indian media. The media, along with most other professional fields, was considered the domain of me, and during the early half of the 20th century, women were still disallowed from participating actively in public life. The British Raj was still prevailing in India, and independence from the British crown was still several decades away. It was in such a culturally and politically restrictive environment that Homai Vyarawalla was born in Navrasi, Gujarat, on December 13th, 1913.

She hailed from a middle-class Parsi family, and attended the JJ School of Arts in Mumbai, after a brief stint at St. Xavier’s College, where she completed her diploma in Arts. During her college days, she was introduced to photography by a friend, and because Bombay was a new city, she spent her days cataloguing her experience through her lens, and thus, the seeds of a very colorful career had been sown.

Homai Vyarawalla decided to take up photography professionally after she met and married her husband Manekshaw Vyarawalla, who was working as a photographer and a part time accountant with the Times of India. She began her career in 1938, and initially, she want allowed to publish her work under her own name. Her photos started appearing in the Times of India either under the name of her husband, or under the pseudonym “Dalda-13”, which was derived from the registered name for her first car- DLD, and her birth year- 1913. Coincidentally, she also met her husband- Maneshaw Vyarawalla- when she was 13 years old.

After her work starting gaining prominence in Bombay, she moved to Delhi with her husband and started working for the British Information Services. It was during her stint with the BIS that she got to photograph important and iconic world leaders such as the Dalai Lama, Ho Chi Minh, American President John F. Kennedy and his wife Jacqueline Kennedy, and also Queen Elizabeth II during her official State visit.

She became a common sight on the streets of Delhi, clad in a simple cotton saree and equipped with her Leica camera, clicking away and presenting the world through her lens. In an interview with The Hindu, she said:

“There are 15 people taking a photograph at the same time; each has his own style. But there’s only one who gets the right moment and the right angle.”

Her ability to capture the “right moment at the right angle” and present such a lively picture of the same became her strength and she became one of the most well-known photojournalists in India. Her most prominent work, however, appeared during the final struggle for Independence, and during post-independence India.

Suggested read: 7 Most Influential And Famous Feminists Of The Modern World That Everyone Should Look Up To

One of her favorite subjects of photography was the first Prime Minister of India, Jawaharlal Nehru. She is known for immortalizing the moment that he raised the Indian flag over the Red Fort in Delhi on the morning of 15th August, 1947. She was also present during the funerals of Mahatma Gandhi, Lal Bahadur Shastri and Jawaharlal Nehru. She even recorded the final departure of Lord Mountbatten from India, through her iconic photographs.

Her husband passed away in 1970, which signaled the end of her career, and she retired soon after. She moved to Vadodara with their son Farooq, who died of cancer in 1982. In 2010, the I&B Ministry awarded her with a Lifetime Achievement Award. In 2011, she was awarded the Padma Vibhushan, the second highest civilian honor awarded by the government of India.

Her invaluable contributions to the world of photojournalism have been recognized all over the world, and you can read more about her art and her work in her biography titled Camera Chronicles of Homai Vyarawalla (2006) by Sabeena Gadihoke.

She is remembered not only because of her contribution to the art of photojournalism, and not only because she was one of the first photojournalist to gain prominence in India, but because she was a woman in a man’s world, doing things that women weren’t allowed to do during her time. Her courage, talent and perseverance will forever be commemorated and her legacy shall live on, and she continues to inspire hundreds of aspiring journalists and photographers, even today. 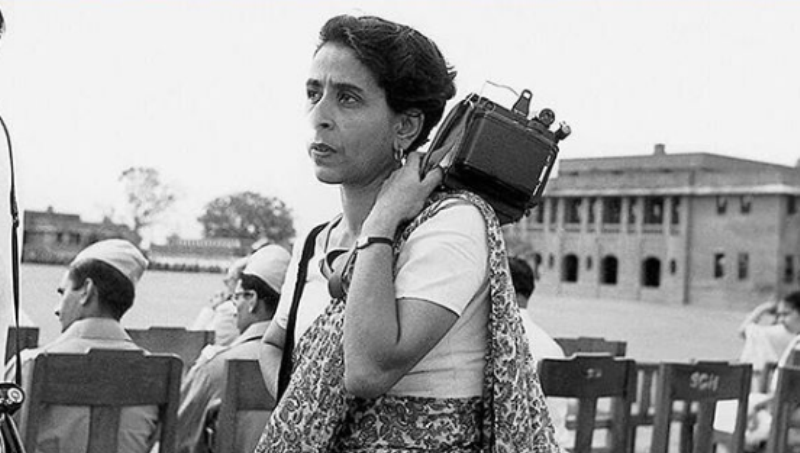