“Life is not easy for any of us. But what of that? We must have perseverance and above all confidence in ourselves. We must believe that we are gifted for something and that this thing must be attained.”

Marie Curie (Maria Sklodowska) was a Polish scientist born on the 7th of November, 1867, to a couple of poor school teachers. She was the youngest among 5 children. When her mother died, her father alone could not support all the children, and so Curie started working as a governess. She would study whenever she could find little pockets of time to quench her insatiable hunger for knowledge. To her, seeking knowledge was a passion.

She explored different avenues that would make her financially independent as well as allow her to study. That’s when she came across the profession of teaching, and realized how that would perfect for her. However, that didn’t happen because she could not pay for her formal higher education that would allow her to teach. In 1891, Curie’s sister offered her lodgings in Paris, and so she moved to France to enroll herself into a university.

Curie got admitted to the Sorbonne University in Paris. Here, she studied physics and mathematics, two subjects that she absolutely loved. She realized that her appetite for learning these disciplines could never be satisfied.

“I am among those who think that science has great beauty. A scientist in his laboratory is not only a technician: he is also a child placed before natural phenomena which impress him like a fairy tale.”

In 1894, Marie met Pierre Curie, a scientist working in Paris. The two got hitched the following year. Around the same time, Curie adopted the French spelling of name (Marie).

Marie and Pierre Curie started working for the School of Chemistry and Physics in Paris as research fellows. It is here that they started their phenomenal work on the invisible rays emitted by uranium; this phenomenon had been recently discovered by Henri Becquerel, a professor, who had shown that the rays emitted by uranium can pass through solid matter, fog, and photographic film, and that it caused air to become a conductor of electricity.

Marie discovered that samples of pitchblende, a mineral that contains uranium ore, were more radioactive than uranium in its pure elemental form. By digging deeper, she found out that the very large readings she was observing could not be a result of uranium alone, but that there was something else present in pitchblende which was causing the activity. It was evidently present in very small quantities because of which no other scientist had found it before. While Marie was sure to have discovered a new element, others weren’t as convinced of her results.

The couple started working on the mineral together as a team. They ground of pitchblende samples and then dissolved them in acid. They started separating the elements present with the help of a standard analytical chemical technique that was very popular at that time. Consequently, the duo extracted a black-colored powder which was 330 times more radioactive than pure uranium. They named it polonium, with atomic number 84.

The Curies decided to investigate further. They discovered that the residual liquid left behind after the extraction of polonium was radioactive too. After realizing that the residue contained another element more radioactive than polonium, they worked day and night to determine it. This element was in ever smaller quantities which made it very difficult for the Curies to unearth it.

In 1898, the couple published consequential evidence supporting their claims of the existence of another new element radium; however, they still had no proof of it. Pitchblende is a pretty expensive mineral and the two needed a lot of the same to conduct further examination.

Marie contacted a factory in Austria that, for industrial use, removed uranium from pitchblende.  She bought the residue from them, which was cheaper now that it didn’t contain uranium. She started processing the pitchblende and extracted tiny quantities of radium. For this, she had to work on a very large scale; she would have to work with 20 kg batches of the mineral, grind, dissolve, filter, precipitate, collect, re-dissolve, crystallize, and re-crystallize the same.

The work involved radioactive material, and as it obvious, it started taking a toll on the physical health of the Curies. They started feeling physically exhausted and sick, and today we call that the early symptoms of radiation sickness. The couple ignored their health, and continued working with inflamed hands.

After an arduous and painstaking journey, in the year 1902, Curie isolated radium as radium chloride, and determined its atomic weight to be 225.93.

“I was taught that the way of progress was neither swift nor easy.”

Marie and Pierre Curie were awarded the Nobel prize for physics jointly along with Henri Becquerel in 1903. They were awarded jointly, though they worked separately on radioactivity. In that year, Marie also completed her doctoral thesis in radioactivity.

Three years later, Pierre died in a street accident when he was knocked down by a horse cart. Marie was devastated. However, her unconquerable spirit helped her continue her research. She went on to succeed Pierre in his Chair as Professor at Sorbonne. She carried on lecturing from the point that he had abandoned.

In 1911, she won a second Nobel prize for her efforts in Chemistry. She had created a means for gaging radioactivity. With this information, Sorbonne built the first radium institute in the work. It had two laboratories; one for a study of radioactivity under Curie herself, and the other for biological research to cure cancer.

Once the First World War broke out, Curie started working on small portable X-ray units that could diagnose injuries at the battlefront. She was the Director of the Red Cross Radiological Service, and as such, she toured all over Paris to ask for money, supplies, and vehicle that could be used.

In 1914, Petits Curies, the first machines, were built. Marie set off with those to the front. Her daughter Irene, 17 then, worked closely with her at casualty clearing stations. She would X-ray the wounded men and locate fractures, bullets and shrapnel.

Petits Curies used a technology similar to what we use in fluoroscopy machines today. It is a powerful X-ray machine that let doctors examine moving images of bodies (for example pumping of blood by the heart or the motion of swallowing).

After 1918, Curie received several awards for her role as a researcher teacher and head of the laboratory. The most remarkable ones were the Ellan Richards Research Prize (1921), the Grand Prix du Marquis d’Argenteuil (1923) and the Cameron Prize from Edinburgh University (1931).

She was also the recipient of many honorary degrees from universities around the world.

“You cannot hope to build a better world without improving the individuals. To that end, each of us must work for his own improvement, and at the same time share a general responsibility for all humanity, our particular duty being to aid those to whom we think we can be most useful.”

On July 4th, 1934, at the age of 66, Marie Curie died at the Sancellemoz Sanatorium in Passy, France. According to doctors, she was suffering from an aplastic pernicious anemia, which she had developed because of years of exposure to harmful levels of radiation. Curie left two daughters, Irene and Eve.

Irene became a scientist like her mother, and along with her husband Frederic Joliot, worked on the nucleus. The couple was awarded a Nobel Prize for discovering artificial radiation. Irene died of 1956, due to leukemia (radiation-related illness).

Eve went on to become a journalist and writer.

Marie also became the first woman to be awarded a place in the Pantheon for her achievements. In 1995, Marie and Pierre were reburied in the Paris mausoleum which is reserved for the most respectable in France.

“Humanity also needs dreamers, for whom the disinterested development of an enterprise is so captivating that it becomes impossible for them to devote their care to their own material profit.”

That is all we have in today’s post on Marie Curie: The First Woman To Win A Nobel Prize. Let us know if you enjoyed reading this and if this was helpful. In case we missed out on some more interesting facts about this remarkable physicist and Nobel Prize recipient, please add them in the comment section. 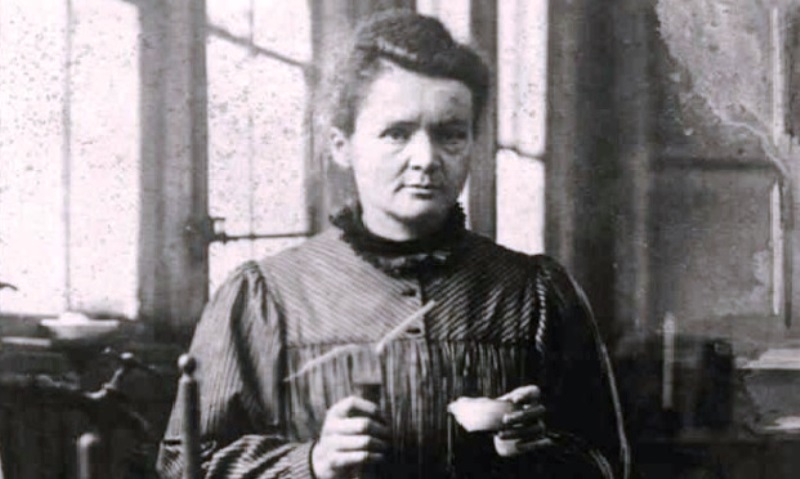 Article Name
#WonderWomen Marie Curie: The First Woman To Win A Nobel Prize
Author
Riya Roy
Description
Women's Day is a month away and we thought we should compile a list of most remarkable women firsts from around the globe. Today's post is about Marie Curie