Is There A Predominance Of Male Symbols Of Worship?

In a recent lecture on the West’s perspective of Ramakrishna, Dr. Krishna Sen spoke about Girindrashekhar Bose contesting the Oedipal complex in the Indian context. The early psychoanalyst of the subcontinent rubbished the generalizing of Freud’s theory, on the account of Indians being accustomed to female goddesses. To elaborate on the issue: Bose spoke about the rigidity of popular Western religion, its lack of space for a female deity, that leads to the near impossibility of viewing a woman as divine. In India, on the other hand, the Mother-motif is sacred. In fact, we often use the premise of the female as a reproductive agent, to ward of sexist remarks or frequent eve teasing. It is easier for the Indian male to view the woman as sacred, and therefore widely resist the Freudian Oedipus complex.

The lecture, at first, made me minutely proud of another wise dilapidated culture. However, that pride did not last very long. Not only has this unique difference done nothing to ward of widespread harassment, but it is outrageous that a male deity “overlooks” the acts of the female.

Yes, Durga did destroy Mahishasur. Yes, good did triumph over evil. Yes, it was done by a popularly depicted saree-clad sanskaari naari, whose ten hands are often compared to the average woman’s skill of multitasking. We haven’t even spared our gods from cultural appropriation. But the issue that is worthiest of outrage, is the tiny (or enormous, depending on the budget and political leanings) image of Shiva that presides over it all. Sometimes it is incorporated into the ‘murti’ itself. At other times, there is a framed photograph of him hanging from the heavens. He is always above the woman. I mean, let the goddess have a MINUTE of limelight, will you?

In one version of mythological reading, the goddess Kali is said to have burst out of Parvati’s forehead, in the latter’s fit of rage. She then proceeded to exterminate all evil, while mounting the severed heads on a chain around her neck. Pretty badass, eh? But Shiv, being the patriarchal force of All-That-Is-Right, lay down before her to stop her rampage. Killing demons is obviously very un-godly. So, when Kali steps on Shiv, she realizes the enormity of her mistake (how dare she touch a man with her foot?) and ends her hunt. Till date, the Kali ‘murti’ is built with her tongue sticking out in shame.

These are the female deities we are supposed to be proud of worshiping. I mean, if a man lay down in my field of killing, I would probably stamp the daylight out of his esophagus. I suppose that is why I am not a god. Yet.

Stepping onto a different variable, let’s look at the term “eve-teasing”. The South-east Asian quadrant has used it enough for the term to be accepted as daily parlance. Granting it the nature of colloquialism only serves to prove how far we are on the ‘harassment’ scale, but that is no surprise at this point.

“Eve-teasing” is, in fact, a Biblical reference; one with much deeper connotations than we normally attach with sleaze-talk. As the Holy Bible states, Eve was made from the rib of Adam. As a symbol of womankind, Eve’s creation has marked our place in the gender hierarchy. We are subordinate, lesser beings, made to vanquish the loneliness of men in our perpetual Eden of misogyny.

As the myth suggests, “mankind’s greatest sin” was instigated by Eve. Despite God’s repeated instructions forbidding the consumption of fruits from the Tree of Knowledge, they did it anyway. Wait. Did I say “they”? I meant Eve. It is suggested that Eve was the one who tempted, and eventually influenced Adam to take a bite of the apple. At the risk of sounding like a pioneer of misandry, I want to mention that if you think a woman can “influence” a man to bite an apple, you haven’t really seen too many of them. Lo and behold, they realized they were naked. Standing at the brink of a nuclear apocalypse, nudity is obviously still the relevant reason to be thrown out of Paradise. It must not be contested.

So, “eve-teasing” refers to Eve’s act of betrayal; the Oxford dictionary defines “teasing” as: “to tempt someone sexually with no intention of satisfying the desire aroused.” Of course it is the woman’s fault. Are you even surprised at this point? Do you see the blatant misogyny we have been feeding children for decades, in the name of practiced religion? Do you see the hierarchy of the Gods? The predominance of male symbols of worship? The limitations of a female in power?

Eve was not Adam’s first wife, though. In two contradictory accounts, the Creation of the first human pair seem different: 1) God made both man and woman simultaneously. 2) God made Adam, realized he was lonely, made animals to entertain him, and finally crafted Eve from his rib.

The first account speaks of Lilith, also known as the ‘first Eve’. This has been the crux of several Feminist readings, and rightfully so. Lilith was not submissive, and the pair would argue incessantly. Adam wanted to command dominance during intercourse, and Lilith refused to be at the bottom. Being severely unhappy in this union, Lilith decided to abandon Adam, called God’s name, and flew into the wind. God then sent three angels to (forcefully) bring her back to Adam, but she resisted.

Sounds like the Beyoncé of mythology, doesn’t it? I would readily place this woman on an alter and worship her with fresh (metaphorical) blood. However, that isn’t necessarily how society thinks of her.

In the majority of Jewish folklore, Lilith has been relegated to the position of a demon. She roams the plane in search of sleeping men, who she copulates with, to produce demon spawns. She is also used as an agent of terror, whereby Lilith has been vested with the powers of arbitrarily touching newborn children with disease. Because that’s what a scorned woman does. Curse.

The lesson we take away from this is: You are either a sex toy or a witch. There is no in-between. Woman and choice are not synonymous. Don’t be ridiculous.

“Greek and Roman star configurations depict men as conquerors and heroes, while women are victims and bit players…classical mythology is deeply misogynistic, and using it to identify celestial bodies contributes to a scientific culture that diminishes the achievements of women like Caroline. Male deities and figures reign with nearly unlimited power, while their female counterparts suffer violence and humiliation…In the cosmos, women are portrayed as either monsters or domestic nurturers.” (The Constellations Are Sexist)

In Blythe Baird’s ‘Girlcode 101’, she says: “Give me a God I can relate to, commandments from a voice both soft and powerful. Give me one accomplishment of Mary’s that did not involve her vagina.” Misogyny and patriarchal standards have never been restricted to the mortal plane. Instead of man being made in the image of God, we have crafted gods in the image of a ruined society. It is quite convenient to give more power to male symbols of worship in a world that cannot stand the dominance of the female. Speaking of developed countries, the First World union of U.S.A refuses to elect a female President, even in the 21st century. They would rather have a homophobic TV star as their 45th President, then the lesser evil of a woman. Is it the non-acceptance of the female in religion, that makes it so? It is all the years of viewing Mary as a minority? Would America be in better hands if thousands of years of social conditioning involved at least one female symbol of worship? It is hard to tell, really.

The blatant sexism predominant in society can be easily gauged from the 2000-years of slut-shaming Mary Magdalene. She was one of the first followers of Christ, the last one to have witnessed his crucifixion, and the only one to have viewed his empty tomb and subsequent resurrection. Many sermons refer to her as a “forgiven prostitute”, which she was not. This is the price one has to pay if they dare to be equal in a circle of men. If a woman shows too much interest in the gathering of men, or in one man in particular, then she must be a filthy “seductress”. We have not spared even the sacred. While Mary is shamed for keeping Christ’s company, the latter has never been dragged into this conversation. He has the God-ticket as an escape. Nobody ever draws the man into the argument. It is much easier, and way more convenient, to keep raising fingers at the female kind.

The patriarchal supremacy of male symbols of worship is no longer limited to texts or shrines. We live and breathe the religion that we devote our lives to. Even as an atheist, nobody escapes the claws of social conditioning. It is, therefore, imperative that we reclaim responsibility of what we call sacred, and reform our history with the hope of a better future. Either that, or we could spend the rest of our lives organizing picnics while burning witches at the stake. 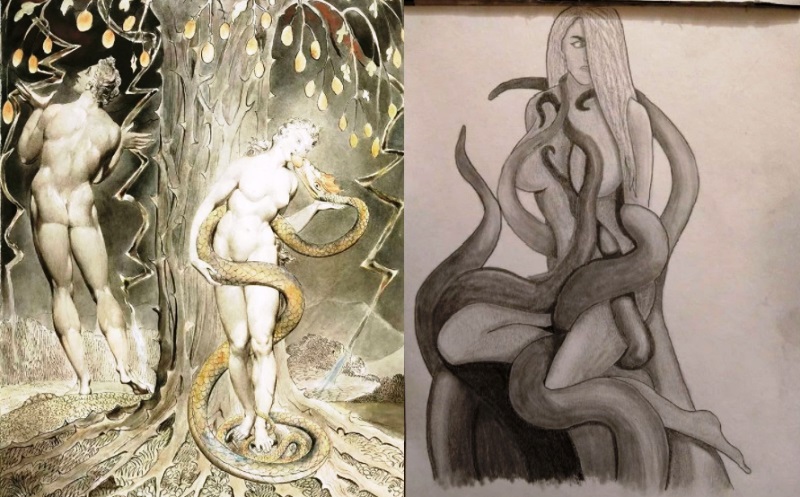 Article Name
Is There A Predominance Of Male Symbols Of Worship?
Author
Meghalee Mitra
Description
The patriarchal supremacy of male symbols of worship is no longer limited to texts or shrines. We live and breathe the religion that we devote our lives to.