10 Most Awaited Hollywood Movies Of 2017

Last year was a record-breaking year for Hollywood movies. We saw some amazing original stories, adaptations, tons of sequels, biopics and musicals. But according to sources, 2017 is going to be even bigger! 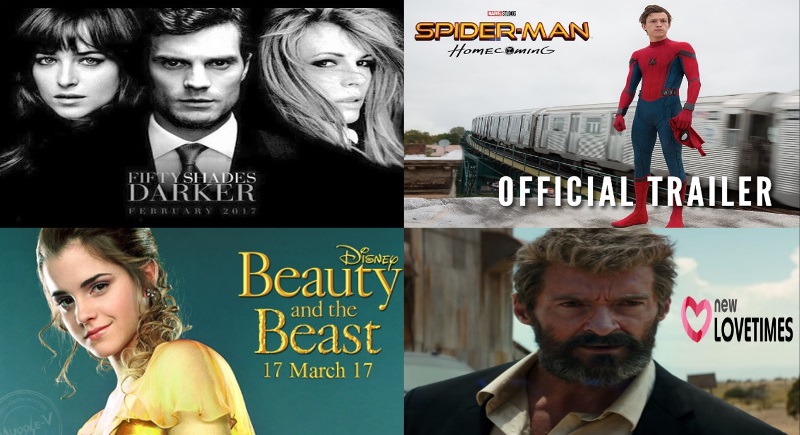 Here are 10 Hollywood movies 2017 is all set to showcase.

Suggested read: #BestOf2016 Blink and miss: The most underrated movies of 2016

After Kelly Marcel’s departure, finding a new writer was trying. Nonetheless, Fifty Shades Darker is up for a release in 2017. E. L. James’ husband, Niall Leonard, has stepped in for Marcel. The movie is directed by James Foley. Fans have had to wait long for the sequel, but since they are equally passionate as they were when the first installment of Grey, we are sure the wait’s only going to increase their longing (hunger! ;)) for the film.

Will Arnett’s portrayal of Batman in The LEGO Movie stole the show. This time round, expect the video game franchise, LEGO, to take another IP for a spin, and yes, in a building block form! Though the storyline is not revealed yet, we are more than certain that this one is going to be hilarious and will also be a tribute to all Batman portrayals.

Hugh Jackman as The Wolverine for one last time, can anyone miss that? Well, we don’t think so! James Mangold is set to reprise his directing responsibilities after The Wolverine. This movie is set in the future. It revolves around a world where mutants are extinct, and Logan and Charles Xavier (played by Patrick Stewart) live undercover. This movie is all about signing off with a bang!

King Kong in this day and age? LOL, right? Well, the fact that Legendary has got the rights to this legendary character shows how this outmoded, often mocked monster can be transformed into a modern menace!

With Brie Larson, John C. Reilly, John Goodman and Tom Hiddleston added to the mix, we know this flick’s going to be a box office giant!

Cinderella and The Jungle Book proved that fans are no tired of Disney movies, rather they crave more! To replicate the glorious box office success, we will see Beauty And The Beast hit the big screen, this year. Director Bill Condon has taken on him the responsibility to refashion a page from our babyhood. Emma Watson and Dan Stevens have been cast as the lead pair. The cast also includes Luke Evans and Joh Gad. We are cent percent confident that this one’s going to be a visual treat for all, children and adults alike.

6. The Fate of the Furious

After Paul Walker’s character for a fitting end in Furious 7, we were doubting if a Fast 8 would ever be made. However, thanks to Vin Diesel, The Fate of the Furious is gearing up for release, this year. In The Fate, Vin’s character, Dom, is turning to the “dark side”, folks. However, what will be of interest us how Dom’s family rally him to the good side again. To find out, go to the theatres this April.

Don’t you miss Rocket Raccoon? Well, you need not wait no more; the sequel is almost here! What is more, James Gunn promises that this one’s going to be the father of all conflicts! I didn’t say mother of all conflicts coz this one’s all about the dads! The entire crew is back, and we are sure it can coz complications for The Avenger, someday soon. What do you think? 😉

Following Batman v. Superman, and Suicide Squad, the DCEU has decided to expand with Wonder Woman slated for mid-2017. In Batman v. Superman: Dawn Of Justice, Wonder Woman’s1 character was introduced, and now she is all set to take center stage. Also, we are hearing that the “Bad Guy” is this flick is going to be someone earth shattering. God! We cannot wait!

This is the film that is going to bring us to the high school days of Peter Parker (played by Tom Holland). It continues the threads of what we saw in Captain America: Civil War. Apart from Holland as Spidey, we will see Michal Keaton play The Vulture. Also Jon Favreau (as Happy Hogan) and Robert Downey Junior (as Tony Stark) are up for the ride!

10. War For The Planet Of The Apes Sequel

The second part of Dawn Of The Planet Of The Apes is going to be one about diplomacy and war games, considering how humanity and the apes are equally divided now and the military is heading to San Francisco’s ruins. The series is going to be as strong as ever and as brutal as can be!

Suggested read: #WorstOf2016 Not a flying eff for A Flying Jatt: The worst movies of 2016

That is a wrap on Hollywood movies 2017. If we missed out on any film that you are really thrilled about, let us know in the comments. Hasta la vista!

Article Name
10 Most Anticipated Hollywood Movies 2017 Is Bringing With It
Author
Riya Roy
Description
We saw some amazing original stories, adaptations, tons of sequels, biopics and musicals in 2016. But, according to sources, 2017 is going to be even bigger! Here are 10 Hollywood movies 2017 is all set to showcase:.