As a Bollywood buff, I am guilty of watching most movies that hit the theatres. But to be honest, I am outright disgusted by the number of unwatchable films that Bollywood’s pouring out at the rate a newborn poops every single day- not to mention that they are a quality exactly like the diapers stink of! 2016 hasn’t been an exception in giving us some of these stinky buggers and as someone who’s possibly subjected herself to the 2.5-hour torture, apiece, I take it upon myself to let you know of the worst movies of 2016 to have hit the theatres – just so you save yourself on a day you are flipping channels think you have got nothing else to do. Trust me, my friend, ‘nothing’ remains, on any given day, a better thing than these worst movies ever! Okay- not ‘ever’ ever- but this year, for sure. 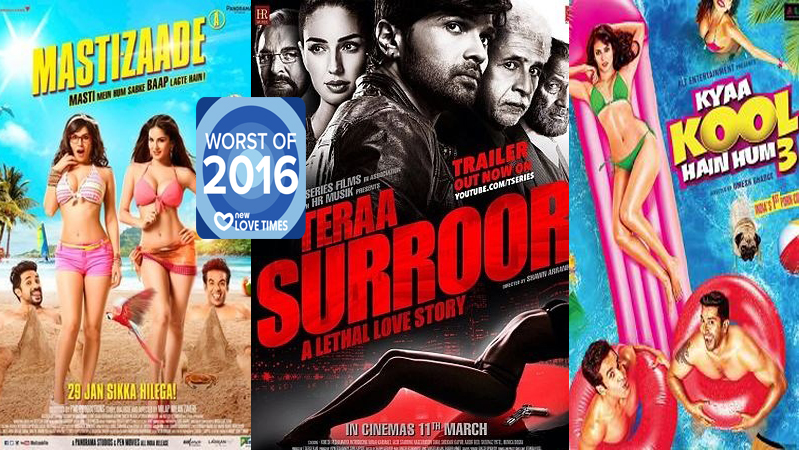 Suggested read: Here are the most “hearted” celebrity Instagram posts of 2016

Drawing clichés from Hollywood and adding a touch of Bollywood’s drama to it, this movie is the last thing you would want to watch even if you were subjected to the early-man days. With nobody giving any flying f*cks to A Flying Jatt, I think Remo should just leave directing films alone and stick to dancing instead. Or maybe not- after all ABCD2 was a big, dull dud too!

It is perhaps our fault that we gave Ekta Kapoor a chance to come out with the third instalment in the series! We’ve had enough of these mind-numbing sex comedies that mix a C-grade version of slapstick and an even worse grade of cheap innuendos for cheaper chuckles (if that)! We bet the producers were crying, after the release (which, owing to utter lack of wisdom, clashed with Airlift)!

Perhaps, the most stupid movie on the list (nope, that’s a tough call), this Tusshar Kapoor-Sunny Leone starrer should be the last shred of evidence for evincing an utter lack of acting skills! This rather ‘sasti masti’ cost the audience two-and-a-half hours of crassness that left them cringing instead of cracking up!

We get it- Sunny Leone is a stunner- but get this straight, folks- that’s not enough to pull off a two-and-a-half hour plot! What was an attempt to churn out a ‘desi’ Fatal Attraction quickly falls flat on the face with an inept plot, shallow performances and some mind-numbing tips (do peg maar aur bhool jaa- #$%^&*). For a film that wished to lash out against sexual double-standards, the film is riddled with misogynistic moments and erm, to be polite, fails to ‘stand’ out!

I don’t even know why the second instalment in the franchise was a hit either! The wrung-out-to-dry formula in sex comedies reaches a whole new level of dumbness and crassness in this script where (yes, you guessed it) our sex-starved boys fall for a ghost who died a virgin! What the f*ck- right? Except you’d have zero f*cks for the movie, just as the self-averred sex comedy has zero sex and zero comedy!

If veteran actor Boman Irani and the naturally funny Vir Das fail to bring the iconic comic couple Santa Banta alive, there must be something wrong on a deeper level with the movie- and there is! The amateur writing, inept humour and annoying screenplay makes the movie a muddled mess, evincing that you do NOT touch a classic if you cannot do justice to it! If you watch this one, the joke’s on you!

The reputation of the first one makes the sequel a hundred times more disappointing. After all, a joke repeated again raises lesser laughs! The problem is one of renewing the already slung-out joke and making a more tigher, coherent satire!

This one SHOULD strike the last nail in the coffin of Sunny Leone’s acting career! It is a cringefest that has stooped so low that it cannot crawl back up, even if it tries! No plot, no acting and no-thing to boot! Except sculpted body parts that the camera captures in lucid detail- but hey, we have seen ALL of it before- and it’s nothing new!

This rather-predictable underdog film that has Nargis Fakhri aka Chris seek out Riteish Deshmukh aka Tarrat and his ragtag band for an original sound has shouts for dialogues, non expressions for acting and a cliché plot for a story. If you need to try your patience, trust me, there are better ways to do that! Stay away and stay sane!

Tell us if we’ve missed out any other worst movies of 2016. There’s a comments section below.

Article Name
#WorstOf2016 Top 10 Absolute Worst Movies Of 2016
Author
Sejal Parikh
Description
Here’s the list of the worst movies of 2016 (and when you see them on, run, as fast as you can and as far away as you can)...