The candid, opinionated, and self-asserted ‘try-sexual,’ Samantha Jones, is the life of Sex and the City! Now tell me who could (even in today’s day and age), ever be as fabulous as she to throw a “No Baby shower”?! A successful publicist and a self-‘loveholic,’ Samy Joe ushered in a refreshing attitude to life and men in New York City in this 90s show! The Samantha Jones quotes I have compiled for you, reflect how impressive a character she was with a quirky take on life, relationships, love, and of course, sex!

When Samantha was detected with breast cancer, she challenged it head-on and the final episode speech she gave at a cancer benefit dinner received a much-deserved standing ovation. My respect for her grew by leaps and bounds when she removed her wig and disclosed that she had the hot flashes! Now, that is the bravest thing to do!

Suggested read: 35 Carrie Bradshaw quotes that are lessons on how to live, love, laugh

Since we “just believe in parties,” let’s celebrate some of these best Samantha Jones quotes on SATC that will unleash your Inner Diva. “Bring the cocktails!”

1. “I love you… but I love me more. I have been in a relationship with myself for 49 years and that’s the one I need to work on.” 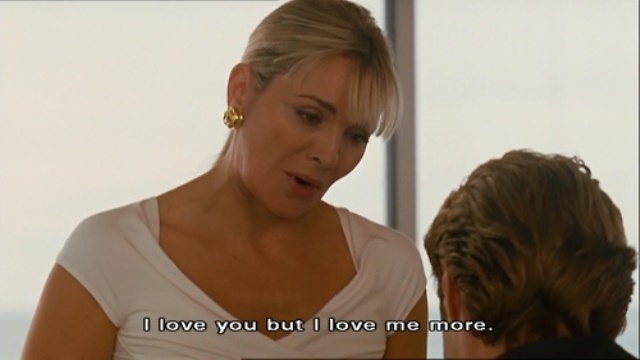 Self-love to the height of narcissism? Samantha couldn’t care less. She’s an extremely sexual woman, full of pride and oomph that anyone would fall for; so how can she be an exception? You need real esprit to have an outlook as Samantha’s.

2. “I am not the type of woman who sits home all day waiting for a man!” 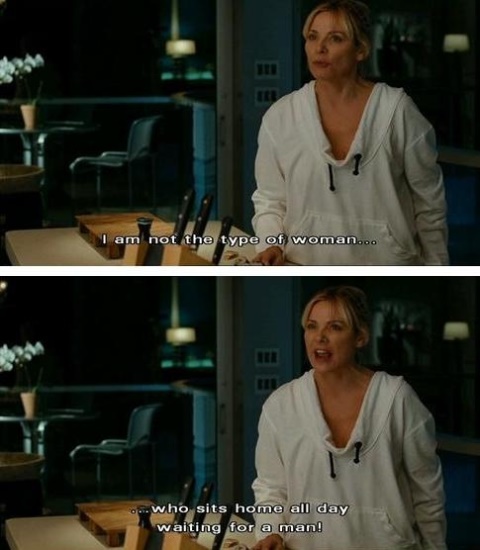 A feminist and a hard nut to crack! Samantha Jones quotes on SATC have portrayed her character as an indomitable one; someone who cannot be messed with! She’s upfront when she’s being taken for granted, she’s also a perfect (read, ferocious) guardian to her friends, letting it rip when it comes to “a-hole” boyfriends. A classic is when she calls out Mr. Big for messing with Carrie. Now that’s a friend!

3. “Listen to me! The right guy is an illusion. Start living your lives.” 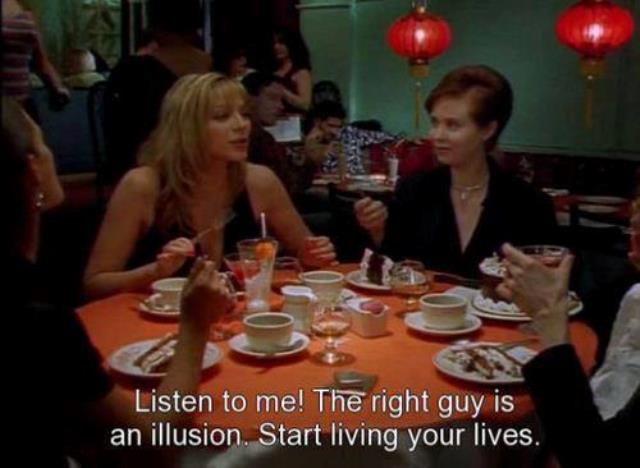 And when it comes to bursting the bubble of her doe-eyed friends looking for love in the city, Samantha is perfect to the T! Samantha was all woman as opposed to silly girls looking for a fairy tale romance with love at first sights and happily ever afters! She, however, didn’t shy away from announcing her opinions out loud about how absurd all this was! A bitter pill maybe, but one that she makes work.

4. “If I worried what every bitch in New York was saying about me, I’d never leave the house.” 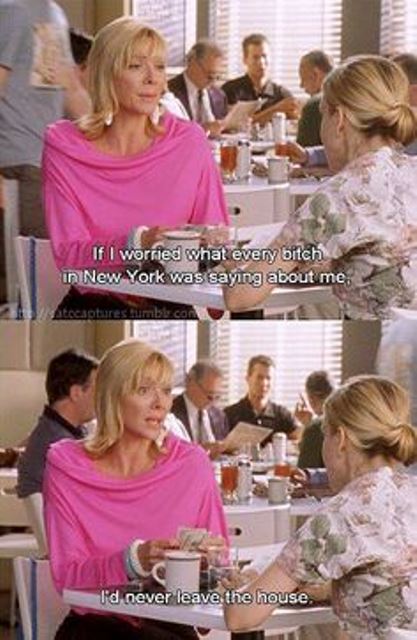 5. “I will not be judged by you or society. I will wear whatever, and blow whomever I want, as long as I can breathe and kneel.” 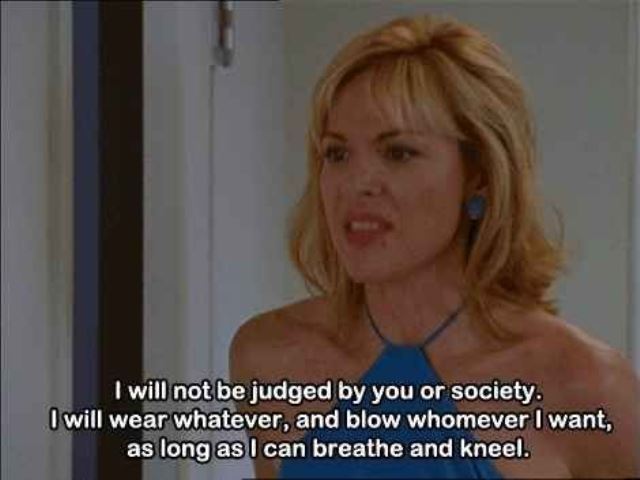 Judge Samantha, and she will eat you up alive! Well, all of us loathe being criticized by people, but ironically, we ourselves have opinions about others; then the whole idea of belittling becomes fair. Samantha is an exception to this. I am sure you have a fond memory of that episode when Carrie opens her heart to Samantha and asks her if she were tempted, even if just a little to sneer at her. The diva replies, “Not my style!”

6. “I feel the same way about being a bridesmaid as you feel about Botox. Painful and unnecessary.” 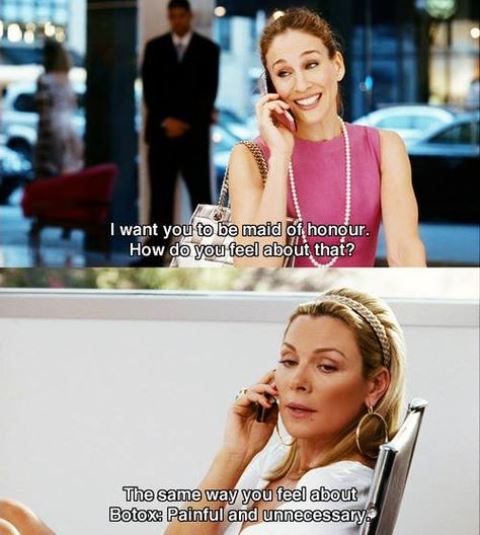 Anything over the top and sugary and Samantha could throw up. She is allergic to weddings: every single detail about them (except the sex that follows). But one doesn’t have to get married for that, right? 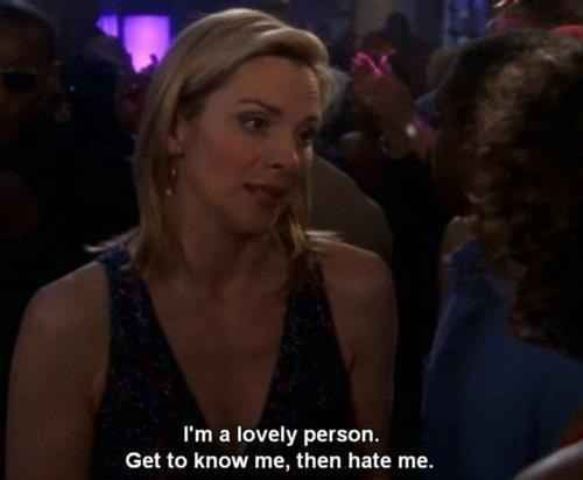 Candid, honest, and no time for bulls**t… Haters gonna hate but after this no nonsense move, how can you have anything but respect (maybe grudgingly for some) for this diva. Go Samantha! This is my favorite among all Samantha Jones quotes on SATC. If you want to be someone, you have to fit into their shoes (Carrie would have been particularly happy about this!). On a deeper level, Samantha’s quote also helps us realize you have to walk the walk and talk to talk, work really hard if you want to make it big!

9. “Oh please! There’s always a contest with an ex. It’s called ‘who will die miserable’.” 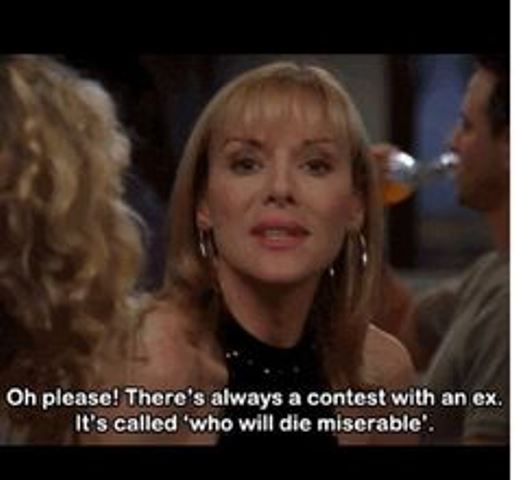 Now who could possibly explain the unwritten rules of a breakup better than this? The secret’s out! Thank you, Sammy girl for love advice at its best.

10. “I totally understand your dilemma, and from my experience honey, if he seems too good to be true, then he probably is.” 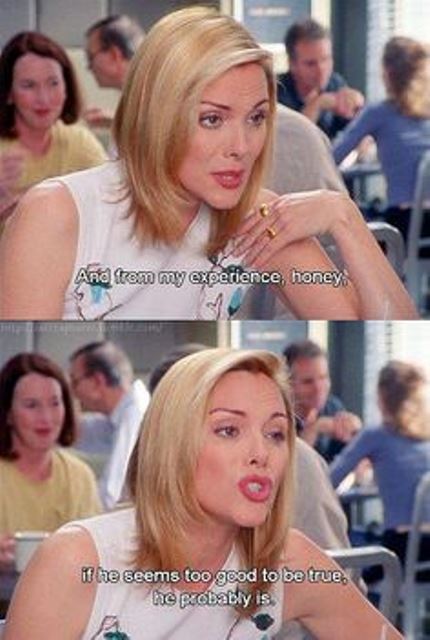 Disney needs a character like Samantha in their movies. He’s perfect: well-built, chivalrous, rich, and will love you for eternity? Samantha would rather have you believe in Santa Claus and the Tooth Fairy! Actually, based on my experiences, so would I. The good thing is, despite being a realist this diva is far from being cynical.

11. “Men cheat for the same reason that dogs lick their balls… because they can.” 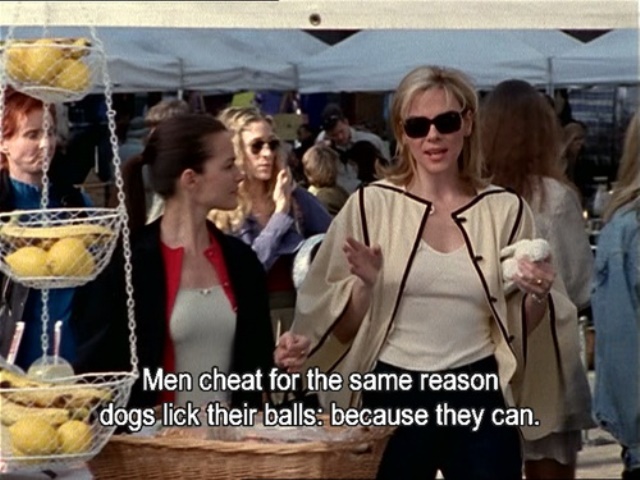 This one cracks me up every time. A truth so fundamental that even men had no idea about this before Samantha spilled the beans! Samantha has a no holds barred view on everything, and it is weird that she is always right. I mean, why the heck do men cheat? Because they can!

12. “Not that it matters, but I’m fifty-fucking-two and I will rock this dress.” 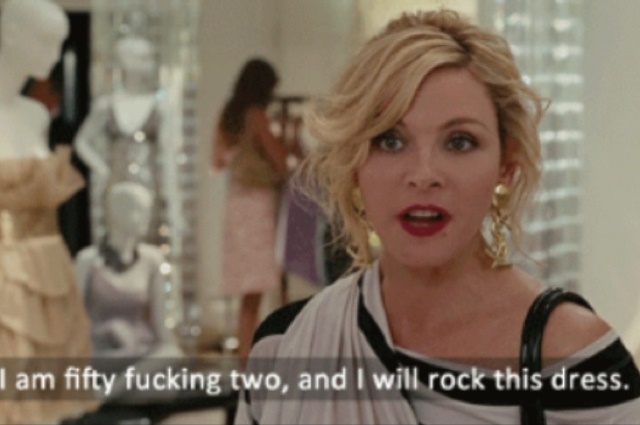 With a body like Samantha’s, she can pull off anything. Fifty-two is a long way to go, but we’ll be there some day. Do you have it in you to say this and also actually “rock the dress”? Some resolutions need to be actually worked upon soon – both with a workout and an innate sense of confidence. There, now I have a new life goal. This, in fact, reminds me of a quote by Mae West: “I’ll try anything once, twice if I like it, three times to make sure.” A woman who wants to give everything a shot when it comes to sex: a man’s fantasy! Too good to be true, don’t you think? But that’s the way Samantha is! Extending the quote to life, we live but once. So give the whole shebang at least one try! 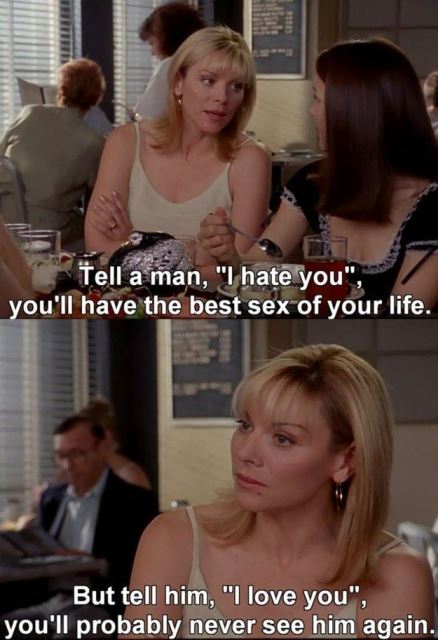 So, a guy you have the hots for has been ignoring you lately? Is he out of your league or have you given him more attention than he can handle? This dating tip is a wonder drug and has been tried and tested in most movies too! 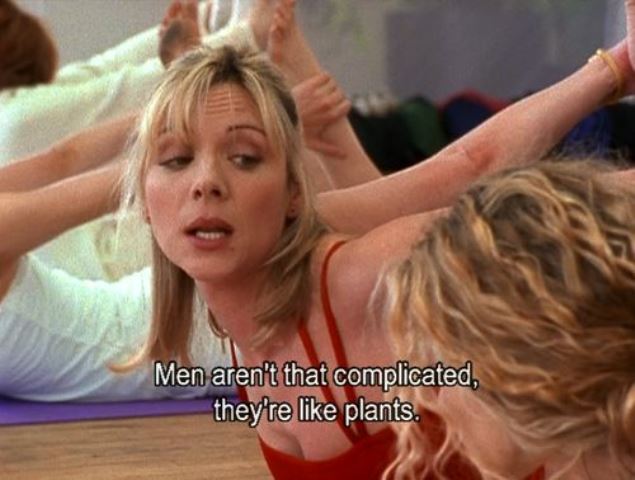 Whenever in doubt about men, trust Samantha! Her layered understanding of men and what it takes to be in a relationship, are true pearls of wisdoms that helped her friends navigate through the highs and lows of their relationships. A true friend and a love guru, if you ask me. 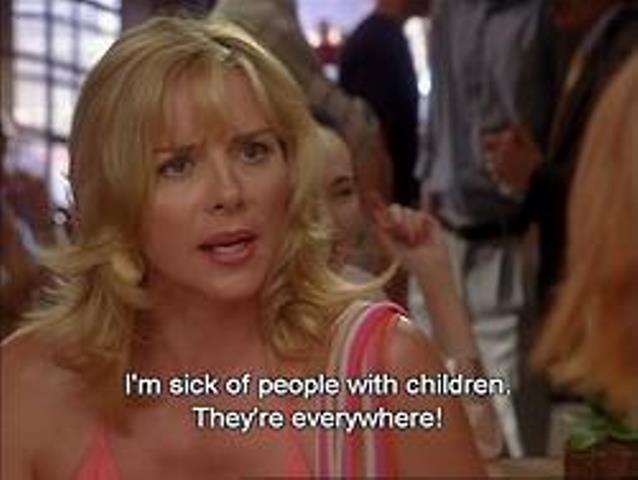 I have to admit it, I have felt this too, many times… especially when there are screaming kids in theatres and restaurants. However, when you get past her smart mouth you get to see the true friend that she is. In spite of the tough time she had adjusting to the idea that Miranda was having a child, she readily gave up a longed for hair appointment offered by an illustrious hairstylist to send Miranda instead. She also stayed back to childmind at Miranda’s. All to give her friend a much-needed break! A true diva and a true friend… Well, I also give her points for being truly Samantha when she imaginatively uses a neck massager as a vibrator while babysitting! 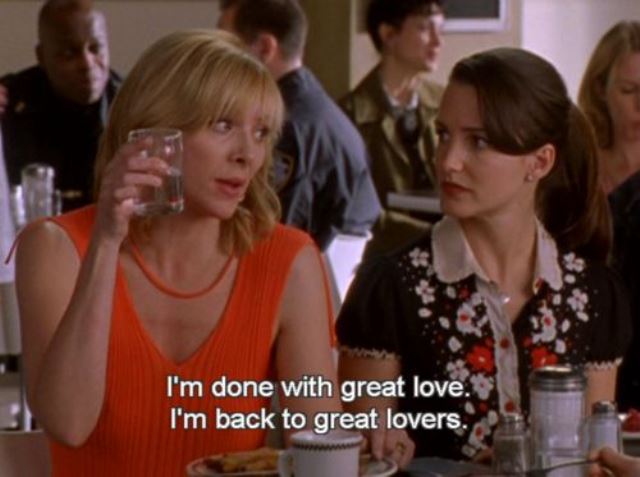 A pick on love stories which are overrated and at the same time, announcing that sex is “all you need,” SATC was lucky to have her to balance out the overly romantic Charlotte and Carrie, and put some sense into the viewers as well! 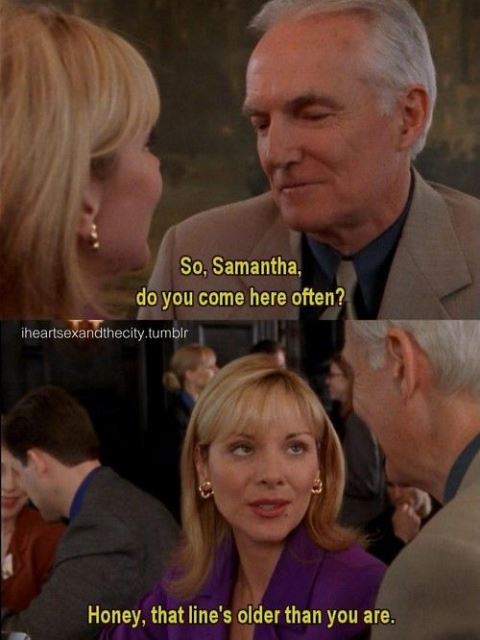 Try to act fresh with her and she will give the most sarcastic comeback ever to shoo you off. A quality all women need to inculcate to keep the pests at bay! 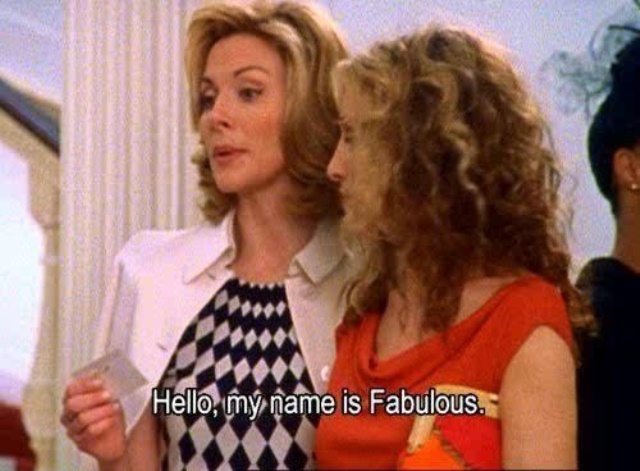 With an introduction like that, you know what a diva Sam is! A woman who started off as a saleswoman at Dairy Queen and then took Public Relations and men in New York by a storm, she can’t be anything less than fabulous. The stark reality of relationships, bluntly blurted out Samantha-style: bitter but true!

21. “We’re just as fucked up as you are. It’s like the blind leading the blind.” 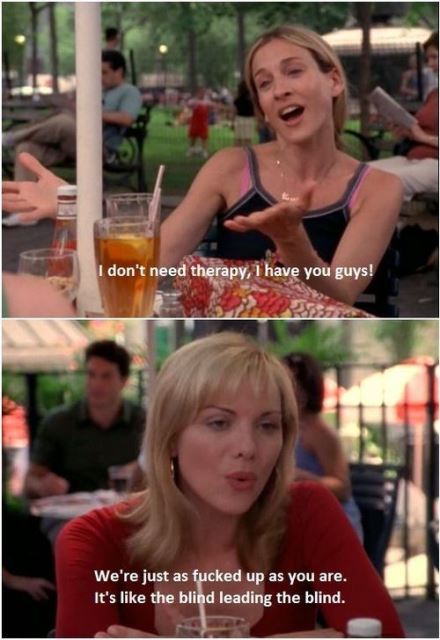 This one cracks me up every time! But no matter what she says, we know very well how loyal Samantha was to her girlfriends. Though she may not be a fan of happy endings, she makes sure that Aidan picks up the best engagement ring for Carrie! 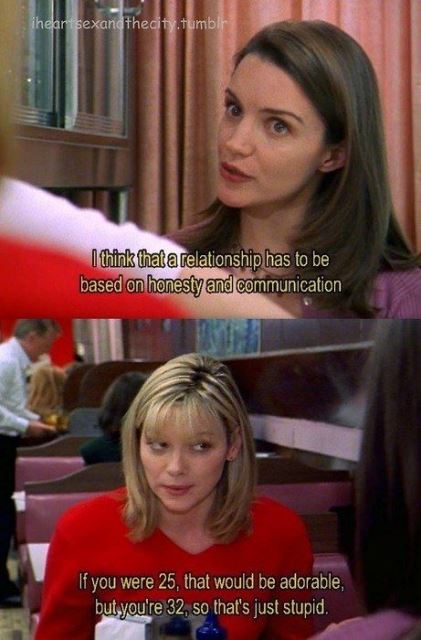 Samy and Charlotte fought quite a lot on the show, two glaring opposites that they were! Samantha didn’t let go of a single chance when she could give Charlotte a dose of reality. 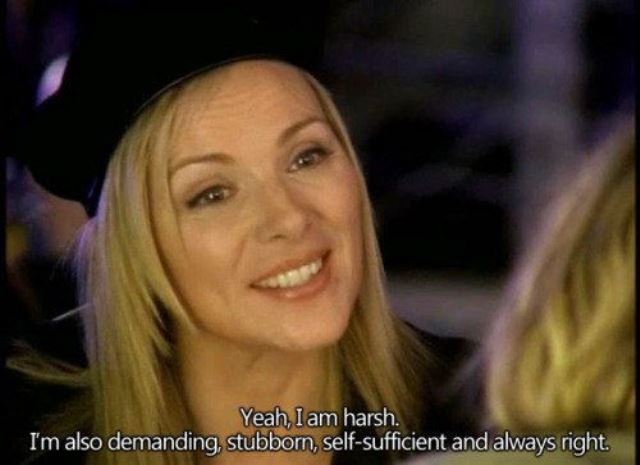 If you are never wrong, you are allowed to be a whole lot of other horrible things! “Truth is bitter but still it triumphs,” eh? 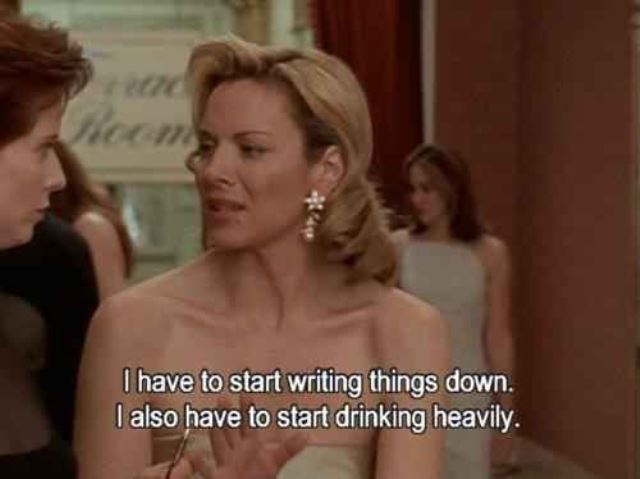 Writing your heart out and drinking quite the same way solves every effing problem. Take it from Samantha or from me! 😉

Suggested read: 15 awesome life lessons I learnt from Sex and the City

25. “As far as I’m concerned the test of a good relationship is: Are you like this? Or like this?”

A twitch of an eyebrow and a shoulder jerk, that’s all Samantha needs to explain to you the deepest secret that all of us are searching an answer to: Happiness in a relationship!

Carrie’s obsession with a “Big” wedding, Charlotte’s ambition to be a “Good Wife,” and the OCD-stricken Miranda’s take on children; Samantha balanced the tetrad with her nonchalant and casual take on dating, monogamy, and babies. Samantha, in my book, was the SHERO!

Article Name
25 Samantha Jones Quotes On SATC That Are Pure Gems
Author
Riya Roy
Description
Sex and the City without Samantha Jones? Can't even imagine, right? So check out these Samantha Jones quotes that'll help you embrace your inner diva!