Would you wear a 170 kg wedding dress?

A Wedding dress is an essential part of any wedding. Whether a bride spends a reasonable amount of money or splurges on it since it’s her big day, it needs to be spectacular. After all, how many times does a woman get married? (I’m not giving an answer because it was a rhetorical question – just FYI.)

Anyway, how would you like to wear a 380-pound wedding dress? In the metric system, that is 170 kilograms. Weighed down after reading it? Here’s the full story. 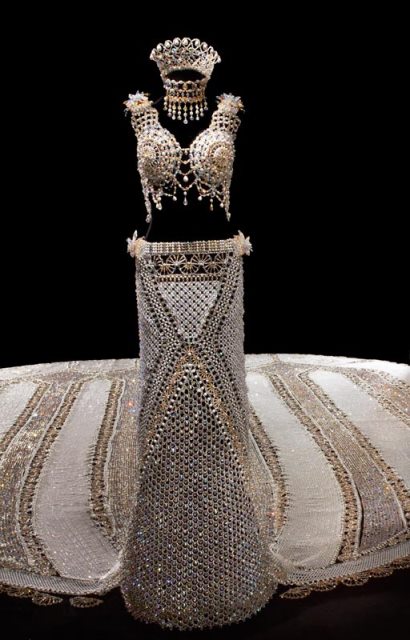 A 57-year-old woman, Gail Be, from Edina, Minnesota, has spent the last 3 years creating this masterpiece of a wedding dress, which is made entirely of beads. The train of the dress measures 20.5 feet x 18.5 feet and was constructed using 11 kilometers of beading wire. As for the beads, 500,000 glass pearls and over 400,000 crystals have been used to make the dress, with the beads collected from United States, Japan, Austria, China, and the Czech Republic. Wait, that’s not all. In total, 22 seamstresses, including Gail, have worked on it for over 20,000 hours. Phew!

The wedding dress, which is aptly named ‘Fantasy,’ has been a labor of love for Gail. She hopes that the wedding dress will end up featured in a movie and then a museum. 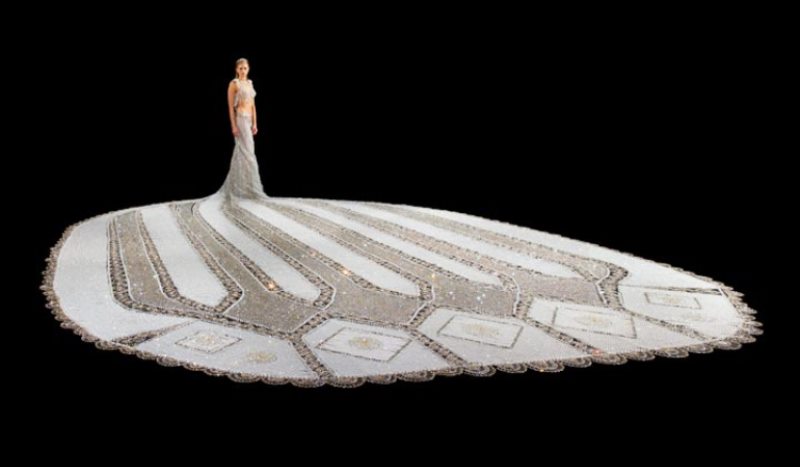 Gail, who describes herself as a “visionary artist and designer and bead sculptor,” and whose designs have been worn by the likes of Lady Gaga, has been beading for over 25 years, following a class at an American Indian memorabilia store in Minneapolis. The following year, she won a blue ribbon for her beading at the Minnesota State Fair. But unfortunately, due to a degenerative eye disease, she was declared legally blind in the early 1990s, which made her turn from bead weaving to bead collecting.

Thanks to the technological advancement in the field of medicine, Gail received a corneal transplant and Lasik surgery, which restored her vision. She’s back with a bang and has created more than 30 dresses so far.

Gail said that the idea first came to her almost serendipitously about 13 years ago. Gail had apparently created lacework that she thought she could “never make a dress big enough for.” And fast forward to 2011, when she took it out and someone told her, “That is the most beautiful piece I’ve ever seen.”

So, she set out designing the wedding dress around that piece of lacework, which ironically, is just a small fraction of the extraordinary finished dress. 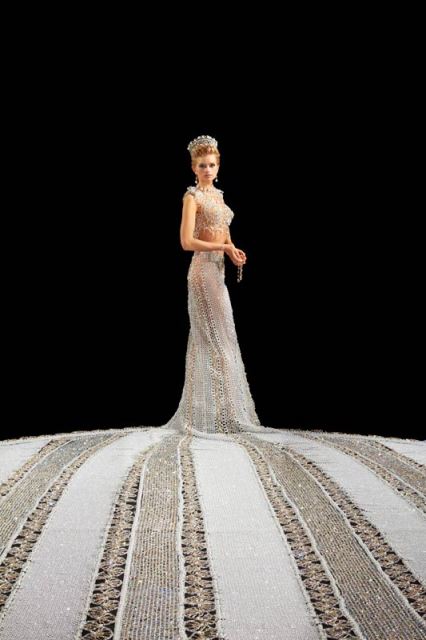 Fantasy worn by a model

“I kept going and going,” said Gail of her design. “It’s in my warehouse and when it finally got to the back I stopped and said, ‘It’s done.’ And everyone got up and clapped.”

She also added that, “I don’t read patterns. I don’t draw. I don’t know how to sew. I don’t do mathematical equations. I do this from the ground up and when the dressmakers ask where it’s going and I say, ‘How do I know? We’re only halfway through it.’”

In the hopes of getting her work of art featured in a movie, Gail has hired an agency, Look LA, to help connect her with studios, costume designers, directors, and producers. She has apparently financed the whole dress herself, and did not have an estimate of the cost. She said, “I want to work with people that have a limitless mind of what they want to do. I want to be pressed to the depth of my creativity and I don’t think I can do that anywhere but movies.”

While the dress, Fantasy, might be able to surpass the current Guinness World Record, it cannot be considered for the title. That is because a Guinness official hasn’t witnessed the approximately three-year process, from start to finish.

Gail, the proud designer said, “To just count this thing will take about two months,” when it was revealed that one of her former colleagues has been put in charge of counting the actual number of beads that have gone into the making of the dress.

Article Name
Would you wear a 170 kg wedding dress?
Author
Chaitra Ramalingegowda
Description
A wedding dress which weighs approximately about a very, very obese person. Would you care to wear it? Read on to know what we're on about.