After Lady Doritos, Here Are Other Things Women Need (NOT)

Women have been struggling with the oppressive structure of patriarchy since time immemorial. Up until the twentieth century, we didn’t even have the right to vote. Granted, we’ve come a long way since then, but there’s so much more left to accomplish. In our day to day lives too, women have to live with a myriad of issues that make life more insufferable than it already is.

Recently in an interview with Freakonomics podcast, PepsiCo CEO Indra Nooyi explained how women are failing to enjoy their Doritos to its fullest potential. Women, due to the obvious fact that they are indeed women, don’t like to crunch their chips loudly in public. They don’t lick their fingers with as much glee as their male counterparts, because, again, they’re women, and neither do they pour the little broken pieces into their mouths and savor the flavors.

Keeping this grave travesty in mind, Indra has pledged to help women across the world and contribute to the centuries-old movement of female emancipation by promising to develop a whole new range of snacks that are ‘lady-friendly’: they’re going to be crunch-free crisps (am I the only one who sees the irony of this phrase?), and will be packaged in a size that can easily fit into our purses. This is an exciting development that could change the entire ballgame of the feminist movement. If only the Suffragettes were alive to see this kind of unprecedented progress.

Suggested read: If Only: 22 Imaginary Courses That’d Make Our Lives Easier, If They Came Alive

Now that Doritos has decided to make the lives of billions of women so, so much easier; it’s time that some of our other problems are acknowledged as well, and concrete solutions are brought forward by those in power. No, I’m not talking about the wage gap. I’m not talking about the rampant sexual assault and harassment committed against women either. Don’t be such a feminazi, god. There are more important issues in the real world to deal with than just these “feminist type” things. Grow up, guys. I’m talking about actual problems that women face on a daily basis, like not having their feminine snacks fit inside their tiny feminine purses. I’m talking about problems such as, not having your makeup look natural enough for your boyfriend to be happy that you have flawless skin while also resting assured that his girlfriend is not one of those crazy women who lather themselves up with makeup all the time. These are the kind of issues women are tired of struggling against today and want justice from.

So. Here’s a list of products that we feel will finally bring women to justice and give them the freedom to live life the way they deserve to live. Leave aside your brains and common sense for this one, it’s not like us women had much of that, to begin with anyway, right?

Have you ever heard a woman fart in public? Loudly and obnoxiously the way men do? No? It’s one of those things that are a big no-no for women. Especially in public. A woman farting in public is the most unladylike thing she could possibly do. Women treat farts like a sting operation. You let it out slowly and silently, never all at once because that would risk exposure. All the while fervently praying that the stench doesn’t carry with it the remnants of last night’s spicy curry. In case it does, you can always blame it on the closest unsuspecting male victim, who’ll proudly claim ownership of the stench. And that is exactly why women need Anti-fart Underwear.

This range of underwear will be provided with a padded layer of filters that will trap the fart before it is released, filtering out the stench and releasing a flowery fragrance instead. The special padding will also have a noise canceling effect on the noise of the farts. I’d explain the science behind it, but I’m a woman and my brain cannot compute such advanced levels of scientific information, obviously.

Clearly, humanity is not ready to accept the mind-boggling truth that the color of blood is actually… wait for it… RED?! Why not go one step further in propagating the myth that period blood is, indeed, a lovely and calming shade of blue? The new range of sanitary napkins and tampons will be equipped with color changing capacities that will change the color of blood to this shade of blue as soon it comes in contact with the material. This way, we can successful prevent women too from going through the traumatic experience of finding out that during their periods their vaginas actually expel blood that is well, the color of blood. Yay for equality!

I’m actually quite surprised no one has thought of this yet. It is quite clear by now that it is always, always, the victim that is responsible in some way least for the assault they are subjected to. In the case of women, especially, the kind of clothing they wear is a key factor that determines whether they qualify to be a rape victim or not. Short skirts and dresses, sleeveless or backless tops and dresses, jeans, bikinis, trousers, saris, burqas, or anything that covers a woman’s body in a way she wants to really, can lead to her getting raped by innocent men who were caught unawares by the victim. When the state of affairs is such, it is imperative that we have an anti-rape line of clothing that will prevent these virtuous and naive men from being held arrested by lust and temptation. Men are men after all, and it is only fair that considerable research is done to ensure that the clothes women wear are made using anti-rape materials, colors and designs.

This is something that Indian women are in dire need of. The lack of sanskaar (meaning: the traditional code of ethics and virtues that Indian women must follow in order to be acceptable wives and mothers) in Indian women is an issue of national importance that needs to be fixed immediately. Scientists from NASA, in close association with the UNESCO department of Formulation of WhatsApp Forward Messages have finally come up with a cure for this national ailment. The Sanksaar Syrup restores back the sanskaar in Indian women to its optimum levels. Shove this forcefully down the throats of the women (who cares about consent anyway?) twice daily before meals, and see the change for yourself.

Now, this chip will be surgically installed in the vocal cord, following which, women can reduce the decibels of their voices to levels below the human hearing range. Us women have been known to be much more talkative than our male counterparts; we’re always gossiping, talking and laughing loudly, crying and wailing and talking way too much about our emotions because that’s what women do. Plus, I mean it’s not like our opinions are worth a dime, or even worth listening to. This all works out perfectly for everyone, doesn’t it? Moreover, this chip cancels out burps too, in case any woman accidentally dares to do such thing in public.

It’s a sad world we live in; one where grave socio-political issues are appropriated and trivialized merely for brand promotion and PR. This society is too deeply caught up in itself to actually realize the things women need. Empowerment isn’t about further segregation between men and women, even in terms of the products they use. We know what the problems are yet we choose to sit and look the other way. The things women need can never be achieved if we ourselves don’t stand up and fight for it, instead of occupying ourselves with crunch-free crisps.

To this day, women are treated as nothing more than sexual objects waiting to be owned and controlled by men. Our voices, no matter how loud, are still pushed to the background. We still have no agency over our own bodies, our sexuality, our destiny. We are raped, tortured, murdered, bought, sold, objectified, beaten, kicked down, locked up, forgotten, ignored, killed at birth, miserable in life. The things women need really are a society that is progressive enough to treat women as equals and one that treats them the way all human beings ought to be treated. All we ask for is a little bit of respect that any decent human being deserves and basic human rights. Is this really all that much to ask for?

Suggested read: Catcalls Are Not Compliments. They Are Offensive, And So MUST Stop

Feminism is important. We need to continue talking about it until the whole world realizes the seriousness of the movement and chooses to do something about it. Being a feminist who is not afraid to let her thoughts be known to the world is not a bad thing; it’s not annoying or over the top or just too much. Feminism is necessary and is what women need more than anything else in the world. Especially more than Lady Doritos. 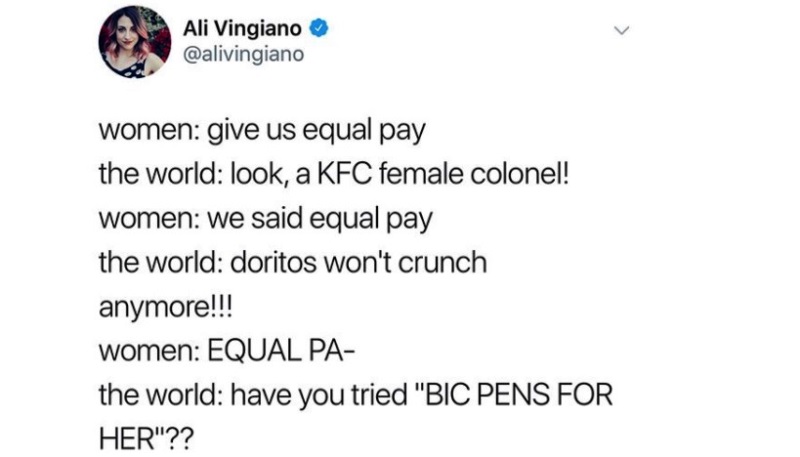 Article Name
After Lady Doritos, Here Are Other Things Women Need (NOT)
Author
Sanjukta Bose
Description
If lady Doritos is counted among the things women need, then we have some 'better' ideas to add to the list!