Am I Undateable? Stop Wondering And Check To See If You Are

Some of us just can’t get over being single even though almost every friend of ours is probably in a relationship. Forget relationships, people are even getting married and having babies, while the rest of us are stuck trying to figure out what to cook for dinner tonight. Of course, there is nothing wrong with being single and living your life to the fullest; because you know, maybe you just like it better that way.

Of course, there is nothing wrong with the whole single thing, but there are times when you wonder if there is something wrong with you. Like why can’t you just find someone to just be with? You obviously can’t sit and blame the world for it. You’ll have to come to terms with the fact that it might be because of the kind of person you are. You see, relationships require certain qualities that you need for its survival. If you don’t have these, then singledom looks like where you’re going to be at for a while. And, while we are at it, let’s answer that am I undateable? question that has been nagging you.

Here are some signs that make you undateable.

1. The internet is your best friend

Oh, yes. Netflix and chill was tailor-made for you. You’d rather just binge watch some series while you make the pizza place richer. Also, those books aren’t going to read themselves, you know? So, you’re going to make yourself some coffee and read instead of hooking up with your best friend’s brother. Or you’d rather just try your hand at cooking.

2. You get bored at social gatherings

Ah, yes. Social gatherings give you the hives. You don’t know what to say when or how to behave. You probably just sit quietly in a corner because otherwise you’ll just end up making a fool of yourself. Plus, who likes dealing with so many people and unnecessary conversations? And what about making small talk? Oh, you hate that of course.

At all. You might have met someone nice but you’re just too scared about the family meeting thing. Take it slow, will you? Neither do I want to meet your folks, nor do I want you to meet mine. Bye, then.

4. You can’t even decide what to get for lunch

Making decisions isn’t really your thing. You don’t know what to order for lunch, forget about deciding who you’ll be dating. You’d rather just decide on the food or the kind of alcohol you want to consume. Those are big decisions as it is.

5. You just have no money

You are too broke in life at all times, no matter what part of the month it is. You never have enough money to spend on things that you want, so why on earth would you date someone and splurge money on another person? You’d rather buy all that pizza. Pizza and p*rn, anyone?

You just can’t imagine sharing your space with someone else, whether it’s your bed or your room or your closet. How can you not sleep with yourself all over the bed! Like, how can people just do that cuddle thing and sleep?! Who does something like that? Are they nuts?!

7. You just can’t make a conversation

Like ever! You never know what to say. You start talking about the most random things in the world and then you just start to ramble away, probably scaring away the other person in the process. Might as well just not say anything, eh?

8. No interest in anything, whatsoever

Absolutely none! You’re not into fashion, or photography or gaming or reading or just anything. The only thing that you seem to be into is sleeping. Is that counted as a ‘thing’? Probably not.

9. Arguments are not for you

You just cannot deal with someone yelling at you or making their point. You either pretend to listen while you’re dozing off or you just turn it into a comic situation. Yeah, that won’t work well with people.

10. Friends over some love crap, any day

You’d rather be chilling with your buds than try and spend away precious time trying to hook up with someone. Why would someone want to do that? Some beer, pizza, and movie while you annoy your bestie doesn’t sound too bad.

11. Too lost in your own world

A tad bit too much, maybe? You’re either thinking about which book to buy or for how long you want to sleep for before you can catch the next episode of Game of Thrones. Who cares about the world now? Why do you even ask the am I undateable question? The answer seems to be quite clear, no?

Even if you do make it to one date, you can’t help but over-analyze everything that your date might do or say. She likes pizza, so maybe we are meant to be. Oh, he sounded a little off, maybe he doesn’t want that next date. And, these are just the saner parts of the things you think.

Maybe a past relationship left you hanging in the middle of nowhere or maybe you just can’t bring yourself to trust people anyway. You prefer hanging out with dogs because you know, dogs are so much better than human beings. Unconditional love, and all that.

All the time! You have work, gym, dinner, laundry, Netflix, sleep and just so much more to do in life. When do people find the time to go on dates, like seriously! Who plays FIFA for them? You don’t have time for this kind of thing.

Romance… um… what is that? You don’t understand the whole idea of being cheesy and mushy with someone. It makes you want to throw up. You’d rather just cuddle your pillow and sleep. It’s the same thing or rather a little better; at least the pillow won’t demand commitment. Pillows are the best!

You like your coffee only with one spoon of sugar and you hate it when they don’t have the shampoo that you use. Why can’t he ever stop talking or why does she text all day, or I want those shoes but without the buckle. It’s the same thing for you. You just have too many specific demands to find someone exactly like the image you have built up in your head. You might as well watch funny Trump videos.

If you are not the lazy kind, then you are missing out on some of the best things in life. If you’re dating someone, you’ll have to meet them, be with them, listen to them and do what not! Who has the time to do all of that when you can just lie down on your bed and do absolutely nothing? It is exactly what a good life looks like.

Suggested read: 15 best novels you must read if you’re a single woman looking for love

Well, this is just the kind of person that you are. Even making the effort to think about trying to date someone takes you plenty of time. You’re too happy and content with your own life to care about bringing in someone else and sharing it with them. Unless, you know, if they can deal with a no show very often and not expect you to talk on the phone all night while you text all day. You just can’t deal with all that pressure. You’d rather just stay home and do whatever the hell you want to.

So, the next time when you ask yourself am I undateable, make sure you remember these points. It is not as bad as you think, but if you do want to date someone, then maybe starting by getting rid a few of these habits will help. If not, then maybe you just need to find someone on the same frequency. How cool would it be to have someone not scream at you for having watched back-to-back seasons of Gotham while you forgot to have food all day? Sounds good, doesn’t it? If only you can find someone like that!

If not, then maybe you need to buck up a little. If you don’t care about being with someone, then well, happy Netflix-ing to you! 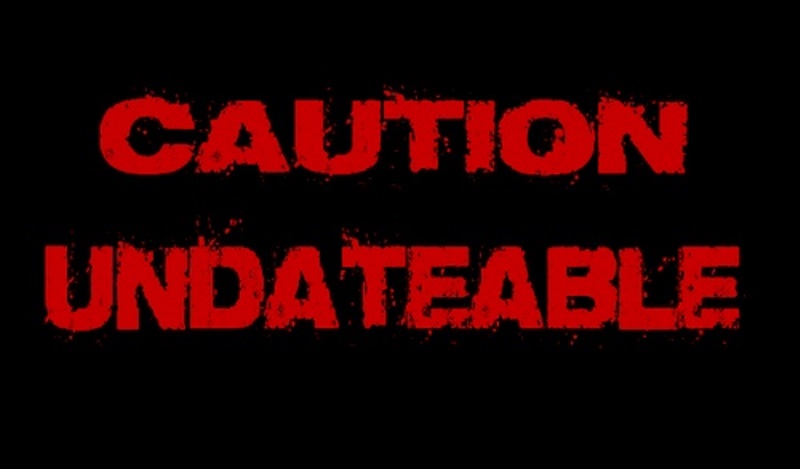 Article Name
Am I Undateable? Stop Wondering And Find Out For Sure With These 18 Signs
Author
Deepika Singhania
Description
If you've ever wondered 'am I undateable?' here's definitive proof of that.