“I Had Been Secretly Hoping This Would Turn Into A Love Poem”: Best Poems By Olena Kalytiak Davis

According to the Poetry Foundation,

“A first-generation Ukrainian American, Olena Kalytiak Davis grew up in Detroit and was educated at Wayne State University, the University of Michigan Law School, and Vermont College. Davis’s poetry collections include And Her Soul Out of Nothing (1997), selected by Rita Dove for the Brittingham Prize in Poetry, shattered sonnets, love cards, and other off and back handed importunities (2003), On the Kitchen Table From Which Everything Has Been Hastily Removed (2009), and The Poem She Didn’t Write and Other Poems (2014).”

Here are some of the best poems by Olena Kalytiak Davis.

Did not compare me to a summer’s day

Wrote not the beauty of mine eyes

But catalogued in a pretty detailed

And comprehensive way the way(s)

In which he was better than me.

“More capable of extra- and inter-

Lingual! More practiced in so many matters

And yet these mores undid but his own plea(s)(e)

And left, none-the-less, the Greater Moor of me.

my god all the days we have lived thru

not yet, this week

doesn’t count, was lost, this month

was shit, what a year, it sucked,

it flew, that decade was for

what? i raised my kids, they

grew i lost two pasts–i am

not made of them and they

each of the five

days we used to

having studied swarthmore charts and mirrors,

what vision to present as first self-sight.

self quit; put on boots and a see-through dress,

some thought it was ironic “self-object-

ification”, said they were not impressed.

some guessed that “honesty” was self’s subject,

were put off nonetheless, self-asked: to sleep

with me? who would? self flat, self one inch deep,

self-glimpsed not much in that giant mirror:

Suggested read: #NaPoWriMo If You Want To Read The Best Poems Ever Written, You Have Arrived At The Right Place!

I creep toward you. Toward you, I thistle and I climb.

I crawl, Reader, servile and cervine, through this blank

season, counting—I sleep and I sleep. I sleep,

Reader, toward you, loud as a cloud and deaf, Reader, deaf

as a leaf. Reader: Why don’t you turn

pale? and, Why don’t you tremble? Jaded, staid

Reader, You—who can read this and not even

and be convinced: Soon, Reader,

soon you will leave me, for an italian mistress:

for her dark hair, and her moon-lit

teeth. For her leopardi and her cavalcanti,

for her lips and clavicles; for what you want

Do I smile? I, too, once had a brash artless

feeder: his eye set firm on my slackening

sky. He was true! He was thief! In the celestial sense

(much-needed) relief. Reader much-slept with, and Reader I will die

without touching, You, Reader, You: mr. small-

fortune you will heave me for, for

her dark hair and her moonlit-teeth. You will love her well in-

to three-or-four cities, and then, you will slowly

sink. Reader, I will never forgive you, but not, poor

cock-sure Reader, not, for what you think. O, Reader

Dear, I understand you yourself may be hard-

pressed to bare this small and un-necessary burden

having only just recently gotten over the clean clean heart-

break of spring. And I, Reader, I am but the daughter

of a tinker. I am not above the use of bucktail spinners,

and sinkers. Thisandthese curtail me

to be brief: Reader, our sex gone

better. (And my new Reader will come to me empty-

handed, with a countenance that roses, lavenders, and cakes.

And my new Reader will be only mildly disappointed.

Forgive me, kind Reader, forgive me, I had not intended to step this quickly this far

true. R.: I had been secretly hoping this would turn into a love

“i” has not found, started, finished “i’s” morning poem,

the night before or maybe just this morning.

i lost my sex /poem!

how did it go?

i know it was called

something about my bosky acres,

‘bout all being tight and yare

did you say soothe?

today (the color of ) my sex

was lavender then yellow

i bid my lover

i bid my lover shhhhhhh

i bid my lover

i bid my lover stay

“i” notices it is almost time to pick up her children from school!

“i” realizes she has gotten nowhere, nowhere near it, much less inside it, wasted another morning, can’t fucking write a poem to save “i’s” life, oh well,

“i” pulls on her tight jeans, her big boots, her puffy parka.

“i” remote starts her car.

“i’s” car stereo also doesn’t have enough power for “i”.

“i” drives cross town listening to dylan, who has plenty of power for “i”.

“i” gets some looks from some lesser men, some in better, more powerful trucks, even though “i’s” dirty dirty-blonde hair is covered by a woolen cap.

“i” feels the power of being a single mom in a red truck.

“i” knows it is not enough power.

“i” is almost broke, but

“i” thinks “i live more in a continuous present that i enjoy”.

“i” notices the chugach mountains.

“i” remembers that yesterday the chugach mountains looked desolate and dirty and roadblocky.

“i” almost thinks “bathed in sun and snow” but stops herself.

“i” feels that “i” can maybe find, really start, really finish her sex poem tomorrow.

“i” likes the dubus thing about adultery having a morality of its own.

“i” really enjoyed “i heart huckabees”.

“i” thought sex was overrated for a long time, then not for a year and a half, and now, again.

“i” thinks there should be a new “new sexualized and radicalized poetry of the self”,

“i” knows the “single-minded frenzy of a raving madman” but,

“i” mostly keeps her head.

“i” remembers that “as long ago as 1925, boris tomashevsky, a leading russian formalist critic, observed that the “autobiographical poem” is one that mythologizes the poet’s life in accordance with the conventions of his time. it relates not what has occurred but what should have occurred, presenting an idealized image of the poet as representative of his literary school”

“i” wants to be a man like marjorie perloff, helen hennessy vendler, boris tomashevsky.

“i” thinks, on the other hand, “i mean i like in art when the artist doesn’t know what he knows in general; he only knows what he knows specifically”.

“i” thinks: “that mantel piece is clean enough or my name isn’t bob rauschenberg”.

“i” just wishes “i” could talk more smarter theory, no

“i” just wishes “i” could write more smarter poems, no

“i” wants to include the word “coruscate” in it, and, possibly, a quote from rudolf steiner.

“i” wishes she could remember abrams definition of the structure of the greater romantic lyric, but that it presents “ a determinate speaker in a particularized, and usually localized outdoor setting, whom we overhear as he carries on, in a fluent vernacular which rises easily to a more formal speech, a sustained colloquy, sometimes with himself or with the outer scene, but more frequently with a silent human auditor, present or absent.” and that “he speaker begins with a description of the landscape;’ and that “an aspect or change of aspect in the landscape evokes a varied but integral process of memory, thought anticipation, and feeling which remains closely involved with the outer scene.” and that  “in the course of this meditation the lyric speaker achieves an insight, faces up to a tragic loss, comes to a moral decision or resolves an emotional problem.” and that “often the poem rounds upon itself to end where it began, at the outer scene, but with an altered mood and deepened  understanding which is the result of the intervening meditation” evades her.

“i” wants to say “silent human auditor, are you absent or present?” but “i” knows “i” makes, has made, that move too often.

“i” reconsiders, perhaps it is like giving good head?

“i’ thinks his his he himself, but not too bitterly, then

“i” has not told her lover that “i” is not in love with him any longer, but “i” knows he knows, must know.

“i” has not told her lover that “i” had a long conversation with “i’s” x-husband on the phone last night.

“i” thinks “my sidestepping and obliquities”.

“i” thinks love is what went wrong.

“i” feels elizabeth bishop reprimanding “i”.

“i” thinks like a gentle loving firm almost slap but really just a squeeze of, not on, the hand from a, the, mother neither one of them had for very long, long enough.

‘i” thinks of jonatham letham and his dead mother and his wall of books.

“i” thinks of mark reagan and his walls and walls of books, and how his landlord, fearing collapse, made him move to the bottom floor.

“i” thinks of doug teter and his smaller, but still, wall of books.

“i” thinks jude law probably doesn’t know how to read.

“i” knows that no lover can be her “objective correlative”, still

“i” thinks “so true a lover as theagenes”.

“i” thinks “so constant a friend as pylades”.

“i” thinks “so valiant a man as orlando”.

“i ” thinks “so right a prince as xenophon’s cyrus”

“i” thinks “so excellent a man in every way as virgil’s aeneas”.

“i” notices dylan is almost done singing “to ramona”.

“i” loves “everything passes, everything changes, just do what you think you should do.”

“i” is almost there.

“i” wonders if “i’s” meditation is too long, has gotten away from “i”.

“i” thinks it should take precisely as long as the ride: 15 minutes tops; well, 30  in a snowstorm.

“i” knows it is not snowing.

“i wonders if “i” should at this point even refer to “i’s” meditation.

“i” thinks “man can embody truth but he cannot know it”.

“i” thinks “especially under stress of psychological crisis”.

“i” thinks of the diaphragm still inside her.

“i” shutters at the audacity of her sex.

“i” is exactly on time to pick up her daughter.

“i” must wait another 45 minutes to retrieve her son.

“i” will try and remember to remove it promptly when they get back to “i’s” house, i.e. home.

“i” has fucked with the facts so “you” think she’s robert lowell. (but whoever saw a girl like robert lowell?)

“i” doesn’t care if “you”, silent human auditor, present or absent, never heard of, could give a flying fuck about, robert lowell.

This is all we have on today’s post on the Best poems by Olena Kalytiak Davis. This is, however, not an exhaustive list, and if we have missed out on some of your favorites, then please feel free to add them in the comment section below. Until next time! 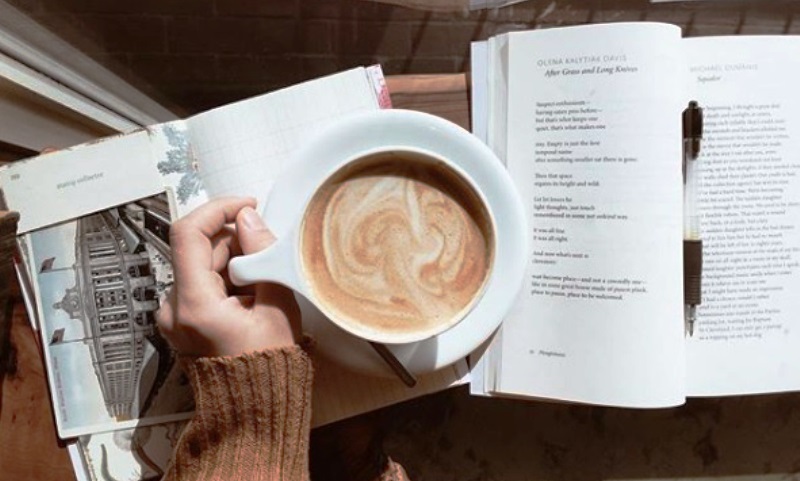 Author
Riya Roy
Description
Here are some of the best poems by Olena Kalytiak Davis.