Dear Misguided US Patriot, How Is The American Dream Coming?

“America is governed by Americans”, said Trump. “We reject the ideology of globalism, and we embrace the doctrine of patriotism.”

Is that why it took you so long to have a Black President? Did it seem unauthentic and a complete violation of the American Code, which is mostly just “white skin”? When India was invaded, continually, our “authentic” skinned members were pushed farther out to make space for the racially “pure”. I wonder if that is why the Ramayana criminalized Raavan, and went on to hail a cis white male. 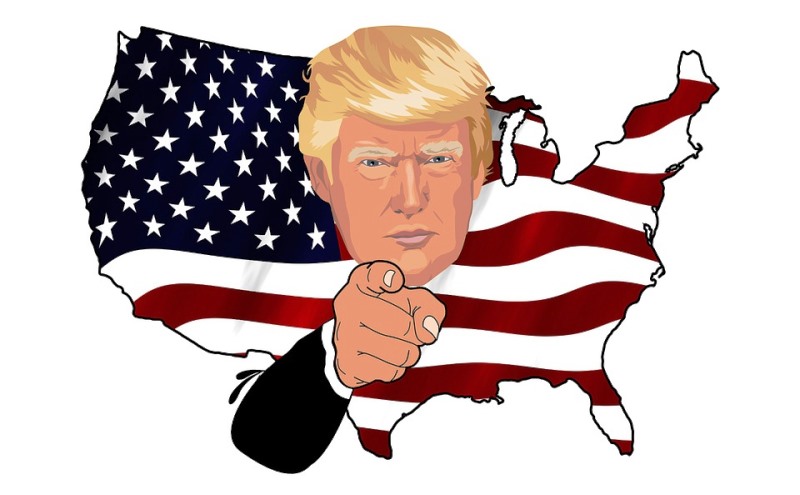 Is this why you dislike immigrants? Because we walk into your own home, take your jobs, and do it better than you? Donald Trump’s presidential run was kicked off with cruel words against Mexicans. “They are not our friend, believe me…They’re bringing drugs. They’re bringing crime. They’re rapists. And some, I assume, are good people.” It is no surprise, then, that he set his US-Mexico division wall in motion, pretty soon after gaining the President’s chair. You are living Hitler’s Utopia. Is patriotism good enough to remain human after a certain point? How long do we justify the State’s wrongs in the name of our devotion to the Fatherland?

Suggested read: The Music of Kendrick Lamar: Recording The Pulse of African-American Identity

The US immigration ban sealed the fate for the “cultural melting pot” that America was hailed to be. The “other” has been officially debarred from ever living the American dream. Families were separated, businesses were ruined, and futures corrupted. All in the name of safeguarding the image and purity of the greatest nation in the whole world. ‘Punish a Muslim’ Day, to be held on April the 3rd, was advertised across the U.S and UK. It started with anonymous letters being sent to Muslim households in the UK, “with a list of points that would be awarded for acts of violence against Muslims: 10 points for verbal abuse, 100 points to beat up a Muslim, 1000 for burning or bombing a mosque, 2500 points for nuking Mecca and so on” (source). Hasan Minhaj did a comic episode on it, at Trevor Noah’s ‘The Daily Show’, where he expressed relief for the new invention. He said, “It’s one day. That’s 364 days less than normal”, which calls for celebration. How do you live in peace while other cower in terror?

Blind patriotism has caused you to relate specifically with the privileged, thereby discounting the struggles of your neighbors. It perpetuates a dangerous form of racial hatred that seeks of destroying the possibility of co-existence with anybody who does not look like you. In an essay titled, ‘What Does It Mean To Be Black In America?’, Michelle Smith asked her colored friends for their experiences. “Being black in America is not being guaranteed clean water. Being black in America is being killed while attending Bible study by a self-proclaimed white supremacist who, even after being convicted, is defended by some media sources. Being black in America is being compared to the very hate group responsible for lynchings of blacks for simply protesting a penal system designed to disproportionately affect and enslave people of color. Being black in America and being conscious of institutionalized racism is ‘to be in a rage almost all the time,’ as argued by author James Baldwin.”

Suggested read: Why Black Lives Matter: A Black Woman Requests Her People To NOT Get Tired Already!

To speak of recent political developments, the Kavanaugh scandal hardly surprises me. For a man of failed business enterprises, who once publicly stated that he likes to “grab (women) by the p*ssy”, it hardly seems out of place to support a sexual offender. It surprises me, however, that a political system can be so devoid of conscience that the Senate Judiciary Committee still grants his position for the Supreme Court. For ages, Donald Trump has declared any Democratic opposition to Kavanaugh as a crude “con-job”. What empirical data, or statistics he has in order to support this claim, will forever be unknown. For once in America, if a political candidate’s mail is hacked, then we probably won’t find more than Burger King coupons.

An overt, and biased love for the abstract concept of a “nation” contributes heavily towards war. In the book ‘War, Its Causes and Corelates’, authors Martin A. Nettleship, Dale Givens, and Walter de Gruyter, talk about a connection between strong feelings of patriotism in a population, and the higher chances of war that it inevitably leads to. This essay states, “A January 2014 Congressional Research Service report titled, ‘Instances of Use of United States Armed Forces Abroad’, lists cases of US Armed Forces being deployed ‘in situations of military conflict or potential conflict.’ The report shows 25 such deployments since 2009. Polls find that Americans are generally very patriotic (second only to citizens of Venezuela).”

The United States and its not-so-covert strategies of state-sponsored terrorism is quite notorious. In the Iran-Contra debacle, the United States supported the Contra’s action against the Sandinista government. They assisted them with food, weapons, and rigorous training, with the CIA manning the entire operation. The purpose was to elicit a strong response from the Sandinista government, that would give USA the grounds to legitimately push farther, with more brutal means. In fact, the steady flow of ammunition to Pakistan, and the rise of the Al Qaeda, can be traced to an American influence. Why does the USA need to feel so empowered, so great, at the cost of others? When you reject globalization in America, you also support that the fear that others will do to you what this country has continued to do to others.

The US infatuation with firearms extends far beyond the boundaries of the state’s actions alone. Every day, 96 Americans are killed due to gun violence, and hundreds more are left injured. Even children are not spared, with the insurgence of gun violence into the protective space of the school. A 2015 article hosted by Independent, UK, states, “The most prominent voice of the pro-gun lobby is the National Rifle Association (NRA). Known for its unofficial slogan ‘guns don’t kill people, people kill people’, the group champions itself as a “major political force”, with almost five million members pouring money into its Political Victory Fund to help elect pro-gun politicians.” Obama had declared that there are enough guns for every man, woman, and child, living in the United States. The average American feels the dire need to arm themselves, mostly because they do not trust their neighbors. I wonder who or what caused that phenomenon.

My greatest issue with unchecked and indulgent patriotism lies in the celebrated occasion of Thanksgiving. The Holiday that is widely celebrated, is based on the emotion of “giving thanks” for what we are grateful for, especially for this land. However, there is a tiny research error in this philosophy. When Christopher Columbus discovered this “empty plot of land”, it was not fairly “empty”. The natives were the original occupants of the space, and once that was discovered, mass genocides were conducted to wipe them off. The doctrine of “terra nulis” allows a state to occupy unclaimed land. However, the Red Indians, and Native Americans, were legitimate claimants of the space, which was usurped by the white colonizer.

Keeping this in mind, Thanksgiving is, in fact, the celebration of the colonial conquest. “We are grateful for the land”, they say, but conveniently, forget to add, “that was usurped from its rightful occupants, who, in turn, were poached off in order to ensure complete dominance by the colonizer.” Warfare was taken to the level of infection and disease. “Plague blankets” were passed onto the natives, in good will, infecting the majority of the populace, and exterminating them like you would to house insects. Year after year, Americans have gathered around the table and given thanks for this. Is patriotism good enough for you to forget humanity entirely?

How naïve does one have to be in order to strongly believe that anything in this world belongs to them? We take nothing into the afterlife, so why do we care so much about walls during our lifetime? How does it matter if we have different skin colors, dialects, appearances, or worldviews? For a world that finds aliens uber-interesting, we are shamefully intolerant of people who look unlike our forefathers.

It is high time that the average American understands the fallacies of an overindulgent and misplaced sense of nationalism. This is what brought Donald Trump to the center stage, and keeps him secure in that undeserved chair, a man who has maintained impossible silence on, and an unwavering passivity to, a neo-Nazi, white supremacist group, the Klu Klutz Klan, or ‘the triple K’.

Maybe we should not invest so much power into bigots. Maybe a person with infinitesimal respect for women, race, and just about any aspect of the country under his governance, is not the best Presidential candidate. And even if one such individual does rise to power, the countrymen do not necessarily lose their voices of protest, or the ability to stand by what is right, not just for themselves, but for everybody else. Is patriotism good enough for you to bid farewell to a working conscience?

Article Name
Is Patriotism Good Enough For You To Bid Farewell To A Working Conscience?
Author
Meghalee Mitra
Description
Is patriotism good enough to remain human after a certain point? How long do we justify the State’s wrongs in the name of our devotion to our country?