There are tons of magazines – both online and in print – that dole out dating advice for men and women in boat loads. These include dos and don’ts, how to behave, what to talk, how to end a date, where to meet, how to dress and so on and so forth. While there’s nothing wrong with such tips per se, the problem arises when people, men especially, are given tips on how to change a woman’s mind. In essence, turning a woman’s NO into a YES.

That’s right. This gem of a piece of dating advice was given in a column in the magazine, Men’s Fitness. The article, titled “How to Turn a ‘No’ into a ‘Yes’,” has naturally drawn massive outrage on Twitter, where man readers pointed out to the coercive nature of the ‘advice’ in the column. It basically advises men to ignore and/or violate women’s consent, whether it’s on a date, in a relationship, or in bed.

Following the pattern generally followed in their magazine, the article was structured as a slideshow, that included specific rules for different scenarios with apt headings like ‘At the bar,’ ‘On a date,’ ‘In a relationship,’ and ‘In bed.’

The article has been written by Nick Savoy, a pick-up artist, who is known as ‘the most sought after dating and attraction expert in the field.’ Obviously, once readers on Twitter pointed out the shady guidelines provided by the article, the publication first removed a part of the article, notably the ‘In bed’ section, citing that it ‘had not met the editorial standards.’ A bit later, the whole article was taken down.

Lol this sounds like a myth they make up in Toxic Masculinity School pic.twitter.com/6ZbTEDO9gU

However, unfortunately for the publication, much of the ‘guidelines’ in the column have been preserved on Twitter through screenshots, despite being pulled down from the site.

Such articles, especially when written in a major men’s magazine, that has scores of readers, perpetuates the fact that when a woman says NO, it’s not exactly a NO; that it could also be a YES cloaked as a NO; that she doesn’t know what she wants, let me show it to her; that she’s being a tease, she’ll like it once I start with it. In short, such articles just illustrate the pervasiveness of the horrifying rape culture that seems to dominate anything and everything, and the abject lack of understanding of consent.

Apart from the removed dubious ‘in bed’ section, the ‘At the bar’ part of the article, the writer seems to be encouraging men to harass women who rejected their advance. It’s like asking the man to try and try till they succeed, only this is called harassment in real life! And the words used to describe this strategy – plow ahead anyway – seems like a siren call to ignore the woman’s protests of not being interested in interacting with the man. That phrase alone caused the Twitterati some serious anger. 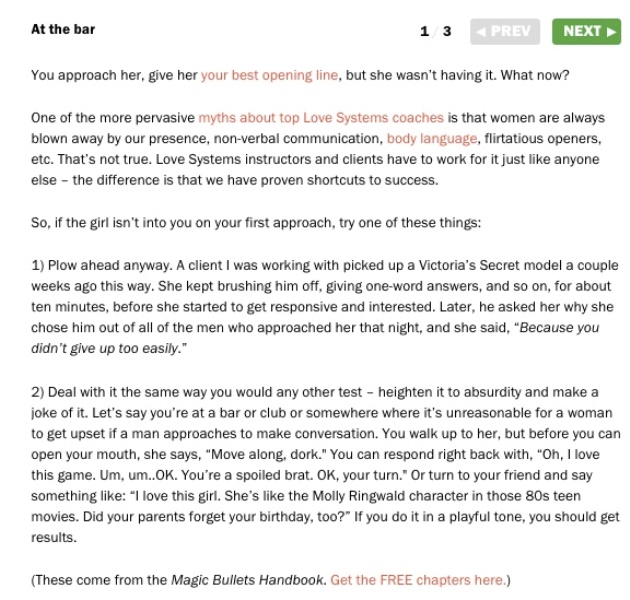 Even reading parts of the article with questionable dating advice, you can make out that the writer doesn’t value what a woman wants, instead, going off on what a man should do to turn her NO into a YES, at all costs. What he fails to understand is that a woman has every right to reject or accept a man’s advances. It is HER CHOICE; nobody else’s. In the same vein, she deserves to be left alone if her answer is a clear NO.

To emphasize his point, he writes, in bold:

“Let’s say you’re at a bar or club or somewhere where it’s unreasonable for a woman get upset if a man approaches her to make conversation.”

Huh. This line seems to assume that if a woman is in certain places, say, like a bar, she has NO right to say no when a man approaches her. It is also similar to the thought process that says that a woman is clearly ‘asking for it,’ if she’s wearing a revealing outfit, or that her consent is implied if she’s drunk and kissed you once.

Consent, in any form or shape, isn’t addressed in the entire article. At all.

Worry not, though. A couple of Twitter users made some major minor to the piece, that are pretty spot on.

@aurabogado hey @MensFitness I fixed it for you, it seems you don’t understand what “no” means! pic.twitter.com/VeT1aG1nDY

While the stats show an alarming increase in sexual violence incidents against women,  we don’t need to be teaching men how to turn a NO into a YES. Instead, they need to be taught and respect that a YES means a YES, and a NO means a clear, undoubted NO. 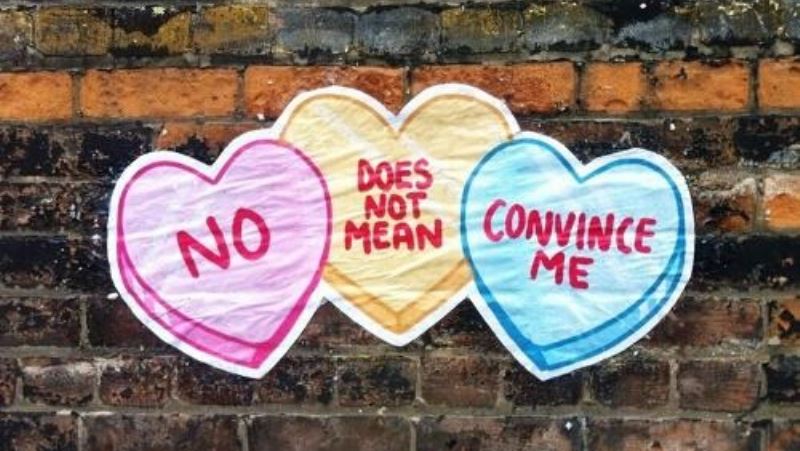