6th September 2018 will be forever celebrated as the day India moved on to the right side of history and stood up for the rights and dignity of a community that had suffered at the hands of the government and the entire society since the days of colonialism. The scraping of Section 377 arrived at a time when LGBTQ activism is at its peak in India, but so is the violence and discrimination against the community. The historical verdict is being hailed as a much needed step forward in the fight to end all sorts of discrimination based on one’s sexual orientation. However, this victory is the result of nearly three decades of continuous hard work and dedicated activism by individuals and organizations who pledged their entire lives to this cause. Most of it, unfortunately, remains unknown and finds no place in the annals of India’s modern history. Lack of knowledge and awareness is always cited as a key factor that contributes to rampant homophobia among the masses, allows powerful institutions to get away with distortion of facts and information that further fuels the problem.

Suggested read: #PrideMonth A Short History Of The LGBTQ+ Community

Even before Naz Foundation and the Lawyers Collective filed a PIL for the repeal of Section 377 in 2001, there were organizations and activists who had been fighting for the gay rights movement in India. In 1977, Shakuntala Devi published “The World of Homosexuals” which is said to be the first study of homosexuality in India, against the backdrop of the Emergency years. Here, she stressed that the need of the hour was to acknowledge the existence of and create inclusive spaces for the homosexual population of the country. In 1981, the All India Hijra Conference was held in Agra and saw participation from nearly 50,000 members of the community. In 1999, the first ever pride parade in India took place in Calcutta on July 2nd. It was called the Friendship Walk and hardly had fifteen participants.

The first organized public protest of the gay rights movement in India was held on 11th August, 1992 outside the Police Headquarters at New Delhi. It was organized by the AIDS Bhedbhav Virodhi Andolan (or the AIDS Anti Discrimination Movement) and was attended by over 500 enthusiastic individuals, including civil liberties and democratic rights groups. The protest was organized a day after 18 people were arrested from the Central Park, Connaught Place on charges that they were allegedly about to engage in homosexual acts. When members of ABVA approached police officers to enquire about the arrest, they were told that they had received complaints from residents in the neighboring areas regarding the “menace of homosexuals” in the park during the evening hours. Harassment of this kind continues to be a common practice in different parts of India even today. In June this year, a gay man and his friend were beaten up by police in Delhi and subsequently arrested for hugging a trans woman. However, with the partial striking- down of Section 377, members of the community at least have legal protection now that can help them seek redress.

The ABVA started out in 1988-1989 as a non-profit organization that worked to end all forms of discrimination against HIV/AIDS in India. During its initial days, it comprised an eclectic mix of members that included a leprosy patient, a nun, a closeted gay person, social workers, doctors, lawyers, non-formal education workers, women’s groups’ members and even a pavement dweller. In 1989, ABVA played a significant role in stalling the AIDS Prevention Bill, 1989 from passing, through petitions in the Parliament, public meetings and protest. Had this draconian bill been passed, then high risk groups would be forcibly tested for HIV by the government and those with positive results would be forced into quarantine. This law would have massively violated the civil and democratic liberties of many.

The organization is credited with publishing the first citizen’s report on the state of homosexuals in India titled “Less Than Gay”. The report was prepared by seven ABVA members, viz Arun Bhandari, Dr. J.P. Jain, Jagdish Bhardwaje, Lalitha S.A., Dr. P.S. Sahni, Shalini S.C.N. and Siddharth Gautam. The report also carried the Charter of Demands- the LGBTQ Manifesto that, for the first time in India, articulated the demand for the repeal of Section 377 along with the relevant sections of the Army, Navy and Air Force Act, 1950 that criminalized same- sex sexual activities. It demanded for the recognition of right to privacy as a fundamental right for all citizens of the country. The manifesto also stressed on the need for equal civil rights and legal protections of the LGBTQ community and also demanded the establishment of a government commission to document human rights violations of queer individuals in India.

In 1994, ABVA filed the first Public Interest Litigation (PIL) in Delhi High Court challenging the constitutional validity of Section 377- this was the first legal protest against the oppression of the LGBTQ community in India by government institutions and set the ball rolling for the gay rights movement in India. No queer person volunteered to be a part of the case in spite of best efforts made by the organization. Back then; even persons belonging to the LGBTQ community were reluctant to openly support and fight for the community for fear of public backlash and repercussions. Remember, that in the 1990s, it was much harder to be queer in India than it is today. The petition was dismissed in 2001, but it sowed the seeds for a fight that went on for years until it finally saw the glimmering light of success. The PIL was actually filed due to a public controversy wherein ABVA activists were refused permission by authorities of Tihar Jail when they wanted to distribute condoms to the prisoners. Kiran Bedi, the then Inspector General of Prisons, refused permission on the grounds that allowing distribution of condoms would mean admitting the existence of homosexual relations in Tihar and that it would encourage the practice further.

Alongside ABVA, Humsafar Trust was another NGO that pioneered the cause of LGBT rights in India. Its initial focus was on providing HIV/AIDS health services to gay men, but soon it expanded to provide guidance, checkups, counseling and outreach for the entire LGBTQ community. The founder of this organization, Ashok Row Kavi, is said to have written the first “coming out” story in India that was published in 1986 in Savvy magazine. At that time, Kavi did not realize the impact his story would have on his own life and on the lives of other people. In an interview later on, Kavi admitted he had no idea that his story would cause such controversy. “When you come out in India, [your] gay identity becomes your primary identity… All the other identities- being a good journalist, for instance- become backups. When I came out in 1984, I didn’t realize it would create such a ruckus, but I nearly lost my job. My boss stood by me, though. Fortunately, I had come out to him before I had accepted the job,” Kavi had stated.

2001 saw certain landmark events in the struggle for LGBTQ rights in India. Alongside the PIL filed by the Naz Foundation and Lawyers Collective, queer folk in Mumbai staged a silent protest outside the famous Flora Fountain, ushering in a new culture of protest for the movement. The protest was in reaction to the arrests made in July 2001 by Lucknow Police. They arrested a group of men from a local park on the grounds of suspected homosexuality. One of them was a worker with an NGO called the Bharosa Trust; the police raided their office and confiscated safe- sex aids, like condoms, lubricants, instructional videos and dildos. This news was reported with much sensationalism by the mainstream media, since journalism around gay rights then was severely uninformed and had a tendency for sensationalizing incidents surrounding this issue.

The long struggle of LGBTQ activism in India is one that is peppered with both victories and losses. In 1987, the marriage of Leela and Urmila, two policewomen from Madhya Pradesh, became the first known case of same sex marriage in India. The two of them eventually lost their jobs. In 2002, Kali became the first hijra person to stand for elections in Bihar and was elected a ward councilor. In 2004, Pushkin Chandra and his partner Kuldeep Singh were both murdered in cold blood. This incident brought to light the homophobic violence in the country and it was only in 2010 that the murderers were awarded life sentences. In 2010, the Delhi High Court passed a landmark judgment granting equal rights to “sexual minorities”. The Supreme Court in 2013 overturned this judgment, stating that matters pertaining to the repealing or amending of Section 377 should be left to the Parliament, not the judiciary. In January 2018, the Supreme Court agreed to hear a petition to revisit the 2013 Naz Foundation judgment.

What this lesson in history teaches us is that the fight isn’t really over. There is still so much work left to be done. Several lawyers, activists, NGOs and individuals spent their lives struggling so that we could live in a better world; and our duty towards them is to create more accepting and safe spaces for those who come after us. We must educate ourselves and those around us, spread awareness against homophobia, hold institutions of power accountable for their policies and actions, support and protect those who need it the most, and promise to not get complacent in this recent victory. 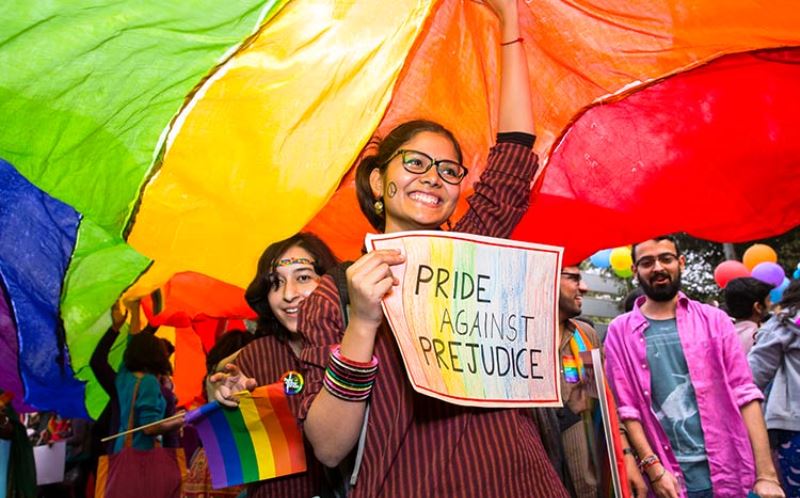