#NaPoWriMo Best Poems By Ronald Koertge That Celebrate The Ordinary

In the second half of April, we will be celebrating the poetry of modern poets for #NaPoWriMo.

Today, we have compiled a list of 8 of the best poems by Ronald Koertge. This, however, isn’t an exclusive list, but just a list of our favorites.

They were never handsome and often came
with a hormone imbalance manifested by corpulence,
a yodel of a voice or ears big as kidneys.

But each was brave. More than once a sidekick
has thrown himself in front of our hero in order
to receive the bullet or blow meant for that
perfect face and body.

Thankfully, heroes never die in movies and leave
the sidekick alone. He would not stand for it.
Gabby or Pat, Pancho or Andy remind us of a part
of ourselves,

the dependent part that can never grow up,
the part that is painfully eager to please,
always wants a hug and never gets enough.

Who could sit in a darkened theatre, listen
to the organ music and watch the best
of ourselves lowered into the ground while
the rest stood up there, tears pouring off
that enormous nose.

After all the Shakespeare, the book
of poems they type is the saddest
in history.

But before they can finish it,
they have to wait for that Someone
who is always

looking to look away. Only then
can they strike the million
keys that spell

humiliation and grief, which are
the great subjects of Monkey
Literature

and not, as some people still
believe, the banana
and the tire.

When the Lexus hit that pigeon, he lay there
beating his one good wing against the curb
like he was trying to put out a fire.
My wife asked me to do something, so I
turned his head clockwise until I heard
a click. Then darkness poured out
of the small safe of his body.
That is when I realized I used to
merely love my wife.
Now I would kill for her.

Give up sitting dutifully at your desk. Leave
your house or apartment. Go out into the world.

It’s all right to carry a notebook but a cheap
one is best, with pages the color of weak tea
and on the front a kitten or a space ship.

Avoid any enclosed space where more than
three people are wearing turtlenecks. Beware
any snow-covered chalet with deer tracks
across the muffled tennis courts.

Not surprisingly, libraries are a good place to write.
And the perfect place in a library is near an aisle
where a child a year or two old is playing as his
mother browses the ranks of the dead.

Often he will pull books from the bottom shelf.
The title, the author’s name, the brooding photo
on the flap mean nothing. Red book on black, gray
book on brown, he builds a tower. And the higher
it gets, the wider he grins.

You who asked for advice, listen: When the tower
falls, be like that child. Laugh so loud everybody
in the world frowns and says, “Shhhh.”

goes by at 1:00 a.m. two nights of the week. I can
hear the feather whoosh of his machine and see
one red light.

I believe that the streetsweeper lives alone,
sleeping
through the cold days, waking clear-eyed and deft
as the sun goes down.

I believe that he works steadily without a portable
radio or a reading light or a nap. When he pauses
it is to stare placidly into
the potent night.

For reasons too numerous to mention, I think
about the
streetsweeper often and about the singular,
provident
cadence of his life.

In the airport bar, I tell my mother not to worry.
No one ever tripped and fell into the San Andreas
Fault. But as she dabs at her dry eyes, I remember
those old movies where the earth does open.

There’s always one blonde entomologist, four
deceitful explorers, and a pilot who’s good-looking
but not smart enough to take off his leather jacket
in the jungle.

Still, he and Dr. Cutie Bug are the only ones
who survive the spectacular quake because
they spent their time making plans to go back
to the Mid-West and live near his parents

while the others wanted to steal the gold and ivory
then move to Los Angeles where they would rarely
call their mothers and almost never fly home
and when they did for only a few days at a time.

Walking toward the library, I pass three children
staring down at a dead crow and daring each other
to poke it with a stick.
I stop, too, because I know a little about crows –
how, for instance, they are different from ravens.
I could tell these well-dressed children that:
ravens are black a with purple tint while crows
are denied that royal hue. A crow’s tale is squared-off
like the crew-cut on the boy at Menchie’s who hands
them the expensive frozen yogurt
while a raven’s tale is triangular, a shape discovered
by the Persians and beloved by the 17th century
mathematician Blaise Pascal. Furthermore, ravens
love solitude and prefer remote hills and woods
while a crow will perch on a stop sign and brag
about it endlessly.
But that isn’t what they are concerned about.
They want to know about Death. And for that
I would have to fetch the skull from my desktop
and ask the sun to hide its face behind a dark,
galleon-shaped cloud and then –
Oh, wait. They’re offering me the stick. All
they really want to know is will I poke the corpse.
Of course. And when I do and it moves, they
run away shrieking and delighted. More alive,
if possible, than before.

When I come in, my mechanic is eating
lunch. He doesn’t look over the top
of his newspaper.
I glance around, hoping that Miss July
with her sassy fife will distract me,
but his calendars
feature only a vernal wrench, saucy
timing belt, naked carburetor:
things that might make a robot humid.
Sitting across from his headlines, I feel
like the mechanic’s wife: virtues ignored,
faults magnified, taken for granted . . .
It’s all I can do to not clutch
the lapels of my robe and run into
the bathroom weeping.
Finally he listens. Intently. Leaning closer,
one hand on my trembling manifold.

Suggested read: 7 Best Poems By William Blake That Only Gained Popularity After His Death

This is all we have on today’s post on the Best Poems by Ronald Koertge. This is, however, not an exhaustive list, and if we have missed out on some of your favorites, then please feel free to add them in the comment section below. 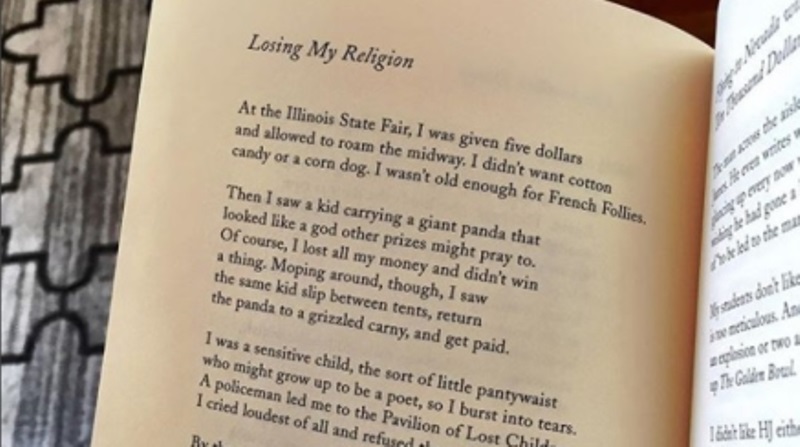 Article Name
#NaPoWriMo Best Poems By Ronald Koertge That Celebrate The Ordinary
Author
Riya Roy
Description
Today, we have compiled a list of 8 of the best poems by Ronald Koertge. This, however, isn’t an exclusive list, but just a list of our favorites.