Vivaah Of The Year: The Shahid Kapoor – Mira Rajput Wedding!

Amidst a zillion speculations about the Shahid Kapoor – Mira Rajput wedding, the ‘Vivaah’ of the year has come to happen and how! All former reports about the wedding seemed to have been untrue and seems like the hush-hush couple succeeded in keeping the details of the most important day of their lives a well-guarded secret from the prying eyes of the paparazzi and public. 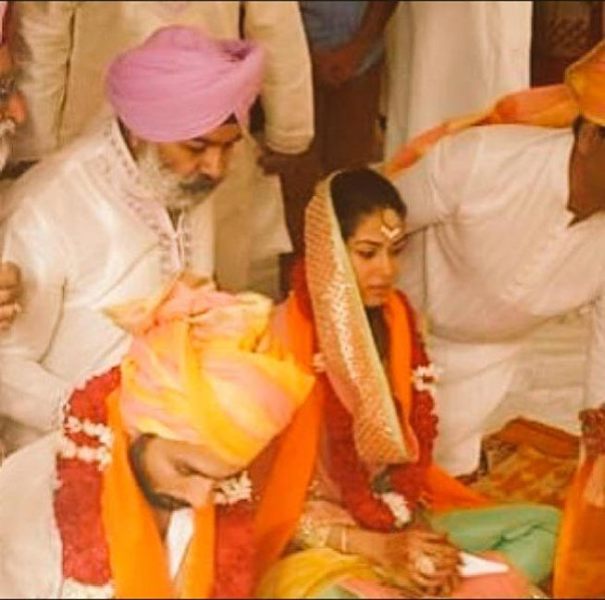 But now that Mira Rajput is officially Mrs. Shahid Kapoor, a title coveted by a million girls nation-wide, there is no doubt about any of the details. And therefore, as promised, we bring to you the definitive details of the Shahid-Mira wedding. 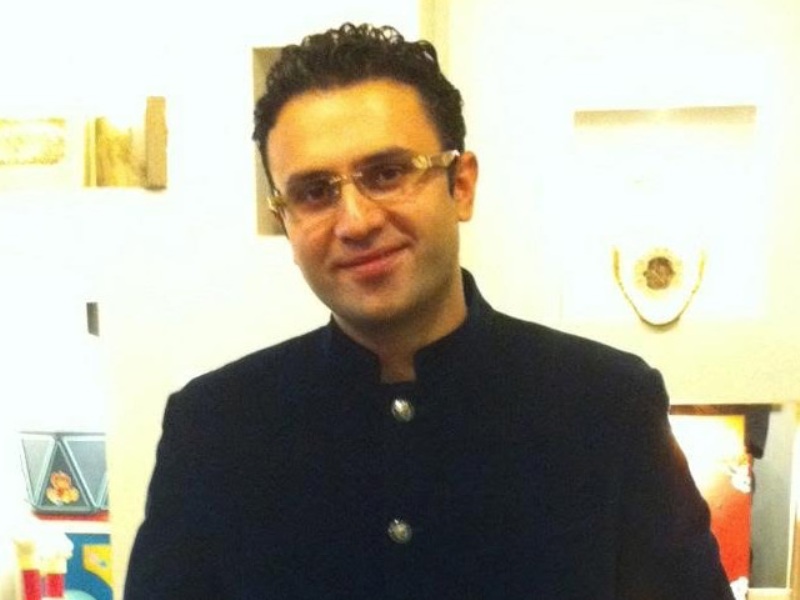 Contrary to earlier reports of the wedding being a card-free wedding, the Shahid Kapoor-Mira Rajput wedding saw a unique, customized invitation card designed by Delhi-based designer Ravish Kapoor. The designer runs a design agency called Ravish Kapoor Innovative Invitations which has showrooms in Delhi, Mumbai and Kolkata and also a studio in Los Angeles. He specialises in ‘out-of-the-box’ invitations for weddings, anniversaries, baby showers, birthdays, inaugurations and parties of every sort. Mr Kapoor says his designs aim to make “the guests go WOW and add something special to the momentous celebratory occasions that a family shares together.” 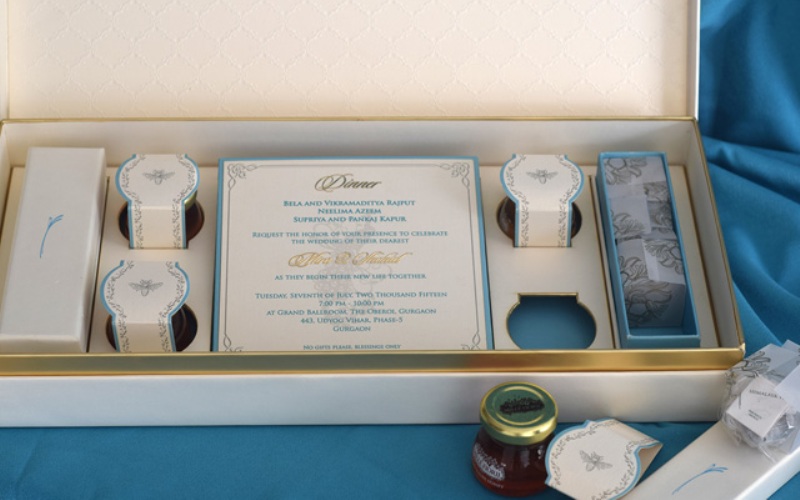 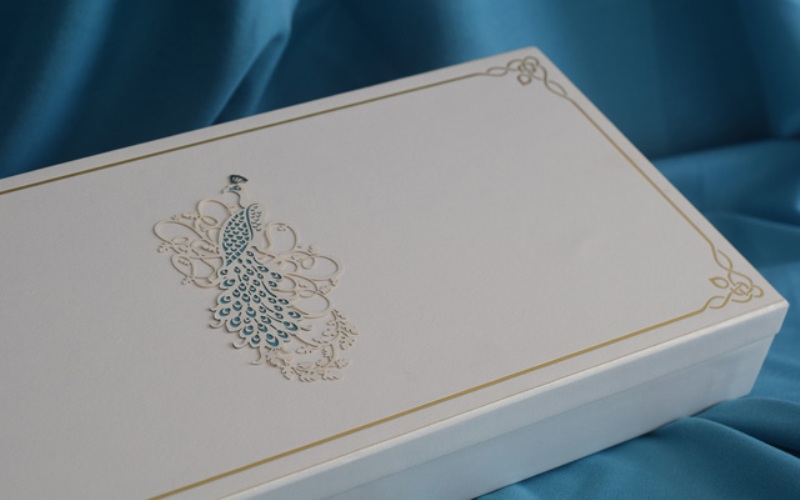 As such, Ravish designed a subtle, elegant and gorgeous white and turquoise invite for the Kapoor lad’s wedding with a peacock emblem on top and an elegant assortment of handcrafted honey and tea as customary gifts inside the invite-box. This invitation was in keeping with Shahid’s instructions of keeping the invitation simple and elegant. 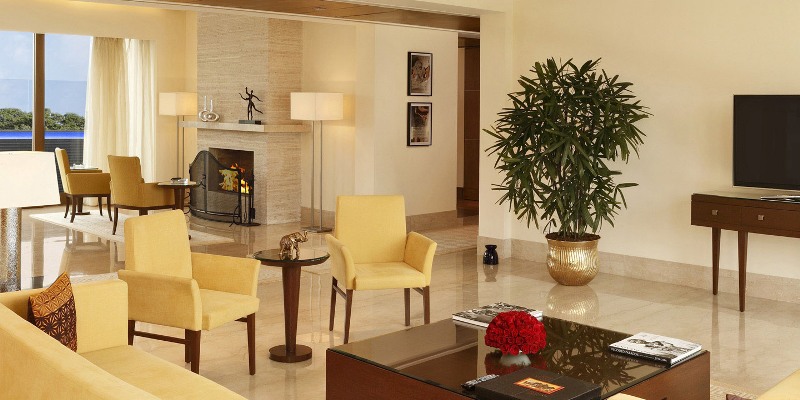 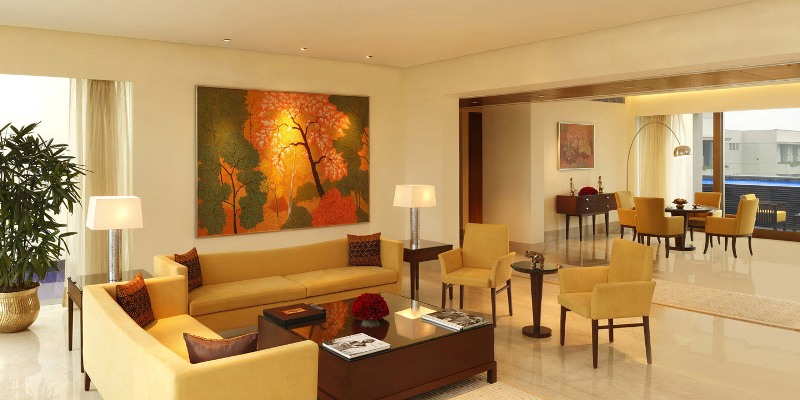 While the couple’s family and guests are lodged in Trident hotel, Shahid is himself occupying the 5300 sq feet Presidential Suite at The Oberoi Grand in Gurgaon where the sangeet ceremony is scheduled. The suite is believed to be costing the 34-year old Haider star a whopping 6,00,000 INR/night plus taxes. 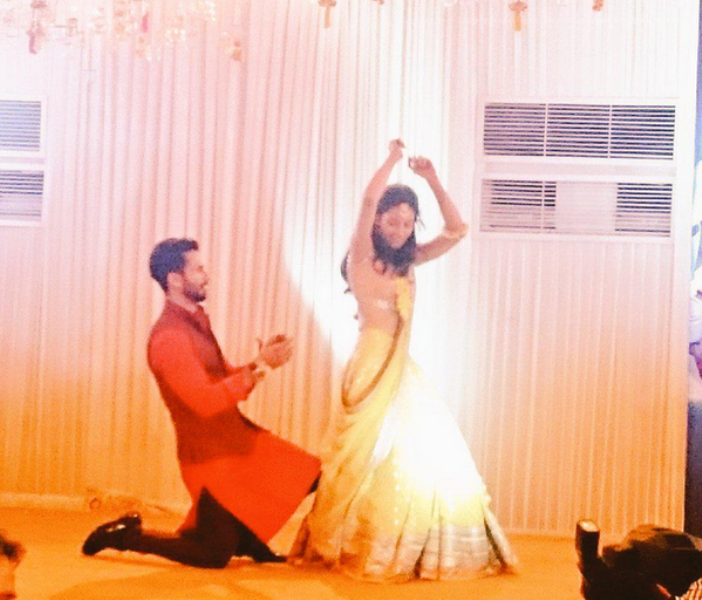 Shahid and Mira at their sangeet ceremony

July 6th saw the couple’s sangeet ceremony where Shahid Kapoor along with his lady love were seen adorned in Kunal Rawal and Anamika Khanna respectively. While the to-be-groom looked dapper in a nehru jacket fitted over a crimson red kurta and black churidaar, his to-be-bride looked elegant in a festive yellow lehenga. They were seen tapping their feet to the rhythm of many-a-Kapoor hits like Mauja hi Mauja, Gandi Baat, Dhating Naach and toward the end of the performance, Shahid was seen hugging his soon-to-be-wify and placing an adorable peck on her cheek. 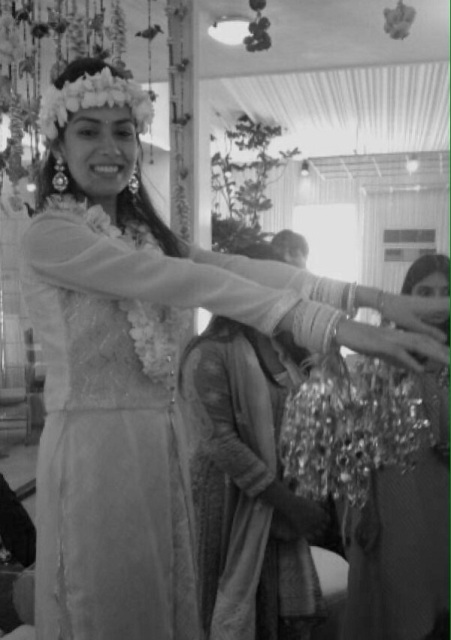 Mira at her kaleera ceremony

Mira at her haldi and kaleera ceremony

The Kaleera ceremony saw Mira don another yellow outfit and accentuate her natural beauty with Nature’s  garland of flowers and a blushing, beaming bride-to-be Mira was seen grinning ear-to-ear waiting for her haldi and kaleera ceremonies to swirl by as the ticks of the clock leading up to the eve of her wedding with beau Shahid ran by.

The wedding, which took place at Chhatarpur farm, in a simple gurudwara ceremony saw the precious couple adorned in color-coordinated wedding trousseau designed by Kunal Rawal and Anamika Khanna. The ‘Vivaah’ of the year was, indeed, a low-key affair as Shahid had formerly averred,

“I refrain from getting into details. I thought that since I am here today, it was important to acknowledge it in front of the media, so I am doing that. Other than that, she is a normal girl and I am a normal guy, and we should treat it like something normal and regular. It’s my personal space and I won’t get into the details.”

The wedding, as reported earlier, was attended only by close friends and family. But right after the ‘pheras,’ Shahid was seen introducing new bride Mira to the media when he, as always, looked super-stylish, suave and dapper in a sherwani while the now-Mrs. Kapoor looked gorgeous in a champagne pink number with a touch of the ‘Lucknow-i andaaz’ spelled out vis-à-vis her jewelery. 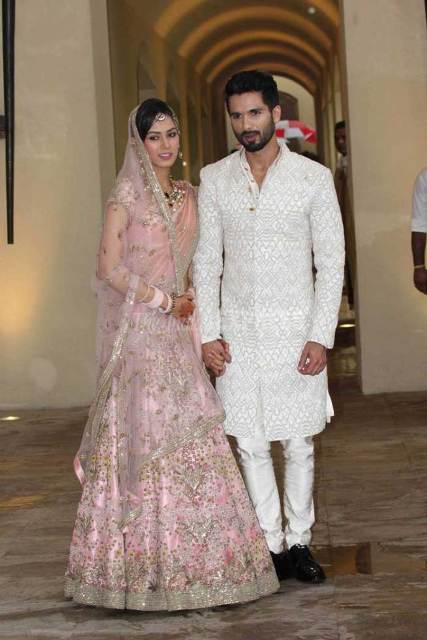 Shahid Mira posing for the press after wedding 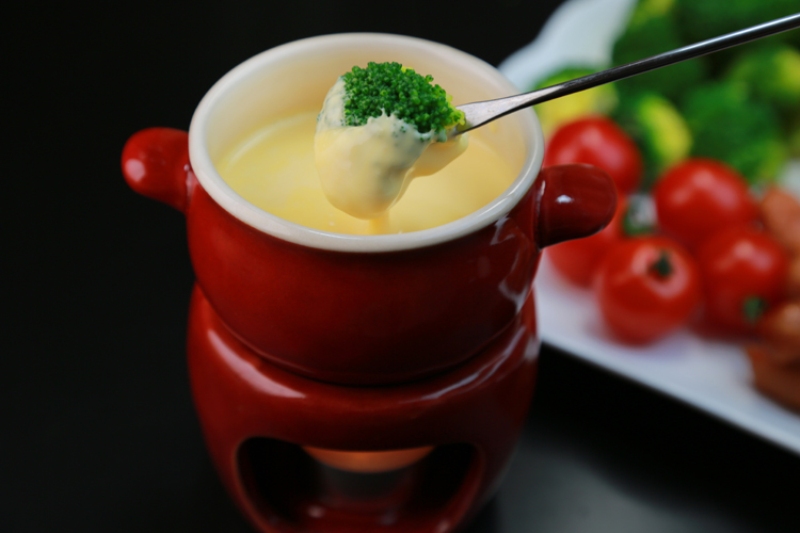 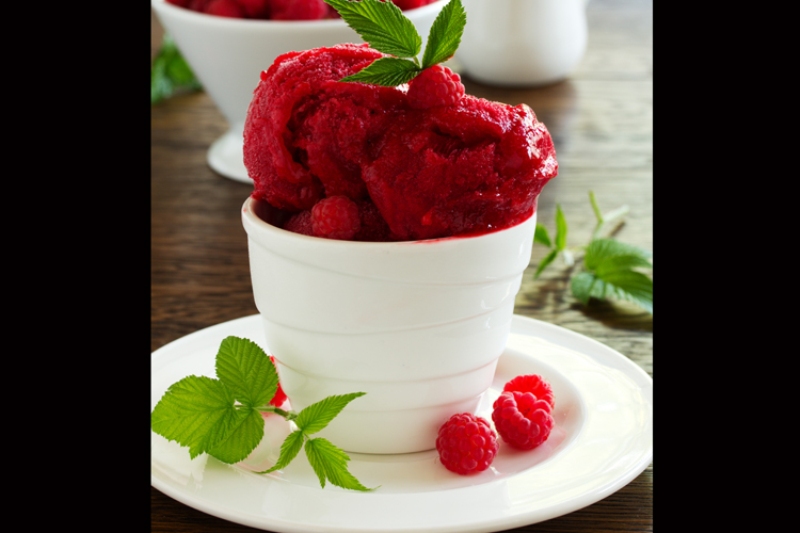 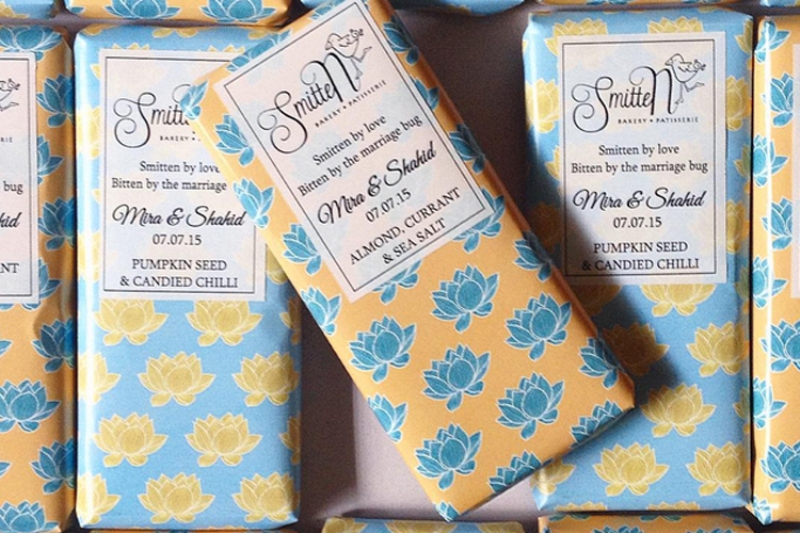 Check out the entire scoop in pics: 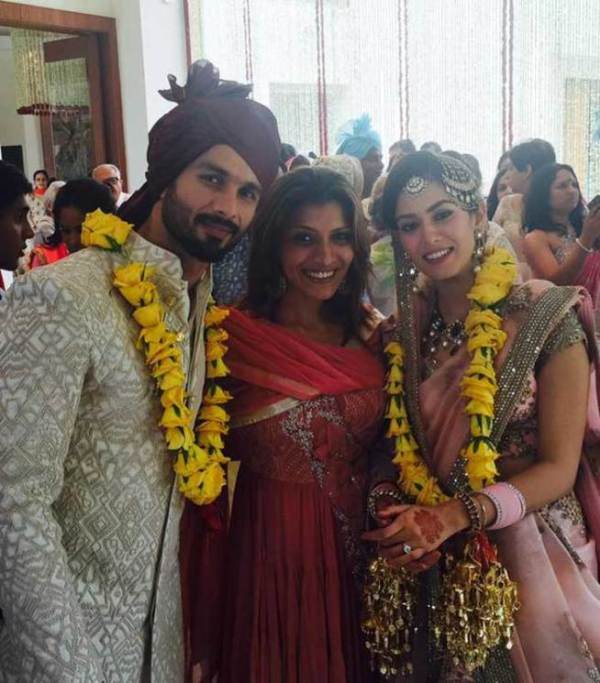 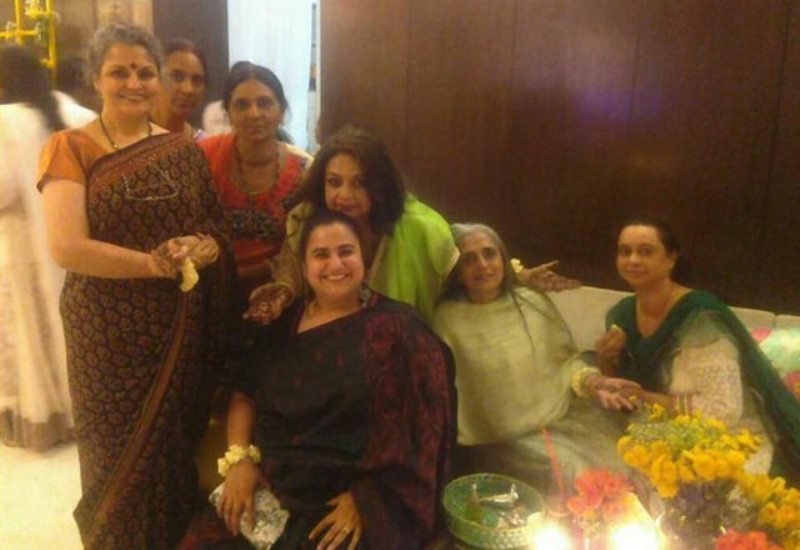 Neelima Azim (3rd from left) at the sangeet 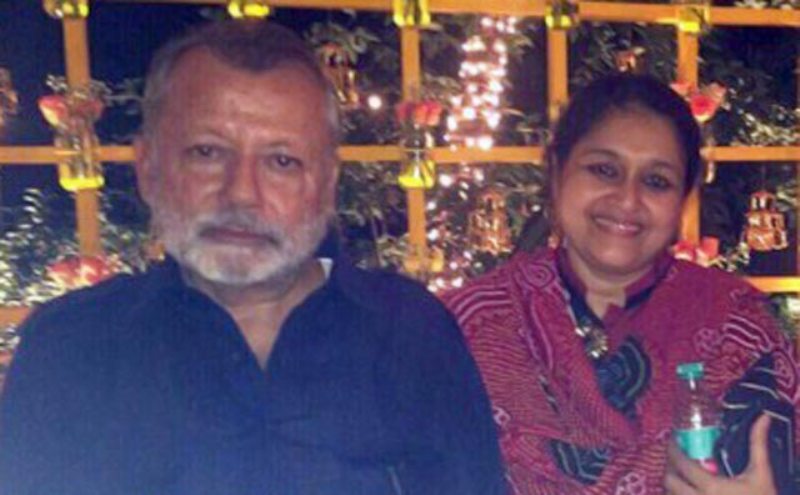 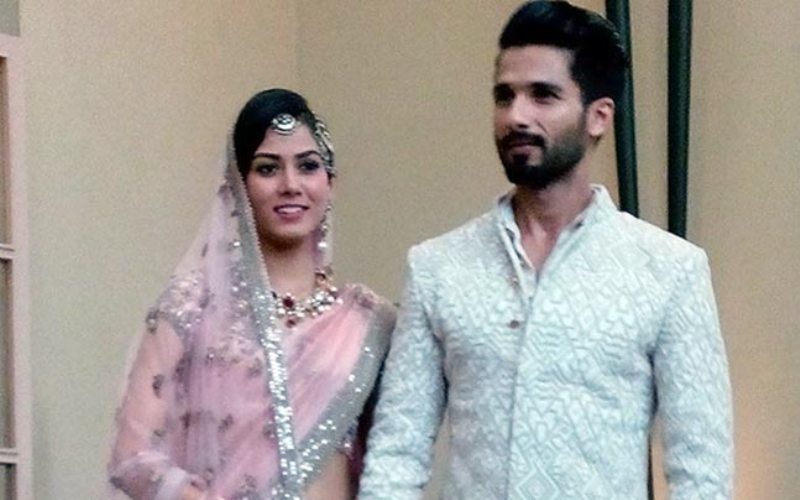 Shahid and Mira Kapoor after wedding 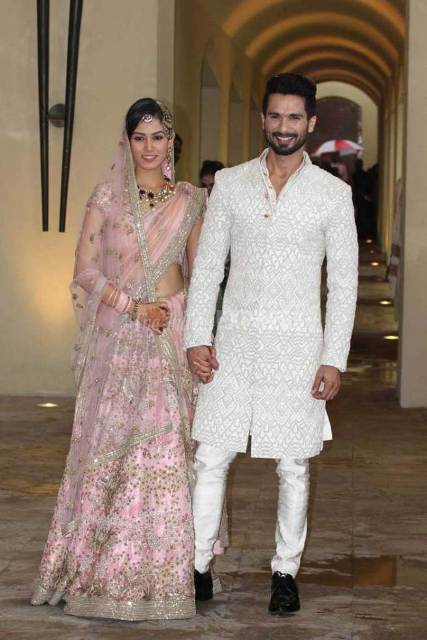 Shahid Mira at a photo-op after wedding