“Beyond Speech, Beyond Song, Only Not Beyond Love” The Poetry Of Eavan Boland

Eavan Boland is an Irish poet and author. Currently, she teaches at the Stanford University. Her poetry is known for overthrowing orthodox constructions of womanhood. Her poems offer a fresh look on both Irish history as well as mythology.

Here are 4 of the best poems by Eavan Boland that everyone must read.

My mother died one summer—

the wettest in the records of the state.

Crops rotted in the west.

Checked tablecloths dissolved in back gardens.

As I took my way to her

through traffic, through lilacs dripping blackly

and on curbsides, to pay her

the last tribute of a daughter, I thought of something

I heard once, that the body is, or is

said to be, almost all

water and as I turned southward, that ours is

every single day the elements begin

a journey towards each other that will never,

the ocean visible in the edges cut by it,

the Liffey storing one and summoning the other,

salt greeting the lack of it at the North Wall and,

as if that wasn’t enough, all of it

ending up almost every evening

mother and I drove on and although

the mind is unreliable in grief, at

the next cloudburst it almost seemed

they could be shades of each other,

the way the body is

of every one of them and now

they were on the move again—fog into mist,

mist into sea spray and both into the oily glaze

that lay on the railings of

the house she was dying in

as I went inside.

As soon as I take down her book and open it.

I turn the page.

A blackbird leaves her pine trees

And lands in my spruce trees.

I open my door on a Dublin street.

Her child/her words are staring up at me:

In better dress to trim thee was my mind,

But nought save home-spun cloth, i’ th’ house I find.

Because her words can be at home anywhere—

At the source, at the end and whenever

The book lies open and I am again

It was winter, lunar, wet. At dusk

Pleased to meet you meat to please you

said the butcher’s sign in the window in the village.

Everything changed the year that we got married.

And after that we moved out to the suburbs.

How young we were, how ignorant, how ready

to think the only history was our own.

And there was a couple who quarreled into the night,

nothing is ever entirely

right in the lives of those who love each other.

In that season suddenly our island

Broke out its old sores for all to see.

We saw them too.

We stood there wondering how

the salt horizons and the Dublin hills,

we thought we knew

had been made to shiver

into our ancient twelve by fifteen television

which gave them back as gray and grayer tears

not then, not later,

fathomed what it is

is wrong in the lives of those who hate each other.

And if the provenance of memory is

and if I can be safe in

the weak spring light in that kitchen, then

why is there another kitchen, spring light

always darkening in it and

a woman whispering to a man

over and over what else could we have done?

The times were grand in size and we were small.

Why do I write that

when I don’t believe it?

We lived our lives, were happy, stayed as one.

Children were born and raised here

As for that couple did we ever

find out who they were

and did we want to?

Immediately cries were heard. These were the loud wailing of infant souls weeping at the very entrance-way; never had they had their share of life’s sweetness for the dark day had stolen them from their mothers’ breasts and plunged them to a death before their time.

And then the dark fell and ‘there has never’

I said ‘been a poem to an antibiotic:

never a word to compare with the odes on

the flower of the raw sloe for fever

‘or the devious Africa-seeking tern

or the protein treasures of the sea-bed.

Depend on it, somewhere a poet is wasting

his sweet uncluttered metres on the obvious

‘emblem instead of the real thing.

Instead of sulpha we shall have hyssop dipped

in the wild blood of the unblemished lamb,

so every day the language gets less

‘for the task and we are less with the language.’

I finished speaking and the anger faded

and dark fell and the book beside me

lay open at the page Aphrodite

comforts Sappho in her love’s duress.

The poplars shifted their music in the garden,

a child startled in a dream,

my room was a mess—

clothes piled up on an old chair—

and I was listening out but in my head was

a loosening and sweetening heaviness,

not sleep, but nearly sleep, not dreaming really

but as ready to believe and still

when she came and stood beside me

and I would have known her anywhere

and I would have gone with her anywhere

and she came wordlessly

and without a word I went with her

down down down without so much as

ever touching down but always, always

with a sense of mulch beneath us,

the way of stairs winding down to a river

and as we went on the light went on

failing and I looked sideways to be certain

it was she, misshapen, musical—

and down we went, again down

until we came to a sudden rest

beside a river in what seemed to be

an oppressive suburb of the dawn.

My eyes got slowly used to the bad light.

At first I saw shadows, only shadows.

Then I could make out women and children

and, in the way they were, the grace of love.

she said, ‘in those days they racketed

in every backstreet and alley of old Europe.

Behold the children of the plague.’

Then to my horror I could see to each

nipple some had clipped a limpet shape—

suckling darknesses—while others had their arms

She took my sleeve and said to me, ‘be careful.

Do not define these women by their work:

not as washerwomen trussed in dust and sweating,

muscling water into linen by the river’s edge

‘nor as court ladies brailled in silk

on wool and woven with an ivory unicorn

and hung, nor as laundresses tossing cotton,

brisking daylight with lavender and gossip.

‘But these are women who went out like you

when dusk became a dark sweet with leaves,

recovering the day, stooping, picking up

teddy bears and rag dolls and tricycles and buckets—

stood boot deep in flowers once in summer

or saw winter come in with a single magpie

in a caul of haws, a solo harlequin.’

I stood fixed. I could not reach or speak to them.

Between us was the melancholy river,

the dream water, the narcotic crossing

and they had passed over it, its cold persuasions.

I whispered, ‘let me be

let me at least be their witness,’ but she said

‘what you have seen is beyond speech,

beyond song, only not beyond love;

and I heard her say but she was fading fast

as we emerged under the stars of heaven,

‘there are not many of us; you are dear

‘and stand beside me as my own daughter.

I have brought you here so you will know forever

the silences in which are our beginnings,

opened, banged and I woke up to find

my skirt spread out where I had laid it—

but it was wet and the year was late.

The rain was grief in arrears; my children

slept the last dark out safely and I wept.

Suggested read: The Archipelago of Kisses And Other Poems By Jeffrey McDaniel

This is all we have on today’s post on the Best Poems By Eavan Boland. This is, however, not an exhaustive list, and if we have missed out on some of your favorites, then please feel free to add them in the comment section below. 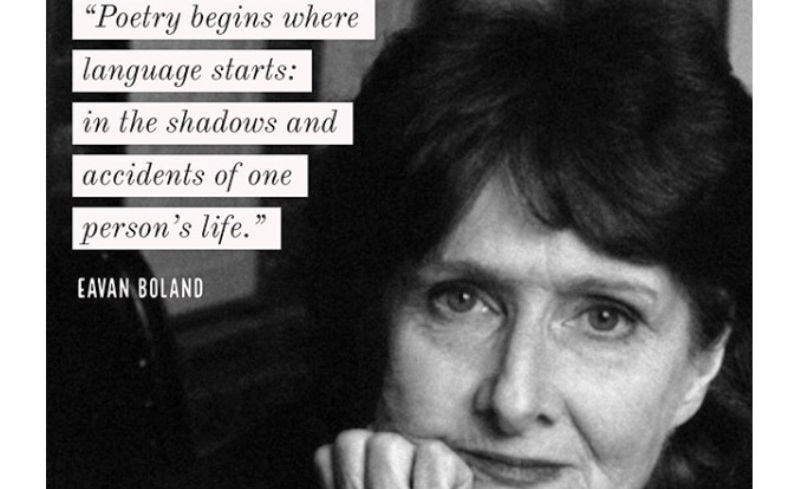