Born in St. Louis Missouri, Naomi Shihab Nye is the recipient of a number of literary honors and awards. She is the winner of Lavan Award, the Paterson Poetry Prize, the Carity Randall Prize, and numerous Pushcart Prizes. She receiver her fellowships from the Lannan Foundation, the Guggenheim Foundation, and was a Witter Bynner Fellow too.

In today’s post, we will be looking at some of the best poems by Naomi Shihab Nye.

Suggested read: The Archipelago of Kisses And Other Poems By Jeffrey McDaniel

Is water flowing in the tank?

Will they huddle together, warm bodies pressing?

(Is it the year of the goat or the sheep?

O lead them to a warm corner,

little ones toward bulkier bodies.

Lead them to the brush, which cuts the icy wind.

Another frigid night swooping down —

Aren’t you worried about them? I ask my friend,

who lives by herself on the ranch of goats,

far from here near the town of Ozona.

She shrugs, “Not really,

they know what to do. They’re goats.”

In college, people were always breaking up.

We broke up in parking lots,

across a table from me

I could not sit at that table again

though I did not know them.

I studied bees, who were able

to convey messages through dancing

and could find their ways

home to their hives

even if someone put up a blockade of sheets

and boards and wire.

Bees had radar in their wings and brains

that humans could barely understand.

I wrote a paper proclaiming

their brilliance and superiority

and revised it at a small café

Letters swallow themselves in seconds.

Notes friends tied to the doorknob,

So much of any year is flammable,

so little is a stone.

Where there was something and suddenly isn’t,

I begin again with the smallest numbers.

only the things I didn’t do

crackle after the blazing dies.

“A true Arab knows how to catch a fly in his hands,”

my father would say. And he’d prove it,

while the host with the swatter stared.

I changed these to fit the occasion.

Years before, a girl knocked,

wanted to see the Arab.

I said we didn’t have one.

After that, my father told me who he was,

a good name, borrowed from the sky.

He said that’s what a true Arab would say.

Today the headlines clot in my blood.

A little Palestinian dangles a truck on the front page.

Homeless fig, this tragedy with a terrible root

is too big for us. What flag can we wave?

I wave the flag of stone and seed,

I call my father, we talk around the news.

It is too much for him,

neither of his two languages can reach it.

I drive into the country to find sheep, cows,

to plead with the air:

Who calls anyone civilized?

Where can the crying heart graze?

What does a true Arab do now?

the rat with pointed teeth

makes his long way back

to the bowl of peaches.

He stands on the dining room table

of each fruity turned-up face

knowing you will read

this message and scream.

It is his only text,

to take and take in darkness,

to be gone before you awaken

and your giant feet

Where is the mother of the rat?

The father, the shredded nest,

which breath were we taking

when the rat was born,

when he lifted his shivering snout

to rafter and rivet and stone?

I gave him the names of the devil,

I would not enter those rooms

without a stick to guide me,

I leaned on the light, shuddering,

and the moist earth under the house,

the trailing tails of clouds,

said he was in the closet,

the drawer of candles,

his nose was a wick.

How would we live together

with our sad shoes and hideouts,

our lock on the door

and his delicate fingered paws

that could clutch and grip,

his blank slate of fur

and the pillow where we press our faces?

The bed that was a boat is sinking.

And the shores of morning loom up

things we never wanted to be, or meet,

and all the rats are waving hello.

The river is famous to the fish.

The loud voice is famous to silence,

which knew it would inherit the earth

before anybody said so.

The cat sleeping on the fence is famous to the birds

watching him from the birdhouse.

The tear is famous, briefly, to the cheek.

The idea you carry close to your bosom

is famous to your bosom.

The boot is famous to the earth,

more famous than the dress shoe,

which is famous only to floors.

The bent photograph is famous to the one who carries it

and not at all famous to the one who is pictured.

I want to be famous to shuffling men

who smile while crossing streets,

famous as the one who smiled back.

I want to be famous in the way a pulley is famous,

or a buttonhole, not because it did anything spectacular,

but because it never forgot what it could do.

There was the method of kneeling,

a fine method, if you lived in a country

where stones were smooth.

Their prayers were weathered rib bones,

as if this shedding of syllables could somehow

fuse them to the sky.

There were the men who had been shepherds so long

Under the olive trees, they raised their arms—

Hear us! We have pain on earth!

We have so much pain there is no place to store it!

But the olives bobbed peacefully

in fragrant buckets of vinegar and thyme.

and were happy in spite of the pain,

because there was also happiness.

Some prized the pilgrimage,

wrapping themselves in new white linen

to ride buses across miles of vacant sand.

When they arrived at Mecca

they would circle the holy places,

on foot, many times,

they would bend to kiss the earth

While for certain cousins and grandmothers

lugging water from the spring

or balancing the baskets of grapes.

These were the ones present at births,

The ones stitching intricate needlework into children’s dresses,

There were those who didn’t care about praying.

The young ones. The ones who had been to America.

They told the old ones, you are wasting your time.

Time?—The old ones prayed for the young ones.

They prayed for Allah to mend their brains,

for the twig, the round moon,

to speak suddenly in a commanding tone.

And occasionally there would be one

who did none of this,

who beat everyone at dominoes,

and was famous for his laugh.

Because the eye has a short shadow or

it is hard to see over heads in the crowd?

If everyone else seems smarter

but you need your own secret?

If mystery was never your friend?

If one way could satisfy

the infinite heart of the heavens?

If you liked the king on his golden throne

more than the villagers carrying baskets of lemons?

If you wanted to be sure

his guards would admit you to the party?

The boy with the broken pencil

scrapes his little knife against the lead

turning and turning it as a point

emerges from the wood again

If he would believe his life is like that

This is all we have on today’s post on the Best Poems By Naomi Shihab Nye. This is, however, not an exhaustive list, and if we have missed out on some of your favorites, then please feel free to add them in the comment section below. 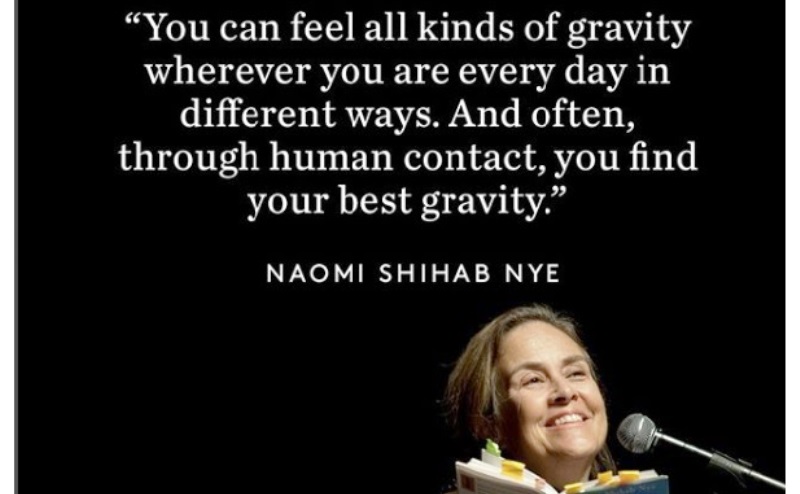