The Archipelago of Kisses And Other Poems By Jeffrey McDaniel

An American poet, Jeffrey McDaniel has five books on poetry that you must read and reread with a cup of coffee under a blanket of stars to really enjoy his words.

Suggested read: Here Are 8 Poems By Kamala Das That Cradle You While Tearing You To Shreds

Here are some of Jeffrey McDaniel’s poems that will touch your soul and change it a little.

On the red-eye from Seattle, a two year-old
in the seat behind me screeches

his little guts out. Instead of dreaming
of stuffing a wad of duct tape

into his mouth, I envy him, how he lets
his pain hang out. I wish I too could drill

a pipeline into the fields of ache, tap
a howl. How long would I need to sob

before the lady beside me dropped
her fashion rag, dipped a palm

into the puddle of me? How many
squeals before another passenger

joined in? Soon the stewardess hunched
over the drink cart, the pilot gushing

into the controls, the entire plane, an arrow
of grief, quivering through the sky.

I’m sorry I was late.

I was pulled over by a cop

flickering in my mouth.

I’m sorry I was late.

I was on my way

when I felt a plot

thickening in my arm.

I have a fear of heights.

is on the second floor

I am not the egg man.

I am the owl

another tree fall over

in the forest of your life.

I am your father

at the thought of you.

I am his words dissolving

I am a long-legged martini.

I am feeding olives

to the bull inside you.

of all the people

In an effort to get people to look

into each other’s eyes more,

and also to appease the mutes,

the government has decided

to allot each person exactly one hundred

and sixty-seven words, per day.

When the phone rings, I put it to my ear

without saying hello. In the restaurant

I point at chicken noodle soup.

I am adjusting well to the new way.

Late at night, I call my long distance lover,

I saved the rest for you.

When she doesn’t respond,

I know she’s used up all her words,

so I slowly whisper I love you

thirty-two and a third times.

After that, we just sit on the line

and listen to each other breathe.

The hoop is not metal, but a pair of outstretched arms,
God’s arms, joined at the fingers. And God is saying

throw it to me. It’s not a ball anymore. It’s an orange prayer
I’m offering with all four chambers. And the other players—

the Pollack of limbs, flashing hands and teeth—
are just temptations, obstacles between me and the Lord’s light.

Once during an interview I slipped, I didn’t pray well tonight,
and the reporter looked at me, the same one who’d called me

a baller of destiny, and said you mean play, right? Of course,
I nodded. Don’t misunderstand—I’m no reverend

of the flesh. Priests embarrass me. A real priest
wouldn’t put on that robe, wouldn’t need the public

affirmation. A real priest works in disguise, leads
by example, preaches with his feet. Yes, Jesus walked on water,

but how about a staircase of air? And when the clock
is down to its final ticks, I rise up and over the palms

of a nonbeliever—the whole world watching, thinking
it can’t be done—I let the faith roll off my fingertips, the ball

drunk with backspin, a whole stadium of people holding
the same breath simultaneously, the net flying up like a curtain,

the lord’s truth visible for an instant, converting nonbelievers
by the bushel, who will swear for years they’ve witnessed a miracle.

Suggested read: Pink In Your Color And Other Poems By Amy King

We are underwater off the coast of Belize.
The water is lit up even though it’s dark
as if there are illuminated seashells
scattered on the ocean floor.
We’re not wearing oxygen tanks,
yet staying underwater for long stretches.
We are looking for the body of the boy
we lost. Each year he grows a little older.
Last December you opened his knapsack
and stuck in a plastic box of carrots.
Even though we’re underwater, we hear
a song playing over a policeman’s radio.
He comes to the shoreline to park
and eat midnight sandwiches, his headlights
fanning out across the harbor.
And I hold you close, apple of my closed eye,
red dance of my opened fist.

If it’s any consolation, when your wife took me
in her mouth, I closed my eyes and pretended

I was a piece of wedding cake. I was the instigator,
bringing her flowers so often her co-workers

nicknamed me carnation hands. At night, I’d look
at the stars and slither my petals through her hair.

It was like we were on Mars–me staring over
her skull at one moon, her gazing at another.

What I’m really trying to say is I tumbled into her
arms like a thousand reluctant dominoes.

pay a person a dollar to just sit next to you
on a park bench and simply hold your hand?

Reminiscing in the drizzle of Portland, I notice
the ring that’s landed on your finger, a massive
insect of glitter, a chandelier shining at the end

of a long tunnel. Thirteen years ago, you hid the hurt
in your voice under a blanket and said there’s two kinds
of women—those you write poems about

and those you don’t. It’s true. I never brought you
a bouquet of sonnets, or served you haiku in bed.
My idea of courtship was tapping Jane’s Addiction

lyrics in Morse code on your window at three A.M.,
whiskey doing push-ups on my breath. But I worked
within the confines of my character, cast

as the bad boy in your life, the Magellan
of your dark side. We don’t have a past so much
as a bunch of electricity and liquor, power

never put to good use. What we had together
makes it sound like a virus, as if we caught
one another like colds, and desire was merely

a symptom that could be treated with soup
and lots of sex. Gliding beside you now,
I feel like the Benjamin Franklin of monogamy,

as if I invented it, but I’m still not immune
to your waterfall scent, still haven’t developed
antibodies for your smile. I don’t know how long

regret existed before humans stuck a word on it.
I don’t know how many paper towels it would take
to wipe up the Pacific Ocean, or why the light

of a candle being blown out travels faster
than the luminescence of one that’s just been lit,
but I do know that all our huffing and puffing

into each other’s ears—as if the brain was a trick
birthday candle—didn’t make the silence
any easier to navigate. I’m sorry all the kisses

I scrawled on your neck were written
in disappearing ink. Sometimes I thought of you
so hard one of your legs would pop out

of my ear hole, and when I was sleeping, you’d press
your face against the porthole of my submarine.
I’m sorry this poem has taken thirteen years

to reach you. I wish that just once, instead of skidding
off the shoulder blade’s precipice and joyriding
over flesh, we’d put our hands away like chocolate

to be saved for later, and deciphered the calligraphy
of each other’s eyelashes, translated a paragraph
from the volumes of what couldn’t be said.

We live in a modern society. Husbands and wives don’t grow
on trees like in the old days. So where
does one find love? When you’re sixteen it’s easy – like being
unleashed with a credit card
in a department store of kisses. There’s the first kiss.
The sloppy kiss. The peck.
The sympathy kiss. The backseat smooch. The we shouldn’t
be doing this kiss. The but your lips
taste so good kiss. The bury me in an avalanche of tingles kiss.
The I wish you’d quit smoking kiss.
The I accept your apology, but you make me really mad
sometimes kiss. The I know
your tongue like the back of my hand kiss. As you get older,
kisses become scarce. You’ll be driving
home and see a damaged kiss on the side of the road,
with its purple thumb out. Now if you
were younger, you’d pull over, slide open the mouth’s ruby door
just to see how it fits. Oh where
does one find love? If you rub two glances together, you get
a smile; rub two smiles, you get
a spark; rub two sparks together and you have a kiss. Now
what? Don’t invite the kiss
to your house and answer the door in your underwear. It’ll get
suspicious and stare at your toes.
Don’t water the kiss with whiskey. It’ll turn bright pink and explode
into a thousand luscious splinters,
but in the morning it’ll be ashamed and sneak out of your body
without saying goodbye,
and you’ll remember that kiss forever by all the little cuts it left
on the inside of your mouth. You must
nurture the kiss. Dim the lights, notice how it illuminates
the room. Clutch it to your chest,
wonder if the sand inside every hourglass comes from a special
beach. Place it on the tongue’s pillow,
then look up the first recorded French kiss in history: beneath
a Babylonian olive tree in 1300 B.C.
But one kiss levitates above all the others. The intersection
of function and desire. The I do kiss.
The I’ll love you through a brick wall kiss. Even when
I’m dead, I’ll swim through the earth
like a mermaid of the soil, just to be next to your bones.

This is all we have on today’s post on the Best Poems By Jeffrey McDaniel. This is, however, not an exhaustive list, and if we have missed out on some of your favorites, then please feel free to add them in the comment section below. 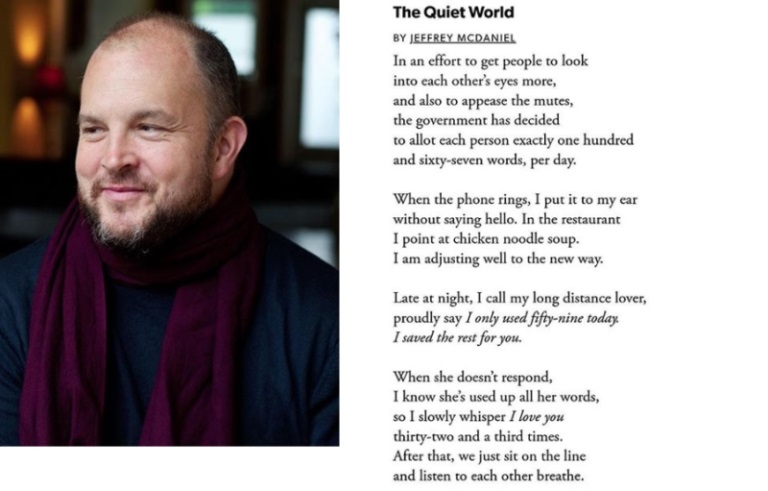 Article Name
The Archipelago of Kisses And Other Poems By Jeffrey McDaniel
Author
Riya Roy
Description
Here are some of the best poems by Jeffrey McDaniels that will touch your soul and change it a little.