#BookReview: ‘The Book Of Tea’ Is The Perfect Ode To The Cup Of Humanity

If you love tea, and see it as “Nirvana always within grasp”, if you adore language that sits on your lips and flows out of your throat as beautifully as the liquid amber itself, if you enjoy lingering “in the beautiful foolishness of things”, if aesthetic practices don’t look absurd to you, but a silent rebellion against the mundane tragedy of life, then this is a book waiting to be read by you. 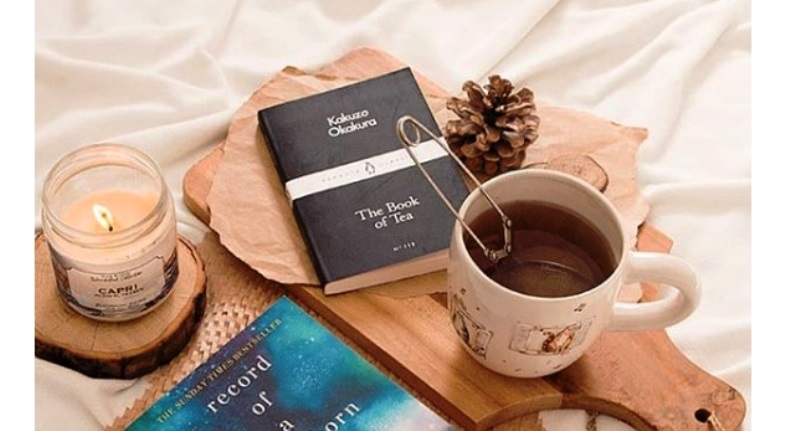 Kakuza Okakura, the author, wrote this ode to “the cup of humanity” in 1906. I discovered it this week, when my phone died on me finally for it could no longer take the pressure of being my kindle, my ipod, my dslr, and my only way to stay in touch with the three people I call friends. I had never heard of Okakura before, so I approached expecting nothing, to find a treasure that is “essentially a worship of the Imperfect.” In the book, Okakura says, “Teaism is the art of concealing beauty that you may discover it, of suggesting what you dare not reveal.” In that sense, the universe had perfectly concealed this beauty of a book in the most unlikely of stores, a grocery. And what secrets did it wait to suggest to me? These secrets, I would later find out, revealed whether I had enough “tea in me” or not.

The book is an esoteric treatise, originally written to be read aloud in the salon of one Miss Isabella Gardner, apparently Boston’s most notorious socialite of the time.  No one anticipated, however, that this little book would go on to become a classic, an encomiastic verse about a beverage that “has not the arrogance of wine, the self-consciousness of coffee, nor the simpering innocence of cocoa.”

The Book Of Tea walks you through the various schools of tea and its different periods. The evolution of tea can be roughly divided into three main categories, I learnt: the Boiled Tea, the Whipped Tea, and the Steeped Tea. The periods characterize the varied moods of Oriental culture. The Cake-tea which was boiled, the Powdered-tea which was whipped, the Leaf-tea which was steeped, mark the distinct emotional impulses of the Tang, the Sung, and the Ming dynasties of China.

The Tang dynasty freed Tea from its crude state. Luwuh, a poet born in an age when Buddhism, Taoism, and Confucianism, were seeking a home that they could collectively call their own, wrote the “Chaking” (The Holy Scripture of Tea). In the Chaking, Luwuh treats the nature of the tea-plant, the implements for gathering the leaves, the selection of the leaves, enumeration and description of the twenty-four members of the tea-equipage, the method of making tea, and the vulgarity of the ordinary method of tea-drinking.

Each section of the Chaking is so gorgeously written. For instance, here’s Luwuh talking about the best quality of leaves: “must have creases like the leathern boot of Tartar horse-men, curl like the dewlap of a mighty bullock, unfold like a mist rising out of ravine, gleam like a lake touched by a zephr, and be wet and soft like fine earth newly swept by rain.” About boiling the leaves, he says, “there are three stages of boiling: the first boil is when the little bubbles like the eye of fishes swim on the surface; the second boil is when the bubbles are like crystal beads rolling in a fountain; the third boil is when the billows surge wildly in the kettle.” If this isn’t poetry, then I don’t know what is!

Japan, which followed the Chinese civilization closely, has known the tea in all its three stages, but it is in the Japanese tea ceremony that the tea-ideals reach their climax. In Japan, tea became a religion in the art of life. As Kakuza puts it, “the tea-room was an oasis in the dreary waste of existence where weary travelers could meet to drink from the common spring of art-appreciation.” The ceremony was a drama held together by the tea, the flowers, the paintings, and the silence.  But what it hid in its folds was a philosophy, nay a great science.: Teaism was Taoism in disguise.

Taoists relate that “at the great beginning of the No-Beginning”, there was a mortal combat between Spirit and Matter. The Sun of Heaven triumphed over the Demon of Darkness and earth. However, in the agony of his defeat and death, the Titan struck his head against the solar vault, and the blue dome of jade shattered into fragments. The myths have it that “the stars lost their nests, the moon wandered aimlessly among the wild chasms of the night.” The Emperor searched for the repairer of the Heavens, and met Niuka, a horn-crowned and dragon-tailed queen who welded the five-colored rainbow and rebuilt the sky of China. But, in her haste, she missed two tiny crevices in the blue firmament. Thus began the dualism of love – two souls rolling through space, and never at rest, until they come together to complete their universe.

The Taoists believe that everyone has to build anew their sky of hope and peace, and while doing so enjoy the greatness of little things so that they can, someday, accept the littleness of great things. And what better way to do that than while sipping on some tea.

Article Name
The Book Of Tea By Kakuza Okakura Is The Perfect Ode To The Cup Of Humanity
Author
Riya Roy
Description
If you love tea, and see it as “Nirvana always within grasp”, the Book of Tea is a book waiting to be read by you.