The Imposter Syndrome: Recognize, Navigate, and Conquer The Fraud

“In many challenges – personal and professional – we are held back by the crippling thought that people like us could not possibly triumph given what we know of ourselves: how reliably stupid, anxious, gauche, crude, vulgar and dull we really are. We leave the possibility of success to others, because we don’t seem to ourselves to be anything like the sort of people we see lauded around us. Faced with responsibility or prestige, we quickly become convinced that we are simply impostors, like an actor in the role of a pilot, wearing the uniform and making sunny cabin announcements while incapable of even starting the engines. It can feel easier simply not to try.”

The Imposter Syndrome is the inherent belief in one’s own inadequacy when in the presence of others that one considers supreme. Often, we fail to distinguish the actor from the script, the act from reality. The PhD lecturer on Archeology probably started his passion in his backyard, while playing with some sharp rocks that he dug up. The Astronomy professor who seems to carry a mathematics book in her brain, probably begun by gazing at the stars and wondering what on earth they were. But the back story is not what occurs to us at the first instance. We perceive the ones around us as more accomplished, and by virtue of that, label ourselves as inferior. First identified in 1978, by Pauline Rose Clance and Suzanne Imes, this syndrome can climb up to the point where the inevitability of remaining inferior quenches our desire to try.

The behavioral patterns of people suffering from this syndrome, can be divided into roughly five categories:

They fear the lack of control even over the things that are seemingly beyond their grasp. For example, if you are producing a film, and are in charge of the script, then the poster design will be outside your jurisdiction, despite you having a perfectly good idea of it. Our actions, almost always, are influenced by outside factors- ones that we hold no monopoly over. We cannot command the editorial skills of book publishers, the designing skills of illustrators, the sensibility of directors, et al. Compulsive perfectionists find it difficult to come to terms with the legitimate fact that the world cannot run according to their clear-cut five-year plans. Often, a delay in response, a mistimed offer, or some other significant event has gotten in the way of things I knew I would surely achieve. Each one of those times, it has been fairly difficult to see how I could not have done anything to affect the course of nature.

The idea that one is not good enough, can lead to completely giving up and adopting a nihilistic view of life in general. However, on the other side, it could also give birth to a work Frankenstein. These people do not abide by the divisions of days. They rise when they can, and sleep when they cannot stay awake anymore. They will put in an excessive amount of work, much more than normal, in order to make up for an imagined ‘lack’ in their potential. These people do not always come first in class, or earn the highest revenue, but they work harder than everybody else because they have got a point to prove. The habits associated with this personality type, invite a lot of health issues. The lack of regular and healthy amounts of sleep, the constant overbearing engagement with stress, an irregular lifestyle, and the lack of relaxation, all lead to the onset of issues such as high blood pressure, diabetes, cardiovascular problems, weight gain / loss, nausea, loss of appetite, etc.

Suggested read: Building Blocks For A Productivity System That Suits You

This person has always been hailed as a prodigy, or somebody who “just knows”, or can easily achieve a feat. This happens when parents and acquaintances unnaturally boost your self-esteem throughout your childhood. One grows up with a false sense of self. The Golden Child spends a great part of their life ardently believing that things will come easy to them, or at least that their potential will never fail to achieve their goals. However, on a closer encounter with reality, they find themselves ill-equipped to deal with the oncoming hurdles. With nobody to shoulder blame, or falsely boost morale, they feel trapped in a façade that was created for them- perpetually doomed to maintain the brilliance expected of them. To add to that, there is a brutal sense of personal loss attached to failing your expectations. Realizing way into your adulthood that everything you have ever believed was a hyped-up version of your true capacity, is hard. The Golden Child either succumbs to the lure of complete hopelessness, or spends the rest of their life chasing ideal after ideal, constantly sacrificing their mental health in order to achieve the highest rank.

This type refuses to ask for help. They are afraid of seeming “weaker” or inferior to their peers. The people who suffer from the Imposter Syndrome mostly desire to achieve the level of brilliance they attribute to their peers. The Loner wishes to rise to that standard all on their own. For example, suppose all of your friends are huge comic book geeks. You nod along to everything they share, or laugh over. Often, you fake interest and understanding simply because you do not want to be left out. You read comic books in secret, and endeavor to catch up with their knowledge. You stop short of asking your dear friends to help introduce you to good sets of comics, find you suppliers, suggest torrent sites, or even give you an introduction to the whole new universe you are entering. Instead, you take up the mammoth task to do it on your own because a) You don’t want them to find out that you never knew anything about comics, b) It is humiliating for you to not be as knowledgeable as the people around you, c) You want to have achievements which you can attribute to yourself, solely. The Loner often bites off more than they can chew, and either leaves projects halfway, or damages themselves over impossible expectations.

This type is often phony, and you can tell. The Expert needs to have a more than respectable knowledge about everything around them. Their goal is not simply to learn about something, but learn about it more than most of the people around them. They need to be able to show you that they “know things”, and probably better than you. The real reason The Expert is constantly spewing researched knowledge is less because they want to show off, and more because they are afraid that somebody will call them out on areas they know nothing about. The Expert is most afraid of their imagined “bluff” or “lack of potential” being exposed. They go to impossible extents to protect their thriving reputation, but they are always sliding over thin ice.

“Factors outside of a person, such as their environment or institutionalized discrimination, can also play a major role in spurring impostor feelings. “A sense of belonging fosters confidence,” says Young. “The more people who look or sound like you, the more confident you feel. And conversely, the fewer people who look or sound like you, it can and does for many people impact their confidence.”

The first step to beating the Imposter Syndrome is to realize that you are not the only one here. There is a giant boat full of wonderful people undermining themselves like they were being paid for it.

“…I was standing at the back of the hall, while a musical entertainment happened, and I started talking to a very nice, polite, elderly gentleman about several things, including our shared first name*. And then he pointed to the hall of people, and said words to the effect of, “I just look at all these people, and I think, what the heck am I doing here? They’ve made amazing things. I just went where I was sent.”And I said, “Yes. But you were the first man on the moon. I think that counts for something.” And I felt a bit better. Because if Neil Armstrong felt like an imposter, maybe everyone did.”

The most successful people in the world feel just as scared as you do. The trick is to understand that this is the mind playing games, trying to force us into hiding our brilliance. We must not let it win. Create art, because you deserve it. Chase your dreams, be whoever you want to, read as much or as little as you want. The world needs people who are happy to be alive. We don’t need to compete with seven billion others. There is enough space on their planet to accommodate all of our dreams. 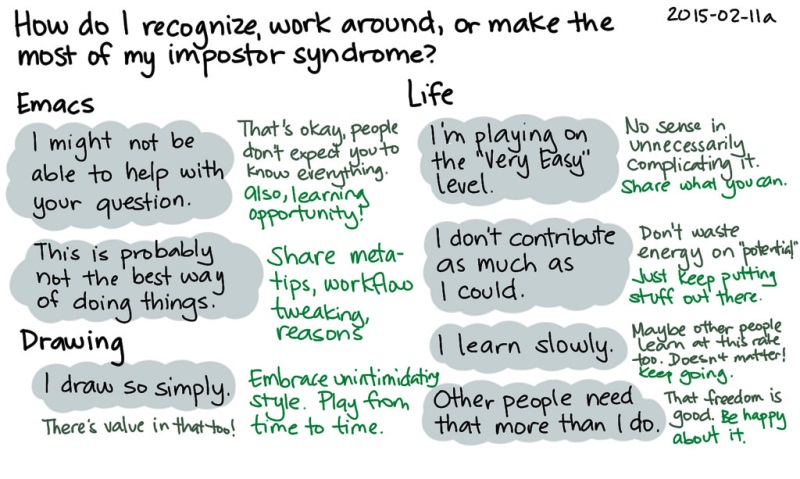 Article Name
The Imposter Syndrome: Recognize, Navigate, and Conquer The Fraud
Author
Meghalee Mitra
Description
To beat the Imposter Syndrome realize that you are not the only one here. There is a giant boat full of wonderful people undermining themselves.