When Science Took Over: A Dystopian Fiction Tale

It is 10:49 a.m. The alarm clock buzzes with a remix of Evanescence and Rabindranath Tagore. I have evidently had a rough night.

Hi, I’m…well I don’t have a name. This might seem weird to you, I presume. It is more convenient, though. My body clock is in full sync with my alarm device, so I get every last minute of sleep I need. My grandmother often speaks of a time when all-nighters were legal. You see, we have an internal clock. It beeps, buzzes, and rages in full power if we are not in bed by our selected time. The illusion of choice is quite hilarious, if you ask me. It lets you choose your deadline, but does not allow you to fail it.

Suggested read: Here Are Some Of The Best World War 2 Novels

You have probably categorized my choice in music as completely outrageous. The alarm clock does not listen to verbal mandates. Long ago, we were duped into uploading our dreams to the Cloud. Ever since then, the alarm clock gauges the kind of dreams you are having, and plays its musical equivalent in the morning. A kind of sadistic inside joke of Science. It isn’t all perfection, though. Sometimes, the alarm clocks malfunction, and display our dreams on town hoardings. I saw my dream about marshmallow monsters being projected on top of the Dabur Sugarfree stall. They don’t leak your Face Code, though. So, you aren’t publicly disgraced.

My grandmother’s name is Parvati. Sounds beautiful, doesn’t it? It is apparently a reference to a female goddess they used to worship. In Naani’s youth, they believed there were superhuman deities living in space. Neil Armstrong never saw them, but space is huge so he may have missed it. I do not know how that culture faded out. When Science took over, everybody was made to forget their lives till then. Something like The Eternal Sunshine of The Spotless Mind, but for much longer than 1:30:00 minutes. Naani has this movie in an iron chest in the attic. She was supposed to leave any trace of Old Reality behind. I could be jailed if the authorities got to know. But you won’t rat me out, I trust.

When I heard about The Wiping, it seemed familiar to the memory-stick from Men In Black. But, in India, it was far less smooth. People were regularly reminded to link their Brain to the Government Cloud. The warnings were everywhere. They wrote it on every individual cereal, made pornstars say it while they orgasmed, slipped it into John Green novels, etc. One day we found out that our neighbor experienced a glitch in transaction. Half the memories of her lifetime were lost in Error 404. The void in her Brain did not follow a linear sequence. So, she could write exactly half the alphabets, but not in order. I remember her calling me Lulu, before they took her away. Science does not tolerate illiteracy, under any circumstances. The authorities had their justifications, of course. “She was one out of hundreds of successful cases.” “If she cannot read or write, how is she going to function in the technology-ridden New Reality?”

My brain feels knotted from trying to remember her name. I am unused to having to memorize them. The Wiping took all names with it. Google Specs is great at identifying people, and quite enough for our requirements. Storing names is an unnecessary wastage of Brain Space. The government charges five Non-Internet Days for one molecule of Brain Space. We are on a perpetual scheme of filtering memories. Sometimes, I filter in Real Time. Imagine being in a conversation, and erasing every sentence as soon as it has been answered. It saves me a lot of Homework.

It isn’t smooth-sailing for everybody, though. You can’t care about the Consumer and the Capitalist equally, right? We can play Candy Crush on hoardings now. Flipping a sign to any board in a 10-mile radius. The government calls it Traffic Interaction, which is just a fancy way of saying “We can change the world, but Indian traffic is still too much for us.” Once, when a faulty SkyPore flooded Mumbai, hundreds of people threw 30,000 boards into disarray. The companies cleaned up after us, of course. They did not have a choice.

I don’t know how long it has been since I have seen the sky. This isn’t a Romantic metaphor. I literally do not know. Naani speaks of ‘years’, ‘months’, ‘days’, etc. During The Wiping, we lost all sense of time. Naani says it went on for about a thousand years, but it could have really been nine hundred. Since Time was the construct of the Old Reality, we were not allowed to use it anymore. I was 3 feet tall, when they passed the SkyPore Bill. A group of young petitioners had felt that the atmosphere was causing Global Warming. The authorities, after deliberate attempts to prove that Global Warming was a myth, shut the atmosphere out for good. They promised the laborers who were building the SkyPore, unlimited gold, but gifted them the sweet respite of Death. Come to think of it practically, meting out remunerations to 4 billion people would render the World Bank utterly insolvent. The next day, the front page of every newspaper had an elaborate apology for the “apparent fates” of these young workers. I mean, they apologized. We can’t possibly be angry any longer.

I look up at space sometimes. Of course what I see is all simulated reality, and real stars are not multi-colored. Naani has an old book on astrology that she lets me read sometimes. I know the names of all the constellations, but none of it matters. Naani and I are probably the only people who know that real solar bodies exist outside. Children pay around 5 bucks to draw their own constellation on the SkyPore. It lasts longer than their enthusiasm, but fades to black after that. Only the part directly above the Glass Castle stays lit. Naani says, long before I was born, the people here found a shard of transparent glass. They kicked, prodded, tried to eat it even, but the glass would do nothing. In the New Reality, all smooth surfaces are digitized. Imagine being able to see through the surface! What mysteries it could possibly hold in the thickness of its breadth! To keep it intact, they stored it in the fridge. When the government found out, they claimed the piece of magical stone, and hid it deep within the Glass Castle. Your eyes are allowed to scan the surface for 90,000 bucks per millisecond. They say it is sure to bring good luck.

I have never seen a war. Naani says that the Old Reality had three great wars. The first one, because it was a new experience; the second, because a thin man overestimated how much land he required; and the third one, my favorite, was fought in India, over a cow. Some moron watching Black Mirror for the first time, mistook the pig as a cow. The prospect of sexual intercourse with the mother-motif was horribly distressing to him. By the time his weed-trip settled into a normal headache, the Cow Army had taken the Human Army head-on. Students of Presidency University wore cow-suits and performed a “Hamba chorus” at six points in the town. Some people demanded a separate state for the cows. Rupi Kaur wrote the war anthem called ‘Blood and Milk’, which poetry slammers shared across all YouTube platforms. Terrifying, terrifying past. Safe to say, we no longer have cows. The government only allows cats who are aesthetically pleasing, and dogs who chase their own tail. Any other kind is flung into outer space.

The one good thing about our time now, is the lack of marriage proposals. Naani says that several women in her family faced a certain pressure at the “marriageable age”. Naani missed it by a fractional margin. In the New Reality you aren’t allowed to fall in love. Back when the free-surfing of the Internet was legal, several surveys had claimed that this move owed its birth to the Loneliness Statistic. An anonymous researcher by the name of Yogi Pop, conducted a massive survey. He proved that lonely people spend way more time consuming digital products, than ones in a mentally healthy, and stable relationship. The government passed the Franz Bill, limiting relationships to friendship only. Times Wow was outraged by the development, Soda TV played the Top 10 Romantic Movies That Will Never Happen In Real Life, and Aashiqui Now supported the move since it ensured that nobody ever gets their heart broken. Personally, I was surprised by how important people think an abstract emotion is. Naani laments the loss of what she calls “a sublime feeling”. But you can’t miss something you have never had, so I’m alright.

My internal alarm is beeping now. Soon, it will blow up into a full-fledged cacophonous orchestra. Science can be really extra sometimes. But we left Complain Forums in a different reality. Time to sleep now. There is a new day waiting on the other side of exactly 7 hours and 37 minutes. 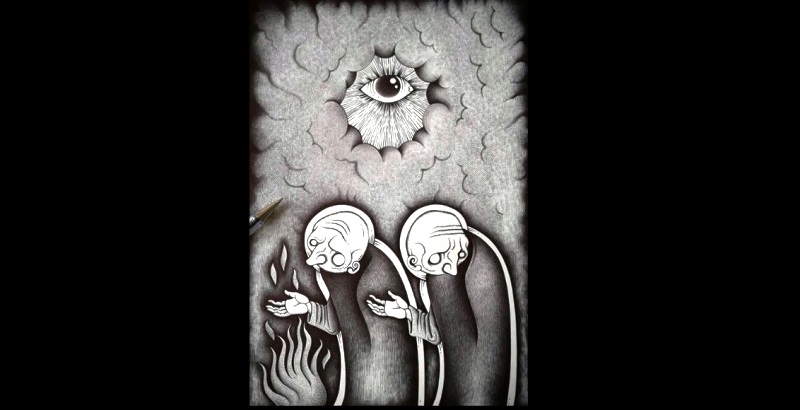 Article Name
When Science Took Over: A Dystopian Fiction Tale
Author
Meghalee Mitra
Description
Imagine that the current reality is wiped out, paving way for a new reality where science has taken over. Here's a glimpse of that world.