Rubber Banned: Here’s Why I Find The Ban On Condom Ads By The Government Hilarious

On 11th December, 2017, India banned every condom advertisement between 6 a.m. and 10 p.m. Sunny Leone’s “steamy” ad pushed the government over the edge. I find it very interesting that a hint of sex can elicit a kind of response that years of rape, acid-throwing, mutilation, murder, “accidental” police encounters, and corruption never could. Obviously un-sanskaari “indecency” is what the Government should be concerned about right now.

The world is hanging on the brink of a nuclear apocalypse, but let us focus on ‘cultural appropriate-ness’ first. The policy, put forward by Smriti Irani’s ministry, has passed this idea on the basis of such ads being “unhealthy” for children. I want to establish that the Government feels: Idea of sex = Unhealthy. Now we may proceed.

Fair Warning: This discussion is steeped in sarcasm. If you take any of my statements literally, and find your morality bruised, then you need to watch a little more of Comedy Central.

Suggested read: Regressive, Sexist Ads Banned In The UK; When Will The Indian Media Learn?

Should we promote chastity belts?

I speak in Universal Business Terms when I say that if you negate a policy, then you must replace it with another. Vacancy in business policies is a sure sign of bankruptcy. Children, from 2017 hence, will never learn about condoms because they obviously do not watch television post-10 p.m. They never use social media, or even their eyes for that matter. Since condoms are a non-existent safety measure now, we should probably be promoting Chastity Belts.

A Chastity Belt, in an ideal world, is a panty made of metal, which you can unlock with a key. The fact that your guardians hold that key is slightly unsettling, but that is a topic for another day. Women must wear these belts in order to ensure that they don’t have children, sex, happiness, or consent – wait, they never had the power of consent, anyway. My bad!

The average Indian’s idea of sex might be the 1st century version of it, but their fashion-sense is unforgiving. Metal belts don’t exactly match the Gucci and Prada merchandise. It is also supremely uncomfortable, but since we are speaking about women, comfort doesn’t really matter.

An alternate version of these belts need to be released in the market. Here are my ideas:

Suppose I need 5 eggs for the week. I go out to shop, and “mistakenly” buy 20. The first thing that happens is that my mother kicks me out of the house. The second problem is that I now have way too many eggs to handle. The second possibility is much less fearsome than the first, I admit, but it is horrific nonetheless.

The last thing India requires right now is more children. We are already competing with China for ‘Who Has The Most People And The Least Resources’ title. A little competition is healthy, but imagine trying to get the highest marks in class and killing all your classmates in the process. You would make Headlines, yes, but that is hardly the ideal way to get famous.

This is possibly the only time that I have longed for an alternate-reality version of George Orwell’s 1984. In the book, he exaggerates the extent of the FBI’s investigation into the private lives of the people. Mind you, the man wrote it long before ‘Big Brother’ became a reality. What if he wasn’t speaking about America at all? Maybe we should implement a variation of it in India. Let me explain:

The CBI has tapped into all possible camera and phone lines. The Advanced Psychology Department has discovered a formula for tapping into dreams. Every time anything remotely sexy turns up, they immediately blast the National Anthem through the speakers in your living room. That is sure to get the libido down, right? Imagine yourself listening to Camila Cabello at 10pm. 10 ‘men in saffron’ barge in through the door and wreck your music system. A priest crops up from the popcorn bowl, and tells you how “There’s something about his manner” is downright un-sanskaari. He asks you, “What thing? Has he read all the 10 thousand religious books? Does he go to the Ganga for his daily bath? Has he considered quitting his job to attain sainthood? These are the only things you should find attractive in a man, young lady.” You will then run to a forest, and live in a cave with your Significant Other. But they will trace you through the GPS known as Bodily Stench, and jump off banyan trees to interrupt your plans of intercourse. I promise you, if they replace the Five-Year-Plan with this agenda, India’s population growth will come to a standstill.

If I ever present this idea to an official, they will probably spasm for 45 hours. The Sanskaari way of preventing children is too attractive to resist. The Government of India approves.

The full-form for this is Sexually Transmitted Diseases. I just wanted to make that clear since inter-state phone calls really do not belong in this discussion.

You will let children believe that they can contract ‘cooties’ by touching each other. But you will not tell them that they could die from unprotected sex. I mean, do yourself a favor and google ‘Blue Waffle’. No, go ahead. Do it. (Don’t. For the love of god, do not.)

India has zero plans for implementing sex-education classes. You cannot tell children that sex is real, can you? Of course, a saffron stork dropped them at your ‘mandir’. Years of praying is what makes children. Not sex.

A couple of months ago, Abish Mathew made a video for Awareness Month. That was the first time that I, as a 21-year-old woman, learned that oral sex can lead to STDs. Years of speculating over the purpose of flavored condoms finally came to an end. Now, you might think that I am particularly ignorant, but all 7 of my friends were shocked about this information. 21 years into this life, I received crucial advice from a stand-up comedy video on YouTube. If YouTube is teaching us more about our health than the Education System, then something is definitely amiss.

To every parent supporting Smriti Irani’s move, I’d like to ask one important question: What would you choose between your kid dying from HIV and him/her watching a 10-second condom advertisement on television?

Illegality and the stigma of abortion

Abortion is shame-shame, right? I mean, how dare you take the life of a child before they are even born? Yes, before their birth they are literally just a pile of flesh. Yes, there are healthy and scientific methods to get the procedure done. Yes, you cannot possibly kill something that isn’t even born. And yes, somebody else’s choice of family is none of my business. But what about sanskaar and culture?

I have tried to explain the anomaly to several people, but they do not seem to understand. So, just in case the Government of India is reading this, I would like to simplify my opinion into a mathematical equation:

Unplanned pregnancy+lack of abortive options= Way too many children than you can feed, clothe, and/or keep alive beyond the age of five.

Google ‘postpartum depression’ for me. Go on. It is hard for mothers to function in the first few months after the delivery, even when they love and want the child they have just given birth to. Imagine how a mother feels when they are having a child they didn’t even want in the first place. Let me list very realistic scenarios for you:

Why would anybody want to subject a child, and their parents to such torture? If you really want to hurt a child, make them sit through a Karan Johar movie-compilation. Don’t ruin their lives under the excuse of protecting them.

There Are Things Much Worse Than Condom Ads For Children

Cable Television Network Rules (1994) states the ban of: “…advertisements which endangers the safety of children or create in them any interest in unhealthy practices or shows them begging or in an undignified or indecent manner”. I can think of many things that have a much more toxic effect on children.

Suggested read: #WorstOf2015 8 Of The Stupidest Statements Made By Indian Politicians In 2015

If you believe that a condom advertisement is the actual problem children are facing, then I do not know which century you have arrived from, but you better go back there. If you don’t teach your children about protection during sex, then they will turn into abusive parents, with too many kids, or a heavy conscience for having had to abort one too many. All of this is, of course, only possible if they don’t die of an STD first. 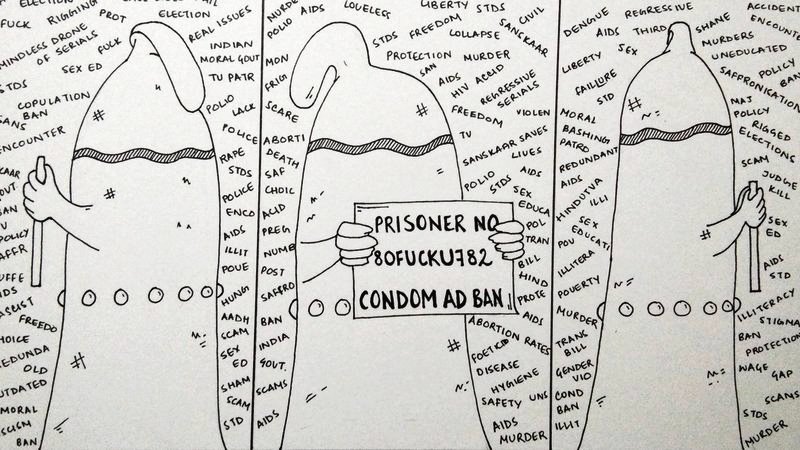 Article Name
The Indian Government Bans Condom Advertisement from 6 am to 10 pm
Author
Meghalee Mitra
Description
If you believe that a condom advertisement is the actual problem, then I do not know which century you have arrived from, but you better go back there.