In 1942, amidst the chaos and uncertainty of World War II, Vivian Boyack and Alice “Nonie” Dubes met at college in Cedar Falls, a small town in the north of Iowa. Just imagine how closed off the society would have been in terms of gender equality, let alone same-sex relationships. Their relationship was anything but regular. But the amazing and adorable ladies have been together for the past 72 years, and they were finally joined in holy matrimony on Saturday, September 6th, at the First Christian Church in Davenport, Iowa, which they have been attending for the last 66 years. 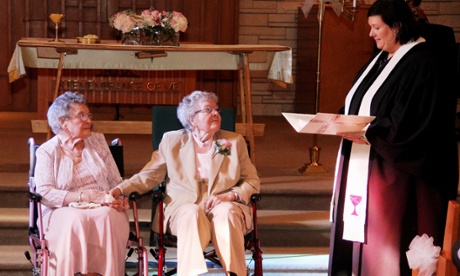 Vivian Boyack and Alice ‘Nonie’ Dubes during their wedding ceremony on Sept. 6th, 2014 in Davenport, Iowa

The couple, dressed in pretty pastels, sat side-by-side in their wheelchairs, holding hands during the intimate ceremony, which was presided over by Reverend Linda Hunsaker, who said, “This is a celebration of something that should have happened a very long time ago.” It was a poignant ceremony celebrating their love of over seven decades.

Vivian, 91, and Alice, 90, who exchanged gold rings, have seen their share of ups and downs in their long relationship. “We’ve been fine all along the way,” said Alice. “I suppose we’ve had our ins and outs, but that’s how it goes with any relationship.” 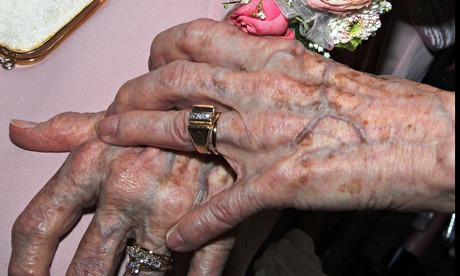 Vivian and Alice holding hands during their wedding ceremony

Vivian has taught at schools across Iowa, while Alice did mostly administrative work for a local newspaper and then a scrap metal company. During their long romance, the couple have traveled to every US state except Alaska, as well as Canada and the UK. Since retirement in 1987, the couple have been living in a retirement village.

Although it is likely that many people suspected the nature of their relationship, apparently nobody ever asked them. “I think a lot of people knew, but didn’t ever say anything – and we didn’t tell them,” said Alice. “If they wanted to know about us, that’s their problem.”

Reverend Linda Hunsaker, who presided over the ceremony, had this to say about the two ladies: “The church has always loved these two ladies, and is proud to be able to have Vivian and Nonie get married in a place where they have always been loved and accepted.” She added, “I’ve done a lot of weddings with some young people, and unfortunately I don’t think all those have lasted – and these two (Vivian and Alice) are the ones that haven’t been able to have their relationship? They are the model people that we want to be able to lift up.” Linda’s father grew up with Alice in the small town of Yale, Iowa, from where the couple originally are, making the wedding that much more poignant to her.

The state of Iowa legalised same-sex marriage in 2009, the first state in the midwest to do so.

Our hearty congratulations and best wishes to the newlyweds!