Do You Know The Best Perks Of Being In A Relationship?

Being in a relationship is the best feeling ever. You have finally found (who you think is) the one, and things couldn’t be merrier!

But do you know what are the actual and best perks of being in a relationship?

1. You get a professional, um, stuff carrier.

Want to go shopping? No worries, take your boyfriend along, he will carry those bags for you while you change into dress after dress. Chilling at the bar and don’t want to leave your drink unattended while you go pee? Fret not, he’s got you covered!

Suggested read: 12 things you want to tell the scumbag who cheated on you

2. No more extra plus ones.

‘Um, I have an extra ticket for a concert; you want to come with me?’

No more awkward conversations with friends who always come up with excuses (now, why are they your friends again?). You have a default plus one. Yay! Boo yeah, single people!

3. You can always get out of crappy plans.

‘Oh shoot! I wish I could, but I have to go visit my girlfriend’s parents that weekend!’ Of course, it is imperative that you keep your girlfriend in the loop with the lie. But hey, using the girlfriend/boyfriend card never fails and gets you out of things almost every freaking time. Honestly, the success rate is unprecedented.

4. You actually clean up.

We all know when we are single; we do not bother threading or waxing. No one even makes an effort to dress up nice. But, oh, got a boyfriend now? Waxing becomes a weekly thing, and you can finally wear all the cute stuff you’ve wanted to wear but had no real reason to! So much, so much happiness!

5. But…you can also be ugly and not feel like an ogre.

Few weeks into a relationship and you’ve entered into a comfort zone where you can lounge around in your pyjamas- with no makeup and hair undone. You’ll be eating pizza and they’ll join you, instead of judging you. Even more happiness, REAL happiness!

Television watching becomes so much more interesting with your partner cracking silly jokes sitting next to you. Or grocery shopping. Or even doing laundry together!  Ordinary need not be boring, right? Wohoo- mundane = magical!

This is the real deal. No more creepy guys texting you if you want to go on a date (because you proclaimed your relationship status on Facebook), or weird guys asking you out at bars if they can buy you a drink. So. Much. Relief. Thank you, saviour in boyfriend’s disguise!

Goodbye one night stands! Hello amazing, meaningful sex! You do not have to glam up every part of you, because you stop being so self-conscious. Also, you don’t need to deal with the question ‘Will he call me later?’ You know your boyfriend has no choice but to call you (or else you’ll just drop by! :P) And hey, no more risk of those nasty STDs!

9. Going to events you wouldn’t go to alone.

The street play you’ve wanted to see or the hot dog you’ve wanted to try from a street vendor. Because going to places like these events alone is plain sad. And also, it is a lot more fun if you drag along your boyfriend or girlfriend and click silly pictures and upload them on Instagram while bitching about the stupid stuff people post on Instagram. Take for instance this l’il snippet:

Me: If I asked you if you’d follow me everywhere, would you?

Me: Okay, then- we are going to a Honey Singh concert!

Boyfriend: oh, so hell it is! <gets up to get ready>

Suggested read: 10 mistakes we have all made as teenagers

And he will under no circumstances judge you. Only LOVE you! <3 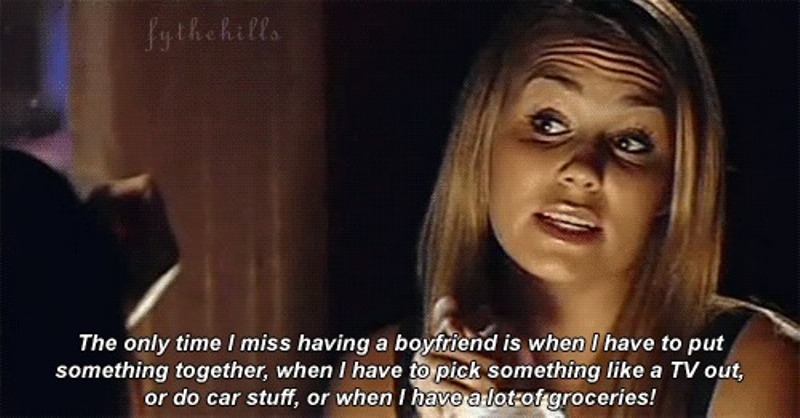