It isn’t always status, money, and looks that have to match when you are dating someone or getting married. A relationship thrives on more than just that; agreed, that love is a big part there, but so is intellect. If two people don’t get each other, their relationship will always lack something. Therefore it’s important that you and your partner share the same “wavelength” as they say. 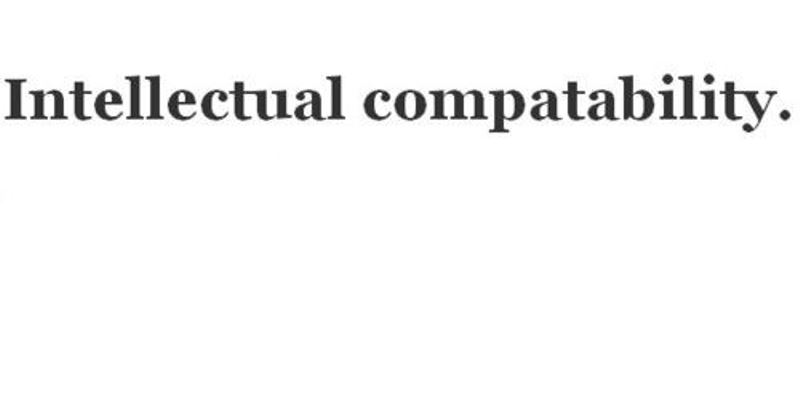 Sometimes I come across couples who are a perfect match for each other based on everything and not just their outward appearances. They have similar tastes, sense of style, humor, and thought process. In short, they complement each other very well, and that’s only because they share the same boundaries and values, often match each other’s intellects too. That said, we all know of that one couple who is a complete mismatch too. One cracks a funny joke and the other takes two days to comprehend! Or, one is overly mature and the other recklessly childish. So how is it possible to know that your partner and you are at par with each other intellectually?

Personally, for me, in general and not specific to dating, I’d appreciate greatly if someone could hold a meaningful conversation with me and challenge me at an intellectual level than have toned biceps or a sexy stubble. Appearances and presentability do count, but if I have to spend the rest of my life with a Brad Pitt look alike who can’t express himself, I’d rather stab myself in the eye! So, if there isn’t any mental stimulation, I wouldn’t care for that person too much.

Sometimes you literally need someone to sort of f**k your mind than your body (in a good way, duh!). Because one day, all those high cheekbones and chiseled jawlines will get wrinkled, the perky boobs will sag, and the shiny legs will look like chewed out chicken bones, and that day, you will be left with nothing. Because your partner probably doesn’t quench your intellectual thirst. There will be no conversations, no communication, no nothing. You may want to wake up and run away! Far away from them! So, when the outward beauty fades away, you will need that little something that you can carry on your relationship with, and that, my friends, is the intellectual bonding, that you probably think isn’t very important.

As you read this post, you will know why this is one of the most important things that two people need to be compatible with, after “love,” of course.

Within the first three dates you should have figured it out, but if somehow you haven’t, then we suggest you go through these points that could help you find out if you both are intellectually compatible or not.

It’s probably hard to tell on the first date if you both have similar views on certain subjects, but over a period of time, you realize that you either have it or you don’t. It’s important sometimes to think the same way as your partner does. A lot of successful relationships are built on such compatibility meters. It just helps when you both are agreeing to things that matter, and it makes your relationship smoother.

2. You don’t have similar views but make fair points

3. You can hold long meaningful conversations

Sweet nothings are really cute, but if you both can’t get past that, then you have a real problem at hand. One should be able to hold real and meaningful conversations with their partner. The lack of it would determine that one of you is not intellectually compatible with the other. I mean, you don’t want to sort of have to answer stupid questions for the rest of your life. When are you going to talk about your worries, fears, and wants? If one of you doesn’t recognize it, you are doomed for life!

4. Having a sense of humor and understanding it

No one likes a person who doesn’t have a sense of humor. Even if you don’t have one, the least you could do is to understand and appreciate your partner’s. But in the absence of both these qualities, you are bound to create a little misunderstanding there. So yes, humor adds to intellectual compatibility too.

5. You totally get each other

Sometimes it’s just that connect that matters; you both simply get along or rather gel well with each other. It’s about the understanding that you share and are able to relate to each other’s feelings. The understanding between you two is commendable and you probably don’t have to explain yourself to your partner because they simply get you like no one ever does! After a while, words become superfluous.

6. Your dislikes are similar

It’s alright if you don’t like similar things, but when you dislike similar things, you can bond better and get closer to your partner. It’s the best thing! So, it’s okay if you like vanilla ice cream and she likes chocolate, but what’s amazing is that you both hate lychee. So, you’d bond over not liking lychee. Catch my drift?

7. Understanding of each other’s educational background

Well, if you are someone who doesn’t understand the nature of your partner’s work or interests, in the long run, you will lose interest in them too. Mainly because you wouldn’t understand their passions and what drives them, thereby underestimating them as an individual. So, if your partner has regard for you and your educational/ professional interests, it does amount to intellectual compatibility.

8. Way past the small talk and into something concrete

If you have been able to get over the mundane series of Q&A like, “how was your day?” or, “have you eaten?” or, “isn’t it too hot today?” after a couple of dates, we hope you are then talking about more substantial topics or even discussing each other’s dreams, passions, and ambitions. Is it easy for you to talk to your partner about something you would ideally hesitate to tell anyone else? That is a good sign. It would show your willingness to open up to your partner. Also, on the other hand, your partner must create a conducive environment for you to feel comfortable talking about yourself, and vice versa.

We all have some liking to strange things, which probably cannot be explained at times. If your partner is intellectually compatible with you and is on the same page as you are, they will understand these affinities of yours. They would never ridicule you or tell you that your affinities are childish, because they respect and appreciate the differences. Respect is key.

Suggested read: 5 compelling reasons why trust in a relationship once lost is hard to regain

No matter how high your IQ is, or how daft your partner is, if you are willing to accept them and help them overcome their challenges, then you could be easing that compatibility meter a little bit. Good luck.

The success of a relationship is measured by a lot more than just physical appearances. Compatibility in general is of utmost importance, and so is intellectual compatibility. You don’t want to be stuck with a big baby, or a self-centered person, or maybe an antisocial person. Watch out for the above ten signs. So, if you find it hard to match up to your partner’s intellect, it’s time to buckle up and do something about it. Or call it quits.

Article Name
10 Ways To Know If You're Intellectually Compatible With Your Partner
Author
Steffi D'Souza
Description
Does your partner GET you? This is the intangible thing that people look for in their partner, & it's a sign that you're intellectually compatible with them.