The Ex Files: 12 Frustrating Signs Your Boyfriend Is Still Not Over His Ex

In all honesty, there isn’t a foolproof way to get over an ex. It takes a lot of time. Although sometimes you think you have gotten over them, you may be mistaken. Relationships are like that, they are easy to get into and extremely difficult to get out of.

A part of your past always stays with you, no matter what you say or do or how much you try to run away from it. In a way, it haunts you. Whether you like it or not, you will carry that little baggage with you everywhere you go.

Suggested read: 15 things to keep in mind when running into your ex might be a possibility

And if you aren’t strong enough mentally, that past will overtake you and leave you in a state of confusion and chaos. Depending on how or why your previous relationship ended, you’ll have certain feelings towards your ex. But, if you thought you had moved on and got yourself into a new relationship, then you may want to be careful about those feelings that crop up every now and then in your mind and catch you off guard.

So, if you’re dating a guy who is not over his ex yet, you may want to forgive him. Don’t get us wrong, we’re saying you need to forgive him until he has learnt to get over her. Yes, with time, people learn to live without each other. With time, his feelings should die down and if they haven’t, then you know very well that it isn’t easy for him. Then it’s time to make a choice.

On the other hand, your boyfriend may pretend that he has gotten over his ex, that he is in love with you and only you. You’ll fall for it, and then one day, after he has professed his feelings for you, he’ll just say something random or do something silly that will make you doubt him and his feelings for you. You’d probably not know how to react to it, but then you know one thing for sure – he still has feelings for her. We sincerely hope, you don’t get to that day ever.

So prepare yourself to check if your boyfriend exhibits any of these 12 frustrating signs that show he’s not over his ex.

1. He keeps in touch with her

Although this isn’t a crime, when a guy keeps in touch with his ex, he surely is up to something. Think about it, would you keep in touch with your ex if you feel nothing for him? Especially when it comes to an ex, people have ulterior motives when they want to keep in touch. The incessant messaging and calls are proof that he still hasn’t gotten over her.

2. He still talks about her

Whether it’s with you or his friends, he still recollects memories they shared together and narrates those stories about her. When your boyfriend talks about his ex all the time, you know for a fact that he’s not over his ex. When you visit a restaurant or simply watch a movie, he is reminded of her and he tells you about it. That’s a sure sign that he still is hung up on her.

3. He makes himself available for her

Even if that means canceling plans with you! He makes himself her handyman and is at her beck and call. His priorities may be goofed up here, but he won’t hesitate to be there for her anytime she wants him. If your boyfriend is constantly at her service totally disregarding you and making you his priority, then you know that there’s something going on there. Or at the very least, he’s hoping that something would happen with her.

You catch him talking on the phone with her about how he feels, or you see texts that read ‘I’ll always be there for you’ or something similar. Then you know he is getting emotionally dependent on her. This is pretty common; for people who have spent a lot of time in a relationship, there is an emotional connect there. Sometimes it’s hard to detach from that connect, and  if your guy is still depending on his ex for that emotional solace, then it’s certain that he still has feelings for his ex.

So, both him and his ex have moved on and are now seeing different people. But that hasn’t gone down well with your boyfriend, because he detests the person his ex is now dating and he expresses his concern for her. So, whenever he bumps into her or sees her pictures on Facebook with her new lover, it upsets him. More than getting upset, he gets annoyed and it makes him unhappy. So, clearly he doesn’t like the new guy his ex has found and thinks he isn’t good enough for her.

Suggested read: 16 strong signs your ex wants you back in their life

6. Her stuff is lying around

Her shampoo, her hair bands, her books or even some of her clothes. If you find any of her things that are lying around his house still, then you know for sure that he’s not over his ex. These little things are constant reminders for him about her. They mean something to him, he likes having them around because it reminds him of his ex. They’re his tangible link to her. What you should be worried about is the fact that he still wants to remember his ex!

7. He has her pictures

Whether it’s on his phone, desktop, on the wall, or simply in his drawer, he has her pictures of her all around him! That should tell you something. Pictures are memories and seems like he is still cherishing all those fond memories of her.

8. Their relationship is now platonic

While he isn’t cheating on you with her or anything, he still is very clingy with her. He shares a kind of closeness that you are uncomfortable with, they still hold hands, or attend weddings as each other’s dates. That is just not right. Yes, it is platonic, but it’s his only way to stay close to her and he isn’t afraid to use it. Because in his mind, she still plays the role of his girlfriend.

So she still comes to him to get his advice on anything she has to make a decision. Whether it’s a new guy she’s thinking of dating, a new job she’s considering, a course she wants to take up, or simply contemplating new curtains for her living room. He advises her often and is looking out for her even after they’ve broken up. His overriding care and concern for her makes it worse. The fact that he still cares about her that much should tell you that he’s not over his ex.

Sometime back, they walked hand-in-hand as a couple, but now they claim that they are each other’s best friend! How is that even possible? How do you trust that? Can ex-lovers really be mere friends? We highly doubt that. The minute he comes up with something as ridiculous as this, you must know. Once lovers can never be good friends; maybe they can be good friends but not best friends. It would be weird. Because at one point, they were intimate with each other, and now they claim that they are just friends? It’s a little hard to digest, so look out!

So you baked him some cookies and his immediate reaction was to compare your cookies to those of his ex! Well, what can we say now? He sure is comparing you with his ex. In his mind, he still hasn’t gotten over her. His constant comparisons make you feel like you are competing with her. You’re in a competition with an invisible opponent in an imaginary contest! You have no chance of winning this! He may not be doing this on purpose, but he doesn’t know better than to compare. So subconsciously, he is still thinking about her.

Suggested read: 10 outrageous ways to get revenge on your ex for cheating on you

12. He complains about her

Maybe talking good about her all the time would piss you off, but whining and complaining about her is also not good. So, a part of him still has feelings for her, feelings of hate, contempt or simply jealousy. He uses all that energy to speak ill of her, ridicule her, and demean her. Don’t get fooled by this, it doesn’t mean he is over her.

A guy may tell you he loves you, but sometimes the thought or sight of his ex flusters him, puts him in a mode that you are unable to comprehend. Or he simply struts around doing things for his ex that are undoubtedly signs that scream out he isn’t over her yet. That’s when you know this is real. It can be frustrating to be with a guy who is hung up on his ex, while you are trying to give this relationship your 100%. It’s not fair, we agree. And we suggest you take a stand and decide what you want to do. Time may not always set everything right; sometimes time will only make it worse. 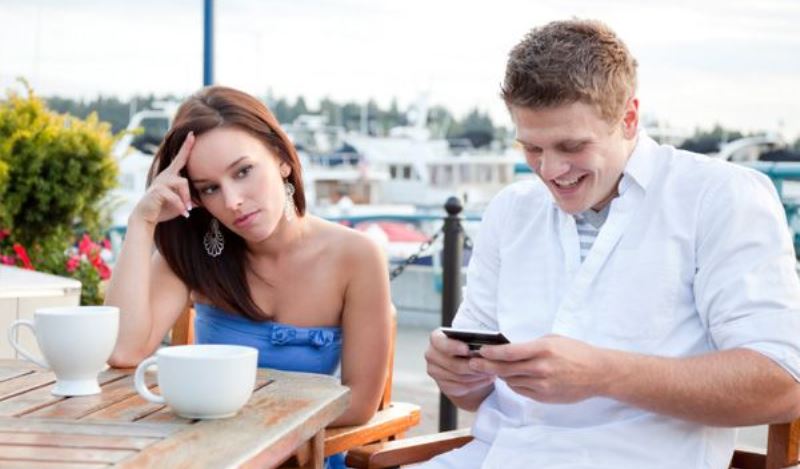 Article Name
12 Frustrating Signs He's Not Over His Ex
Author
Steffi D'Souza
Description
Is your boyfriend talking about his ex? Is he her BFF and emotional crutch? Beware, for these signs point towards the fact that he's not over his ex - yet!