Feminism is a highly relevant and largely misunderstood movement, which simply put- advocates for the equal rights for everyone. According to the Merriam-Webster dictionary, feminism is:

1.The theory of the political, economic, and social equality of the sexes.

2. Organized activity on behalf of women’s rights and interests.

Unfortunately, the simplicity of the agenda that all feminists believe in, no matter what sub-type of the movement they adhere to, is impossible for some people to comprehend, and as a result, a large number of myths about feminism have emerged. This results is the association of several negative stereotypes with what feminism means, which acts as a deterrent to the true purpose of the movement. 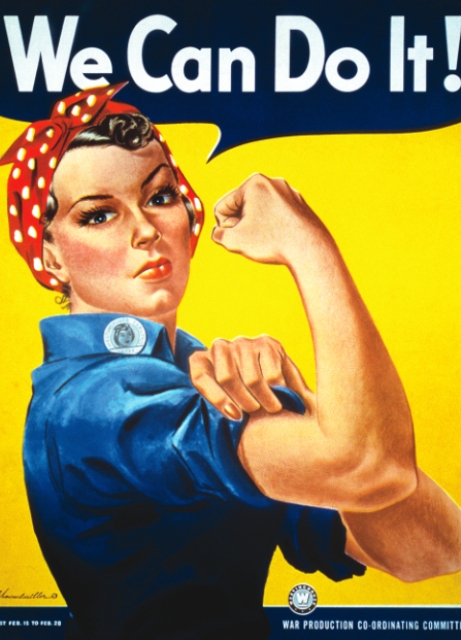 Here are 12 myths about feminism that you might consciously or unconsciously believe in, and the actual truth behind them!

Suggested read: Common Arguments Against Feminism And How To Respond To Them 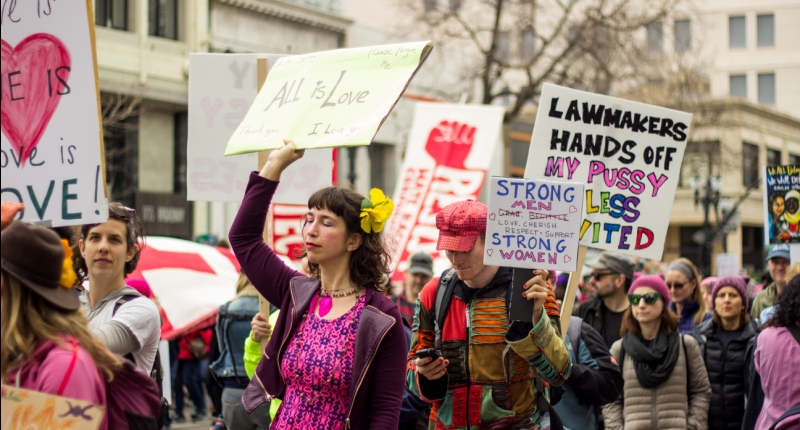 To clarify once and for all, the concept of hating men is called misandry, and not feminism. More often than not, feminists are painted as this man-hating force of angry women who burn bras and wish for the death of all men. This concept couldn’t be farther from the truth. The fundamental agenda of the feminist movement is to establish equality, irrespective of sex, race, ethnicity, gender identity, or anything else. This means that they also advocate for the justice of men when they have been wronged. True feminism believes in true equality, whether it is for men or women or non-binary people.

2. “All feminists are bra-burning lesbians” 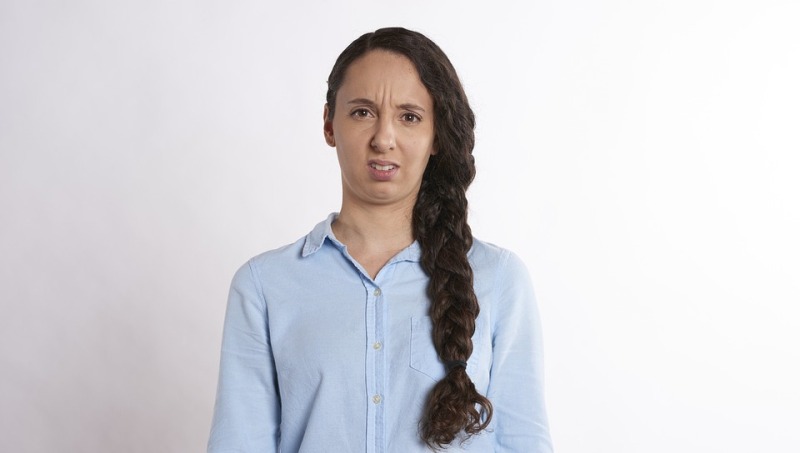 This widely believed and prevalent myth would be funny, had people not believed it with so much seriousness. This myth is one of the reasons people are afraid to call themselves feminists, in case people conjure such a radical mental image of them. The truth is, the anger of feminists is grossly misrepresented as destructive, when all they want is equal rights for everyone. Feminists belong to all races, all ethnicities, and have various sexual orientations, because feminism is not a physical affliction, but an ideological belief, shared by both men and women of all kinds. 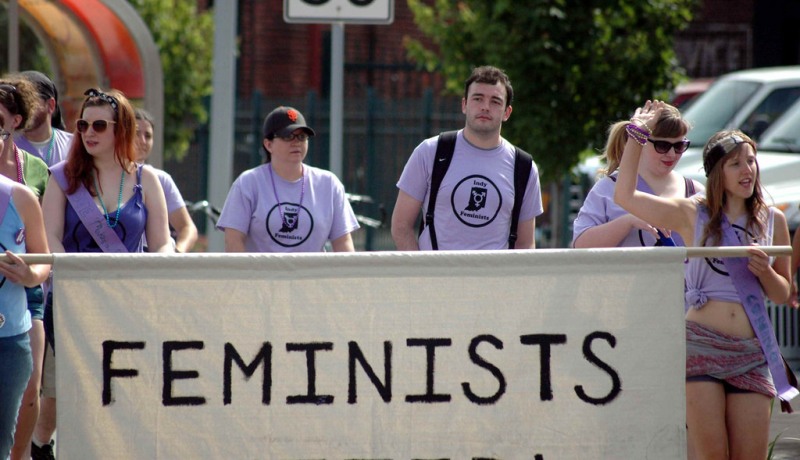 Another prevalent myth about feminism is that only females can be a part of this movement, and believe in the equal rights of women. The concept itself is absurd, and shows feminism in a harsh, non-inclusive light. The goal of the feminist movement is to dismantle the patriarchy and make its regressive tenets obsolete. The patriarchy is a force that has been in operation since time immemorial and can affect people of all genders, making feminism a necessary ideological practise in the lives of all the people who believe in equal rights. This ideal can be advocated by people of all genders, and not necessarily women. 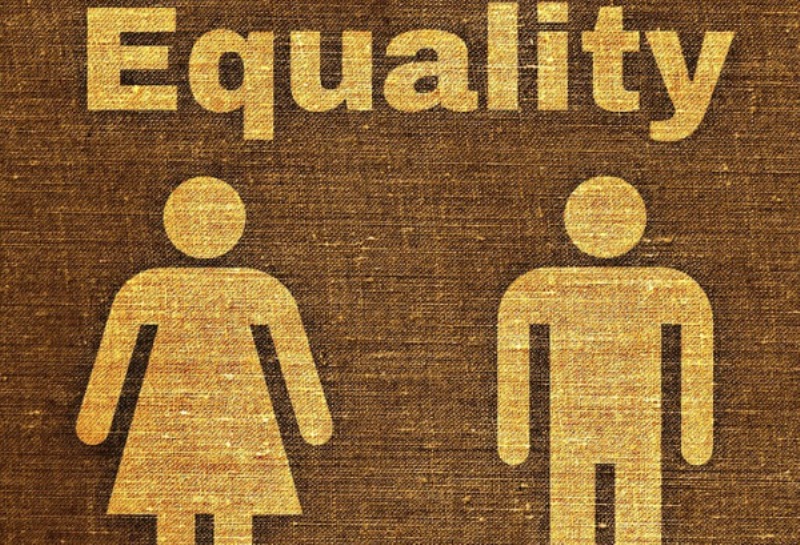 To believe that a movement advocates the superiority of one gender over the other goes to show that the mindset of the society is attuned to the preponderance of one gender over the other, at any given point of time. In their minds, men are superior to women, and the purpose of feminism is to establish that the opposite is true, and that women are actually superior to men. The problem is, destroying this very concept of gender hierarchy, where one gender is superior than the other, is one of the agendas of the feminist movement, because so long as the patriarchy, or the matriarchy exists, equality will remain an obsolete ideal.

5. “Feminists don’t believe in marriage or staying at home” 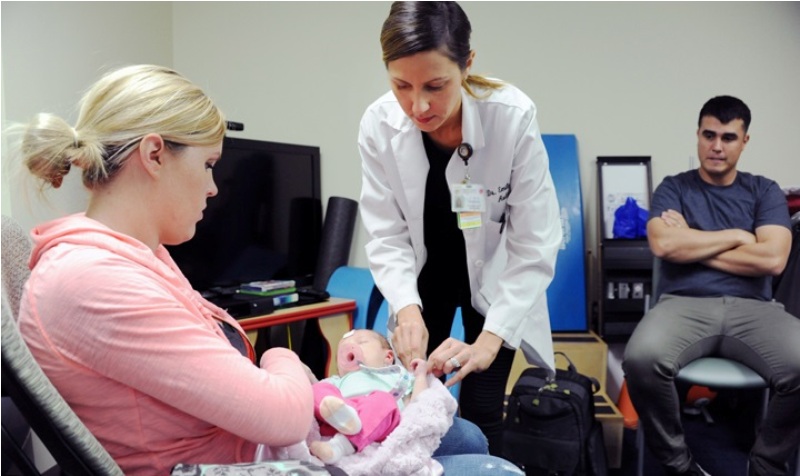 Feminists are often stereotyped as career-oriented, objective, detached creatures, who look down upon women who get married and choose to be stay-at-home moms. In fact, it is also believed that they don’t like to bear children at all. This is a gross misinterpretation of the choice that is given to women to do whatever the hell they want with their lives, which is one of the primary tenets of feminism. According to Zerlina Maxwell from Mic.com,

Feminism and motherhood aren’t mutually exclusive, and the fact that feminists have long fought for access to reproductive health care does nothing to influence this fundamental truth.

Feminists simply want the agency and freedom to decide when and under what circumstances they have children.

A woman can be married, pregnant, childless, single, working, or staying at home, and still be a feminist at the same time, without compromising any of her beliefs.

Suggested read: The Next Time They Dismiss Feminism In These Ways, Here’s How You Should Respond 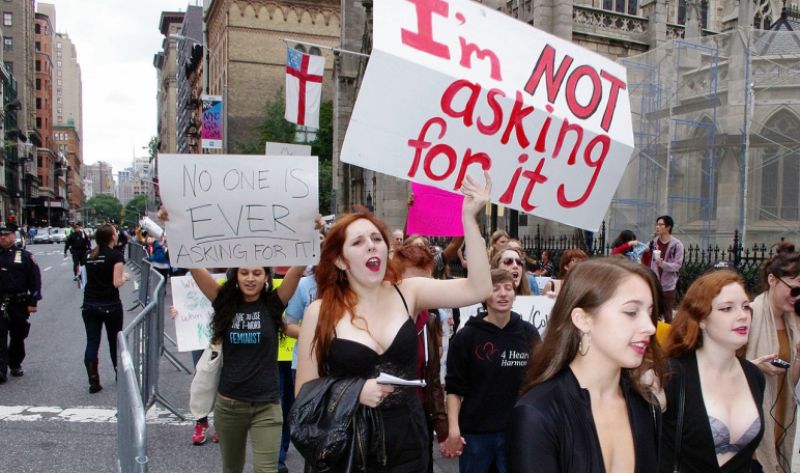 The very fact that society defines what women should or should not look like and wear certain clothes and behave a certain way when they openly adhere to a particular ideological principle makes the need for feminism apparent. Feminism is about giving women the choice to do whatever they feel like, and dress up however they like, irrespective of what they believe in. Just because a woman is wearing a dress and makeup, doesn’t disqualify her from being a feminist, and just because a woman is wearing a pair of jeans with cropped hair, doesn’t automatically make her a feminist. 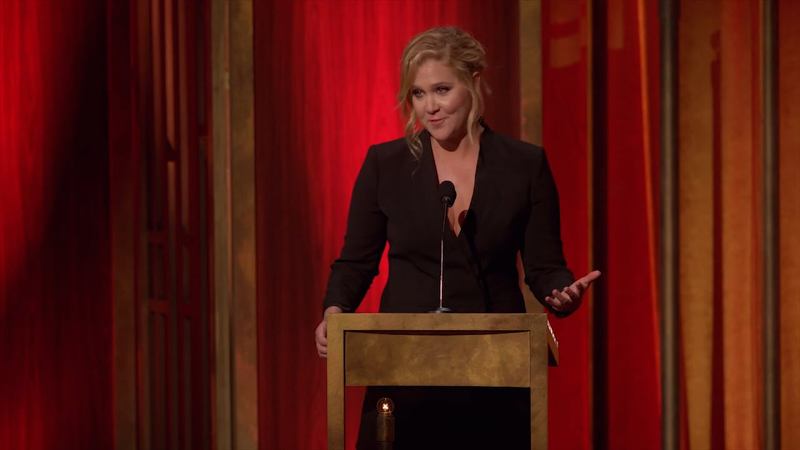 Well, this isn’t as much of a myth as others, because feminists are serious. Only, they don’t find things like rape jokes and misogynistic practises and the overwhelming domination of the patriarchy which subjugates everyone other than straight, white men, particularly funny.

Apart from that, feminists are also people, which might come as surprising news to some. They know how to have fun, they know how to take jokes and make jokes and can be hilarious as hell when they want to. But if you are waiting for them to laugh at sexist humor and rape culture, then that isn’t going to happen. *frowny face* 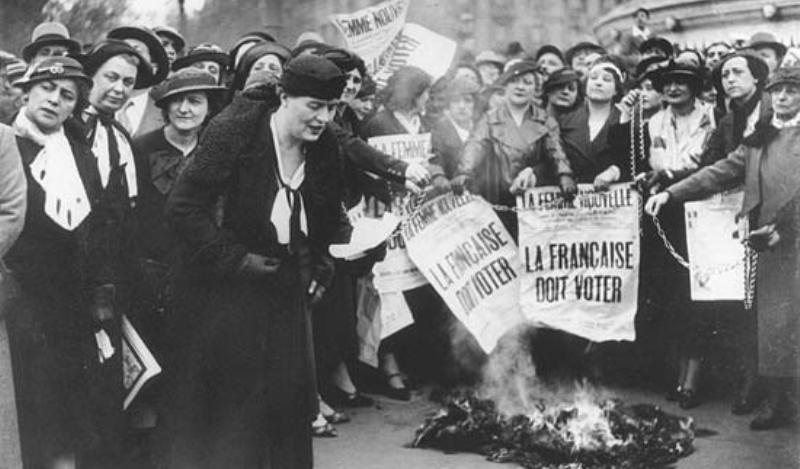 Even though it is true that society has progressed quite a bit since women were not allowed suffrage, it doesn’t mean that the world has reached peak progressive state. The fact that the feminist movement is getting stringer and is a constant topic of discussion in every sphere of life, is because it is needed more than ever to allow women to occupy the space they deserve in society, on equal terms and on equal grounds with all privileged  parties, a.k.a. straight, white men.

9. “All feminists believe the same thing” Like all large-scale political and social movements, there is bound to be a certain amount of branching out and creation of internal factions. There are various kinds of feminists, who believe in different means but work towards the same ends. Feminists can be pro-choice, or no-choice, or have various ideas regarding sex as an empowering force, and the like. However, all of their various believe system work towards the same goal: ensuring the equality of women politically, socially, economically and psychologically. This doesn’t however mean that the people involved in this movement are internally divided. Like I said, it is the use of various means to work towards the same end.

The term ‘paranoid’, ‘obsessive’, ‘annoying’ and ‘hysterical’ along with many others, have been used for several years to silence several generations of outspoken women who have tried to express their opinions. By calling feminists paranoid, you are dismissing the entire purpose and logic of the movement and making it obsolete, which is a stupid thing, really, because there are issues in society which have to be brought to light to bring out the injustice that they mask under the garb of patriarchal tradition. The noise and the clamor that is done about things that were previously silently accepted, such as domestic violence, anti-abortion rules, rape, wage gap, etc. is necessary and a progressive, gender-equal society. 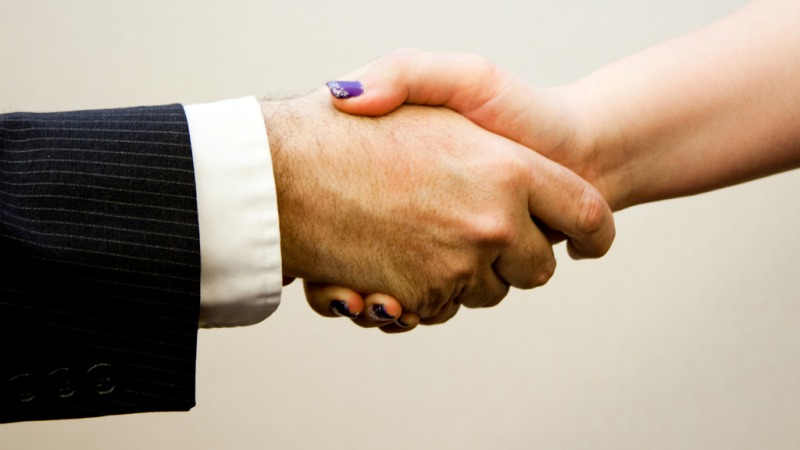 The people who created this myth, or truly believe in it, are more often than not, butt-hurt straight men who do not have any idea of consensual sex. Sex is a totally normal thing that two adults can engage in with mutual consent. As long as those clauses are fulfilled, there is no reason why feminists shouldn’t have sex. In fact, sex is a highly enjoyable thing and has several health benefits. There is no logical reason why people who are feminists should hate having sex, unless you think logically. The only scenario in which that would be true is if the sex was without consent, in which case it would be rape.

12. “All feminists are feminazis” 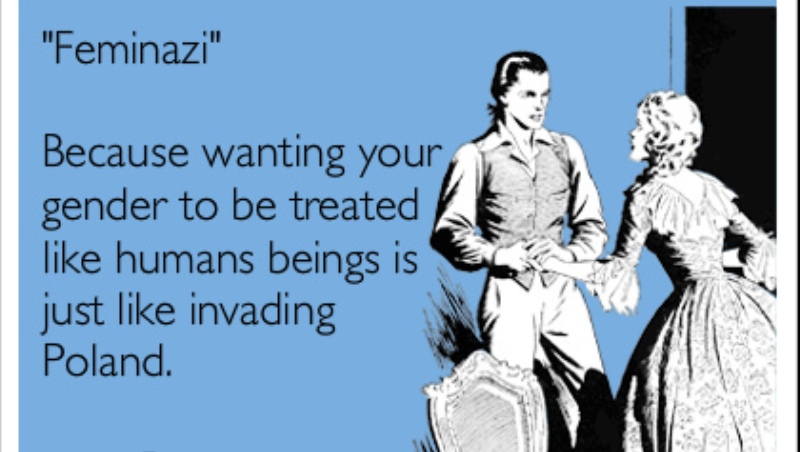 The worst possible myth about feminists is possibly this whole idea of the feminazi, which is usually a term that is attributed to violent and misandrous radical feminists. However, let us take a moment here to analyze the term. Nazis were a highly oppressive, anti-Semitic political party in Germany that emerged under the leadership of Hitler, a party which killed millions of people based on race and was the very definition of oppression and violence. To compare a group of people advocating for equal rights for their gender and all non-binary people, is proof of how fragile masculinity and the patriarchal ideal can be.

These myths about feminism are only the tip of the iceberg when it comes to misunderstanding feminism and putting women down in order to uphold the patriarchy. However, if you have been unconsciously subscribing to one or more of these myths, you know better now. 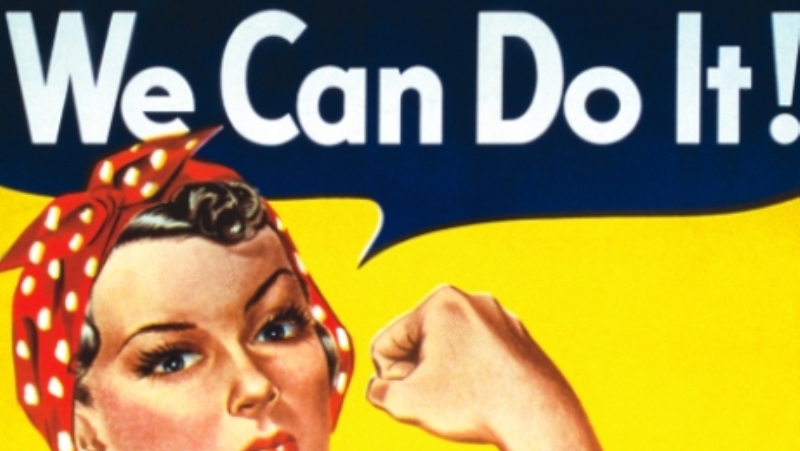 Article Name
12 Myths About Feminism: BROKEN!
Author
Aishani Laha
Description
Even though feminism is a long persisting, worldwide movement, there are some myths about feminism that give the movement and all feminists a bad name. Here are the most common myths, debunked once and for all!