12 Subtle Signs You Have A Psycho Girlfriend

“Love looks not with the eyes but with the mind, and therefore is winged Cupid painted blind,” wrote Shakespeare. So, you met this wonderful girl and fell in love with all she was. You have been going out together for a while and things were really rosy in the beginning. But now you gradually realize that your relationship is not going places after all. Your girlfriend is possessive to the power of infinity and a number of insecurities have popped up between the two of you. This has led you to questioning if she is the right one for you since most of her activities are rather disturbing.

You have been wondering many times now if you should take a step back, but you are not sure what questions you should ask and how to approach them. There have been instances when you have been so driven to the edge that you have even considered she might be a bit psycho –  of course, we mean this in the general sense of the word and not indicating any medical condition.

Yes, some people can be fiercely demanding and irritatingly confusing making them a whole lot harder to understand. They behave in a weird manner, and in the process of doing so, manage to drive you insane and often leave you hanging. Following this, there are a number of questions that arise in your mind. She might not be harming you physically, but the mental inquisitions are draining your energies and leaving you sick and tired of love and life.

So, have such thoughts about your girlfriend being not-so-normal crossed your mind recently, and now you are trying to figure out how to deal with this? If yes, then it’s high time you realized that the girlfriend you have could be a psycho girlfriend, and here are 12 subtle signs that will help you decide once and for all what you’re dealing with. This should force you to take a good look at your relationship and seriously make you consider if you really want to continue with such a relationship or not. Read on to find out more!

1. She tries to control your email and Facebook accounts to find out who you are interacting with

She has made you give her the passwords to your social media accounts and even your email. After you have yielded to her requests (which were meant to be used only during emergencies or when you aren’t able to access them), things became a little fishy. She keeps tabs on all your contacts and your interactions with everyone. She has also gone to the extent of posting on your behalf and unfriending some of your friends. This is a serious breach of privacy, and worse things are coming your way if you aren’t getting up and taking note already.

2. She asks a lot of mindless questions

She has a question for everything that you do or you say. There are questions day in and day out, and none of your answers to them seem to satisfy her. Some of the questions are highly irrational and few of them are even utterly ridiculous. In fact, sometimes you can’t believe your ears at what she asked. If this is the case, then the girl you are dating is definitely a psycho girl and you need to get away right now!

3. She has some absolutely unreasonable and unbelievable future plans

Remember Kate Hudson’s character from the movie How to Lose A Guy in 10 days? She actually photo-shopped her and her partner’s photos to make a photo album of how their kids would look like in the future! Now that is some future planning, I must say. If your girl also has similar unreasonable expectations from your future together, when you’ve barely started going out a month ago, then it is time you revisited your initial plans and make things clear to her.

4. She stalks you or bribes her friends to stalk you

You bumped into her in the supermarket. The next day, you again saw her at the same movie theater you were going to with your friends. And the day after that, you met her at your office bus stop! This sounds like more than just a coincidence, doesn’t it? And when it’s not her, then it’s one of her friends, whom she has probably bribed to keep a close eye on you. If she is stalking you like a psycho, than it is pretty obvious that she is one, and then the only thing you should do is run away from her.

5. Writes her name everywhere possible on your belongings or gifts

One fine day you wake up to find your bedroom wall spray-painted with your girlfriend’s name written all over it. Surprised? This might not have happened to you yet, but other things like her name engraved on the watch she gave you on your birthday or worse still, she gives you a t-shirt saying “I Love My Girlfriend,” then it is likely you are dating an extremely insecure girl. If you don’t stop it here, you might as well wake up to the spray paint surprise very soon. Don’t say I didn’t warn you!

6. She becomes hysterical when you change plans or spend time with your friends and family

The last time you cancelled a movie plan with her, all hell broke loose. You only thank God that you could save your own head from the attack. Regardless of how reasonable you are with her about the change of plans, she absolutely refuses to understand and becomes immaturely childish, seeking attention all the time. This is a sign you are with a psycho girlfriend!

7. She is extremely close to your parents and siblings, and talks with them regularly

From the tiniest bit of personal information about a family member of yours to the big decisions made by your parents, everything reaches her at jet speed. Sometimes you wonder if she has a secret agent because there are some pieces of news about your family that even you do not get! This is not a good sign, and it only makes her appear intrusive and insecure. If you don’t take control of the situation now, things are going to get far worse and you might be left with nothing but regrets.

8. Asks you to prove your love to her every now and then and make promises of a lifetime

She expects you to surprise her every day and regularly gives you tiresome tasks of proving your love to her. Some of them are pretty embarrassing and disgusting at the same time, and some of them are lifetime promises even you are not sure of making. This is after just 3 months of pursuing her in the beginning already! You still do it because you want to see her happy, but then, there are limits to everything. You have to choose whether you want to continue being tormented or walk away from it. It would be a good thing to weigh your options at this point in time.

9. Keeps staring at you every day in an uncomfortable way

Batting eyelids coquettishly, stealing glances, and blushing are very adorable things in the beginning of a relationship. But if she still stares at you all day, every day, and also in public places, then it only shows that she is very, very possessive about you and wants to keep an eye on you 24×7. My relationship advice would be to get away from this psycho girl. She might even be staring at you while you are asleep and if you happen to wake up in the middle of the night and see her doing that, God save you!

10. Always gets things done her way by emotionally blackmailing you

Yes, emotional blackmailing is her favorite tool! You cannot disagree with her about anything at all. If there is an argument, the end of it will be rivers of tears flowing across the room. She always makes you feel like it’s your fault entirely and leaves you feeling guilty in all situations. If you feel you are being manipulated every single time, then it is time to let go. Also, the presence of such a psycho girlfriend will only make your life more troublesome and unhappy.

11. She calls or texts from another number and flirts to see if you would fall for another woman

Alright, so this is something even I did when I was in college to check on my guy. But, come on, not at this age though! Besides, going overboard in anything isn’t appreciated at all. I had a friend who did this to her boyfriend, and he played along knowing full well that it was her. This became frequent until he felt it was such a waste of time and finally called off the relationship. If your girlfriend has been doing things like this, then I think it is time to call it quits.

12. She issues threats of harming herself whenever she is insecure of your future together

This is one of the extreme cases, and you should seriously pay attention to this kind of behavior. If she has threatened you with harming herself with any tool or stood at the balcony and told you she would jump from there if she cannot have her way, then this means trouble with a capital T. This is a sure sign this girlfriend of yours needs some serious counseling and professional help. You should definitely have a kind and patient chat with her and explain to her the consequences everyone might have to face because of her actions. Love can never be forced, and the sooner she understands this, the better.

Suggested read: Step by step guide on how to apologize to your girlfriend

Every person is different. Everyone behaves and reacts differently to emotions and situations. Some may be very aggressive, while others might be very calm in the same situation. The human mind is an awfully complicated place, and fully understanding it is an awfully grueling task. While it is nice to do things for someone you love, it isn’t a wise thing to stick with someone when you realize that that person is a special kind of weird. You cannot allow yourself to be taken for granted every time.

A person should be the way they want to be as long as their behavior does not traumatize another person. When things get out of hand, then it is best to let them go. It is difficult to do it for someone you love, I know, but in the long run, it will be more beneficial for you. If your girlfriend has been showing such signs, it’s time to get up and think about yourself. “One of the best feelings is finally losing your attachment to somebody who isn’t good for you.” So, heed this thought and get that toxic person out of your life. 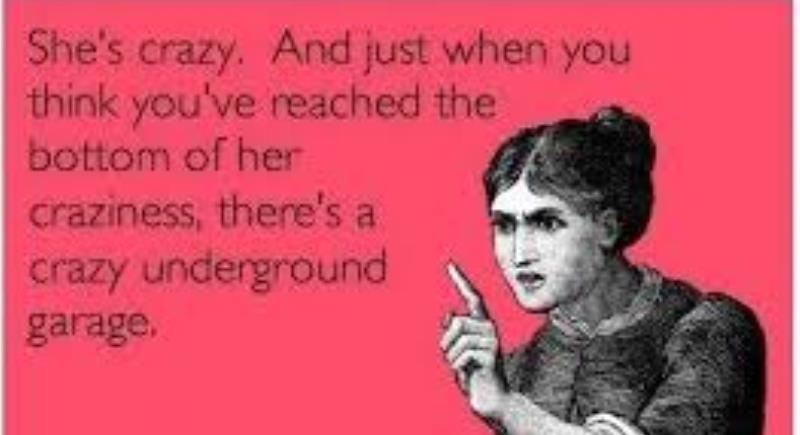 Article Name
12 Signs You Have A Psycho Girlfriend
Author
Kalloli Dutta
Description
Your girlfriend giving you very WEIRD vibes? Acting like a psycho? Beware man, you may have a psycho girlfriend! Here are the signs to be sure.

I have had an inclination towards literature and creative arts from my childhood. I have a degree in Hindustani classical music under Lucknow Bhatkhande Vidyapeeth and also learn contemporary jazz at Shiamak Davar's institute of performing arts, Hyderabad. I have been writing on and off without publishing anything ever, not taking in account the articles published in school magazines and a poem here and there. I recently started my blog as a first step towards getting my thoughts heard. I also write poems.