12 Clear Signs She Is Flirting With You # FlirtMuch

It’s true, and you know it. Most of the times, men can be pretty clueless when it comes to deciphering the silent hints and signs conveyed by women, whether consciously or sub-consciously. That’s also the primary reason for a lot of men being caught up in the very familiar, “Should I ask her out or not?” dilemma.

Now, while there are indicators that can help you identify the flirting signs, understand that it could just mean harmless, playful flirting which the woman may or may not want to pursue. Taking a sign as a sure-shot invitation might get you in some serious relationship (and might we add, legal) trouble. Equipped with that important tip, let’s dive straight into the flirt pool.

1. She can’t keep her eyes off you

Have you ever had this moment at a party or a gathering when you’re with a bunch of people but you always seem to lock eyes with that one girl? If yes, then you, my friend, are being flirted with. Eye contact is one of the strongest non-verbal cues that women use to show interest (or lack thereof) in men.

If she’s stealing glances at you every now and then, smiling if you catch her mid glance, or holding eye contact with you, take it as a clear sign that the woman is flirting with you.

Body language studies have shown that women tend to angle their bodies towards a person if they’re romantically interested in them.

If you’re out on the dreaded first date, one of the major signs a woman is flirting with you is that she is leaning in toward you. Whether it is to listen closely or to crack a private joke, a woman who’s interested in you is going to have her body angled towards you. So, the next time you notice the girl of your dreams leaning in, take note and act accordingly.

3. She keeps playing with her hair 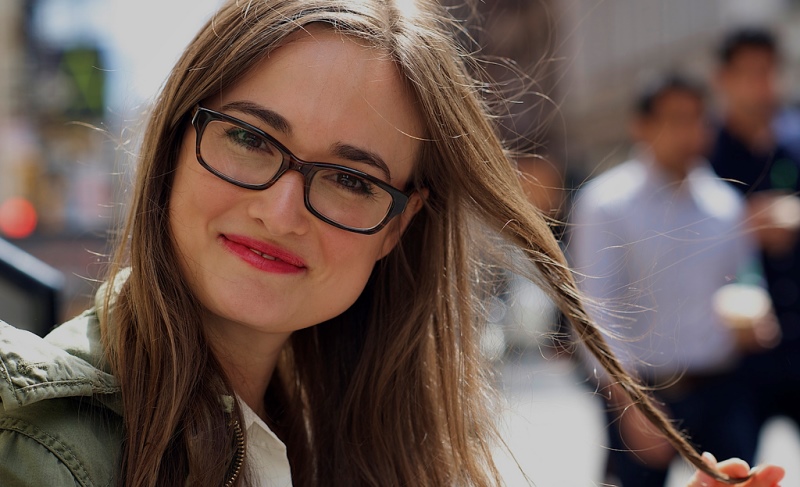 You might have heard this one before, and for good reason. When it comes to nonverbal cues, this one is quite a prominent one too. When you see a woman playing with her hair frequently in a conversation, she might just be showing you how much she’s into you.

But mind you, being bored, nervous, or fidgety in general can also explain this behavior. Try to recognize if she’s fidgety overall, or just playing with her hair in attempts of making sure that all the hair strands are in place.

4. You seem to be receiving a LOT of random text messages from her

If she’s texting you at the most random moments, she’s probably thinking of you constantly. Ever received one of those “You up?” or out of the blue “What’s up?” texts when you’re least expecting them? Chances are she can’t stop thinking about you and wants to initiate a conversation with you.

Another of the clear signs a woman is flirting with you is that she’s teasing you. Now, we don’t mean the outright mean kind of teasing. We mean the fun, playful kind where she’s being a little sassy with you.

If you notice this sign, go ahead and tease her a little to continue the fun flirting. Just one tip, though: stay above the belt. Don’t say anything outright offensive or hurtful as it might ruin the whole thing for you. Also, you run the risk of being classified as a huge jerk if you say something really upsetting without thinking it through.

6. She’s looking for ways to touch you

Physical comfort and contact means a lot to most women. If she’s looking for ways to be in physical contact with you, like touching your arm, taking your hand into hers, or stroking your hand during an intense conversation, she’s probably showing that she’s comfortable with you and trying to make you comfortable around her.

Other displays of physical attraction may include gestures like sneaking up from behind and tickling you or placing her hands on your eyes. Playful ways to get you to ease up and laughing, these are pretty sure signs she’s flirting with you.

Suggested read: 10 facts that women who hate flirting want you to know

7. She laughs at every small joke you crack, even when it’s not funny

Pay close attention to her, if she laughs whenever you crack any lame jokes. If she does, she either has an equally lame sense of humor (in which case, you have common ground to connect on) or, more likely, she’s into you. This is a clear display of the “halo effect”: you’re close to perfection according to her and she’ll laugh at anything you find funny, irrespective of how silly or dumb it might actually be.

This is also her way of letting you know that she thinks you’re funny. If you see these funny hints, take it as a compliment and go ahead with the flirting.

8. Her tone goes a notch higher while speaking to you

Most girls subconsciously increase the pitch of their voice while talking to a romantic interest in order to sound more feminine. Also, adding to this is the fact that sexual tension often causes people’s voices to change. So the next time you notice her voice being unusually high or different, take it as a green signal and keep doing what you’re doing. It clearly seems to be working for you.

9. She’s looking for the weirdest excuses to talk to you

From computer related problems to buying the perfect gift for her brother, if she’s looking for any excuse to talk to you or take suggestions from you, she’s looking for ways to talk to you while making sure that know how much your suggestions mean to her. It also signifies that she values your opinions and insights on things and wants to include them in her decisions. A big step is ahead for you, we must say.

10. She’s liking that profile picture you put up years ago

Online networking has made almost everything easier, including recognizing the signs a woman is flirting with you. If your notifications tell you that your love interest has liked your profile pictures from two or three years ago, you can be quite certain that she’s interested too. While it can also be taken as a form of stalking, most of the times it’s just the woman trying to know everything she can about you, while letting you know so that the bond between you two strengthens.

11. She’s got that one nickname for you

Take the hint and maybe give her a nickname as well. Don’t go overboard with the cheesiness though. You might just put her off.

Just like the teasing, cute fighting over small things is also her testing the waters with you. Notice how the fights always end up making you feel closer to the person? Well, there’s a reason for that. Most of the cute, small fights either end up making one (or both) of you laugh or discovering more about each other, both of which are crucial for a woman to bond with her partner.

The next time she makes the cute pout while fighting with you for not bringing her the flowers, just be a sport, play along and you shall soon be rewarded with displays of affection from her end.

While we’ve clearly mentioned the signs a woman is flirting with you, you might not want to consider them in isolation. If a woman is displaying just one or two of the mentioned hints, it might just be that she’s being polite and friendly. However, watch out for all or most of them as that usually means that her flirt game is strong and she wants you to join in the fun.

Also, do not, we repeat, do NOT use any of these signals as a counter argument if it does not work out between the two of you. A lot of these hints are subconscious and not out of the relationship advice for men rulebook. Respect her decision and listen to the verbal (if, in case there happens to be one) instead of the subliminal yes.

Reading signs of a woman flirting with you is not a clear science but more of an acquired learning process. If you know the woman really well, you’ll be able to read the signs better. If not, then just follow the guide and you probably will be good to go. Happy flirting!