12 Things Only Women Dating Engineers Will Get

Dating engineers is like coding, requires to be reinforced with precise data to make it on target.

If you have started talking like that, you too are dating an engineer like moi! However, the struggle doesn’t end there, my friend; the ‘drive’ has just begun!

1. You have stopped complaining about your classes because every time you open your mouth to rant, he smirks!

And his sneers are legit! You have tried wrapping your head around his syllabus but in vain, since that was more than likely engineered by Satan!

2. Your patience level is on an all-time high as you can never rush him into doing anything when he’s “working on something important”!

3. His parents constantly remind you about the fact that their son is an engineer!

And your parents too. That’s the reason they are letting you both go around. Only that!

4. Amidst all this chaos, he is also preparing for CAT, because what’s an engineering degree without an MBA to go with it!

And here you are trying to decide which cold drink goes best with your Smirnoff!

5. If he is hanging out with friends after midnight, they are probably (with conviction!) engaged in some group studies or playing Call of Duty in their PJs!

No insecurities, bra! He isn’t doing any hanky-panky, and who would know that better than you! 😉

So you up the challenge with MoFos and 69s and AMOGS and AFCs!

By the way, the last time you asked him for a 010, he thought it was a computer code joke and chuckled before going back to his studies.

Suggested read: 8 immature habits men should leave behind before turning 30

7. He is only a step away from preparing an excel spreadsheet even when it comes to picking the right restaurant or hailing an Uber for the perfect date!

Technology is his poison! So nothing shall be left to fate and not methodically researched, with this nerd!

8. A leaky tap or something wrong with your oven, never let that reach his ears coz the next thing you know is he is trying to fix it!

And he will take 3 days to do it when you could just call Raju Bhaiyya and get it done for 30 rupees and more importantly, in 30 minutes. But he won’t let that happen! Also, your thing won’t get fixed but he’ll convince you into believing that it is better than it was when new. After all, that’s how these guys pass their project presentations!

9. He will only get you gadgets as gifts, because why not?!

Most of them will be crap, with a manual that sounds Greek to you. So since you don’t (read: Can’t!) use them, he does you the favor of using them for you. How cute!

10. Gibberish tech-y talk that he delivers to sweep you of your feet!

If giddy is what you intended, then you are successful, my friend!

11. His organizational skills are Jedi-inspired!

He has a rack dedicated to everything. The CDs are arranged alphabetically, the magazines according to their heights, the encyclopedias depending on their thickness blah! Blah! Blah! He’s OCD sometimes gets the better of him, since he can’t concentrate when something that’s not supposed to be somewhere, sits there comfortably. More than often, that thing is you!

12. Yes, you are dating a perfectionist!

And that’s true because how would he have ended up with you, in the first place. No, no, now you can’t blame it on fate, Mr. Rational Everything-Happens-For-A-Reason fella! Back at ya!

Enjoy reading the articles we weave for you? If yes, subscribe to our newsletter today to get your share of fun and LOLs mailed to your inbox every day! ☺ 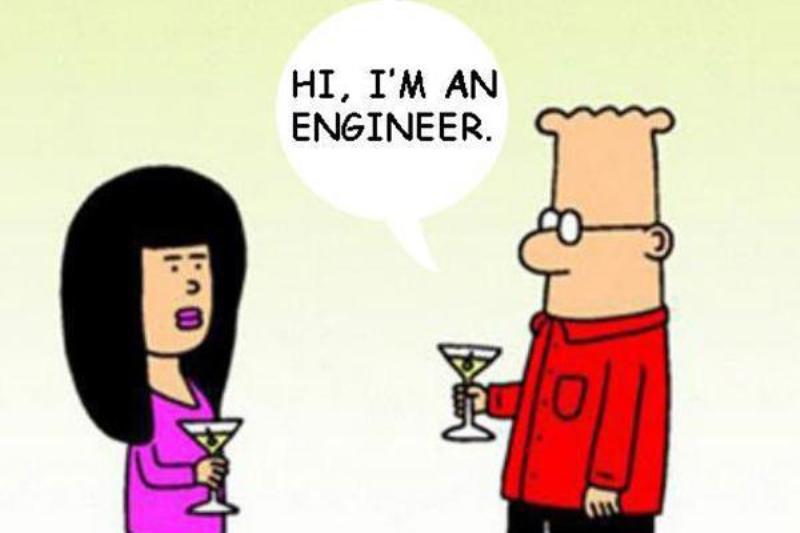 Article Name
12 Things Only Women Dating Engineers Will Get
Author
Riya Roy
Description
Dating engineers could pretty much be like a class in thermodynamics. You wouldn't know what happened and why!