Women In Leadership Roles Who Have Carved A Niche For Themselves

“The difference between successful people and others is how long they spend time feeling sorry for themselves.” – Barbara Corcoran

Here are the women who didn’t waste time feeling sorry for themselves, but pulled up their socks and got to work! 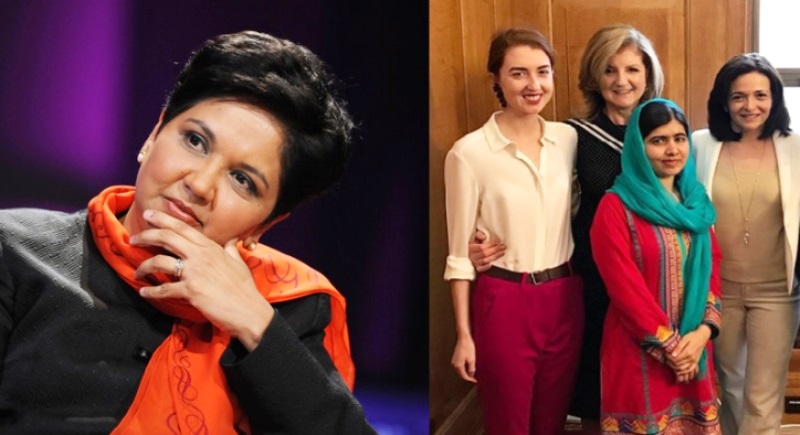 Women In Leadership Roles Who Have Carved A Niche For Themselves

Sheryl Sandberg is definitely one of the most powerful women in the world. If you have been living under a rock, you should know, Sandberg is the Chief Operating Officer of Facebook. She is obviously a billionaire! This woman is a major role model for women around the globe. She has been very vocal in calling on businesses to put an end to the gender pay gap. She has long appealed to corporations to promote women to senior positions. She has worked at McKinsey & Co., Google and now serves as the COO of Facebook, the world’s top social media channel.

Her message to people (especially women who are told they cannot have a professional and personal life!) who want to make the possible happen: Have a long-term dream, but achieve it through short-term plans.

The CEO of Pepsi Co., Indra Nooyi has been with the company for over 20 years. She has been the CEO for more than a decade now. She has had a very successful tenure so far. She has helped Pepsi acquire Tropicana, Gatorade, and Quaker Oats and I am sure you know that these were major brands themselves.

But how did this powerhouse of a woman become the top executive at Pepsi, which is one of the world’s largest companies. According to Nooyi, the key is that you should never stop learning. The strongest leader is one who is a student all her/his life.

Chanda Kochhar, the managing director and chief executive officer of ICICI Bank, is a prominent face in the country for shaping the retail banking system in India.

When asked about whether she always had a big dream and knew where her life was leading her, she said,

“I always believe that, as you start out, while you should have a big dream – a big goal – but it’s also important to move step by step. So, you know, frankly, if you ask me, when I started as a management trainee in 1984, I don’t know that I really thought that I would become the CEO.”

Born in 1964 in Dallas, Texas, Melinda Gates started her career at Microsoft Corporation in the late 1980s. She was the product manager at what was then a rising company of multimedia and interactive products. She then fell in love, and got married to Bill Gates, who we know is the richest man in the world. Today, she is the co-chair of Bill & Melinda Gates Foundation that focuses and works to improve global health and education.

The current CEO and president of Yahoo, Marissa Ann Mayer, had to find a spot at our list that salutes and congratulates women in leadership roles. She was offered 14 jobs, one of which was at McKinsey & Company. She was also offered a teaching job at the prestigious Carnegie Mellon University. In 1999, Mayer worked at Google as its first female engineer, but today she is the head of another technology giant.

The first woman to head the IMF, Lagarde, could not be missed out, right? She took over the International Monetary Fund when it was in a debt crisis; however, so good was her tenure that she has been reappointed! Lagarde is a former corporate lawyer, and also served as the first female finance minister of France.

CEO and Chairman of General Motors, Mary Barra, is quite an influential woman. She became the first woman to head GM, which is the country’s largest auto company, when it was struggling because of scandals and tripping sales. She oversaw the resurgence of the company, when its earning doubled in the year 2014-15, and 2015-16, and therefore, is often called Detroit’s Comeback Queen. Barra, in an interview to Refinery29 said something that will serve as a great piece of advice for women trying to make a niche for themselves:

“Wherever you are in your career — your first position, or a manager, or even an executive — you have to be ready to stand up for yourself. But, it should be done in a firm but respectful way. Always remember, respect is earned. Learning to read the situation is also important. Most of all, never waver on integrity. If someone calls you bossy because you didn’t let them push you around, so be it.”

The Head of HP since 2011, Meg Whitman, is a staunch advocate of the rights of working women. Whitman, early in her career at Procter & Gamble, question the company culture that didn’t allow women to travel alone for business or even get a corporate credit card. She shook the company!

Here’s her advice to women who have the “impostor syndrome”:

“Remember that you can do anything you want to do. Don’t let anyone say, ‘You’re not smart enough… it’s too hard… it’s a dumb idea…no one has done that before…girls don’t do that.’ My mom gave me that advice in 1973. And it allowed me to never worry about what others were saying about my career direction.”

Angela Merkel is the chancellor of Germany since 2005, and is also the leader of CDU or the Christian Democratic Union.

Merkel completed her doctorate in physical chemistry, and entered politics in 1989, which was the wake of the revolution in Germany.  Today, she is the walled fortress of the country!  In 2015, she was named ‘Person of the Year’ by TIME magazine.

Theresa May was elected Britain’s second woman prime minister after Cameron’s resignation on the 13th of July after the Britons voted to detach from the European Union.

May was the interior minister since 2010, and had campaigned for remaining in the EU. It is quite natural that hers will be a difficult reign as she has to negotiate the delicate divorce of Britain from the EU, and the situation thereafter.

Hillary Clinton, former US First lady, and secretary of state under the former POTUS, Barrack Obama, was also the first woman to win a major party’s nomination, last year, in the election to the White House. This definitely wins her a ticket to this list!

This woman is an inspiration in defiance. A Nobel Peace Prize laureate, she is a democratic icon in Myanmar. She is an avid human rights’ activist, struggling to bring in democracy into her country. This dream of hers almost came true in 1990 when she won the national election; however, the government refused to transfer power. The corrupt legal system of Myanmar declared a house arrest on her, which she had to endure for more than 2 decades.

According to San Suu Kyi,

“The education and empowerment of women throughout the world cannot fail to result in a more caring, tolerant, just and peaceful life for all.”

Arianna Huffington, business woman, syndicated columnist, co-founder and former editor-in-chief of The Huffington Post, will make for an excellent role model for your kids. A Greek American author, Huffington, in 2003 ran as an independent candidate for Governor in the California recall election. Though she didn’t win, in 2009, she became no. 12 on Forbes’s first list of Most Influential Women In Media. Last year, she declared that she would step down from her role at The Huffington Post to work on her new startup, that focusses on health and wellness information.

The first woman CEO of IBM, Ginni Rometty started her career almost thirty years ago as a systems engineer. She later became the vice president of IBM, and then, took over as the CEO of the company.

Here’s some advice from her to young women starting their careers. She says,

“Be comfortable with the fact that growth and comfort don’t co-exist. I always say, you know, if I sit here and close my eyes and say, when did I learn the most in my life, in my career? It’ll always be when I close them and everything I think of is when I took a risk. It’s when I think I learned the most.”

You need to take risks, if you want to grow.

Suggested read: 15 Good Books That Are A Must-read For Women Entrepreneurs

That is all we have on today’s post on 14 Women In Leadership Roles Who Have Carved A Niche For Themselves. It goes without saying that this isn’t an exhaustive list. We want you to add to it. Please use the comment section to share the names of female leaders who you think are inspirational.

Was this helpful? Will you be recommending it to others too? Do let us know.