15 Hollywood Celebrities And Their Love For Their Pets

For many of us, pets are a big source of love and companionship – sometimes even more so than being in a relationship! 😉 So, quite naturally, there are many celebs who share an amazing bond with their four-legged friends! The celebrity pets are just as famous as their ‘parents’ (that is what they like being called!), the Internet is flooded with their pictures, some of them have or are about to make their movie debut, a few are even heirs to their celeb’s property!! Ahem, wish I could bark or meow!! 😉 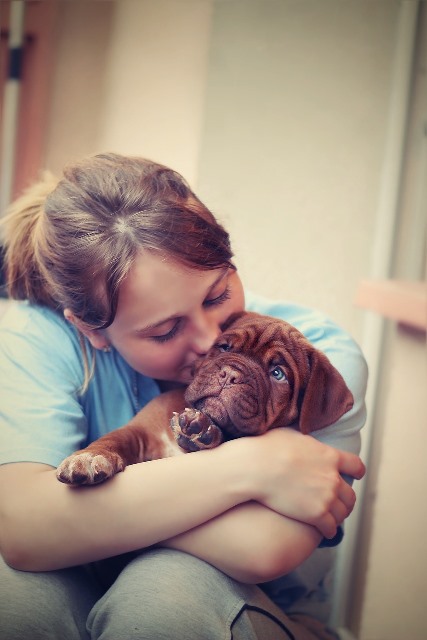 A study conducted by Cambridge University has shown that having a pet produces improvements in health in just one month! Well, I don’t need a study to tell me this. How can any medicine be better than a pet licking your face?! Just stroking your fingers through its fur and simply watching it jump around (or float if you are an aqua person!), can help you chill. It not only reduces your heart rate but also lowers the blood pressure.

Did you know your pet can even keep heart attacks at bay?!

Apart from physical health, psychologists also suggest that a pet teaches your child to be less self-centred (so important in today’s world!). Pets have also been labelled as a social lubricant! Attending those dog trainings, visiting the vet or even walking your pet in the park gives you opportunities to bump into known and to-be-known people. Breaking the ice becomes way easier! And who knows, you might just bump into one of the celebrities we are going to talk about, and soon your pets are in love and you become in-laws??? Too cheesy, I know. Anyway, read on to feel the love these celebs feel for their celebrity pets!

Suggested read: 15 movies that will make you want to cuddle up with your pet 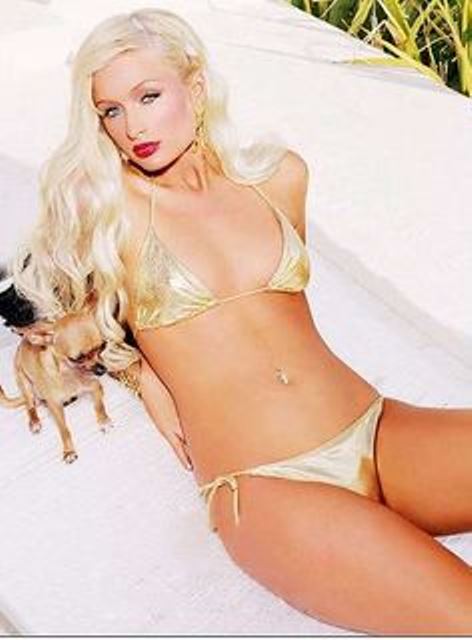 “I take my dog Tinkerbell seriously. I take my job seriously. But I don’t take myself all that seriously.” – Paris Hilton

When Paris’ famous chihuahua, Tinkerbell, passed away earlier this year, she was devasted by her loss. The socialite announced the news to her Instagram followers (a number around 4 million!) through an emoji filled post saying, “My heart is broken. I am so sad and devastated.” She added further, “After 14 amazing years together, my baby Tinkerbell has passed away of old age. I feel like I’ve lost a member of my family. She was such a special and incredible soul. We went through so much together. I can’t believe she’s gone. I will miss her and think about her for the rest of my life. I love you Tinky, you are a Legend & will never be forgotten. #RIPTinkerbell.”

From the photos of Tinky’s adventures with Paris, it is quite clear that she lived a glamorous life! 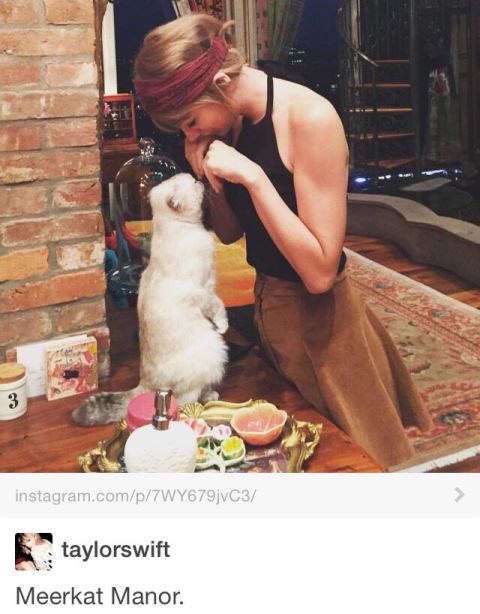 Taylor Swift’s cat, Meredith Swift (the ‘beast’ of all celebrity cat names), is all over Tumblr! If you did not know, Meredith was accused of attacking Taylor’s dress last year.

She tweeted (Taylor, of course!): “That moment when your cat casually walks up, then abruptly ATTACKS your custom satin Oscar de la Renta gown during your fitting for Met Ball.” It appears that Meredith entered the dress to make herself a little home! Taylor further explains, “She just passed, dug her claws in, and started to roll … like when you see a crocodile attack an antelope on National Geographic. That’s what she tried to do to the dress.” C’mon, Taylor, what is a relationship without a little feud and a breakup song (if need be) eh?! 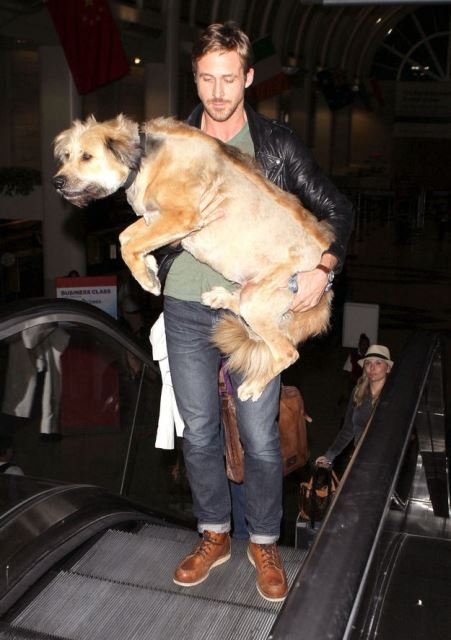 “The greatest love of my life,” said Ryan Gosling of his pet.

Or should we call him Ryan ‘Guzzling’?! 😉 While filming The Nice Guys, the actor reportedly checked on his pup (first thing’s first!) during his break. He was then seen helping the 13-year-old mixed breed guzzle some water from his bottle and then chilled under a tree afterwards! Also, in the picture, look at him carry his pup up the escalator! The Notebook star knows all about true love! On a list about celebrity pets that are as famous as their owners, we could never leave out The Hangover star and his pets Charlotte and Samson. While Charlotte is a rescued chow-retriever, Samson, who has since passed away, was a short hair Pointer. Apparently, Bradley has one large portrait of the late pooch in his apartment! Aww. 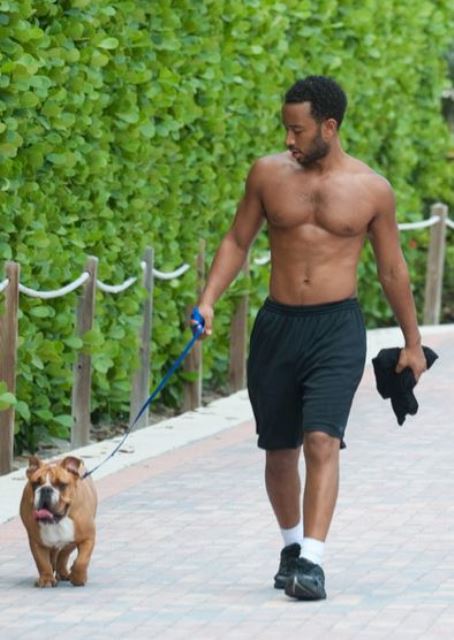 Now this one is a love ‘tail’! John Legend got his pet pooches Puddy (in the picture) and Pippa wedded (joining paws in holy matrimony!) to promote a charity! John Legend’s a real legend!

Watch the video of the wedding of the celebrity pets! 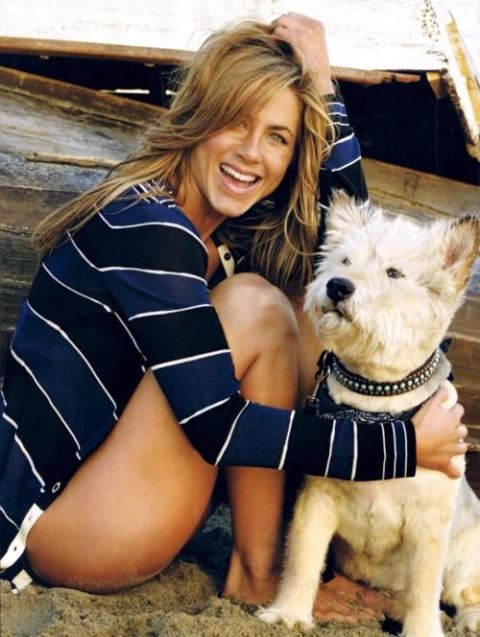 Jennifer Aniston’s dog was called Norman and she has a tattoo as a tribute to him. Norman, (don’t you think celebrity dog names are pretty cool?!) before passing away at 15 years of age, would accompany Aniston to film studios and even to Friends set. She has even been recorded as saying, “Norman goes with me on location – I’ve got to take Norman. He’s my baby boy.” 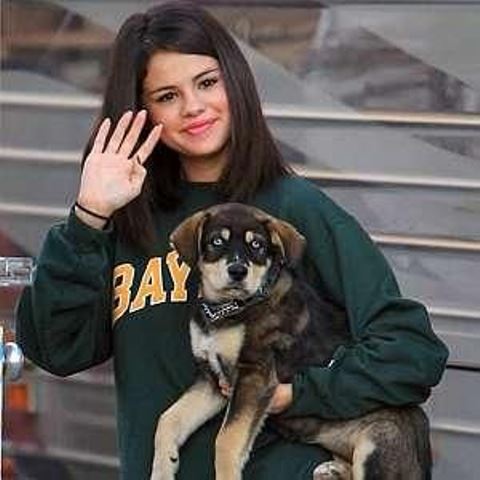 Selena Gomez adopted the adorable Bailor when in a relationship with Justin Bieber. He was taken in from a rescue center in Winnipeg. Selena Gomez has five rescued dogs from different places. While some were taken in from a shelter, some were from the parking lot, and one was from a movie shoot in Puerto Rico.

She has spoken of her childhood experiences and about being raised to adopt. She says, “In Texas, where we’re from, there are a lot of dogs that need homes. It just never made sense to any of us not to get a shelter dog, since there are so many that need homes.”

Suggested read: 20 pet quotes that will make you feel grateful for your pet 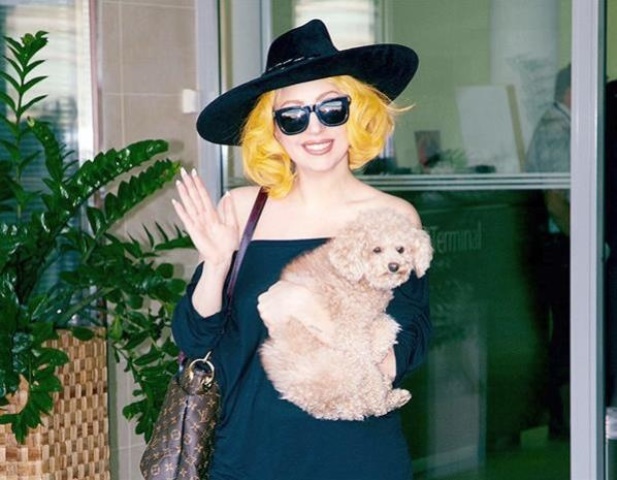 Lady Gaga’s little monster is a poodle-cross breed named Fozzi! This is a picture of them arriving at the Vienna airport in 2012. Her pictures with her pet show that Fozzi is always accessorized with matching collars and even necklaces on certain occasions. Lucky Fozzi! 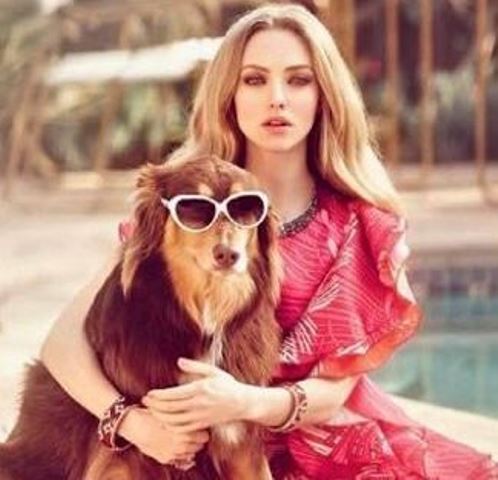 “I love animals, but there is no animal has the same kind of place in my heart like Finn does.” – Amanda Seyfried

The reason behind this love? Well, Finn is her first dog and, in Amanda’s words, “He cuddles with me and he listens to me and he loves me and he looks at me all the time. Come on, like, people don’t praise you like that.”

If you didn’t know, Finn’s got a movie role too. What a stud, I must say! 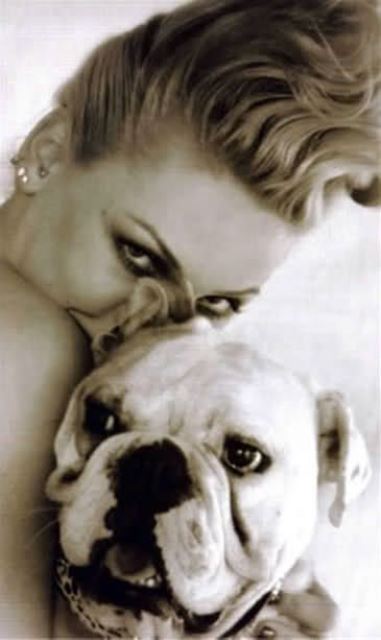 Late Elvis not only had one of the coolest of all celebrity dog names, but also a super-hot owner, the singer Pink. He was a gift to her from Lisa Marie Presley, which explains his name! 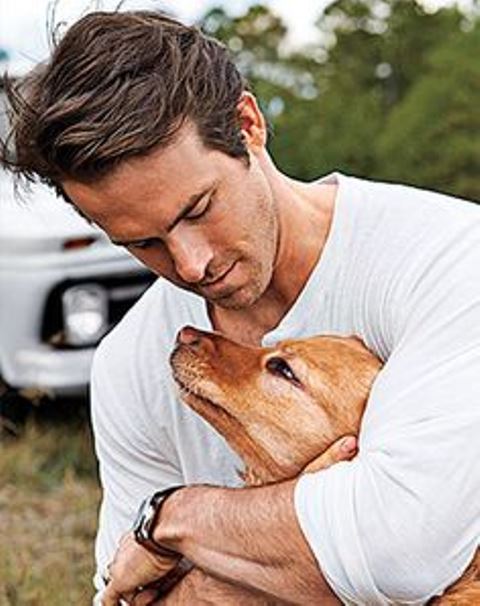 Baxter is Reynolds’ adopted Golden Retriever from an animal shelter in Houston. Blake Lively is no doubt smitten by her hubby but also adores Baxter as well!

“It was like a very brief rom-com: boy walks dog, boy loses dog, boy makes public declaration of love, sincere music swells, and off we go into the wild blue yonder,” says Ryan Reynolds, summing up their love story, Baxter and his, I mean! 😉 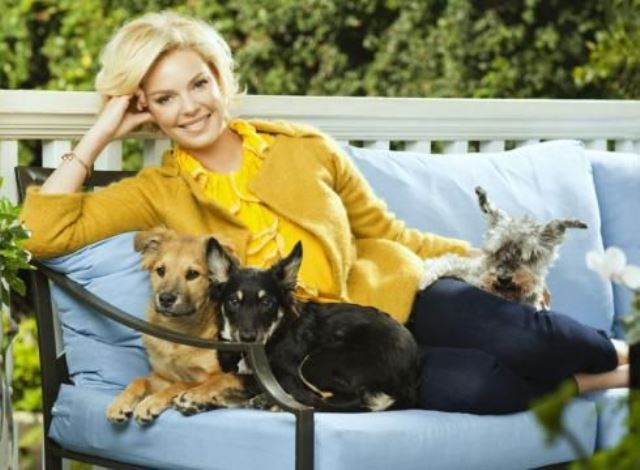 Isn’t it all mixed ‘pup’? 😉 Heigl has 35 pets, and three of them are in this picture with her: Tambour, Flora, and Romeo.

“I’ve always loved, respected, and cared deeply for animals. Our family always had animals, and I was born into a household of two dogs and two cats,” says the star who also has a rescue shelter for animals named ‘Heigl Hounds of Hope.’ Inspirational! 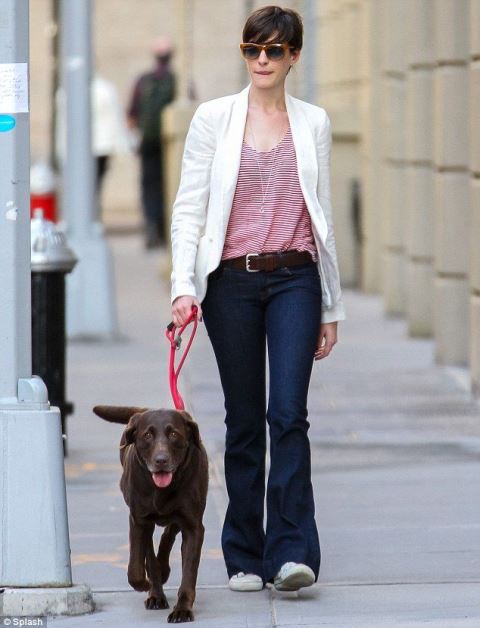 That is the Oscar-winning actress walking her precious Esmeralda around. “I am totally wrapped around her finger,” Hathaway told Newsweek. She fought for custody of her chocolate labrador when her former boyfriend Raffaello Follieri was imprisoned for fraud. 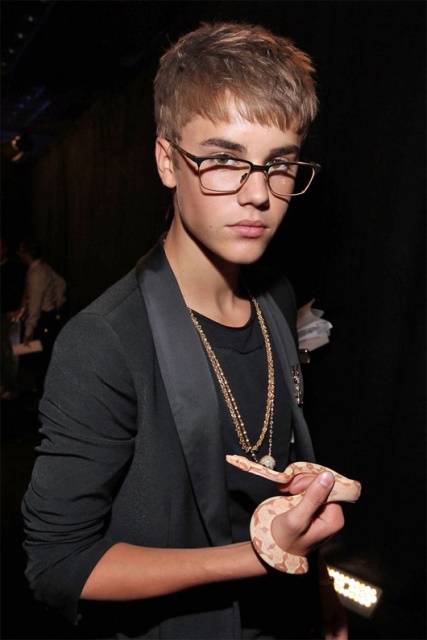 Bieber’s albino boa constrictor, Johnson, was auctioned off for charity after the 2011 MTV Video Music Awards. It now lives in Owatonna, Minnesota. Though he does not have an amazing history with pets, we thought he should make it to the list for his uncommon choice of pet!

Suggested read: 15 practical reasons why pets are better than boyfriends 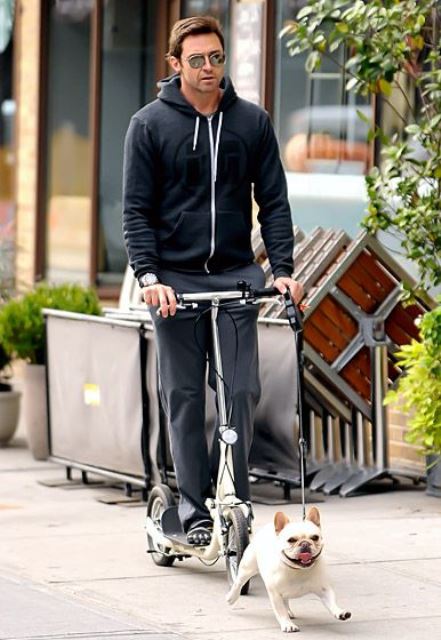 He may be the Wolverine, but he feels way ‘less’ miserable when he’s with his bulldog, Dali. The actor’s son named the pet after the famous artist Salvador Dali. The indulged pooch travels all over the world with the family and has even flown first class to Canada!

Maybe being a pet lover is a prerequisite to becoming a celebrity? I feel that celebrities are smart enough to understand the wonderful benefits of owning and caring for a pet. Do you have a pet? What’s its name? Any funny incident or video you would like to share? Drop it down in the comments section below! Love and be loved. 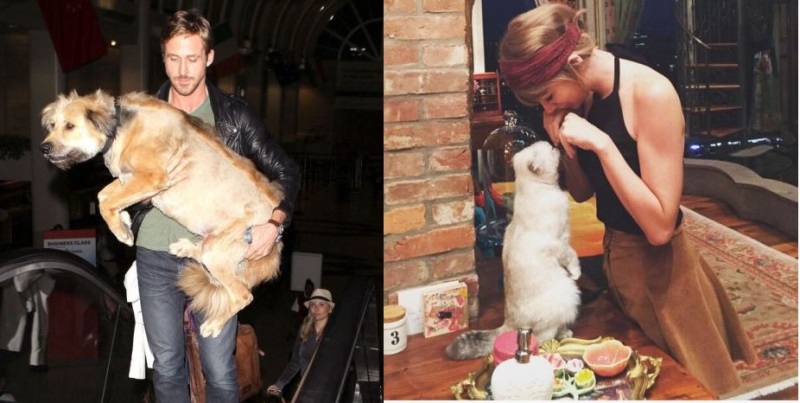