“’Unicorn Island’ is the synonym for my happy place. It’s a really beautiful message: that happiness is one of the hardest things you’ll ever fight for, but it’s the only thing worth fighting for.”

Lilly Singh aka Superwoman started her YouTube channel in October 2010, with her first video garnering 70 views. Currently standing at 1.7 billion views, and 11 million subscribers, she is a force to reckon with. Her fan base is called Team Super, and they’re all Unicorns. Singh started making YouTube videos as an avenue to counter depression, and is now iconic as one of the greatest forces of positivity. Her initiative #GirlLove has found support even from the former US First Lady, Michelle Obama. #GirlLove seeks to end girl-on-girl hate and find true moral support. IISuperwomanII has touched and changed lives appreciably. 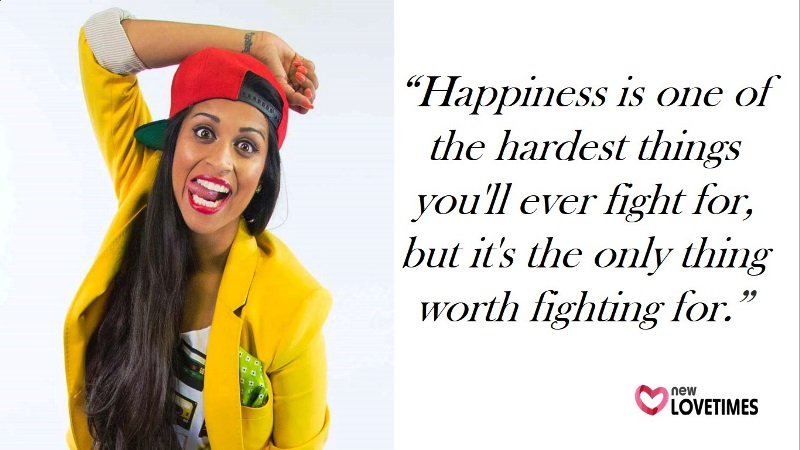 Here are 15 Lilly Singh quotes to awaken the Bawse in you:

Suggested read: 12 awesome quotes by Brene Brown that will push you to live your life to the fullest

1. “There is no shame in falling down but there is pride in getting back up.” 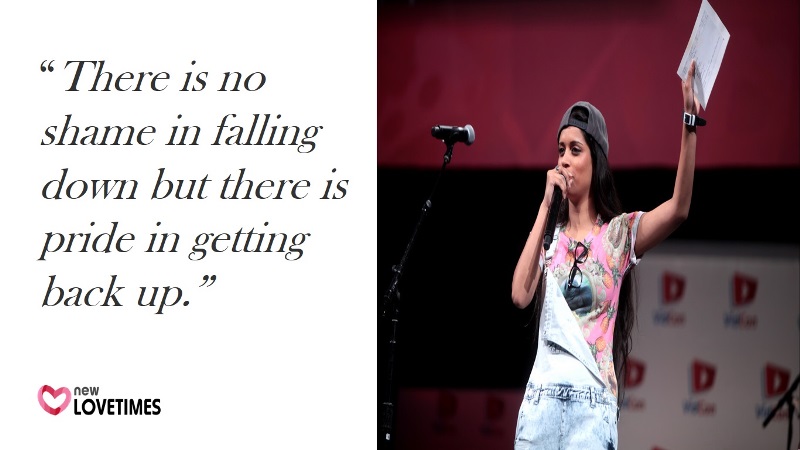 By virtue of being a human being, you aren’t perfect. But I could swear 7 ways to hells that you are god damn beautiful.

We make mistakes, and sometimes over and over again. We question our potential every time we fail, but consider this, if the night did not exist, then would we really appreciate the day? Every success story has a massive failure hidden somewhere in it. ‘Harry Potter and the Philosopher’s Stone’ was born in Edinburgh cafes while Rowling and her daughter survived off benefits. The first publisher to turn down Harry Potter, also brutally rejected her Robert Galbraith venture and Rowling ended up tweeting, “They don’t even want me in a beard.” 12 rejections later, Harry Potter was taken up by Bloomsbury, and the rest is history.

Your failures make you. We all fall down hard, and scrape our knees multiple times in the process, but what makes us successful is the strength to rise back up. Like Alfred said, “Why do we fall? So we can learn to pick ourselves up.” Never give in.

2. “I would never want to change myself to be someone I’m not.” Too many of us are striving to be something we are not, just because the majority swings that way. We try our best to find into every skin but our own. A survey conducted by the Daily Mail revealed that “the number of 14 to 15-year-old girls skipping breakfast rose from 24 per cent in 1984 to 41 per cent in 2001”. There was a time when people skipped meals because of the lack of food, but that’s no longer the case. Scores of children refuse the resources because society has somehow ascertained ‘thin is beautiful’. I pity the school of thought that requires you to be anything that you are not. Why fit in, when you can stand out in all your glory? You do you.

3. “If I could give advice to anyone, it would be that sometimes the best way you can fight a problem – and this is going to be a little bit controversial – is to not address it.” 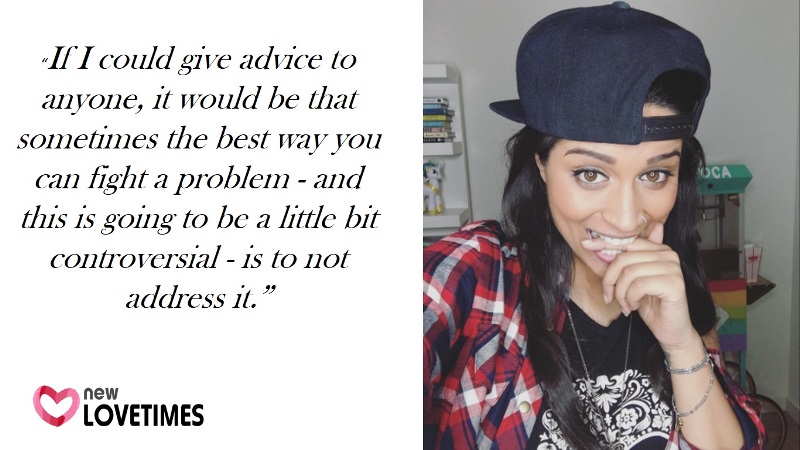 This message could not have come at a better time. In an age of internet trolls, it takes half a nanosecond for criticism to surface on your newsfeed. Hatred is a powerful force, and it affects us too easily. I am not propagating silence, but blatant disregard for anybody who does not respect you. Their hatred does not deserve your attention, let alone your reply.

4. “I think the best way I could ever fight racism is just being as successful as possible.” 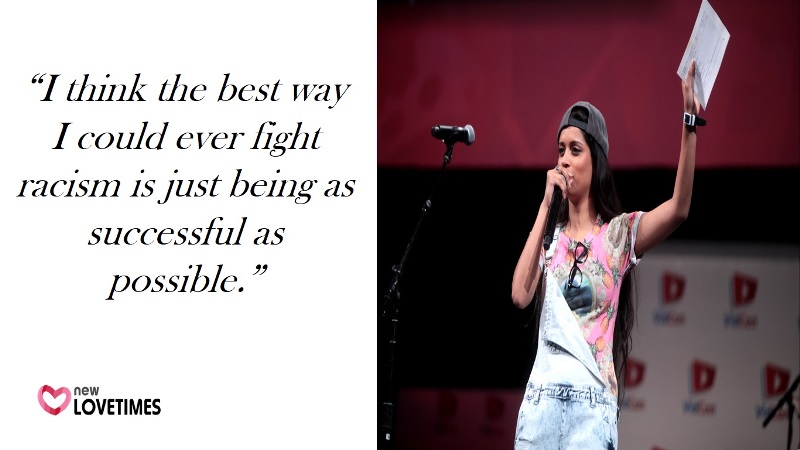 Lilly Singh, a brown woman in an otherwise white-dominated world, knows what she’s talking about. Do not let somebody else’s prejudice, stand in your way. The best way to counter toxicity directed at you is to rise above it. Work hard, and carve out your own place, while the seemingly ‘high-brow’ spend all their time spewing baseless hatred. There will always be people trying to pull you down, but make sure you don’t have time for any of that. 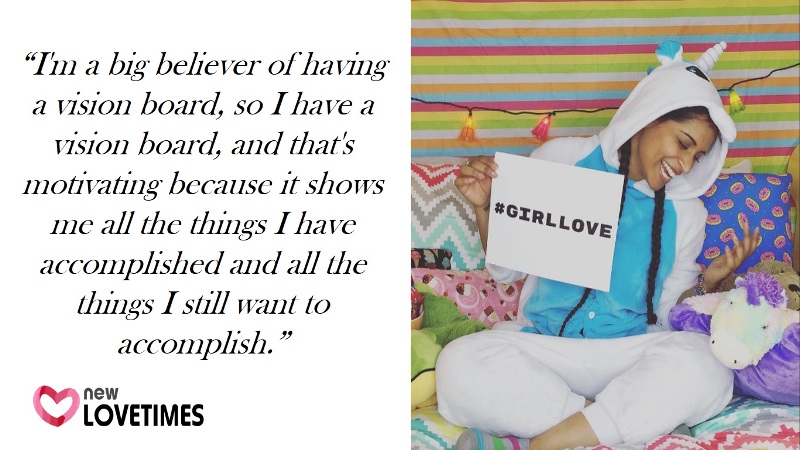 One of the best things Lilly has introduced us to, is the ‘vision board’ concept. She had a large board laid on the top of her bed frame, filled with all the things she wanted to achieve in life. Whenever she lay down, her goals would stare down at her, and that way, every waking second of her day, she never forgot what she was aiming for. Once, she woke up with a start because her vision board fell on her face, and she tweeted: “I was literally hit by my dreams and forced to get up.”  It constantly reminded her to work harder and harder still. The Superwoman, as she is rightfully called, had 100,000 subscribers as her goal, and now sits comfortably at 11 million subscribers. In September 2016, Lilly went to Kenya to help young girls go to school. She introduced the ‘#GirlLove Rafiki Bracelet’, her first ever accessory piece that would help generate revenue to send the children to school. Her goal was to sell 1,500 rafikis, and she went to the extent of asking her fans to purchase that as her birthday gift, even though she didn’t accept any profit margin. The count stands at 32,721 at present with the Unicorns ganging up to make a difference in the world. Like Lilly says, no problem is too big to fix, if you are determined.

Suggested read: 15 quotes by Chimamanda Ngozi Adichie that will inspire every feminist to take the movement forward

7. “True strength is loving yourself enough to create a positive environment for yourself. It means being brave enough to let go of the people and things that take away from your calmness and happiness.” 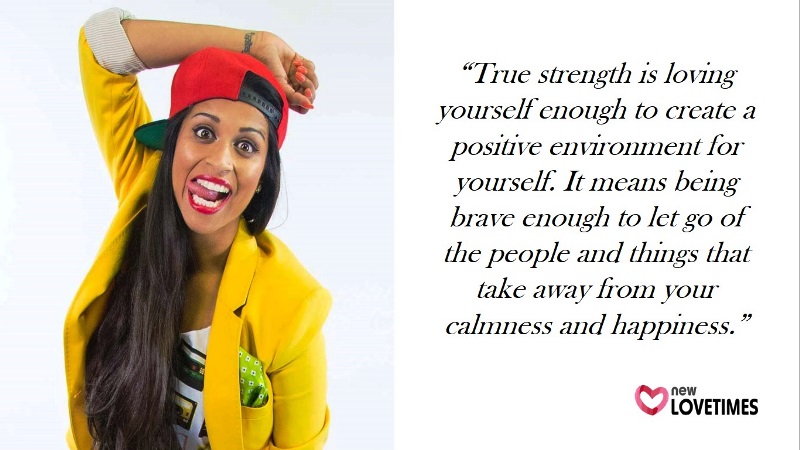 I cannot stress this enough. You are your number one priority, and you should learn to give yourself all the love you’ve been waiting to find. Singh is a huge advocate of “good vibes”. Surrounding yourself with positivity is an essential tool for leading a peaceful life. Often we don’t realize what triggers the downward spiral in our mental health, but 8/10 times, the answer lies in our surroundings. What we dwell in, influences us greatly. So, be careful about what moulds you.

8. “You’re a human and you’re allowed to feel things. There’s no shame in that.” Our society attaches a lot of unnecessary stigma to being emotional. Tear drops are a rather shallow way of measuring strength. Our emotions make us human, and there is nothing wrong in showing the world that you have a heart that beats. If anything, it makes you compassionate, and in an era torn by mind-wars, I don’t know why you would want to let that go.

9. “In the game of life, you have many choices. You can let failure weaken your determination, negativity change your perspective and obstacles break your stride. Or you can learn from your mistakes, create a shatterproof lens through which you view life and discover the weak spot of every mountain that lays ahead of you. It’s your game. How are you going to play it?” You choose how to live your life, so why not live it the best you can?

10. “When you’re in an argument, it’s so easy to understand why you’re angry. You can reflect back on all your past experiences and everything you feel and sympathize with yourself. Your stupid ex! Your messed up childhood! That one time that mean bouncer wouldn’t let you into the club! What’s hard though, is to recognize that the “annoying, fake, hot-headed” person you’re dealing with probably also has reasons for being that way.” 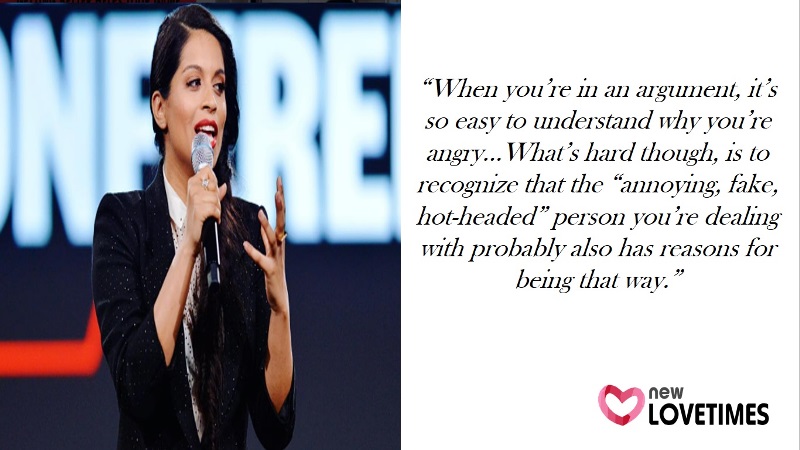 In the scapegoat culture, we’re too busy taking sides in a war. In newsrooms, everyday, I watch candidates drown out each other’s voice in their struggle to find their own. As life sweeps us off our feet, throwing us head-first into a pool of stress, we never really stop to think about anybody but ourselves. There are several sides to every war, and if we let our opponents tell their stories too, most of this crossfire would end in truce.

11. “Whether you’re just starting your climb up the ladder of success or you’re already high up, the need to be consistent is crucial. It’s not enough to be determined for a portion of the climb. That’s like reliving a terrible relationship. You know the one where your partner bought you flowers and was patient for the first 2 months and then at the four-month mark, they went through your texts and keyed your car? Yeah. Don’t have that relationship with success. Consistency is the best representation of who you are as a person, not the one or two times you tried really hard, so consistently be a Bawse.” 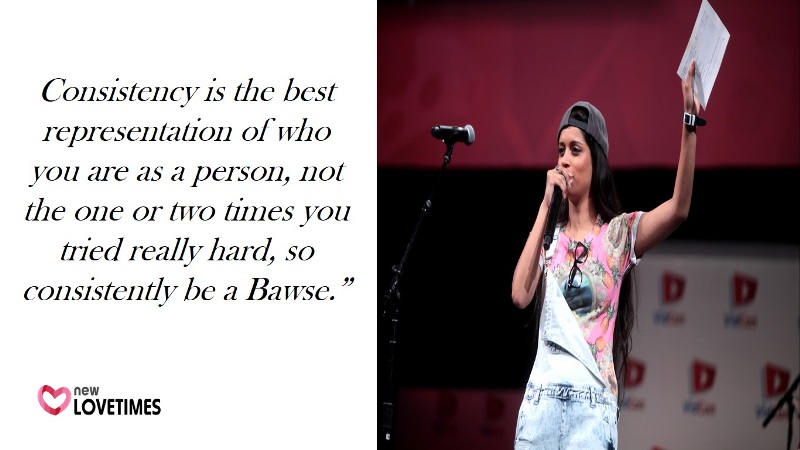 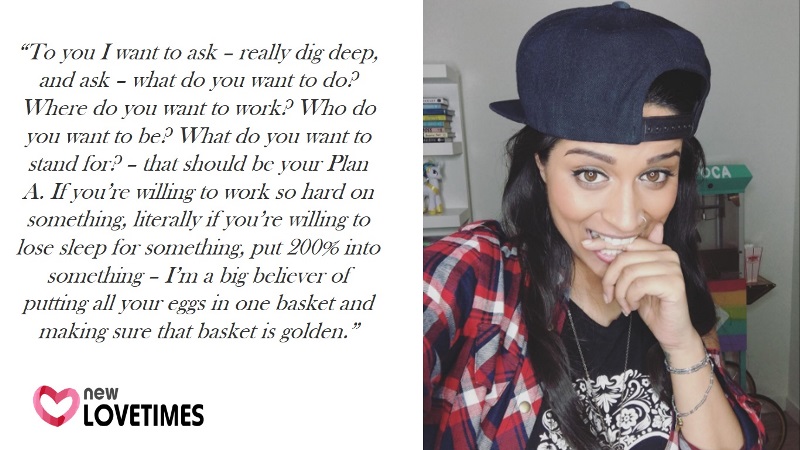 At the MAKERS’ 2017 Conference, Singh spoke about the redundancy of a Plan B. She said that it’s crucial to give your all to the dream, with no back-up, no scope of self-doubt, treating your choice as a guarantee. It’s only when you obliterate the option of failing that you succeed.

13. “If you say, ‘I don’t want to offend anyone,’ then don’t get on stage. Just ask yourself, ‘Do I think it is right? Do I think it is offensive? And do I think that everyone is okay to hear this? If I truly believe this, then I should go and do this.’” There will always be somebody you will offend, no matter what you do. You could have devised the cure to cancer and still be criticized because the medicine isn’t the right color. Malala was shot because she demanded something as basic as education for girls.

Don’t let the fear of offending others stifle your voice.

14. “When I started out the videos, I was dealing with depression, and I wanted to make inspiring videos for others, which would end up inspiring me in turn. I wanted to show the world that it was possible to make a positive switch in life and start over.” 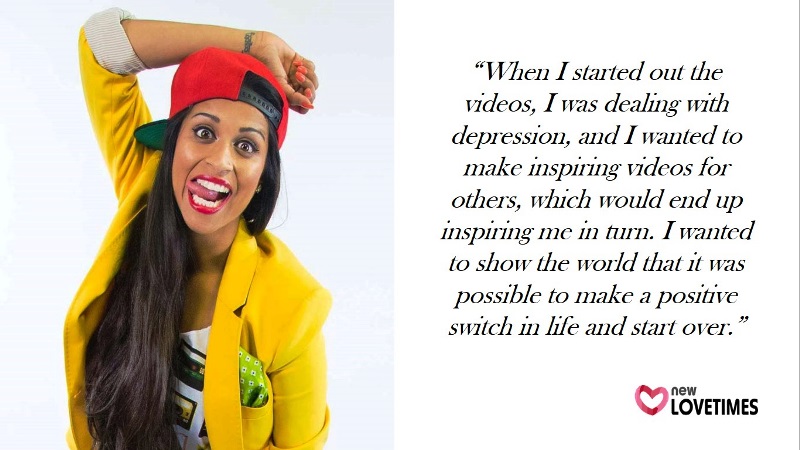 Suggested read: 11 hauntingly beautiful Cheryl Strayed quotes that will reverberate with the free-spirited YOU The last of these Lilly Singh quotes is the most iconic. Lilly swears by work, and is known to be a ‘Hustler’ who does not give in. Her vlogs constantly remind the viewers to “hustle hard” and achieve each one of their dreams.

The best thing about Lilly is her humility. Despite earning 2.5 million dollars a year, she has always been as rooted as ever. Her videos are that one bright spot in the dullest of days, and we hope these Lilly Singh quotes help your hustle, Unicorn.

“One love, Superwoman, that is a wrap. And, zoooop.”

Article Name
15 Lilly Singh Quotes That Help You Channelize The ‘Bawse’ In You
Author
Meghalee Mitra
Description
Her videos are that one bright spot in the dullest of days, and we hope these Lilly Singh quotes help your hustle, Unicorn.