Chimamanda Ngozi Adichie would introduce herself as a “happy African feminist”, three words, her neighbours would say, didn’t fit in the same sentence.

She’s a Nigerian woman, who has penned several bestsellers like Americanah and Purple Hibiscus. In her Ted Talk ‘The Danger of A Single Story,’ she opened up about her childhood, claiming to have been brought up on the Western concept of living, so much so, that at a later age, her professor called her novel ‘not authentically African’. Like racism, and the misperceived notions of various countries, she feels very strongly about the issue of feminism. Having been called one at 14 years of age, she has set the stage for what could be a Feminist Revolution.

Suggested read: 25 sassy quotes for women who rule like a #BossBi*ch

Here’s a list of Chimamanda Ngozi Adichie quotes to stir up the brigade: 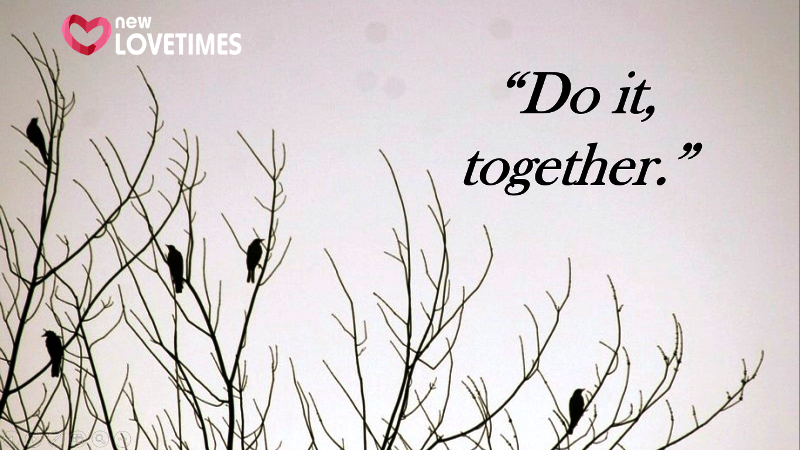 Feminism is not about glorifying one sex. That is exactly what we’re trying to fight. It isn’t about how I am better than you, but how we are bigger than the council that tells us apart; greater than the society that finds me the lesser for my lack of testosterone. We are not trying to win the race against men, but establishing that it’s time we step out from the sidelines, and run the race together.

2. “The problem with gender is that it prescribes how we should be, rather than recognizing how we are.” The process of socialization works in mysterious ways. The right of choice, is the primary tenet of freedom and we’re hell-bent on stealing it right from the womb. I watch girls being showered with dolls, and boys being stationed in front of a Hotwheels set, and yet nobody notices how they eye each other’s toys. It may not seem like a big deal, but the ‘choice of toy’ swiftly changes to the ‘choice of a husband or a career’ and out of habit, they forget that a woman thinks too.

3. “Teach her to question language.” 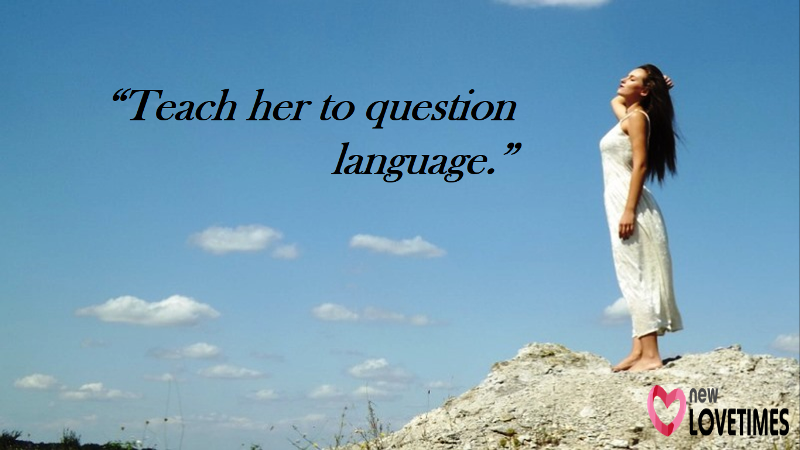 In her Ted Talk ‘We Should All Be Feminists’, Chimamanda Ngozi Adichie quotes a popular saying in the Nigerian households: “I did it for peace in the marriage”. She observed that while men used the phrase for something as trivial as missing football matches, the women generally gave up more significant things like their career. The language of marriage, according to her, has been marketed as one of ‘ownership’ instead of ‘partnership’, where ‘respect’ is something only a woman has for a man. We have to start redefining our words if we hope to escape the lies that have been internalized into our very system.

4. “Never speak of marriage as an achievement.” 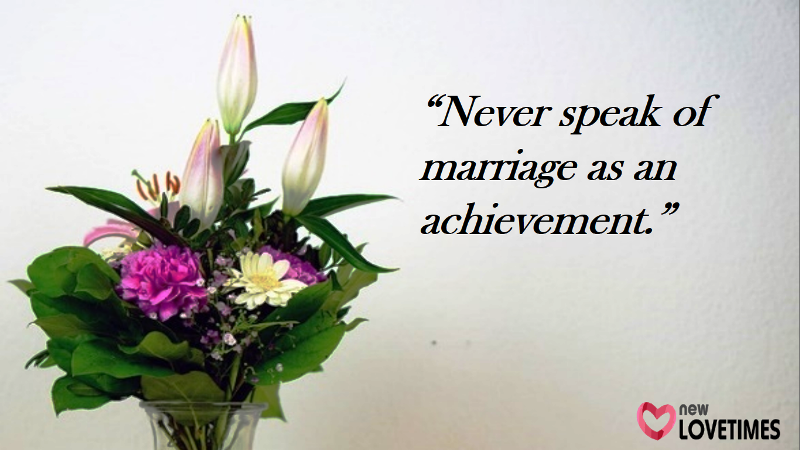 In Austen’s Pride and Prejudice, she has mocked the competitive arrangement of marriage. Even today, when a woman gets married into a prosperous household, she is hailed as though that were the only praise-worthy thing about her life. Marriage is not a necessity, or a means to enhance social standing. Being a single woman, or a spinster does not make you a witch, irrespective of what folklore has established. Several housing facilities all over the world do not allow apartments to be rented by unmarried, single women.  If I wanted to compete, I’d do it on a race track, or in Mario Kart, not under the weight of a 100kg lehenga mumbling rituals I don’t even understand. If I had a penny for the number of times people have used the culture-card to be racist, sexist, anything-ist, I’d be rich enough to buy a mile-long tape to shut them up. No, it is not okay to look down on ‘black’-skinned people because your culture is LITERALLY the brand-ambassador for Fair and Lovely. No, it’s unacceptable to force your mother to stay at home because it’s your ‘family policy’. Your ‘family policy’ also wants you to eat broccoli for every god-damn meal. Listen to that, instead.

6. “I knew that because I was female, I would automatically have to prove my worth. I was worried that if I looked too feminine, I wouldn’t be taken seriously.” Here’s the thing. When I go shopping, it’s enough that I have to keep my weight, shape, height, skin complexion, etc, in mind, to find a piece of apparel that makes me look human. Do not expect women to bring up their ancestry in the Trail Rooms, trying to figure out which pattern or accessory would help them get their point across. There are only two devices one needs for that: her mouth, and your ear. That should amply suffice.

7. “They grow up to be women who have turned pretense into an art form.” 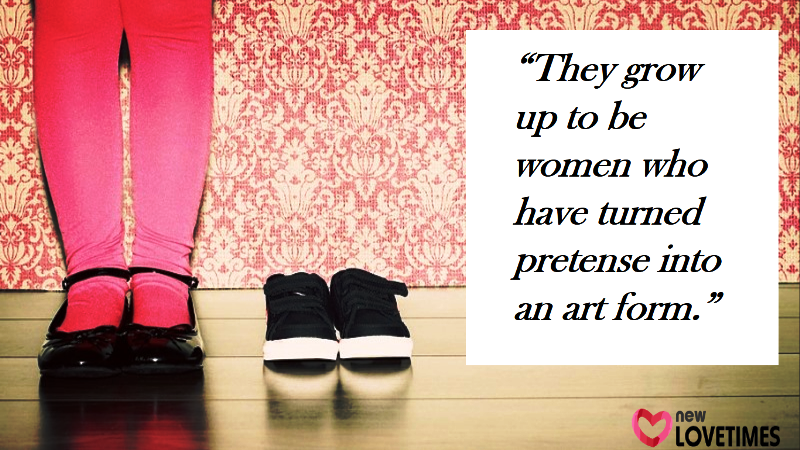 As I grew up, I almost never found my mother around during family feuds. It’s like she’d disappear during the storm, and come back perfectly composed as though nothing had happened. I later discovered that she’d lock herself away and cry, ensuring that nobody heard her. It is, of course, blasphemous that a woman should have emotions. The question is: What do we have to lose if we stop pretending? Irrespective of the casualties, you’ll gain yourself in return.

8. “We spend too much time teaching girls to worry about what boys think of them. But the reverse is not the case. We don’t teach boys to care about being likable.” I remember how, as a teenager, our choice of music, clothing, personality, so forth, were determined by the men we tried to impress. We were never our own person. As an adult, in every lingerie-shopping spree, women rarely ever purchase an item because they like it. The choice is always, subconsciously, their partner’s. And, it’s a mighty dangerous thing to carry somebody else’s mind inside yours.

Suggested read: 20 quotes by Beyonce that teach all women to be warrior princesses

9. “We raise them to cater to the fragile egos of men, we teach girls to shrink themselves, to make themselves smaller.” 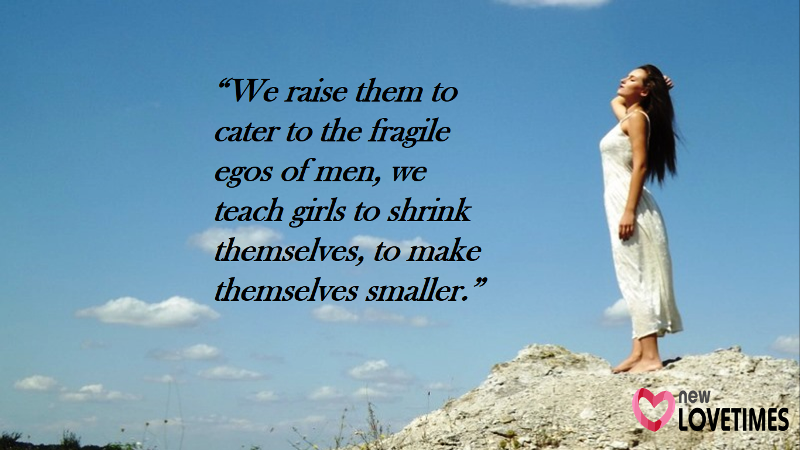 Lily Myers performed a deeply insightful piece titled ‘Shrinking Women’, chronicling how men grew larger with age, and women, smaller. It’s almost as though they were laboring to take up as little space as possible, simply because they didn’t deserve it. My elementary teacher once told me: “Women have to carve out their place in the world. It’s hardly ever handed to them. But after all the toil and name-calling, the insults and disappointment, it will be worth it.”

10. “We say to girls: You can have ambition but not too much. If you’re the bread-winner in your relationship with a man, you have to pretend that you’re not.” 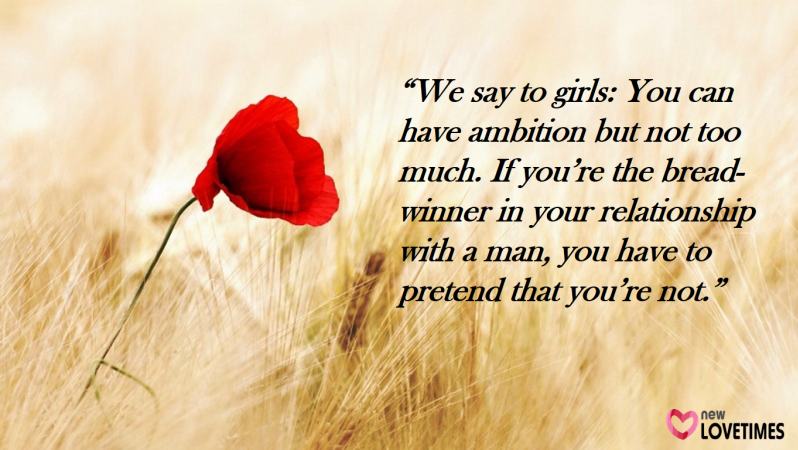 If you’re as good as your partner, you mustn’t say it.
If you’re better than your partner, you must teach yourself that it’s a lie.
As women, even if the ‘man of the house’ is out of a job, and you are the one bringing food to the table, it is still he who gets to call the shots simply because of the little thing between his legs. It’s because masculinity is worthier to society than humanity.

11. “We have evolved, but it seems to me that our ideas of gender have not evolved.” Even amongst the most ‘educated’ and ‘posh’ of us, we harbor perceptions befitting that section of the population we call ‘tribal’. We’ve evolved physically, but we cling to traditions like they’re our corner stone, refusing to believe any logic thrown our way. A woman belongs to the kitchen, and a man at work, but why that should be, has never been questioned.

12. “I want to be respected in all of my femaleness because I deserve to be.” 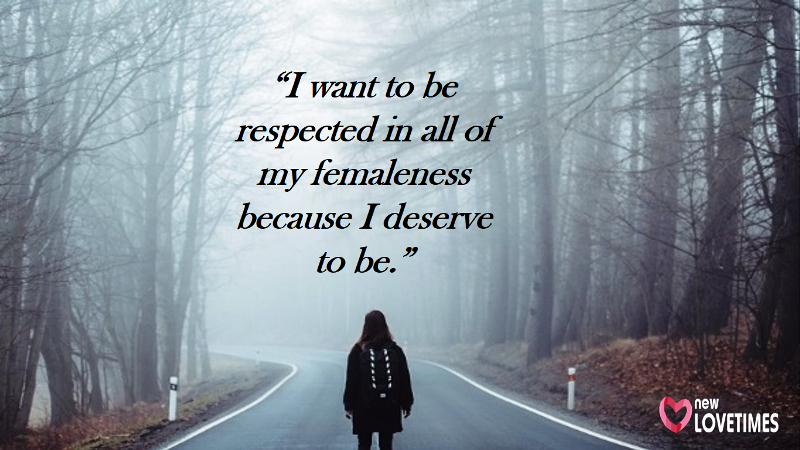 For the longest time, being a woman has felt like a crime; it felt like I’ve missed my mark and fallen to the second-best thing to have existed. Razia Sultan had to dress up like a man to be taken seriously (and not be murdered). When we see a female professor in a suit, we tend to straighten up faster in contrast to one in casual ‘feminine’ attire. Your clothes don’t make you who you are any more than the pimple on your chin, or the scar on your shoulder.

13. “Motherhood is a glorious gift, but do not define yourself solely by motherhood.” 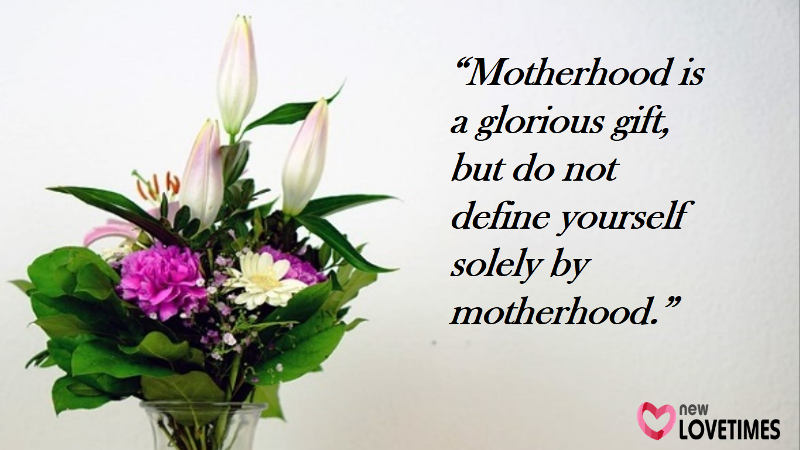 Our ‘culture’ teaches us that the primary job of a woman is to nurse a child; that her primary identity is that of motherhood. I admit that being able to give birth to a child is a miracle of nature and an enormous privilege bestowed upon a woman, but that hardly defines her entire existence. We are here because we’re human, and as for our purpose, we may not have found what that is yet, but I definitely didn’t return from a comfortable afterlife solely to change diapers and teach a toddler the ABCs. Again.

14. “Some people will bring up evolutionary biology and apes… how female apes bowed down to male apes… but the point is, we are not apes.” 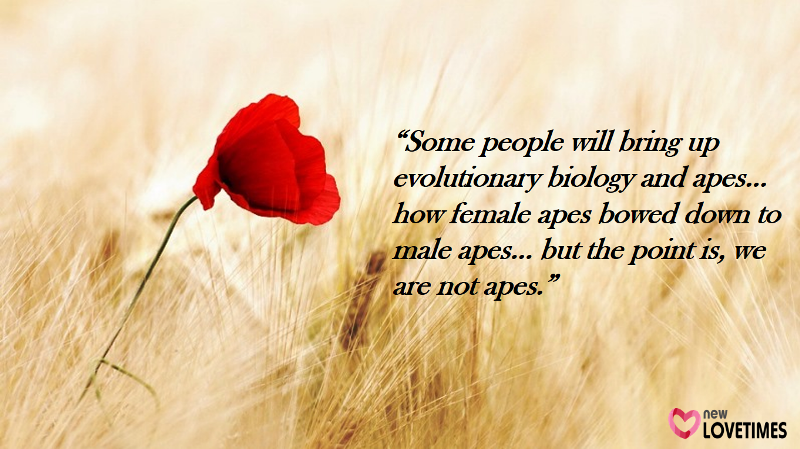 Hitler massacred the Jews brutally, in concentration camps. The British drew Civil Lines in India to restrict the ‘posh’ places for white-skinned people only. These are credible facts in history, yet they cease to be true today because the times have changed and so have the circumstances. My grandmother gave up her music, to serve a household. While my mother didn’t do that, she did give up her academics to start earning money. If I, and my contemporaries, were to follow what was expected of my grandmother, we’d be the only people moving backwards in time and landing in the grey spot of an otherwise colorful world.

Suggested read: 15 kickass Hedy Lamarr quotes which show her as the perfect combo of beauty + brains

15. “I have chosen to no longer be apologetic for my female-ness and my femininity.” 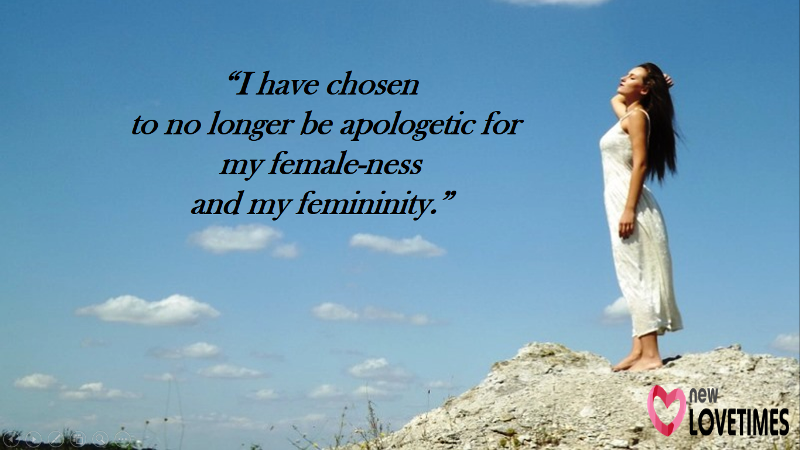 We hope these Chimamanda Ngozi Adichie quotes did enough to stir that feminist within you. In a world, where illogical arguments prevail, where you’re shamed for how you look or behave, where you’re trained to put everybody else before yourself, take a stand for the 52% of the population that’s waiting to be told:

“Vaar tujh par jo koi karey, ek haath ho aagey badha..”
(If somebody attacks you, my arms will have already extended to shield you from the blow.)

While society strives to make you fall out with your inner self, fall in with each other. Stand together, and use ‘feminine’ as your war-cry.